I flew into Nevada on a crisp, cloudless night. The air was dry here in the desert. That dry air endows landscapes with a lucid quality that's almost hallucinatory. I'd look out a hotel-room window and there in front of me would be a rugged, austere, almost lunar landscape that was totally at odds with the madcap ring-ring-ring casino frenzy.

But if you're not used to it, that dry air can wreak havoc on the lungs . . . especially the lungs of those accustomed to a moister climate. We've been writing and organizing our show coverage from the food court of the Venetian hotel. There's free (if somewhat sketchy) Wi-Fi as well as plugs for our computers, and this location makes it easy for us all to get together and work in person.

Now about that air. Not only is it dry, but it's also smoky. It seems like one person in three is smoking, and despite the heroic efforts of the air-conditioning system in the Venetian, you can feel the smoke settling in your lungs. The air doesn't smell like smoke in the same way as in a bar, but it's there all right. I'm extremely conscious of the perils of cigarette smoke, as my father died from lung cancer about 12 years ago. 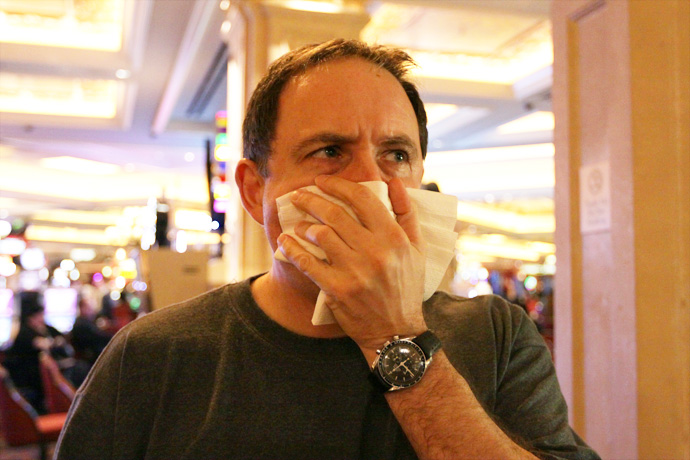 So imagine my consternation as I sat there, working on show coverage for six or so hours at a time. After two days it began to feel like I had about a pound of cat hair trapped in my lungs. After three days I developed a nasty tubercular cough and all of the fine trappings of a cold. Roger Kanno was also suffering, and Doug could feel it in his lungs. Only Jeff Fritz, who's chairman of the Rugged Guy Club (North Carolina chapter) was showing no discomfort.

People bring their kids through the casinos! For that matter, I didn't notice anyone complaining or coughing. I just don't get it.

Toronto, the town from which I hail, banned smoking in public places about seven years ago. Las Vegas needs to join the rest of the 21st century and do the same.