On the weekend of the 26th of March, 2022, a small contingent of the world’s top audio journalists and distributors were invited to witness the launch of a new SME flagship turntable, the first such launch in over 30 years. As if that weren’t enough to warm the cockles of even the most jaded hi-fi hack, we would be hearing the turntable in perhaps the most famous listening room in the world—the room custom-built by Alastair Robertson-Aikman, the legendary founder of SME, as an extension to his delightful Sussex home. Make no mistake: this is holy ground, the audio equivalent of being invited to Balmoral for a weekend of grouse-shooting with the Queen. Since his passing in 2006, even SME hasn’t used the room for listening tests, so its re-opening really was a once-in-a-lifetime event. Alastair, or A-RA as he was affectionately known, was not a man to settle for second best, and his pursuit of audio excellence led to the creation of a hi-fi dynasty revered the world over. 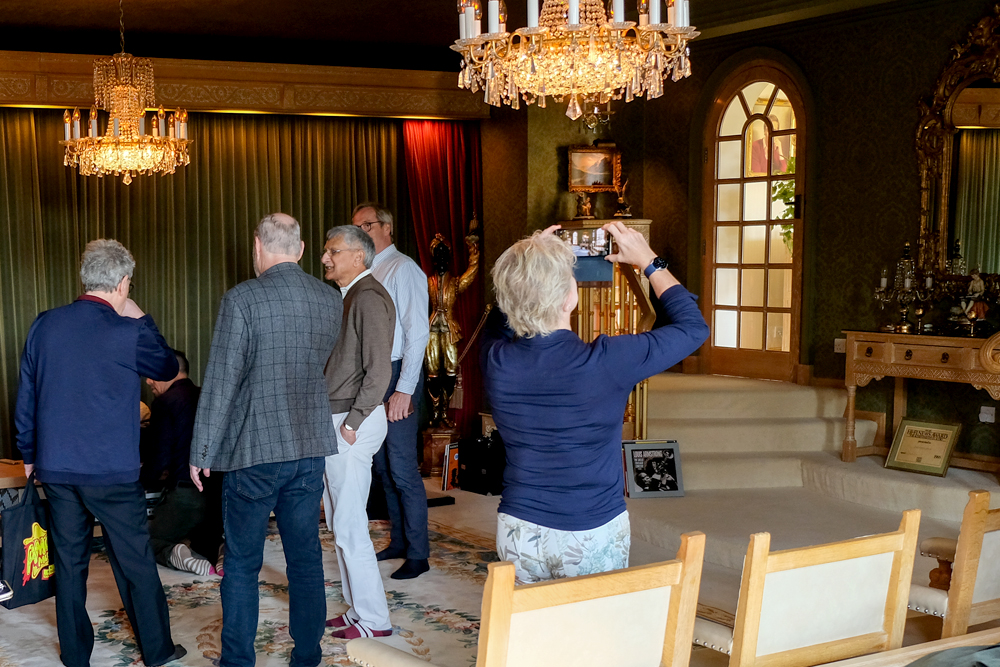 The most famous listening room in the world?

SME was founded in 1946 as the Scale Model Equipment Company and was best known in those days for manufacturing high-quality scale models. From the 1950s the firm undertook high-precision engineering work for companies such as the Hawker Aircraft Company and Rolls-Royce Motor Cars. It wasn’t until 1959, however, that the firm became involved in the manufacture of audio equipment when A-RA made a tonearm for his own turntable and was persuaded to put it into commercial production. 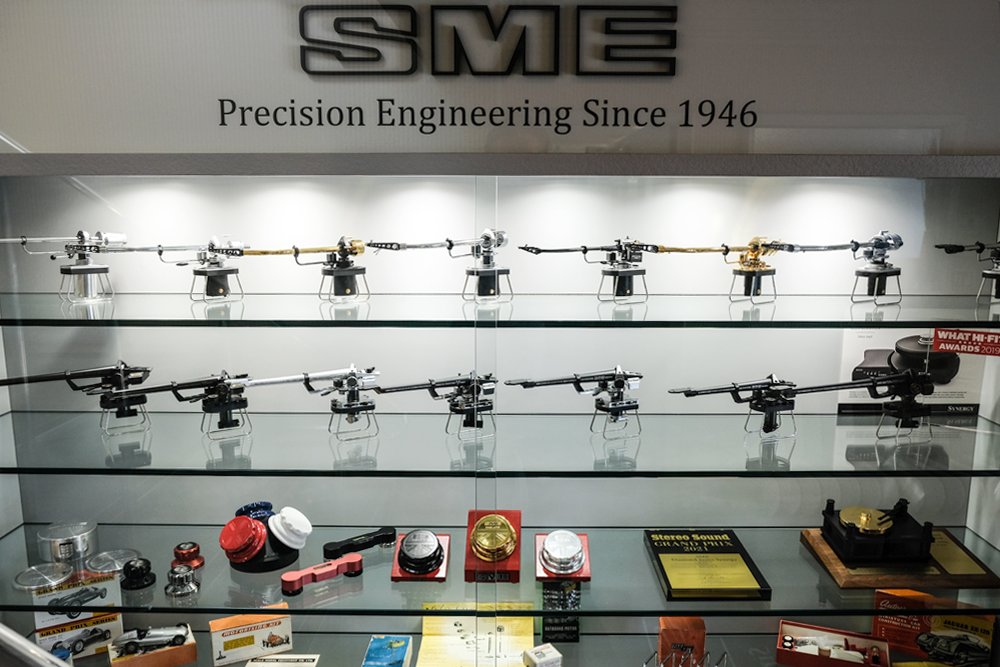 Just some of the diverse products manufactured by SME.

To say that first SME tonearm caused a sensation would be a massive understatement. The Series II followed in 1962, and the audio industry hailed SME tonearms as “the best pick-up arm in the world.” It’s a position the company has maintained despite numerous challengers to its crown, right up to the present day. A-RA built the beautiful art-deco factory that is still home to SME in the regal town of Steyning, deep in the West Sussex Downs, to manufacture his tonearms for the cognoscenti. 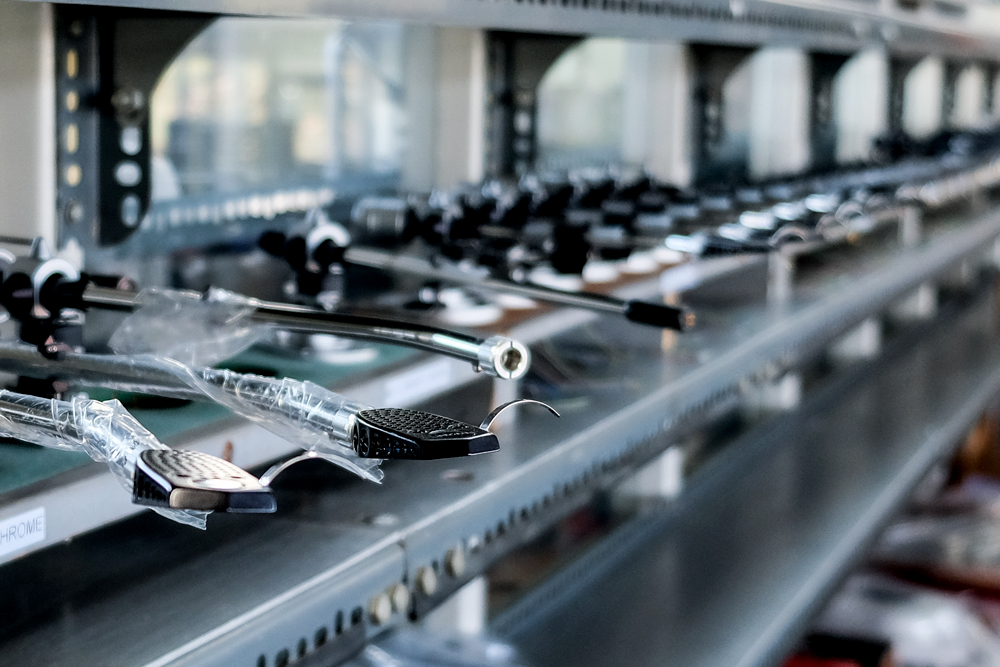 Tonearms as far as the eye can see.

In 1986 SME astonished the world with the launch of the SME V tonearm, which was cast and machine-finished from a single piece of magnesium, equipped with a huge 17mm precision main bearing, and constructed with the close tolerances and hardness usually reserved for the aerospace industry. That astonishment was nothing compared to the furore that greeted the 1989 launch of SME’s first turntable, the mighty SME Model 30, so named because it had been 30 years since SME had entered the audio sphere. At a time when it seemed vinyl was about to disappear, it felt like madness to launch a turntable that cost as much as a decent Audi. With hindsight, of course, it was absolutely the right move at the right time, and the range has since expanded to include six turntables at increasingly affordable price points.

SME continues to manufacture advanced, precision-made components for the aerospace, medical equipment, and motorsport industries, including Formula 1. One of the unique advantages this confers on SME is the ability to embrace techniques learned in these sectors, particularly Formula 1, where advanced materials are heavily utilised, and to incorporate those in audio engineering, where they offer advantages over traditional metallic designs.

With the 60th anniversary of SME’s beginnings in audio looming, the company set about creating a new flagship turntable designed to sit above the SME Model 30 in its range, and on 26th March 2022, I was invited on behalf of SoundStage! to hear it for the first time. 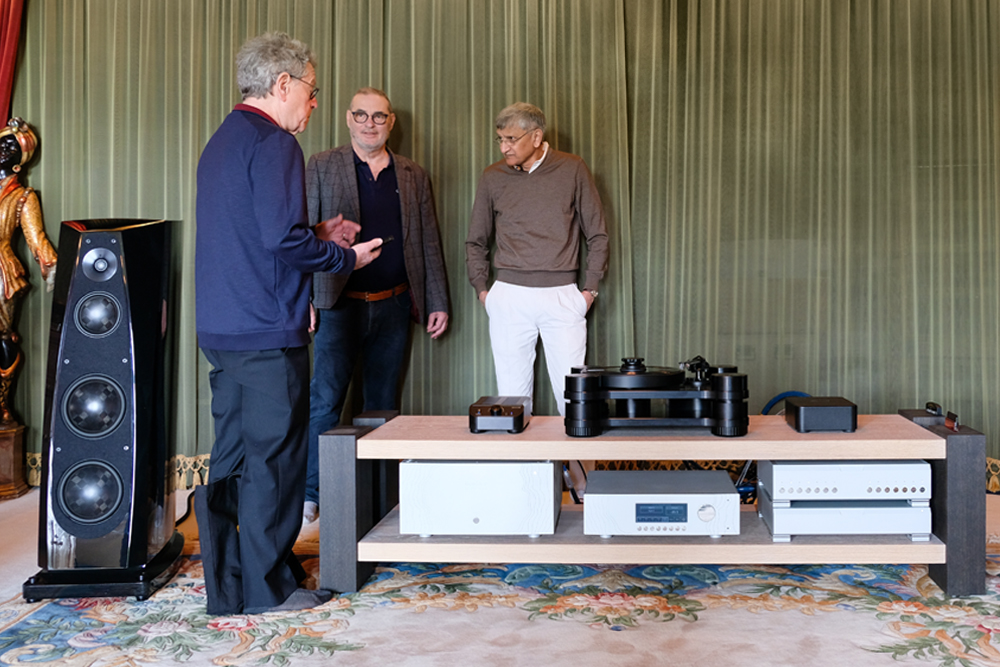 The day began with a trip to A-RA’s world-famous listening room, which was a large extension on the side of his beautiful Sussex house. The room was built on a palatial scale, measuring perhaps 50′ × 30′, with opulent décor designed to give the impression of an opera house. Theatre-style curtains surround the room to provide superb damping, bronze statues holding torches stand in the corners, two fabulously grand chandeliers hang from the ceiling, and fine Persian rugs cover the floor. The room was constructed with both reinforced walls and an unusually strong ceiling, while many tonnes of concrete were poured into the floor to ensure maximum integrity and to eliminate vibration. Awaiting the select guests, the all-new SME Model 60 stood resplendent on a custom-built table with its associated speed-control unit and separate transformer. Amplification and loudspeakers were by Boulder Amplifiers and Rockport Technologies, respectively, with exotic hawser-like cabling exclusively provided by Siltech and Crystal Cable, both now affiliated with SME. The cartridge selected was Ortofon’s Verismo high-end moving-coil design. 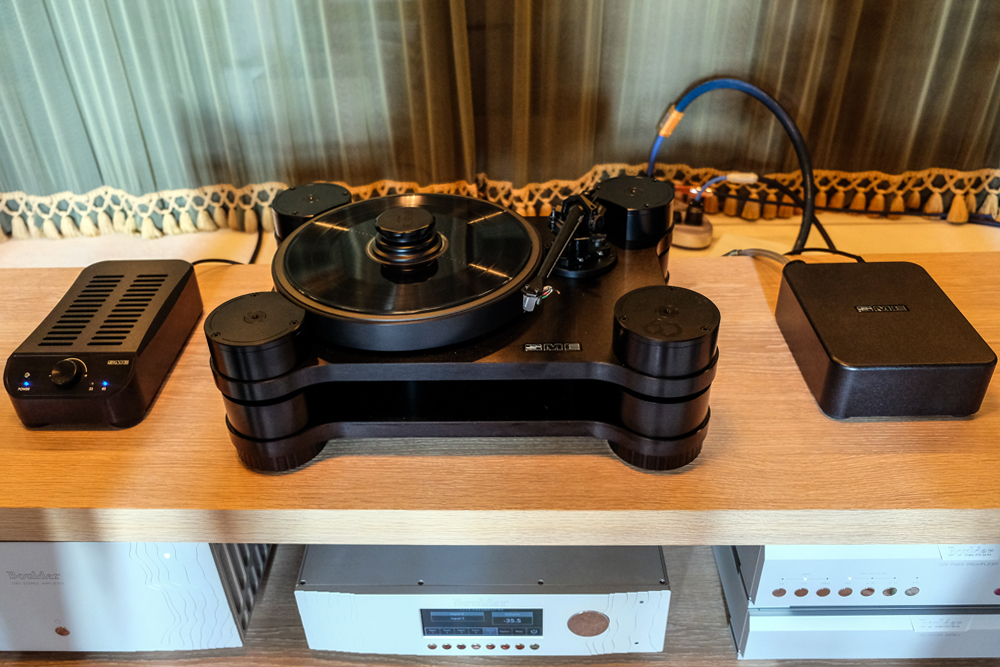 The SME Model 60 deviates from current SME design practice by completely reconfiguring the suspended suspension system, which is hidden in the massive and beautifully machined columns on each corner. As a result, the usual multiple suspension bands are no longer visible. This alone gives a far neater and less industrial appearance and confers on the Model 60 the kind of wife-acceptance factor that would be enjoyed by George Clooney coming to dinner. In addition, the suspension now incorporates not just vertical damping but also horizontal damping, again based upon the same precision band system. Seeing one of the towers stripped down put me in mind of those isolation mounts used on high-quality studio microphones, although what SME has engineered is vastly more complex. 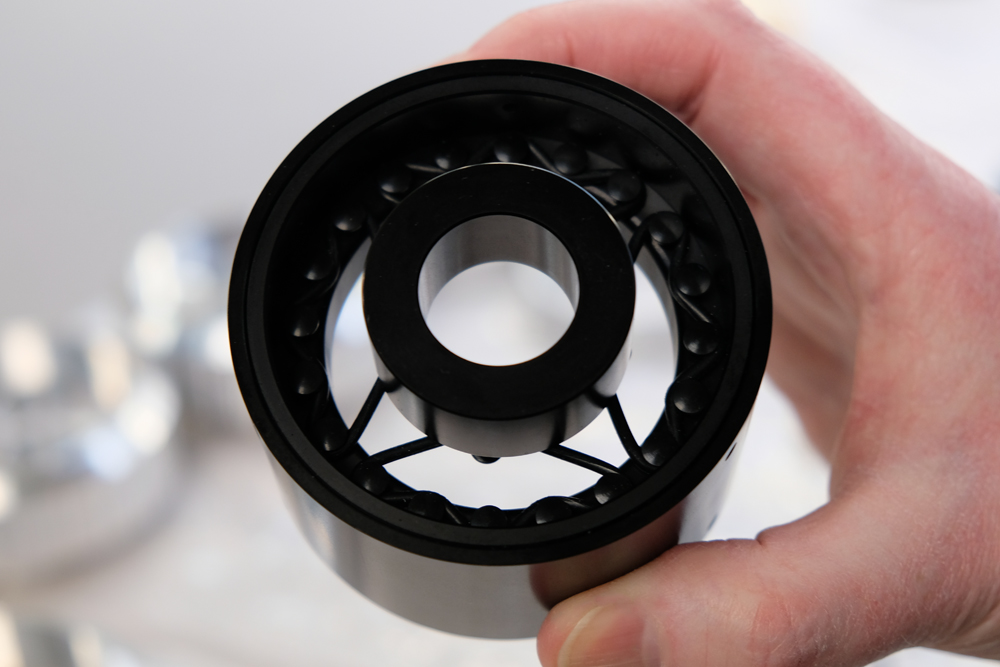 During the factory tour, SME’s CEO, Stuart McNeilis, who spent a long career at British Aerospace, was proud to show how, since becoming part of Cadence Audio, SME has invested heavily in the finest CNC machines money can buy. In addition, the electroplating shop has been totally rebuilt, and it now houses state-of-the-art facilities that enable even higher standards of finish. Despite all the high-tech hardware, some jobs, such as final polishing and finishing, are still best done by hand by the long-serving craftsmen of SME. 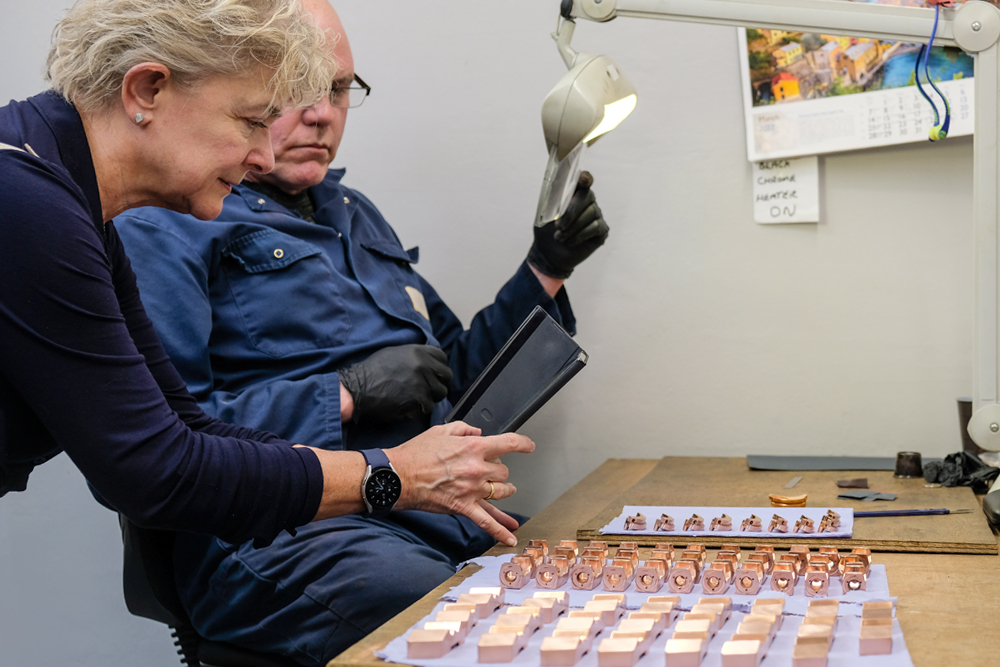 The benefits of hand polishing and finishing being explained to Gabi Rynveld of Crystal Cable / Siltech. 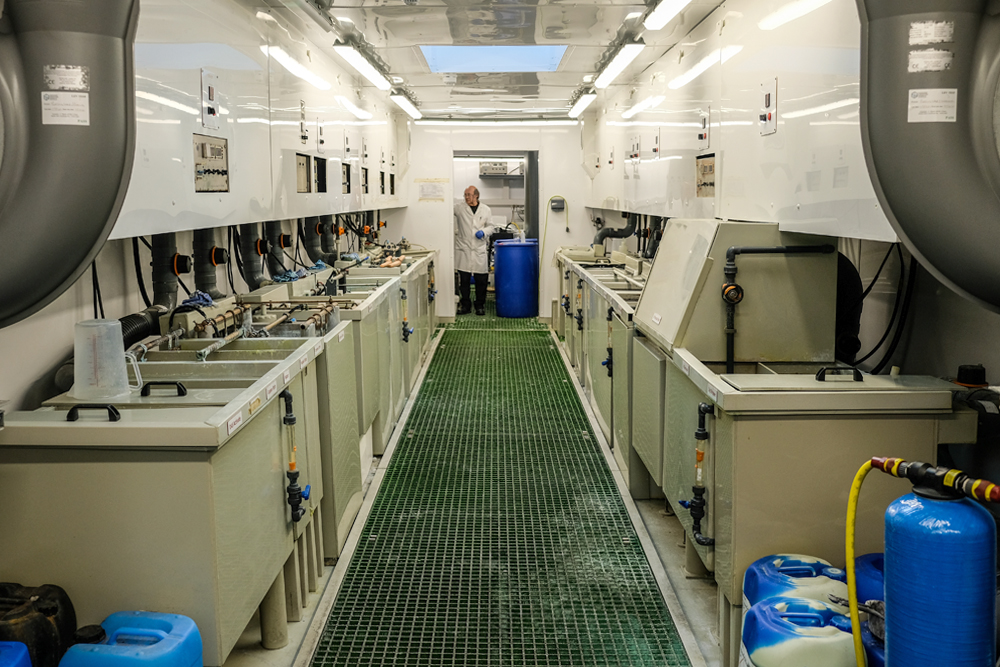 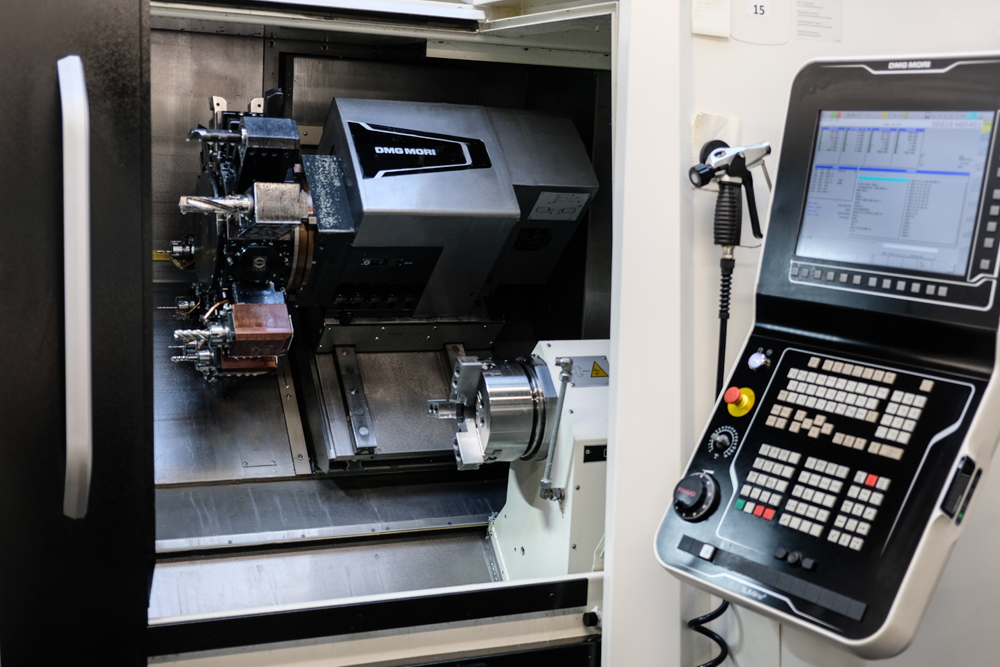 One of the new state-of-the-art five-axis milling machines.

The precisely machined aluminium sub-chassis has also been strengthened and is thicker than even that of the Model 30, eliminating the need for an additional reinforcement beam. More revolutionary still, the Model 60 comes fitted with an all-new tonearm called the Series VA (A for advanced), which strongly resembles the Series V in most respects, except for the change from a magnesium tonearm tube to an advanced-polymer resin arm tube. SME refused to be drawn on the specific material used but said it was derived from the company’s research and testing of materials used in Formula 1 and is not carbon fiber but in fact a next-generation material far beyond that. The new tube design is extremely strong, dense, and acoustically inert. The tonearm wiring comprises silver Litz wiring from Crystal Cable, from the headshell to the high-quality gold-plated RCA phono connectors mounted on the rear of the deck. This is a much neater solution than the usual arrangement of flying cartridge leads being plugged into the headshell and leaving the tonearm cables hanging loose from the base of the tonearm mounting. 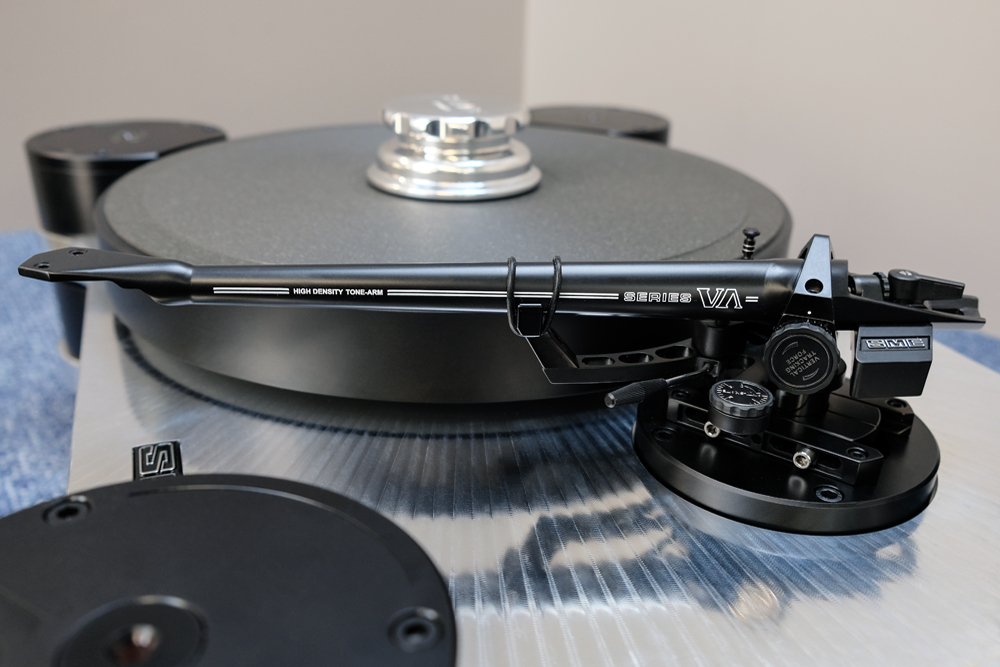 SME plans to offer the Model 60 in several finishes—a bare-metal, highly polished aluminium that takes many days of hand-finishing and polishing per turntable; standard brushed-metal (precision grinding) in anodised black or silver; or a honeycomb machined finish. The honeycomb pattern is cut into the chassis with a diamond cutting tool and can be anodised in black, silver, or blue. Prices are expected to range from £50,000 to £60,000, depending on the finish chosen and the level of machining required. 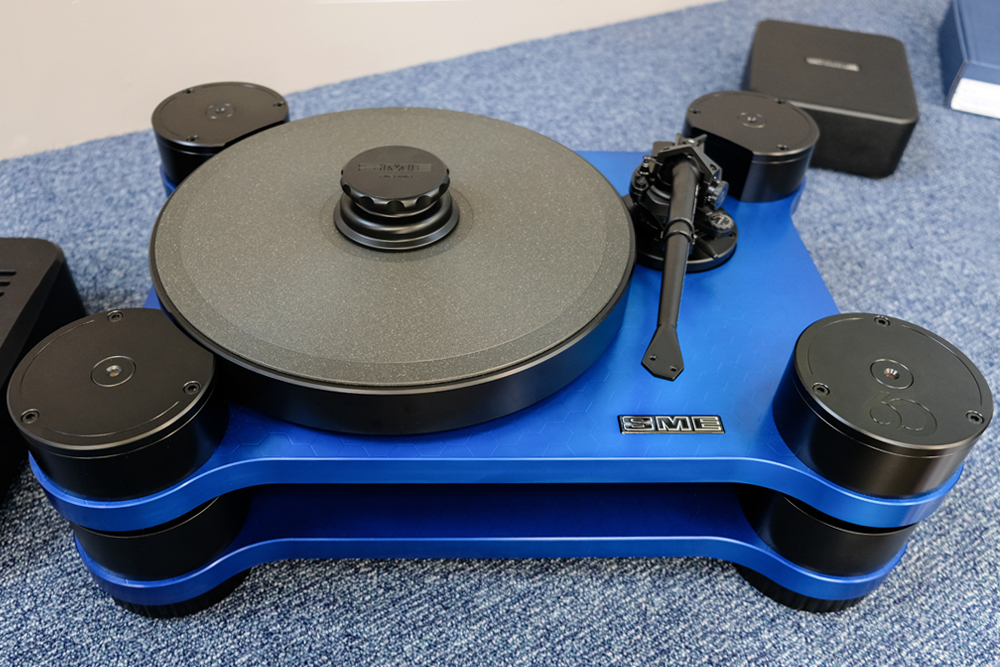 The entire turntable is built on a massive scale, with a total weight of 128 pounds. The motor unit is a new ultra-high-quality quartz-locked AC design because SME claims it can better control speed stability with an AC motor. The chassis and platter are coated with an elastomeric damping material to prevent ringing, and the platter is topped by the usual SME-machined fine scroll to provide better contact with the record when mated with the wonderfully machined screw-down SME clamp. 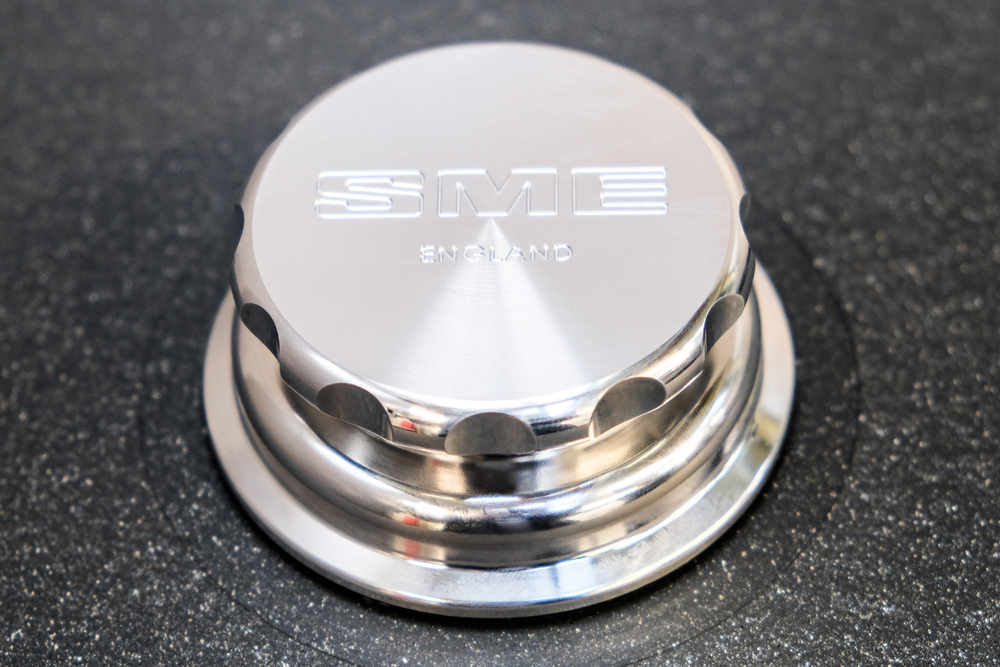 It’s always difficult to assess unfamiliar equipment in an unfamiliar room, but the sheer quality of sound was almost overwhelming. A diverse selection of audiophile vinyl was played, including “I’ve Got You under My Skin” by Peggy Lee, a simply sublime “Allegro con spirito” from Concerto de Aranjuez with Sir Neville Marriner conducting the Academy of St Martin in the Fields, and some fine jazz courtesy of the Kenny Dorham Quartet performing “Lotus Blossom.” Sonically, the SME Model 60 sounded exquisitely neutral and unforced, with prodigious but stunningly controlled and powerful bass. There was no sense of shrillness or harshness, but the level of detail retrieved was jaw-dropping. Palpable placement of the band and its players was quite simply the best I’ve heard, with a genuine sense of witnessing a live performance. In short, this was probably the finest system I have ever heard, and I think all of us who witnessed the launch could have stayed there all day blissfully playing records. 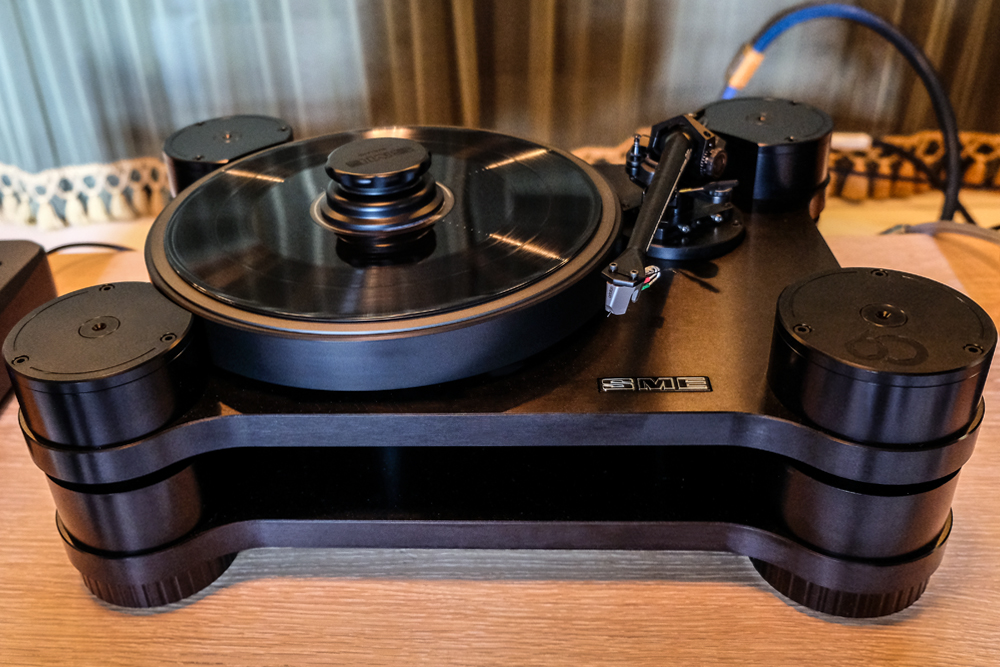 The Model 60 represents a quantum leap over existing SME products in terms of design, machining tolerances, materials, and performance. Happily, it manages to achieve this while retaining the craftsmanship, heritage, and understated British elegance that have made SME the stuff of dreams. Hearing it in that room made me feel the same soaring pride that I used to feel when Concorde flew over London with the Red Arrows. How fitting, then, that it is the creation of a company with such an auspicious history in both audio and aviation. Break out the union jacks and the bunting. A-RA would be proud.