On the evening of August 20, 2019, I attended an event at Georgia Home Theater in Marietta, Georgia, at which MartinLogan previewed seven new loudspeakers in its Motion series. The revamped Motion series includes two stand-mount models, three floorstanders, and two center-channel speakers.

They’ll be officially unveiled on September 6, at the Rocky Mountain Audio Fest in Denver, Colorado. The event at Georgia Home Theater was the first of four previews being held at major MartinLogan dealers in the US. Shipments begin in October.

The models in the new series have the same designations as the models they replace, but with a lowercase “i” added. Does the “i” stand for incremental? The changes in the new series are “mostly aesthetic,” confirmed Devin Zell, marketing manager for MartinLogan. 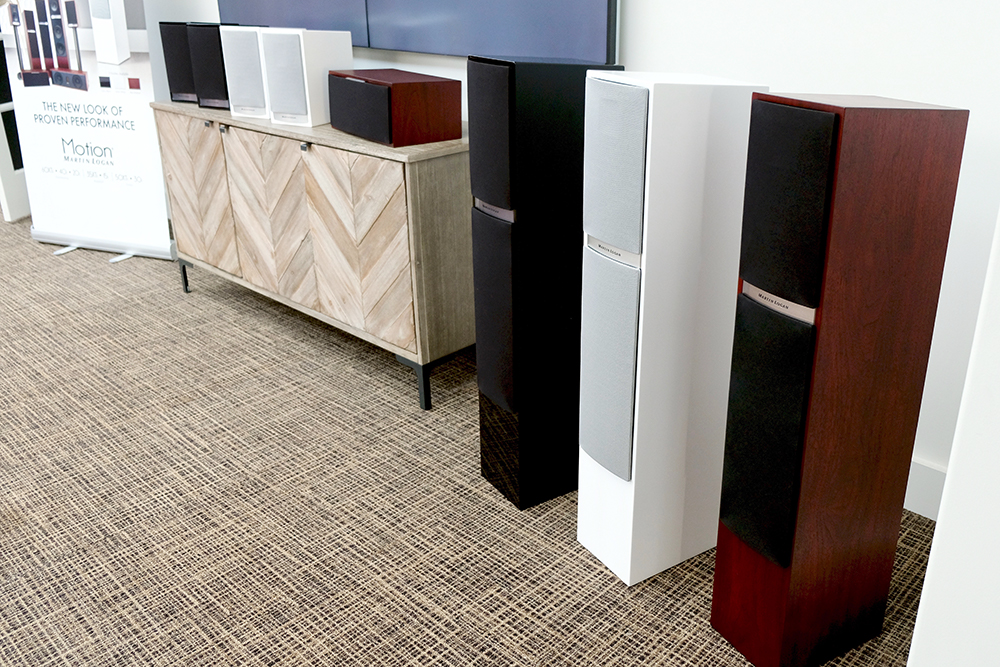 From left to right: MartinLogan Motion 15i minimonitors, 30i center-channel, and 60XTi floorstanders in all three finishes

There are performance-related enhancements as well, Zell noted. The top two floorstanders have added internal bracing to reduce cabinet resonances. On all models, the woofers (and midrange driver on the two three-way floorstanders) have newly designed dust caps that add rigidity -- this reduces breakup modes, MartinLogan says.

For the most part, MartinLogan is staying with a tried-and-true recipe. All models use the Folded Motion and Folded Motion XT tweeters that have been a defining element of the Motion line ever since its launch.

Instead of creating sound with a dome that moves back and forth like a piston, Folded Motion tweeters move air by squeezing it. Aluminum circuit traces are etched into a thin-film diaphragm, which is folded up, accordion-style, in front of an array of powerful neodymium magnets. The alternating electrical signal in the traces interacts with the magnetic field, causing the diaphragm to squeeze in and out, pushing sound out into the room. 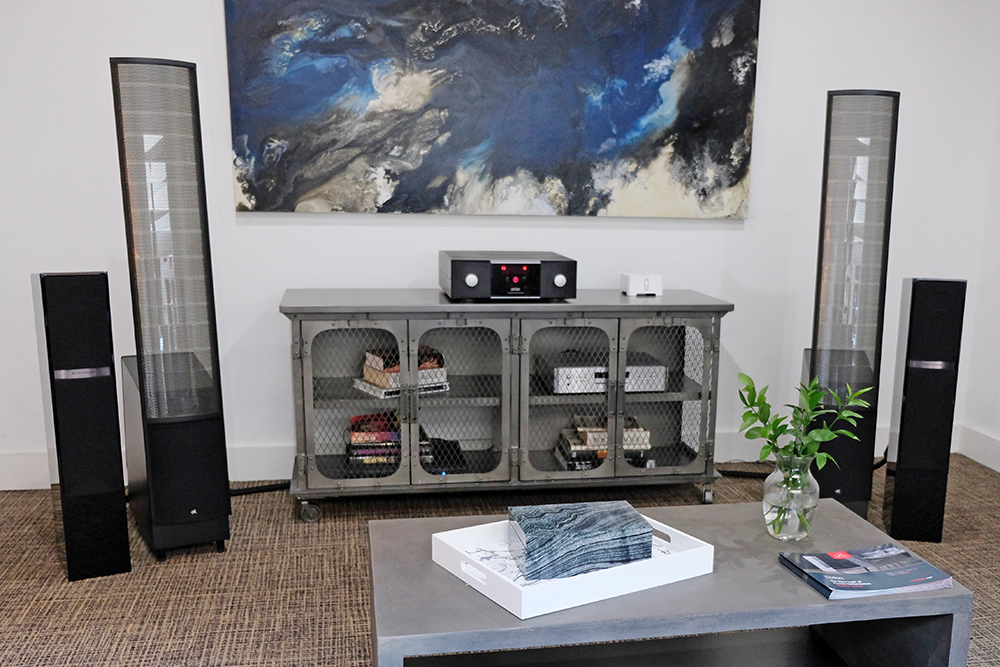 Folded Motion tweeters have much larger surface area than dome tweeters, so the excursions required to produce a given SPL are correspondingly lower. This results in lower distortion, the company says. Mass is also lower, so transient response is faster, MartinLogan adds. Dispersion is narrower, reducing the effect of floor and ceiling bounce, wherein reflections from room surfaces interfere with direct sounds, causing unevenness in midrange response.

The three floorstanders all have woofers mounted toward the bottom of the front baffle, to mitigate the effects of floor bounce. The Motion 20i ($849.99 each) is a 2.5-way design with a Folded Motion tweeter and two 5.25" aluminum woofers. The lower woofer operates from 500Hz downward, while the upper woofer is crossed over to the tweeter at 2.6kHz. The Motion 40i ($1099.99 each) is a three-way design, with two 6.5" woofers, a 5.5" aluminum midrange, and a Folded Motion tweeter. At the top of the range is the Motion 60XTi ($1599.99 each), with a Folded Motion XT tweeter, a 6.5" aluminum midrange, and two 8" woofers. 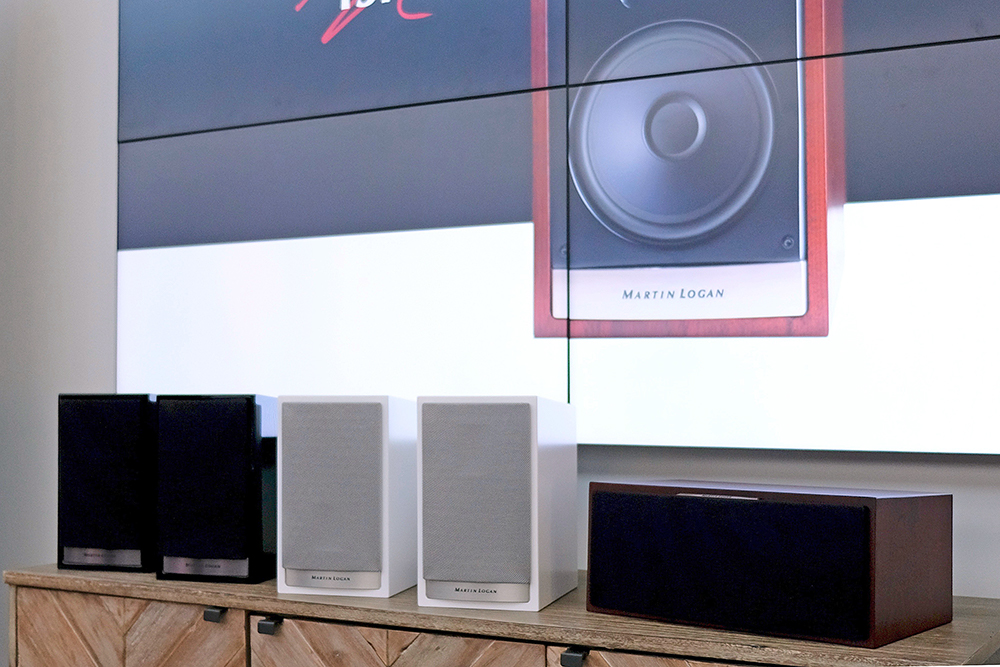 MartinLogan 15i minimonitors and 30i center-channel

There were no formal presentations at the event. It was essentially a meet-and-greet affair where Georgia Home Theater’s clients could enjoy a beverage and some nibbles, and check out the new range.

Georgia Home Theater’s roots go back to 1989. In its original incarnation, it operated as LaserDisc Enterprises -- a mail-order retailer of LaserDiscs. Its areas of business now include home theater, high-performance two-channel audio, multi-room audio, home automation, outdoor entertainment, and smart lighting. Georgia Home Theater has two large showrooms, one in Atlanta, and one in nearby Marietta, where the MartinLogan event was held. That location has been open for three years.

Totaling 20,000 square feet, the Marietta showroom is a very impressive space, but also very welcoming. The doors open into a vast showroom, with individual demo rooms off to the side. Adjacent showrooms, one on each side of the building, are dedicated to Crestron and Control4 home automation. Outside, there are five outdoor entertainment zones.

For audio, Georgia Home Theater carries some imported brands, including Bowers & Wilkins and Monitor Audio. But most of the showroom is devoted to iconic American brands, such as Klipsch, Mark Levinson, McIntosh, and of course MartinLogan. Arrayed throughout the showroom are posters of and books about the great bands of the 1960s and ’70s -- Led Zeppelin, the Rolling Stones, Pink Floyd, the Beatles, and others. Georgia Home Theater’s core customers are clearly boomers who have done well for themselves.

While the ostensible reason for the event was to preview the new Motion-series speakers, the star attraction was MartinLogan’s flagship electrostatic speaker, the Neolith ($80,000/pair), finished in candy-apple red. At any given time, there are only nine pairs of Neoliths on display in the entire US. The Neoliths were demoed in Georgia Home Theater’s main showroom, along with Mark Levinson electronics. They filled that huge space effortlessly, with sound completely divorced from the speakers. 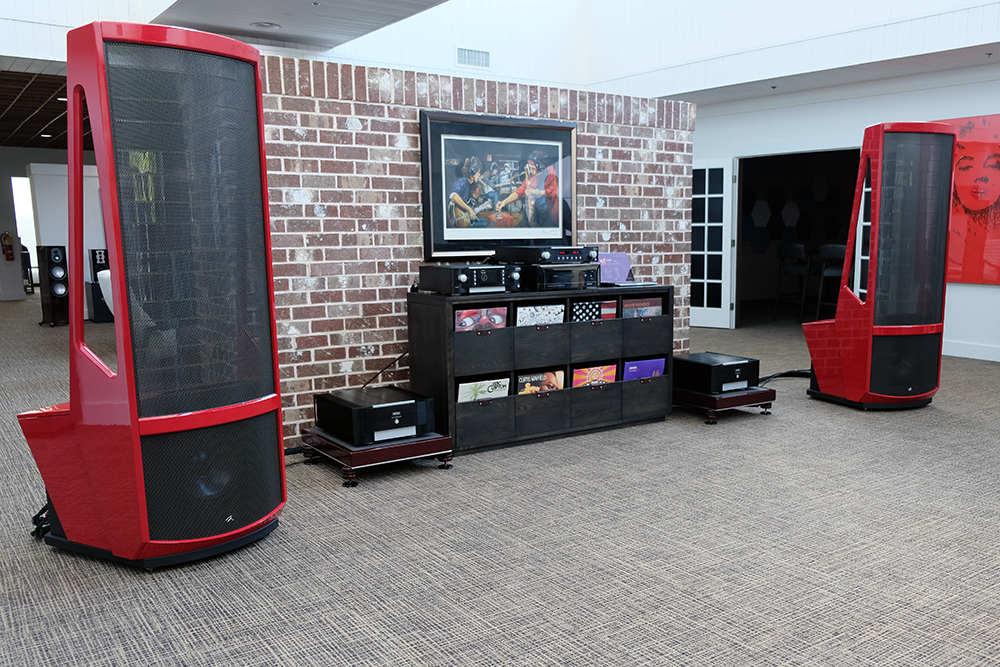 The Motion 15i bookshelf and Motion 30i center-channel speaker were on static display on a table on the right side of the showroom, below a screen running a slideshow on the new series. To the right of the table were three Motion 60XTi floorstanders, one in each finish. Other MartinLogan speakers, including hybrid electrostatic speakers and Motion-series speakers, were on static display in the main showroom, and in demo rooms off to the side.

There were two active demos of the Motion Series. In one room, Georgia Home Theater was running clips from the Queen biopic Bohemian Rhapsody, showing projected UHD video on a huge screen. Arrayed across the front were two Motion 60XTi floorstanders, for the left and right channels, and a Motion 50XTi center-channel speaker in the middle. Audio electronics included an Anthem AVM 60 processor and one of Anthem’s MCA amplifiers. Although the clip had a DTS-HD 5.1-channel soundtrack, no surround speakers were used for this demo.

Even without surrounds, the sound was truly impressive. In the scene in Madison Square Garden, where the band plays “We Will Rock You,” the audience’s foot stomps sounded big and powerful. In the climactic Live Aid scene in Wembley Stadium, guitar, bass, drums, and especially Freddy Mercury’s voice all came through beautifully.

In an adjacent soundroom, a pair of Motion 60XTi speakers were used for a stereo music demo, for which Georgia Home Theater streamed a Tidal playlist to a McIntosh C2600 preamplifier. The speakers were used in biamp mode, and driven by two McIntosh MC452 power amplifiers, each rated at 450Wpc. 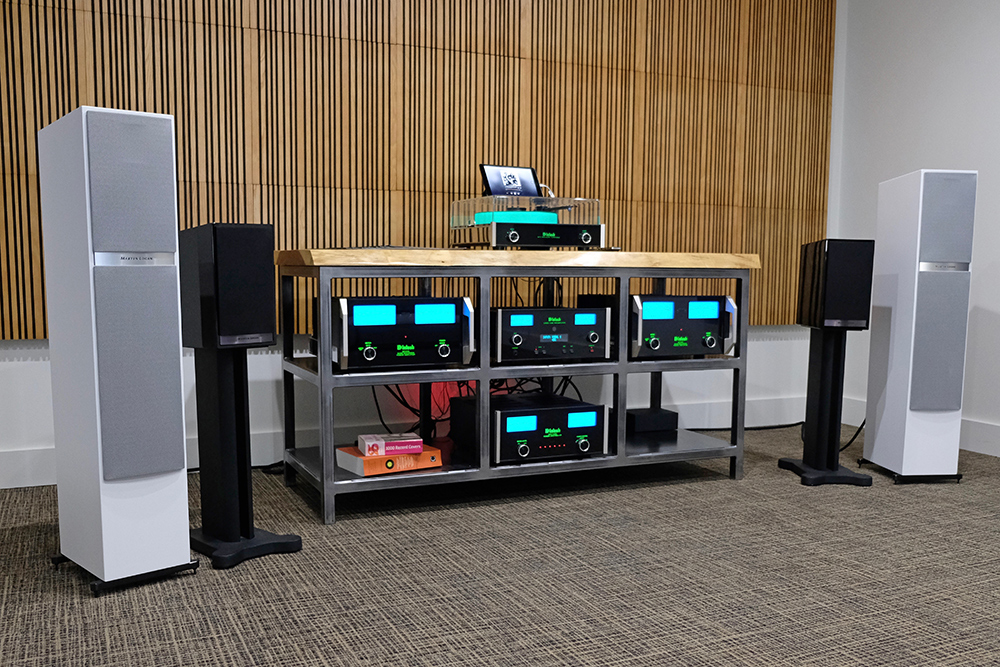 “I Don’t Care Anymore,” from Phil Collins’s 1982 album Hello, I Must Be Going! (MQA, Virgin/Tidal), sounded big yet effortless. Played through the Motion 60XTi speakers, Collins’s drumming had huge impact with impressive control. Drums and percussion were likewise explosive in “He Wasn’t Man Enough” from Toni Braxton’s 2000 album The Heat (16/44.1 FLAC, LaFace/Tidal). These speakers can definitely party.

If you want something more sedate, they can oblige there, too. I loved the way these speakers produced Sara K.’s smoky, sultry voice in “Brick House,” from her album Hobo (16/44.1 FLAC, Chesky/Tidal). The string bass solo that opens the track sounded really tight and deep, and the bongos that punctuate the track had a fabulous woody snap. The attacks of Ottmar Liebert’s “nouveau flamenco” guitar, playing “Starry Night (March of Kings)” from Poets & Angels (16/44.1 FLAC, Higher Octave Music / Tidal), were nigh-on perfect, fast but beautifully rounded.

In its press release announcing the new series, MartinLogan said it had “decided not to mess with a good thing.” So it’s probably good that most of the changes to the new series were incremental.