The Venture Xtreme is an enormous four-way design with drivers placed seemingly everywhere on its extremely large sides. If you’re wondering how so many drivers can blend so that they sound as one, don’t worry about it any longer -- they don't. The Xtreme filled the enormous room with plenty of sound, but it was all a mess. There was no coherence between the drivers, no consistency between different listening positions in the room, and absolutely no quality in terms of the sound. It was like a giant P.A. system. 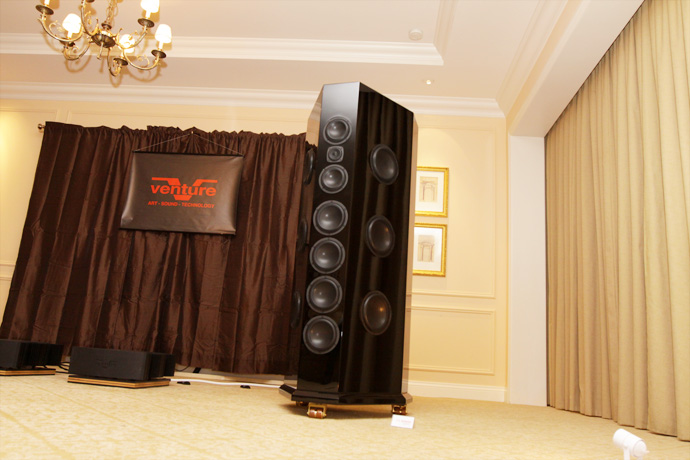 People say you can't necessarily judge the sound of a system under show conditions due to subpar rooms, so it might seem like I'm being unduly hard. I don't think that's true. There were plenty of good-sounding systems at CES 2011, and this is a huge speaker at a high price and it deserves to be scrutinized to see if it justifies its asking price. To me, it doesn't.

What surprised me, though, is that after I finished listening to them another reviewer came into the room and asked the folks to play Talking Heads at rock-concert volumes. He really seemed to enjoy the sound, so I wouldn't be surprised to see this system get talked about positively elsewhere. To each their own -- that seems to be the nature of high-end audio these days. You know where I stand -- I'll take the condo, townhouse, or car with an inexpensive stereo system inside over the Venture Xtreme any day of the week.

Producing a great loudspeaker is about far more than making a great big one and putting a fat price tag on it. One hundred and ninety-nine grand -- come on, no way! There are companies doing far better work with their products for much less money.