While CES 2014 is home to some very expensive products, including the new EMM Labs and CH Precision mono amplifiers, which both retail for more than $100,000 per pair, I set my sights on much more affordable equipment. In the case of this article, digital-to-analog converters (DACs) under $2000. What's particularly impressive about this group is that they offer many features beyond D/A conversion, such as headphone amplification and preamplifier controls, making each far more than a simple, straightforward DAC. 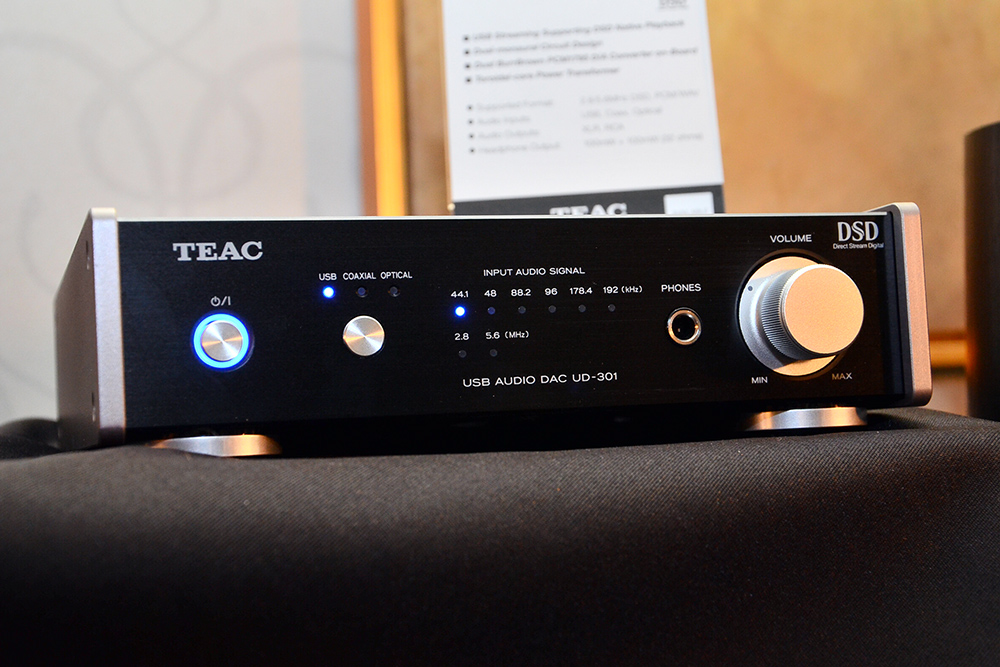 Positioned as a more cost-effective version of the company's UD-501, the new TEAC UD-301, when it becomes available in April of this year, will be housed in a simpler, less-expensive chassis that forgoes the front display in favor of LED indicators for input and sample rates. On the inside, the UD-301 is very similar to its big brother, sharing the same dual-monaural design and high-quality toroidal power transformer. Digital inputs include one USB, one coax, and one optical, while outputs are single pairs of XLR and RCA jacks. The UD-301 will be capable of streaming PCM via dual Burr-Brown PCM1795 DACs at all sample rates up to 192kHz through all of its digital inputs, but will be limited to 24-bit rather than the 32-bit resolution offered in the UD-501. It will also support 2.8 and 5.6MHz DSD over USB.

Despite being labeled as a DAC with USB capabilities, the UD-301 also functions as a headphone amp capable of supplying 100mWpc of power to your favorite headphones. The price of the UD-301 will be $499, and it will be offered in both black and silver finishes. 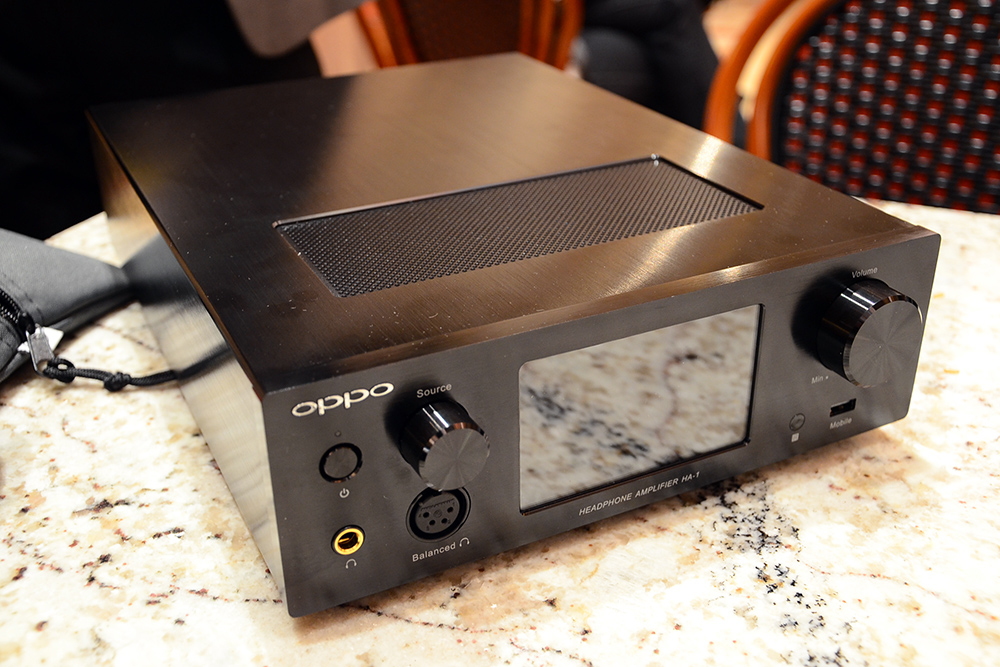 Another new headphone amplifier/DAC that I was lucky enough to get a peek at was Oppo's Headphone Amplifier HA-1. This attractive little unit makes use of the same 9018 ESS Sabre DAC as the company's BDP-105 player, and features a fully balanced, class-A headphone amplifier. Both XLR and standard full-size headphone outputs are provided on the front, while your choice of XLR or RCA analog inputs are provided around back. Digital inputs include one AES/EBU, one coax, one optical, and one USB. The circuitry is said to be fully balanced, and is housed inside an aluminum chassis. 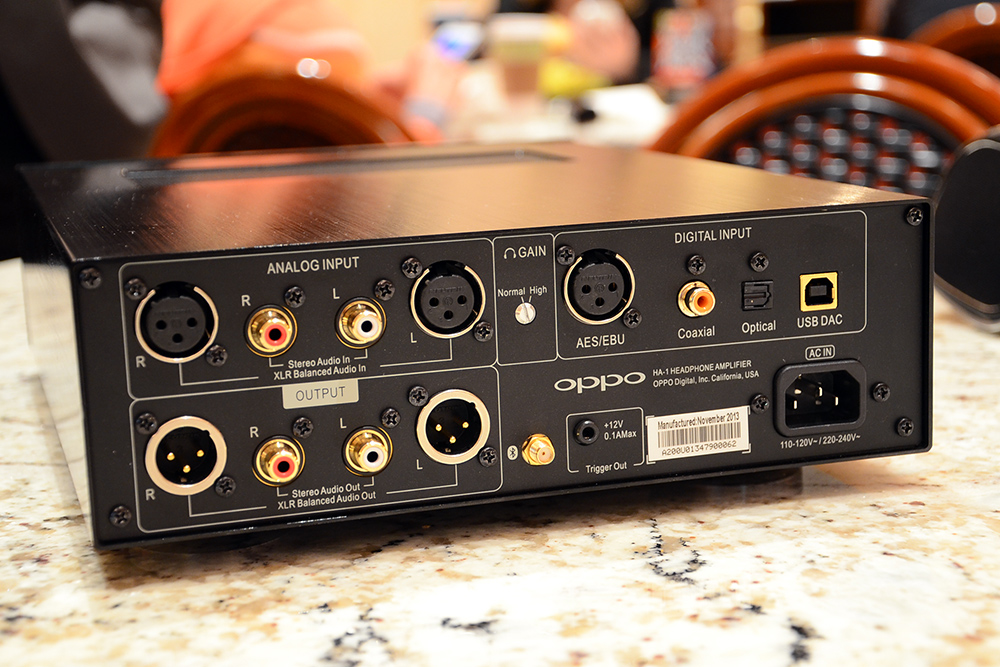 One of my favorite aesthetic features of the HA-1 is its full-color front-panel display, which illustrates menu options and source selection as well as VU and spectral meters. Volume control is fully motorized, and you can change it either by hand or the supplied remote. Although more technical information was not available at the time of the interview, Oppo reps said that the HA-1 is expected to be available in the second quarter of 2014, and will be offered at a price "around" $1200 with a two-year warranty. 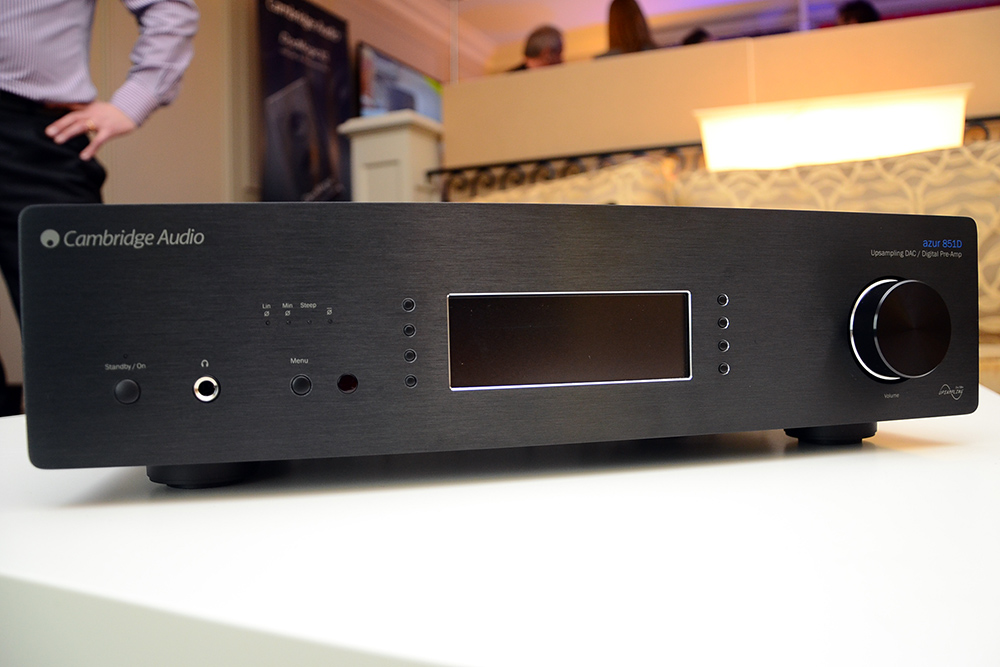 Coming in at just under $2000 was the new Azur 851D digital preamp/DAC from Cambridge Audio. The 851D struck me as somewhat of a purist's audio product despite it being so capable. It is fully digital from input to output no matter what function it's performing, with the exception of supplying analog signals to either the rear XLR or RCA analog outputs, or while supplying an analog signal to a pair of headphones.

Packed inside the all-metal chassis of this new piece are a host of features including Cambridge Audio’s effective ATF2 upsampling. When active, ATF2 upsamples all incoming signals to 24-bit/384kHz while maintaining ultra-low levels of jitter by use of proprietary, second-generation Adaptive Time Filtering (ATF) algorithms. The DACs employed are twin 24-bit Analog Devices AD1955s, and an audiophile-grade toroidal transformer delivers power. There are also selectable digital filters for alternating between linear and minimum phase. The 851D comes in both silver and black, and is available now at only $1649.