On November 17, 2015, the Bang & Olufsen company celebrated its 90th anniversary by releasing what, when I first saw a picture of it, looked to be one of the stupidest loudspeaker designs ever created -- the BeoLab 90, a fully powered, DSP-controlled transducer featuring more than a dozen drivers pointing this way and that, no doubt intended to splay sound all over the room. It’s priced at $80,000 USD per pair. I’ve long liked 360-degree-radiating designs, but this looked way too out there to actually work. 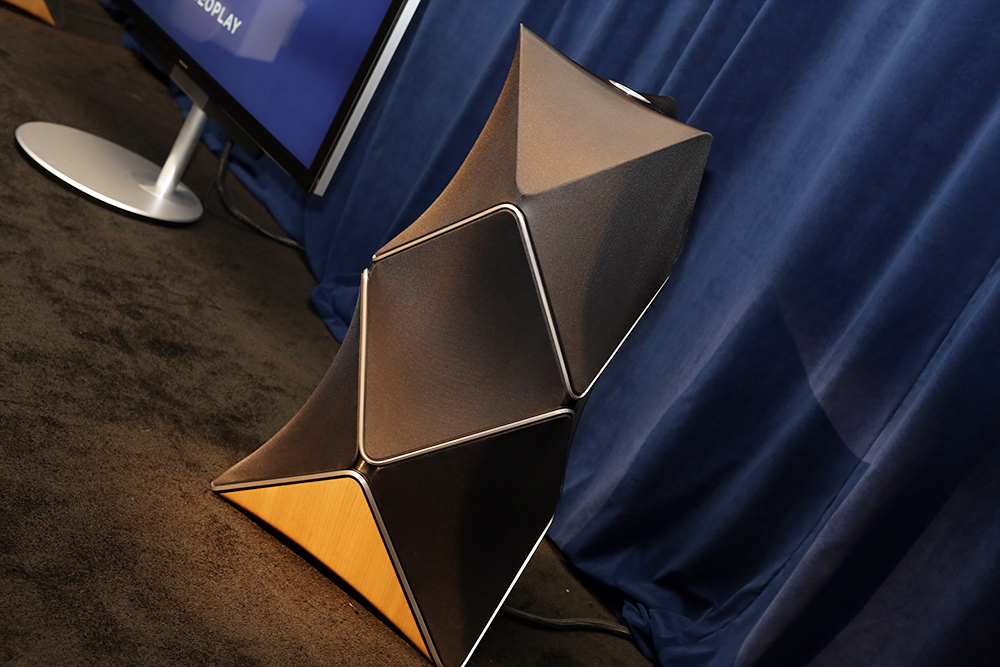 Then I found Geoff Martin’s tonmeister.ca site and began to read about the design work that had gone into the 90, and how it started as a rather conventional three-way design and eventually evolved into the final product seen today. It became pretty obvious from what he was describing that a lot of thought, research, and testing went into the development of the 90, so my mindset changed from ridiculing it to wanting to learn even more about it. Geoff, a Canadian, earned his doctorate at McGill University (Montreal) in 2001, and in 2002 moved to Denmark to work for B&O as the company's tonmeister in its acoustics department.

What I found most intriguing about the design description was not the room correction (that’s old hat now), but the claim that all those drivers and the DSP processing behind them could control the directivity of the speaker and even dynamically widen the sweet spot for listeners sitting away from the center position. That’s pretty techy stuff, and not something I’ve ever seen or heard in a high-end loudspeaker before.

Eager to hear if this crazy-looking contraption that Martin and B&O were boasting about worked, Roger Kanno and I booked ourselves into the first press conference B&O put on at CES 2016, which was at 9 a.m. on January 6. At first, the presentation was a little boring, at least for Roger and me -- reps talked about the design goals of B&O, and they unveiled a new all-in-one speaker system called the BeoSound 35, which costs $2795 and will probably be a thrill for those who want a stylish, simple music system that they can place on some surface or hang on a wall. Even though the demo of the 35 proved that it sounded pretty good, that wasn’t doing much for us -- we were there for the 90. 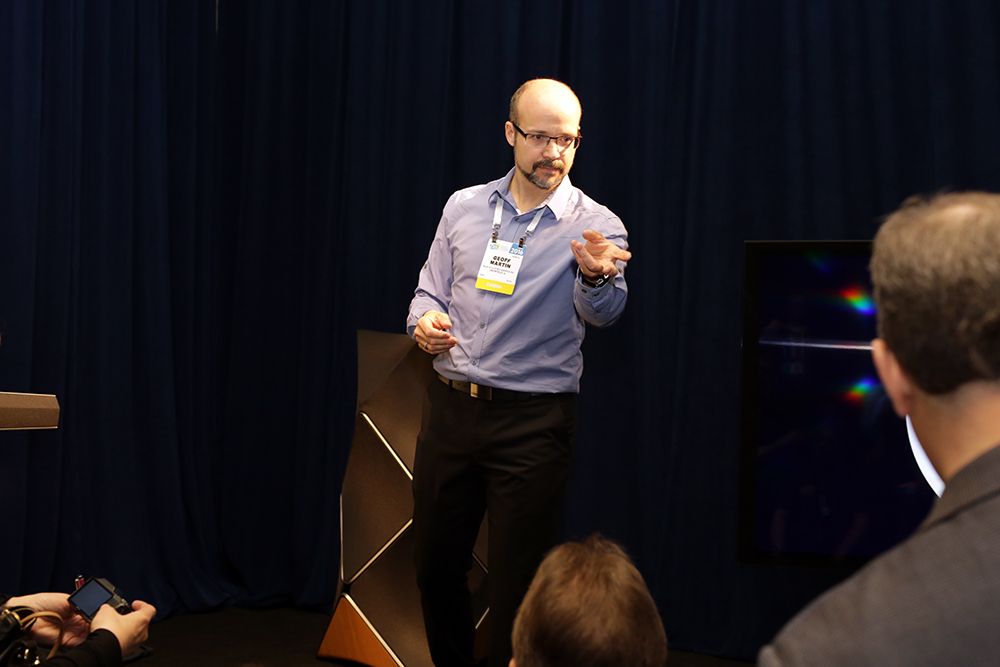 Leaving the best for last, Geoff Martin himself burst onto the scene and gave a dynamic presentation that was informative, but also deliberately short -- he wanted to make sure we listened to the system instead of just hearing about it. But before he played the 90s for the group, he told everyone that there was not enough time to demonstrate the way the speakers could widen the beam for off-center listeners; instead, they optimized everything for a central position and asked that people in the center listen through a couple cuts, then move and make room for others. He also said the design work wasn’t quite complete, but would be by the end of this month.

What was interesting about the setup is that the speakers weren’t ideally placed -- there was a wall near the left speaker and none near the right -- so even though no steering would take place, we’d still get a chance to listen to what the controlled directivity would do to combat such a room, as well as hear what the built-in room correction could do. 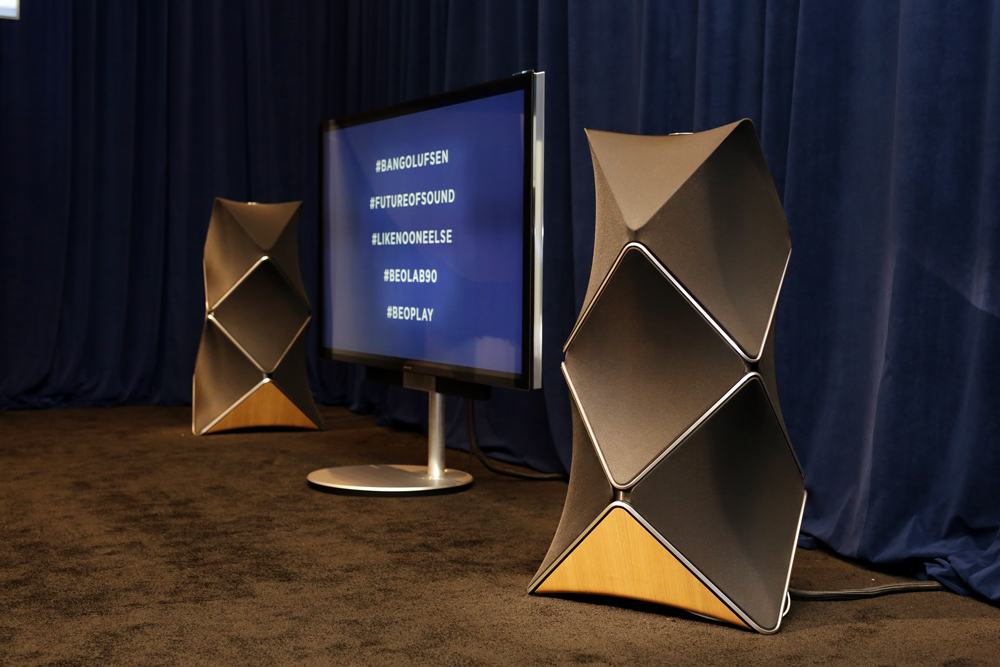 I must say, I wasn’t prepared for what came next -- when the first track came on, the center vocal image was so firmly placed and so holographic in space that I immediately leaned forward to Roger and asked, “Is it just me or are these speakers imaging like (expletive deleted)?” (Fellow writers have told me that the more I like something, the more I swear.) Roger nodded his head, indicating he heard it too -- it was astoundingly precise. I then noticed that the bass was incredibly deep, stupendously full, and very powerful, but also extremely tight and, most importantly, not overloading the room in the least, the latter indicating that the room correction works. The midrange, too, sounded so rich and robust you’d swear there might be a bunch of tube amps inside instead of B&O’s class-D ones, but it was also exceptionally well detailed and ultra-precise in its delivery. It was also apparent that the speakers sounded absolutely effortless, even playing at pretty high volume levels in that very large room full of people -- there wasn’t a hint of strain, which probably has a lot to do with all those drivers sharing the load. The second track sounded just as remarkable, so after everyone had a chance to listen, I went back and listened to the first track again just to make sure the first time around wasn’t some fluke. It wasn’t. This was a real “holy (expletive deleted)” presentation. The only thing I couldn’t get a handle on was the high-frequency presentation -- it sounded a little soft, but I’m unsure whether it was too soft. So the jury is still out in that regard. 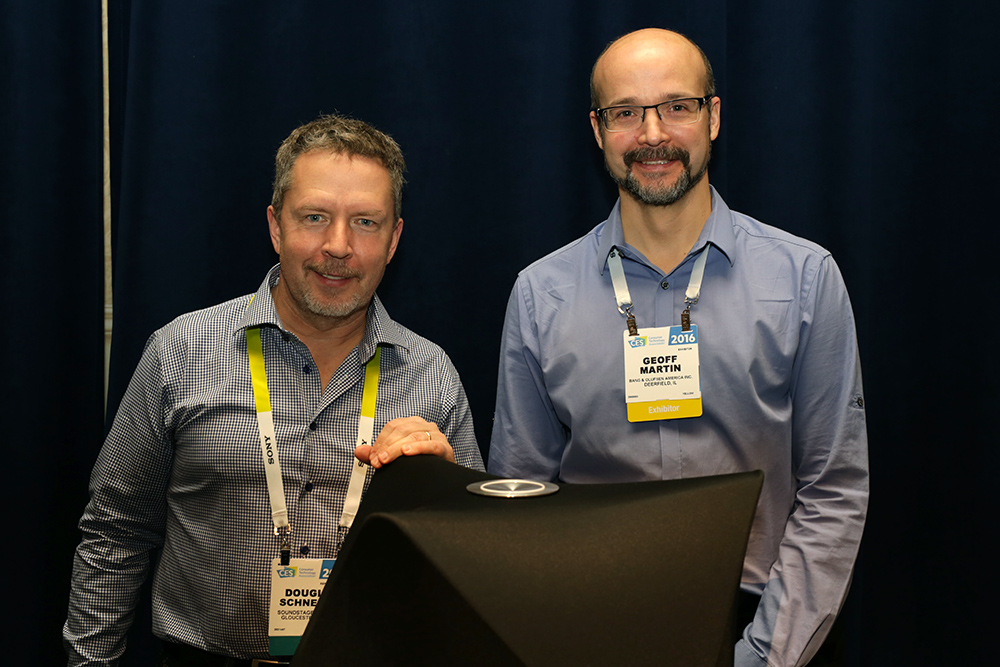 My auditioning of the BeoLab 90s was too short to make any definitive judgements on the success of the design -- without question, I’d have to listen longer and in far more familiar surroundings with material I know to fully understand what it achieves. As I mentioned, we also didn’t get to hear if the sweet spot can be widened the way B&O claims. Still, what I heard from the pair at CES 2016 absolutely blew me away -- the way the pair imaged, coupled with the fullness, richness, and presence exhibited, had me talking about them for the rest of the day. Now I feel a little foolish for at first thinking they were a stupid design. Don’t make the same mistake -- hear a pair of 90s if you can.