Not too long ago, the idea behind an integrated amplifier was simple: it combined the preamplifier and power amplifier into a single case, often incorporating a phono stage as well -- a convenient all-in-one solution. This year at CES I found three companies that have realized that this approach has become rather limited, so they decided to take things a few steps further by adding even more features such as DAC boards that enable a multitude of digital inputs, iPod connectivity, wireless streaming, and even HDMI switching! In fact, there were many companies offering different variations on this theme, offering one or more of these features, although none offered all of them. But there were still three cutting-edge integrated amplifiers that really stood out for me. 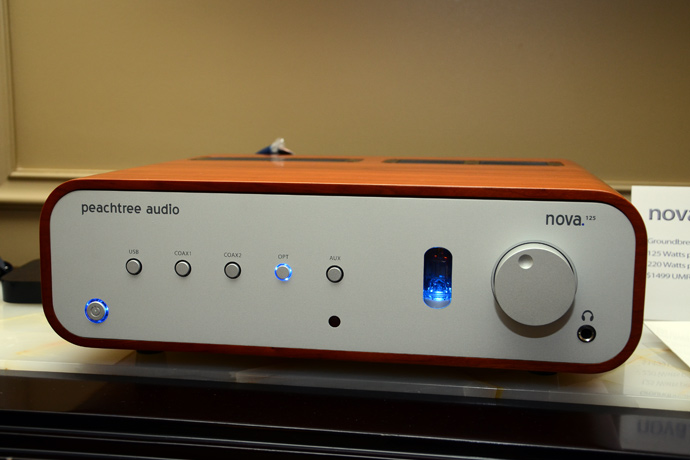 The least expensive integrated that thoroughly impressed me was the Nova125 ($1499) from Peachtree Audio. It's a significant upgrade from the original Nova model, and it's unique in that it has a hybrid preamp section utilizing a single 6922 tube that feeds a class-A output section. It also has 11 regulated power supplies and boasts a higher output of 125Wpc into 8 ohms. There are five digital inputs (two coaxial, two optical, and one USB), two analog inputs, a phono stage, a headphone amp (shared with the tubed preamp), dedicated 24/192 ESS Sabre DACs for all digital inputs (save the USB input, which is routed through its own 24/96 ESS 9006 Sabre DAC), and a home-theater bypass mode. The Nova125 will be available in cherry, rosewood, and gloss-black finishes when it ships in April. There's no question that Peachtree Audio's new Nova125 promises a tremendous value to anyone interested in an integrated. 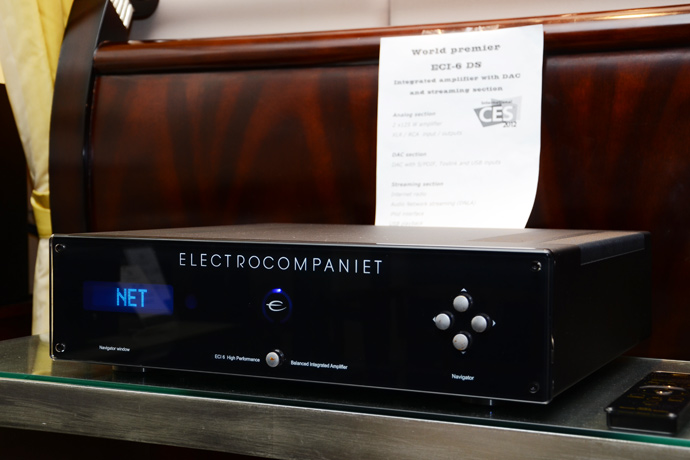 The next one-box wonder was the yet-to-be-released ECI-6 DS by Electrocompaniet. Priced at $6000, the ECI-6 DS offers the most comprehensive list of features I've ever seen in an integrated amplifier. Like the Nova125, the ECI-6 DS puts out 125Wpc into 8 ohms, but has solid-state voltage and current-amplification stages, and uses a 500VA transformer with over 80,000 microfarads of capacitance. Looking at the rear panel, you'll discover a plethora of connections including a pair of balanced inputs, three analog inputs, home-theater bypass, your choice of balanced or single-ended pre-outs, four HDMI inputs, and a single HDMI output.

The HDMI inputs allow you to connect A/V components such as a universal player and send music as either PCM or bitstream to the ECI-6 DS, and even pass the associated metadata to a larger external display. Electrocompaniet was rather hush-hush about the DAC used inside the ECI-6 DS, other than to say it was proprietary and that it could handle incoming signals at resolutions up to 24/192. What they were excited about, however, is that the ECI-6 DS is a full streamer, allowing you to stream from the Internet, your network, an iPod, or USB! Offering a robust preamp/power-amp section and seemingly unlimited connectivity and streaming capabilities, this integrated is among the best at the show. 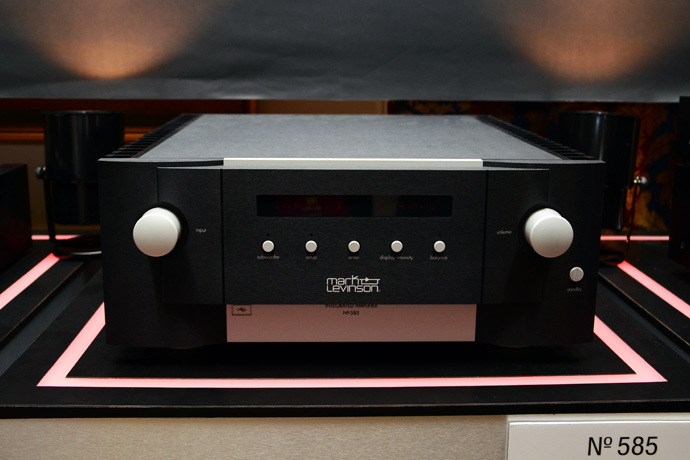 The final integrated that caught my eye was yet another soon-to-be-released multitasker from Mark Levinson. Titled the No585 integrated amplifier, this unit has all of the features of the Electrocompaniet ECI-6 DS with the exception of streaming capabilities. What you get instead is a much more powerful class A/B amplification section offering 225W of power to each channel into 8 ohms. There are five digital connections, much the same as what you get with the Nova125, but the analog connections differ slightly in that there's a balanced input accompanied by two pairs of single-ended RCAs. The 32-bit/192kHz DACs handle all of the incoming digital signals, including those from USB and the four HDMI 1.3 inputs.

In addition to the higher power output, what sets this integrated apart is its onboard bass management, which includes a high-pass filter for the main outputs and a low-pass filter in case you wish to run a 2.1-channel system. There's also a home-theater bypass for easy system integration and a host of additional control ports. Priced at a cool $10,000, Levinson's new integrated still poses a tremendous value due to its excellent feature set and high power output.

In a market offering exceedingly high-priced separates, these three overachieving integrateds pose an undeniable value and demand to be considered. For me, when I consider all the factors, they are the best of the best when it comes to value, performance, and flexibility, and they really stood out at CES 2012.