Here's a unique idea for high-end audio -- value! The proliferation of cost-no-object systems at audio shows no doubt leaves the average consumer feeling somewhat left out. While featuring monstrous conglomerations of absurdly expensive gear helps to draw a crowd, that same crowd needs to see something affordable that might just work well in a real home. Of course, exhibitors do bring affordable gear with them, but it's usually stuffed in a corner, probably not even hooked up.

At this year's Salon Son & Image, that's all changed. The organizers challenged exhibitors to assemble a system for $5000 or less, and they provided signs for the doors so that the public could discern which rooms contained these systems. 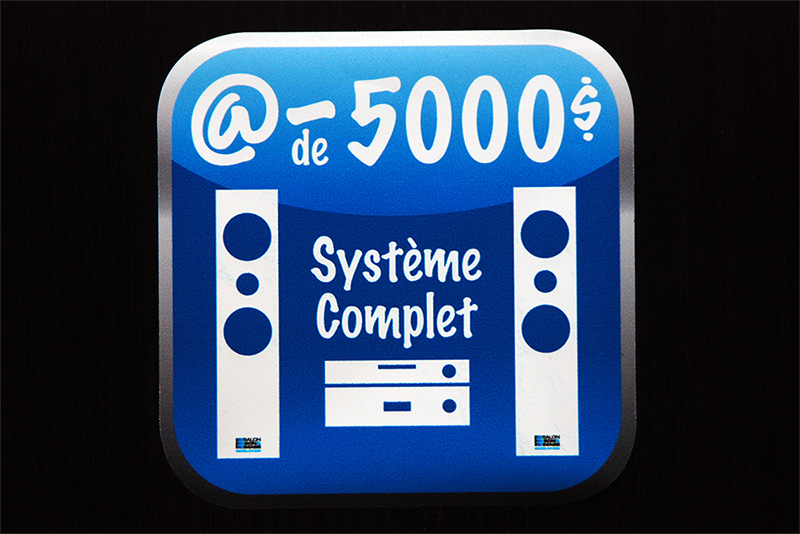 Good plan, I think. While I didn't do a strict accounting, it seemed that about one out of every five rooms was displaying the sub-$5k sticker, but that's still pretty darned good for an industry that generally leans toward wretched excess.

The concept of a high-value system really struck home as I walked into one of the Focal rooms. While the sound quality of this system was just fabulous, the combination of the Focal 1038 Be speaker, Devialet D-Premier amplifier, and Crystal Cable Reference cables was an order of magnitude more expensive than the top limit of the $5k challenge. Not to slight any of these ambitious products, but even the speaker cables exceeded the upper $5k limit. This is not a system for the normal working Joe.

Joe could swing an entire system for $5000 though. As I said earlier, it's still a serious amount of cheese, but it's achievable.

Another neat concept -- with only a couple of exceptions the $5k systems were all playing music. The rooms generally weren't devoted to the smaller systems, but the exhibitors easily switched over to the $5k systems when asked.

Five thousand dollars is a lot of money. In the first few years when flat-panel TVs came on the market, it didn't seem unreasonable to spend this kind of coin on a plasma panel. But with the current influx of high-end displays at sub-$2000 price points, a stereo at two-and-a-half times that price could be a hard sell to the uninitiated buyer who's used to Best Buy-type audio systems that top out at $200. That's where the SSI 2013 $5k systems come into the picture. The different rooms gave visitors the ability to compare systems that retail for roughly the same price, see where the differences lie, and imagine these complete systems in their homes.