Welcome to the 21st century. I left my home in Toronto, heading to Montreal with a five-hour drive ahead of me. That's no big deal, really, as I love long-distance driving; I have a fun, fast car (Subaru STI) and a good stereo system (JL Audio sub, Morel speakers, and US Amps tube-hybrid amplifiers). Part of my pre-drive preparation involved copying over a bunch of high-resolution music files to my Android phone. Once in the car, I hooked the phone up via Bluetooth to my car deck and used the system for a number of tasks. I made phone calls using hands-free access, used the phone's GPS to guide me right to my hotel, and listened to music through the car system.

Ten years ago these activities would have been considered science fiction.

And now I'm here at an audio show and -- imagine this -- CDs are essentially obsolete. Keep up or fall behind. It seems like only about 20 percent of the rooms have CD players. The rest are using some sort of computer-and-DAC setup, so you can't play your own music, which -- you'd think -- is part of the reason you come to an audio show in the first place.

But remember that phone I have in my pocket? There were a number of rooms where I could whip out my "phone" and play the music right off the damn thing. 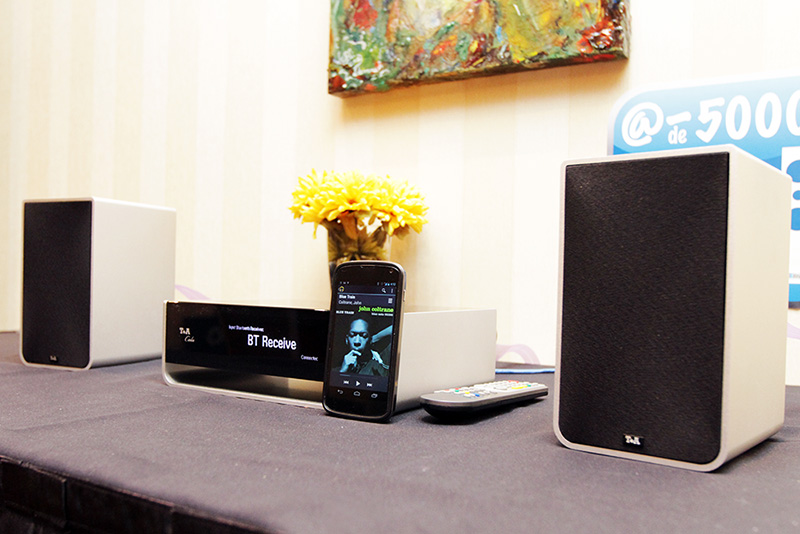 In the Dynaudio / T+A room I set my phone to search for Bluetooth devices, and sure enough it locked on to the T+A Cala multi-source audio system ($2200 USD and $900 for the CS Mini speakers). This all-in-one UPnP network streamer and amplifier then proceeded to belt out a decent-sounding rendition of Coltrane's Blue Train that I'd compressed down to 320kbps MP3.

The Cala's a neat little unit that chugs out an impressive 55Wpc, has preamp outputs for driving a subwoofer, and can receive Internet radio stations or stream music directly from your server. You do have a server don't you?

And get this -- the Cala even includes an FM tuner so that you can receive actual radio signals from out of the ether. How quaint! Coming back into the space age, the Cala hooks up every way imaginable. There's an Ethernet port, USB and Bluetooth inputs, and it's Wi-Fi capable right out of the box. There's also an analog input for your old cassette deck.

How cool is that?