Gradient SW-S -- And Now for Something Completely Different

Confident claims in audiophile literature are commonplace. More rarely seen, however, is confidence that's entirely devoid of embellishment, from someone looking you unerringly in the eye. Tim Ryan of SimpliFi Audio displayed this borderline-unsettling conviction as he explained the theory behind the Gradient SW-S ($6990 USD per pair), a triangular, non-ported dipole bass module with two 12" drivers, maneuvered by the included external crossover.

"It's all down to physics," Tim says. "The listening room is the biggest obstacle in the quest to accurately render a mastered recording, with room reflections wreaking havoc on the end result." Preventative measures, rather than ameliorative ones, are the order of the day here. And so it is that Gradient is offering the SW-S bass module, which can partner any bookshelf speaker a buyer might have, and in tandem with the external crossover, handle the frequency range from 200Hz on down to 20Hz. The dipole design eliminates horizontal reflections at 90 degrees on either side of its front baffle, and even vertically! 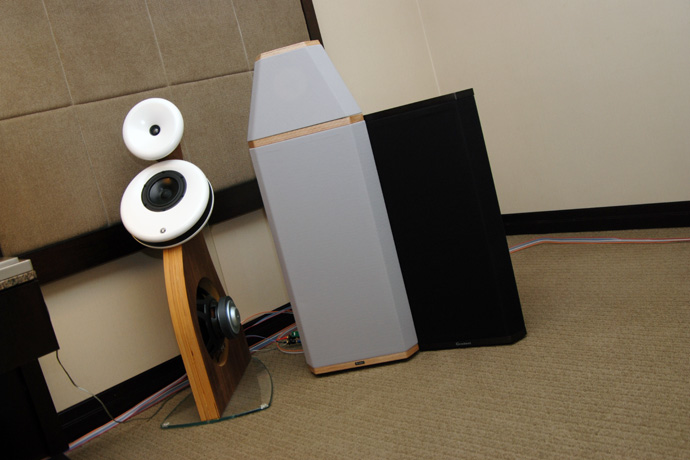 Beware of someone telling you that he or she alone has the answers at the expense of all others. A bit hubristic of the Irishman, idn'it?

Skepticism aside, the Gradient room was one of very few I made a specific effort to revisit on my second full day here in Montreal. The Harberth bookshelfs used as part of the demonstration provided the supporting cast of tweeter and midrange, while the dipole SW-S filled the room with a degree of pomp and circumstance. It wasn't the most tuneful bass I've ever heard, nor was it average. I have no reason to doubt the claim that the SW-S reaches 20Hz at full tilt, and it struck me as pretty agile for a pair of 12" woofers voicing up to 200Hz. I didn't love it, but I think I liked it.