Headphones are hot, and by all accounts, growing hotter by the year. Thanks, Beats by Dre! Expensive headphone amps always used to be the province of crusty, awkward old men -- no longer. 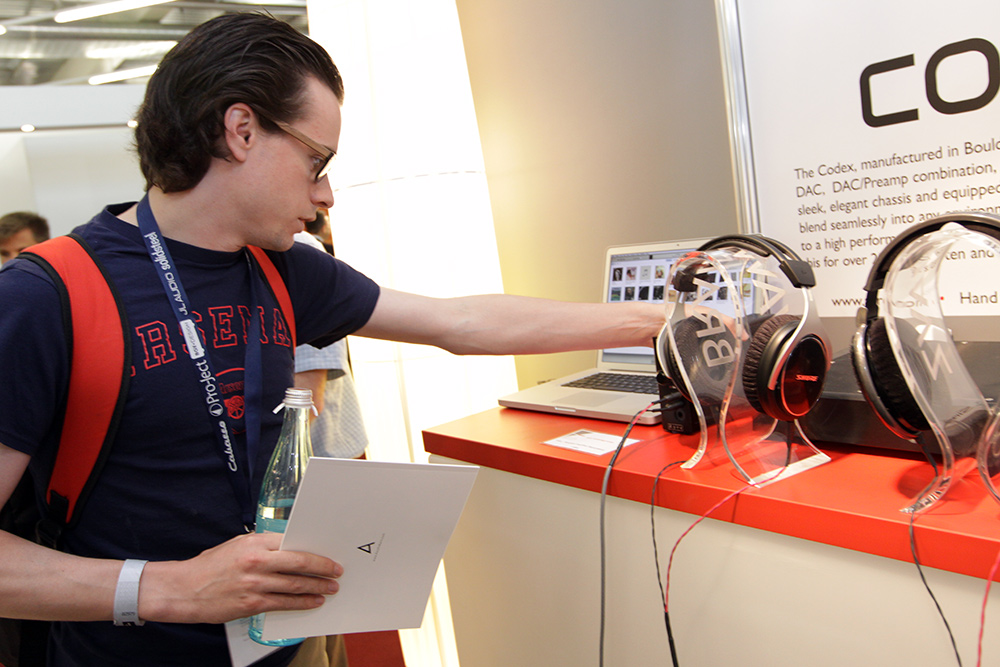 Ayre Acoustics of Colorado, the firm that designed the circuitry in Neil Young's Pono high-definition music player, brought a production version of its Codex headphone amplifier-DAC (it was shown as a prototype at CES 2015). This little Swiss Army knife can also serve as a standalone DAC or a DAC-preamp in a full-fledged stereo system. 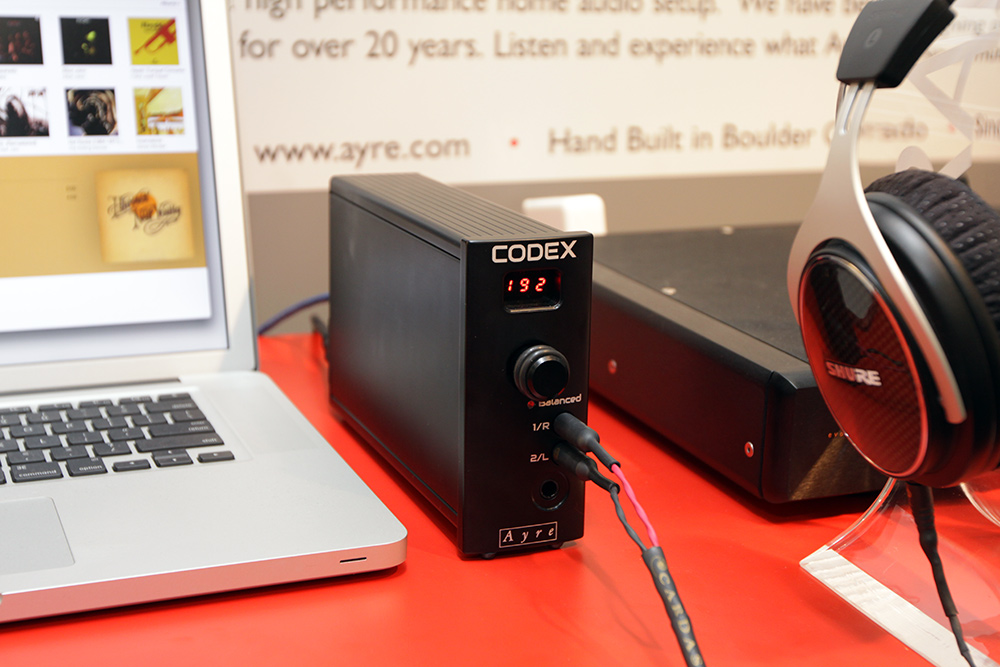 Priced at $1799, the Codex uses the evergreen ESS Technology Sabre Reference 9018 chip, offering asynchronous USB and optical inputs, balanced and single-ended outputs, one 1/4" jack, and two 3.5mm jacks (which can be used in tandem for balanced operation). The Codex is definitely part of the Ayre family, as it's a zero-feedback architecture with an AyreLock power supply and Diamond output stage, and makes use of a custom Ayre digital filter. Finally, the Codex handles PCM up to 32-bit/384kHz, and up to DSD128.

Mobile-friendly Astell&Kern is on a roll in recent years, and the company debuted its $3499 flagship AK380 player here at the Munich Order Center. While it's certainly not the smallest or thinnest high-resolution mobile player available, it may just be the most fully featured. It features a 4" WVGA touchscreen with a sharp 800x480 resolution. It uses dual AKM AK4490 DACs, which do PCM up to 32-bit/384kHz, and can handle up to DSD128. The only input is of the USB Micro-B variety, while the output is a combined 3.5mm headphone jack/TosLink connection (as is commonly found in Apple computers), and a 2.5mm balanced output. Wi-Fi and Bluetooth 4.0 are both built-in. It has 256GB of onboard memory, and buyers can add up to 128GB via the microSD slot. 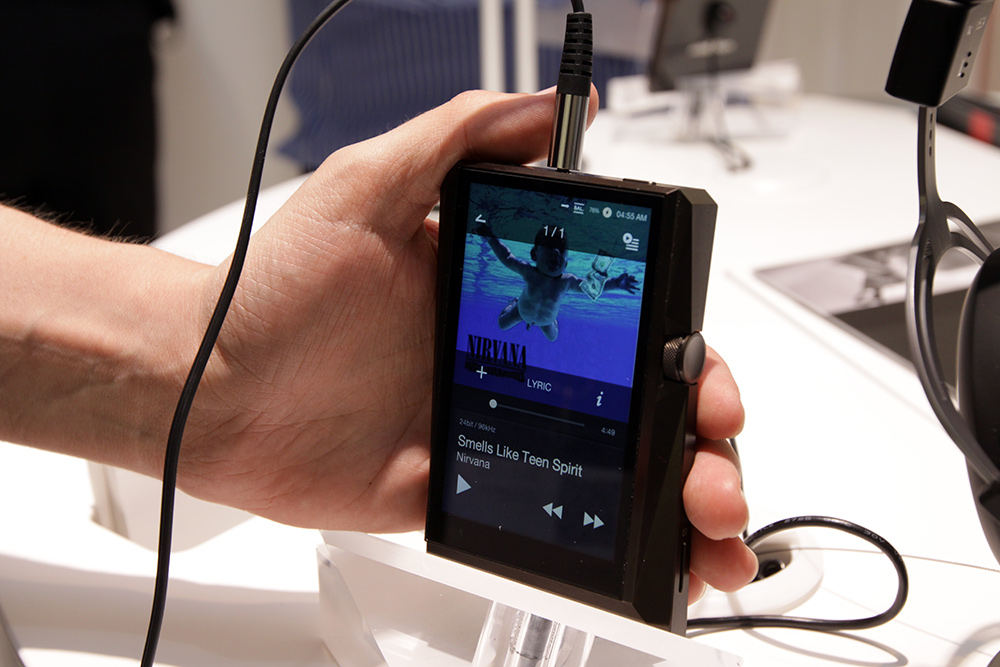 The AK380 -- made from Duralumin -- was pretty bulky to wield, at least in comparison to today's smartphones, with dimensions of 3.14" wide, 4.42" height, and 0.68" depth, and a weight of 7.68 ounces, but its interface was snappy and responsive. Future matching accessories include the AK380 amp (increased power output for inefficient headphones), the AK380 cradle (docking cradle for charging and for use as a dedicated DAC, which includes balanced outputs), and the AK380 CD-ROM (external drive that permits ripping CDs directly to the AK380). For the active audiophile who has everything, including plenty of money, Astell&Kern has you covered.

And then there was Audio-Technica. The company wowed with the introduction of its €6000 AT-HA5050H, a "hybrid reference headphone amplifier." The '5050 is a seriously interesting piece of gear. Before I address the specs, take a look at the picture below -- the amp is even prettier in person. It has two small Sifam VU meters on the front panel that illuminate with a soft-yellow glow. The volume knob has real weight to it, while the VU range and input knobs are similarly well integrated. This looks and feels like a real luxury product -- as it should for €6000. 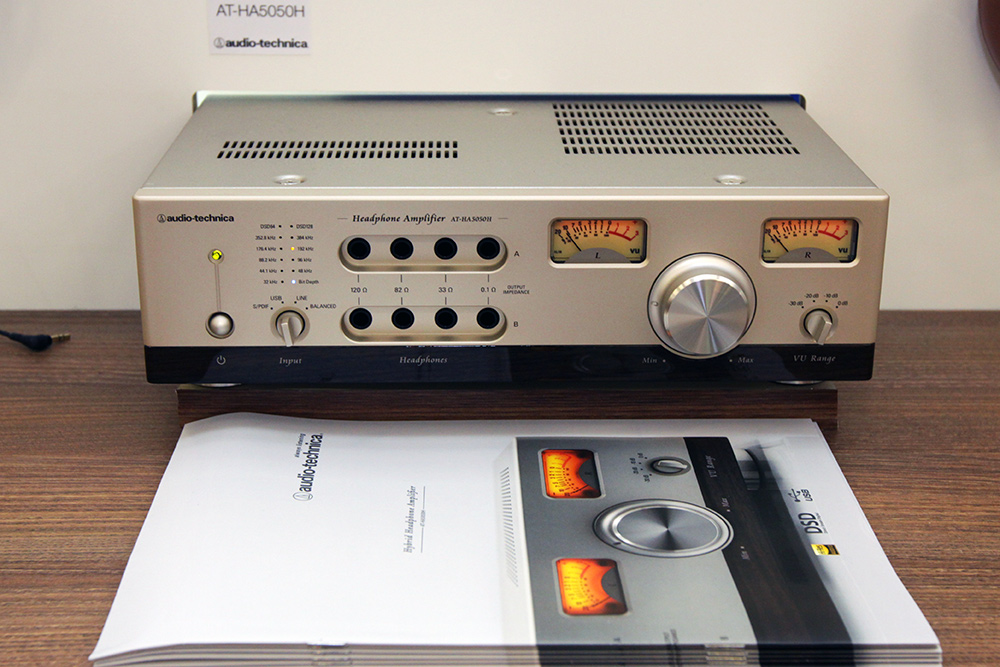 The hybrid amp makes use of a pair of E88CC vacuum tubes in the preamp stage (which Audio-Technica burns in for around 100 hours to select the ones with the lowest noise levels), while class-A Toshiba bipolar transistors provide 62mW of motivation into a 32-ohm load for your headphone of choice. Nichicon electrolytic capacitors and WIMA polyester capacitors make an appearance, as do Lundahl input transformers. In the rear are balanced and unbalanced analog inputs, USB and S/PDIF digital inputs, an input attenuator switch (0dB or -12dB), and a USB selector switch (asynchronous or adaptive). The internal DAC supports up to 32-bit/384kHz PCM, and up to DSD128 via the USB input. No fewer than eight 1/4" headphone jacks are arrayed on the front panel, allowing for two listeners to individually tailor the output impedance of the '5050 to their respective 'phones or cans: 120 ohms, 82 ohms, 33 ohms, and 0.1 ohm.

With the hustle and bustle associated with covering an expansive show like Munich, I didn't have the opportunity to listen to the hybrid Audio-Technica amp, but I certainly wanted to. Judging by the build quality, as well as the thoroughness, detail, and accuracy of the matching literature, I would guess that it sounds quite special.

Long live the headphone renaissance. These are some promising-looking toys, right here.