A Tale of Two French Speakers -- Focal and LEEDH

High-end audio is built around extremes. The attention-grabbing companies generally build products that are large or expensive, or -- more commonly -- both. Great big amps. Refrigerator-sized speakers. Forearm-thick cables. Turntables that take three people to lift. It's all about wretched excess, conspicuous consumption, and one-upmanship.

In my book there's nothing wrong with this situation. Competition builds the breed, so to speak. That's why you end up with systems such as the Naim and Focal monstrosity. This system starts out with the Focal Stella Utopia EM speakers, which are made at the company's factory in France, complete with electromagnet-powered woofers (don't get your pacemaker anywhere near them), weighing in at a nut-dropping 363 pounds each, decked out in arrest-me red-gloss lacquer, and retailing for a horrifying $105,000. These speakers are not for human beings. They're for rich, Walmart-owning aliens. 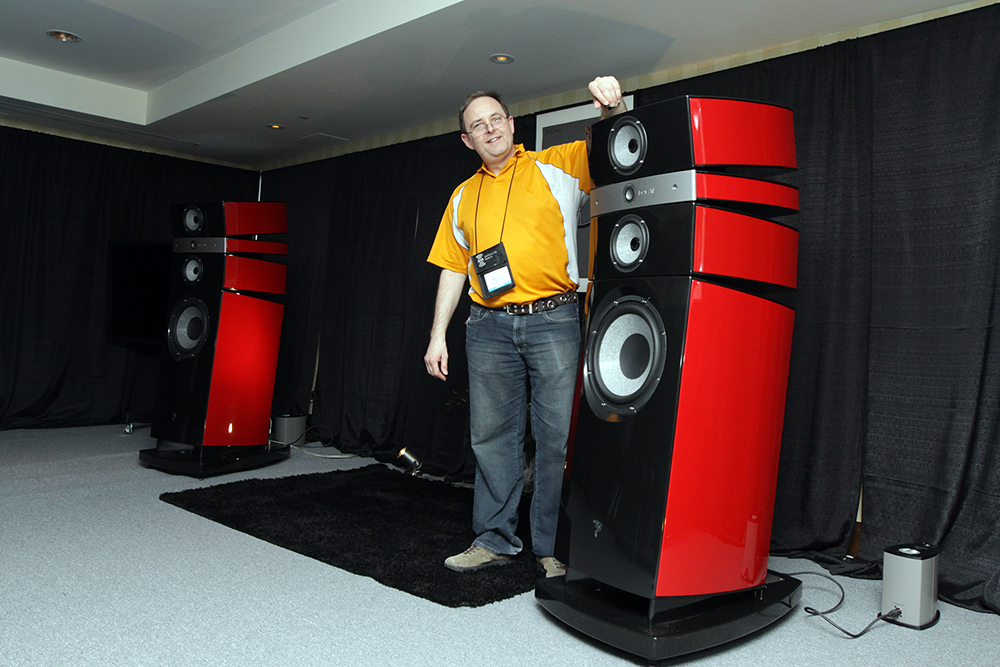 While the Focals glowed hot like a red giant sun, off to the right was the Naim Statement system, lurking like a dark, gravid neutron star. OK, maybe I'm going over the top with these similes, but these products demand hyperbole. I'm really just doing my job here. The Naim Statement S1 mono amps and S1 preamp are purpose-built to be an ultimate, no-holds-barred system. The $240,000 Statement is the warp core of the stereo world. It's intense -- ridiculously so.

Anyway, my point is that I was sitting there, with a beer in my hand and one already down in my belly (this was after show hours), listening to an incendiary Jeff Beck track, with my hair blown back Maxell-style by this one-horsepower-per-channel system. There was an effortless sense of power to the Focals as driven by the Naim system. At the paint-stripping volumes we were enduring, I found the upper end a touch hot, but I had no problem enjoying this over-the-top display of luxurious excess. Honestly, I sat there giggling, smiling, unable to believe how much fun I was having. 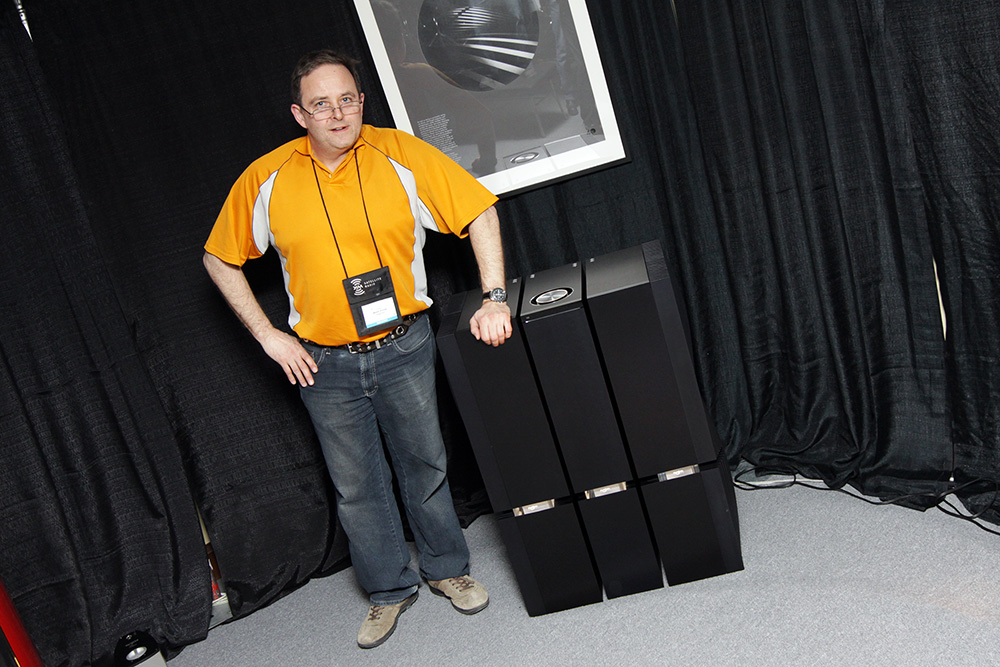 But, but, but . . . it's a huge system, and huge shouldn't really be necessary for musical satisfaction. And it's not really feasible for normal human beings who live in normal, humane spaces. You'd need a really large room to house this system, and to say that it'd dominate that room would be an understatement of the highest order.

Turns out that you can get this kind of musical satisfaction from a smaller system. Way smaller, I might add.

The room next to mine in the Hilton Bonaventure was making one heck of a racket. Through the walls and the adjoining door I could hear intense cymbal crashes and pressure waves of deep, tight bass. So the first morning of the show I went next door to see what kind of system was making such a ruckus.

The room, hosted by Conceptas Sound & Engineering, contained -- as far as speakers go -- a whole lot of very little. The LEEDH E2 speaker, which also comes from France, is the oddest thing. It comprises three tubes, with drivers at each end of the tube, so that's six drivers plus one fairly conventional tweeter. The six drivers in the tube are anything but conventional -- they employ some serious technology that allows the 2.1" drivers to produce bass down to a claimed 20Hz. Although I didn't hear any true 20Hz notes coming out of the LEEDH speakers, I heard bass drum whacks and acoustic bass that contained true, effortless 30-40Hz information. This is astonishing low-frequency performance that truly needs to be experienced. 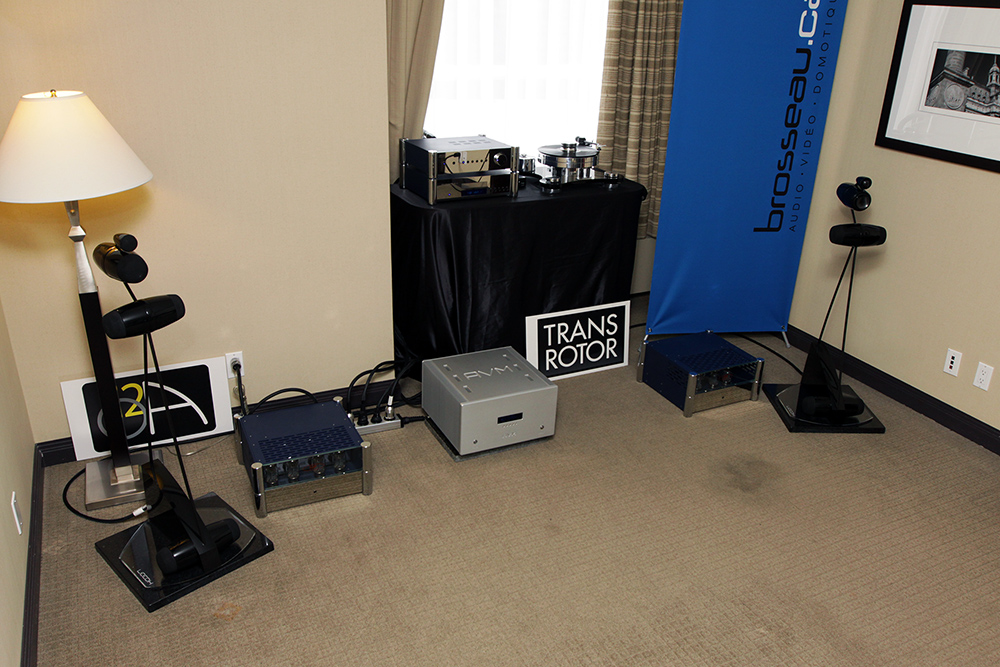 The LEEDH speakers aren't one-trick ponies. Playing a Saint-Saëns symphony, the sense of effortless depth and imaging was amazing. The tonal balance was crisp and light when it needed to be, but without the slightest feeling of strain. The images were solid, corporeal, floating right there in front of me, with superb front-to-back layering.

I got the feeling that the best-in-class imaging is partly the result of the side- and rear-firing midranges. There's some significant room interaction going on with these speakers, and I would imagine that placement is crucial.

When I first heard these speakers, I knew they just had to be expensive. I was right. The LEEDH system was probably the most expensive system at the show when calculated by the pound. At $28,000 for the pair, that's a lot of coin for those small little cylinders. But the sound speaks for itself. While there were a number of really good-sounding systems at the show -- Muraudio, Focal/Naim come immediately to mind -- my favorite certainly was the Conceptas room. Far be it for me to give all of the credit to the LEEDH speakers -- Conceptas had the speakers lashed up to 02A cables, via an AVM SA8.2 amplifier ($15,650), LUA Reference No.7 preamp ($11,338), and LUA CD player ($5180).

It still amazes me that I was able to find two systems, both intensely satisfying and without any limitations, that were so utterly different in how they produced music. The large, overt, monstrous Focal/Naim system is for oil barons and toy junkies who want big, extravagant, fun equipment. I can certainly see the appeal, and if ever I pick the right numbers on a lottery, I'll certainly purpose-build a room for such an enterprise-class system. But my condo overlooking the French Riviera would undoubtedly feature a set of LEEDH speakers against the ocean view. I want both, but it's more likely I'll end up with neither. Woe is me.