These days there's a jillion different ways to skin the media-server cat, and most of them seem like mostly stop-gap efforts, requiring significant know-how or large chunks of Rube Goldberg-like system jiggering.

The solutions to computer audio seem to come in three flavors. First and simplest is a USB output from your computer into a compatible DAC. While this works well, it's hardly a whole-house solution, and it's adequate only for the dedicated, solitary listening that most audiophiles seem so keen on perpetuating.

The next option is to install Apple AirPlay and stick with that proprietary solution. It's certainly an efficient, user-friendly way to build a whole-house system, but to some it feels like surrendering to the man.

Should you decide that you don't want to embrace the Apple way of life, you're stuck with some variant of a DLNA server and left to assemble a hodge-podge of products that can communicate with that prickly hedgehog of a solution. But to make it work, you've got to assemble a server or computer and leave the damn thing switched on all the time (and that means you need to clean the fan, pay the electricity bill, and worry about server-type maintenance). If you're computer-savvy, it's manageable.

But I'm always on the lookout for something elegant -- an all-in-one box for the person who maybe isn't up to taking on the job of server admin, but would also rather not sell his soul to a large corporation. 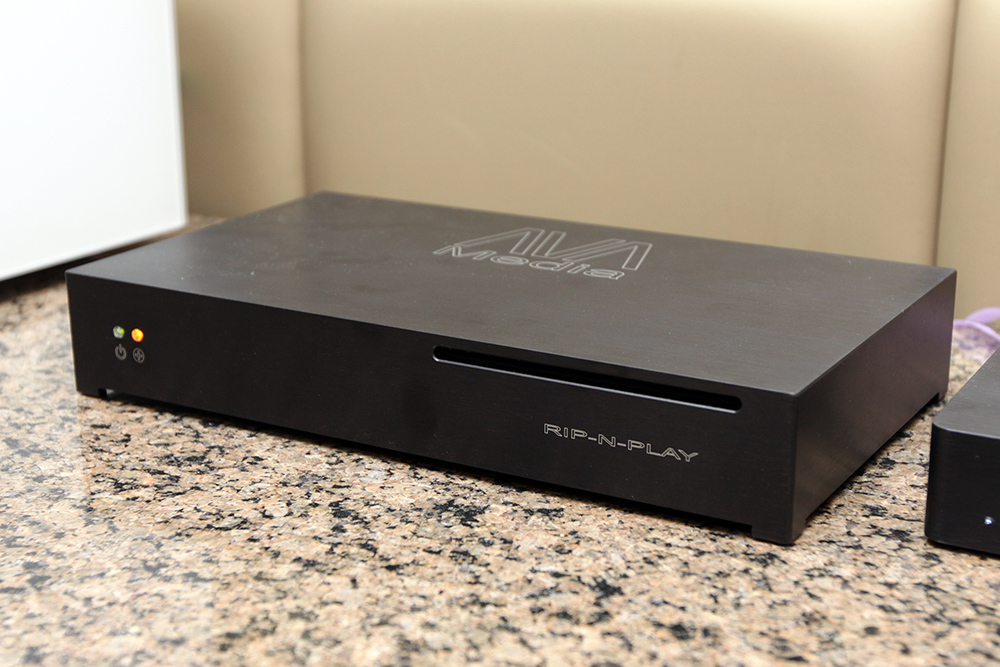 I think I found what I've been looking for in the Goerner Communication room. The AVA Media Rip-N-Play looks to be an extremely elegant solution for a reasonable price. The documentation is a bit thin on internal specifics, but here's what I could glean: the RNP is built into an extremely dense, brick-like aluminum enclosure that's broken only by the connections around back and a CD disc slot up front. Contained within is some sort of low-powered processor (perhaps an Atom fanless job or some kind of ARM/Marvell unit) and a 1 or 2TB hard drive. Slide a CD into the slot and the RNP will rip your disc, convert the data into any format you choose, tag the music, and grab album art for you. All with no intervention required.

Then the RNP will happily communicate with your Sonos or Squeezebox (oh how did you die such an ignoble death?) or even spit out an S/PDIF signal to your DAC. And just in case you want to sell a little portion of your soul to that large corporation, the RNP will also play nice with IOS devices.

Now, most of this functionality is built into the Vortexbox system, which is a Linux-based software package that's free to install on any old Intel or AMD-based PC. I'd wager that the Rip-N-Play uses a kernel that's not far removed from the open-source Vortexbox. And there's nothing wrong with that. Vortexbox is a powerful media server that's well supported by a community of programmers and tweakers, and it's nuts-on stable.

But it seems that AVA has taken the Vortexbox software and built on a solid additional feature set, as the RNP can also provide access to your music library via the Internet, which means you can stream your music from anywhere in the world.

The Rip-N-Play retails for a most reasonable $1695 with the 2TB drive, and $100 less with a 1TB drive. And at that price it's nice to see that the Rip-N-Play is designed and manufactured in the UK. The only question I don't have answered at this point is whether it's possible to increase the storage with an external NAS or USB hard drive. If it's possible to easily expand the Rip-N-Play's storage, this product could be a game changer.