Adjectives like revolutionary, miraculous, and unparalleled are often bandied around in the audio world, but it's rare that the application of these labels is deserved. It's even rarer, in my experience, for a new company to spring up, fully formed, with a statement-level product to which such those terms clearly and obviously apply.

Although Muraudio, based out of Ottawa, Ontario, Canada, was displaying its extremely impressive electrostatic speaker, the Domain Omni DA1, at the TAVES show in Toronto last fall, circumstances prevented me from making it to that room. So the FSI show was my first chance to take a listen to the speakers. At FSI, Muraudio was premiering the Domain Omni PX1, which is a passive version of the active DA1. 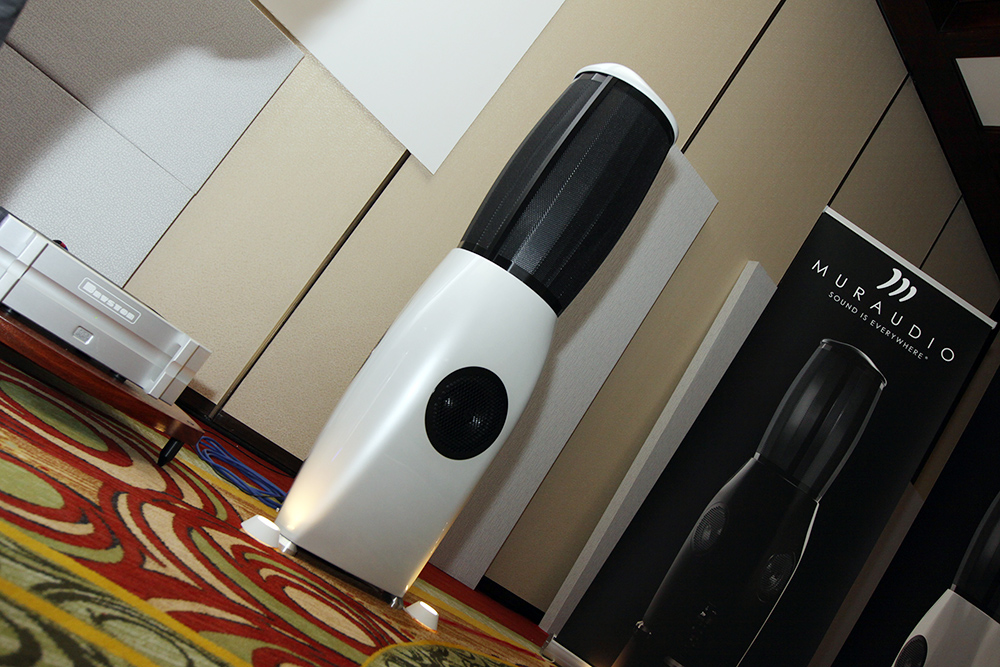 More than any other aspect, the electrostatic panels set Muraudio apart. The panels face outwards, and the speaker radiates the same information around its entire circumference. There are three 9" woofers, 120 degrees apart, so the low and lower-mid frequency signal also radiates in an omnidirectional manner. The electrostatic panels are also curved on their vertical axis, so there's far less vertical cutoff above and below the listening axis than you'll find in traditional panels.

There's far more to tell about this speaker than I have room for in this short report, but Doug Schneider is working on a full review, so stay tuned for more detail.

Back in Muraudio's FSI room, I first noticed that there was an espresso machine off in the corner that was running pretty much full time. After my third shot (you need energy to cover a show) I turned my attention to the speakers. The espresso machine was way off in one corner of the long, high room. The Domain Omni PX1 is a fairly large speaker, but the room was very large, and the speakers actually looked rather small as a result. Despite the room's size, the Muraudios didn't seem to have trouble filling it. There was a slight bit of overhang in the midbass, but I put this down to the extreme room size and the levels they had to play at in order to accommodate it.

But from back over by the espresso machine, what startled me most was the coherency of the sound. When you listen to stereo speakers from way over to one side, the soundfield utterly collapses. You lose all sense of an image, and the tonal balance shifts radically away from the treble. Listening to the Muraudios in this configuration was dramatically different. It clearly sounded like I was off to one side of a live band. I could still tell that I was off axis -- much closer to one speaker than the other -- but the sound was very, very listenable.

I slowly circled the room. Muraudio had placed couches in an elongated semicircle around the speakers, no doubt to encourage visitors to sit outside the traditional sweet spot. I noted an utter lack of tonal shift as I walked behind the couches, and for the most part, the imaging stayed consistent regardless of where I stood. 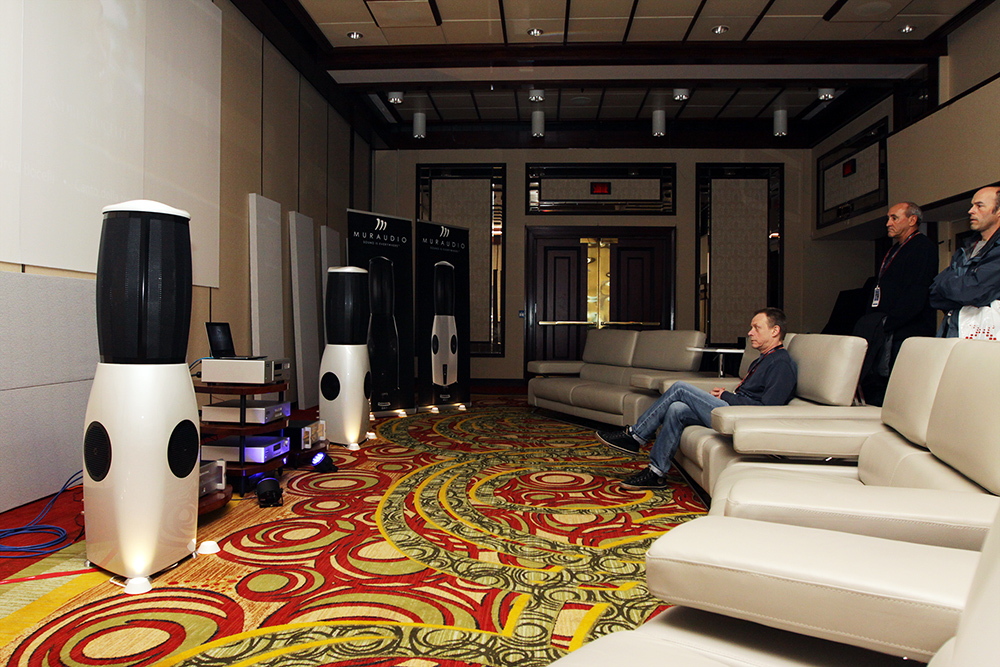 You'd expect pinpoint imaging to suffer somewhat from an omnidirectional configuration, and sure enough, there was none of that minimonitor precision. But in return for that omission, the Muraudios presented life-sized impressions of real instruments. The sound was utterly relaxed, with that obvious electrostatic quickness and warmth.

When I'm traversing an audio show, I mentally split the rooms into three categories. First are those rooms where the sound just basically, for one reason or another, isn't very good. My next category includes those exhibits where I'm not really fond of the sound, but I can see how others might like it -- good sound, but not my cup of tea. The third category is for those rooms that sound good, and it happens to be exactly what I like. The Muraudio room sits here.

While writing this, I realized that I'd heard the Muraudio speakers only with show-standard music -- sparse jazz and overproduced audiophile favorites. I hustled back down to their room and asked that they put on some abrasive rock. They looked through their server and couldn't find any, but they managed to rustle up a USB stick with the entire Led Zeppelin catalog in MP3 format. They slammed on "Custard Pie" for me, and I sat back for a listen. It was clear that this was lo-fi music conveyed in a compressed format, but the speakers didn't fall apart. Rather, the Muraudios kept me engaged and let me enjoy this crunchy Led Zep blooze. It's hard to ask for more from a speaker.

When Doug Schneider gets his review pair of Muraudio speakers, I'm heading over for a listen. I really like these speakers.