Anyone who says we're in the middle of a headphone explosion must think it's 2012. What we're in right now is a headphone amp explosion. Everyone from esteemed high-end brands to largely unknown companies is jumping into the market, trying to persuade serious enthusiasts to upgrade and casual listeners to step beyond the sound quality of their smartphones and laptops.

Here's a collection of the most interesting headphone amps I saw at CES. Please pardon me if I missed a few -- in my quest to find cool headphones, I had to bypass a lot of audio electronics manufacturers in the exhibits at the Venetian Hotel. 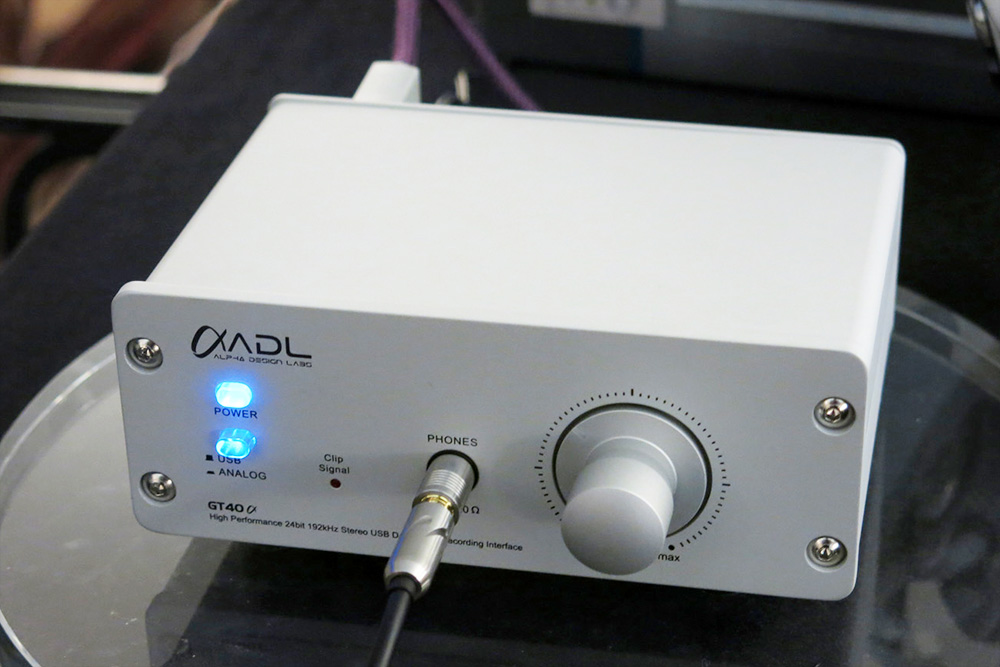 ADL's $529 GT40 Alpha headphone amp-DAC has one feature I wish more headphone amps had: a built-in MM/MC phono preamp. It also has a 24/192 analog-to-digital converter that lets you make high-quality, high-resolution recordings from your vinyl records. The DAC itself is a 24/192 PCM design. A step-up version, the $779 Stratos, adds DSD capability and ups the maximum DAC resolution to 32/384. For a headphone enthusiast (like me) who rarely listens to anything other than vinyl records and music stored on a laptop, the GT40 Alpha or the Stratos -- plus a good set of cans -- is pretty much all you'd need. 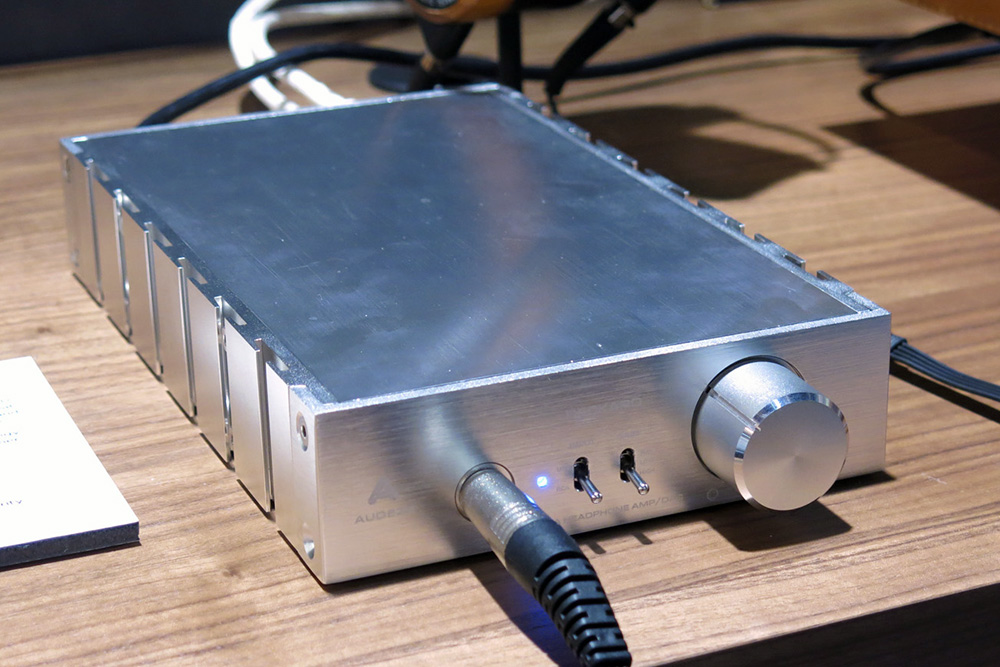 Audeze's Deckard headphone amp-DAC comes in at $699, but thanks to industrial design work from BMW Group DesignworksUSA, it looks like it costs a lot more. The fully class-A amplifier features a DAC with a maximum resolution of 32/384, and also has analog inputs and outputs so it can function as a preamp. A front-panel gain switch lets you select from three gain settings. 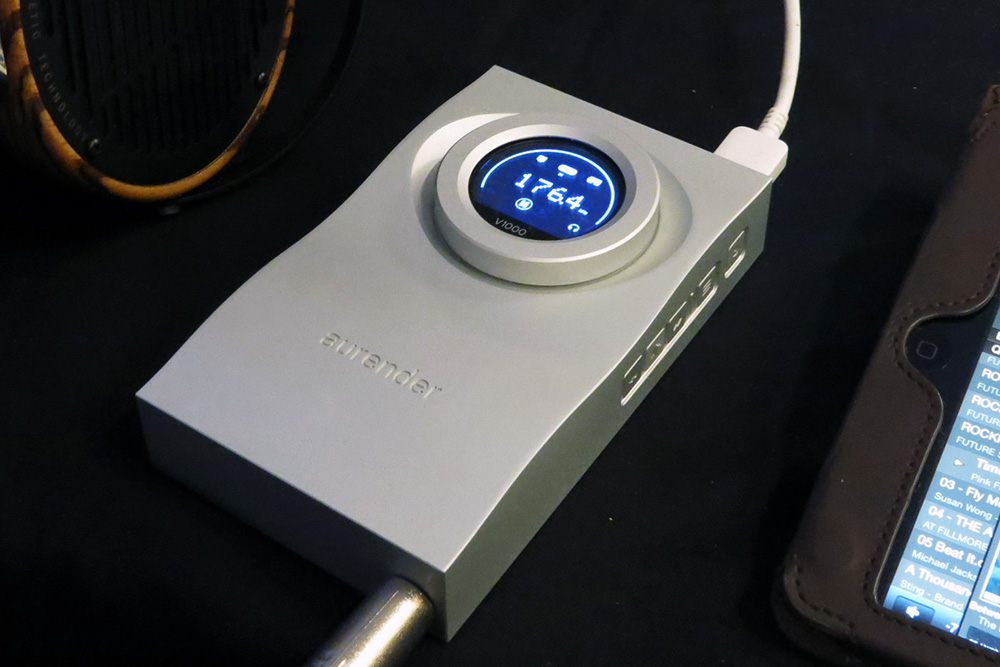 For the growing number of people who use laptops with small solid-state hard drives, the $1295 Aurender Flow could be the ideal headphone amp-DAC. The DAC and amp sections are pretty high-spec, with the DAC taking standard and double-rate DSD audio plus PCM up to 32/384 resolution, and the amp offering a very low output impedance of 0.06 ohms to ensure it'll have no audible impact on your headphones' sound. But the Flow also has a space for an internal mSATA drive up to 1TB in size, so you can store all your music on it without using up your laptop's precious storage space. It's basically like having a good-sized USB drive, without having to carry a separate USB drive. It also offers TosLink input and comes with a leather carrying case. 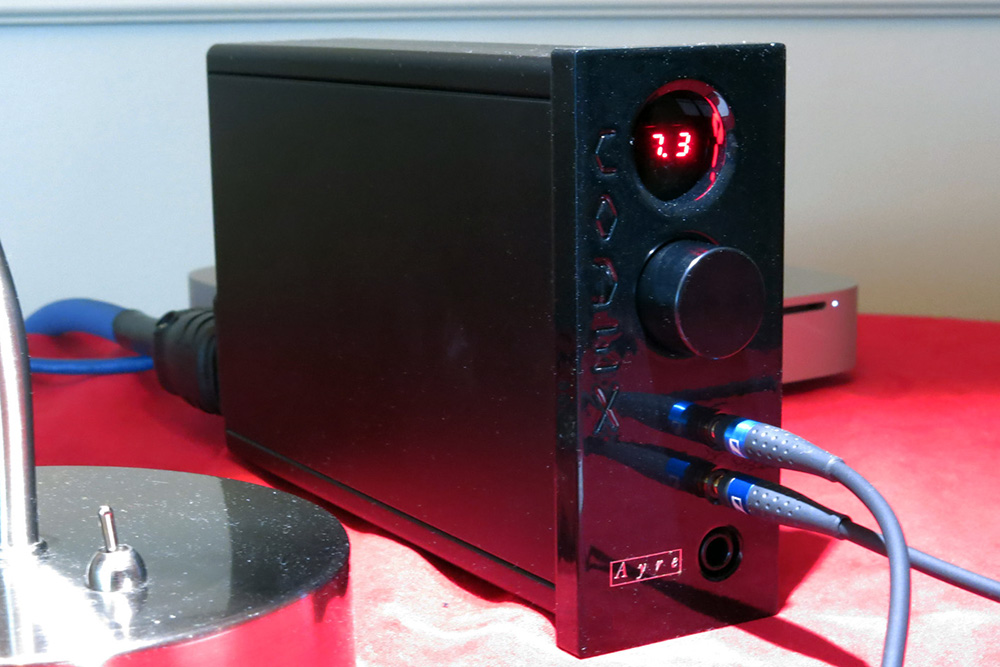 Ayre's known for $5000-plus audio electronics, so seeing its new Codex DAC-headphone amp, which is projected to sell for about $1500, was a shock. "When we did Pono [the Neil Young-backed portable high-res music player, for which Ayre designed the electronics], we learned a lot about making lower-cost products," a company rep told me. The Codex is a DAC first, with DSD at standard and double-rate and PCM up to 32/384 resolution. It has XLR and RCA analog outputs plus USB and TosLink inputs, so it can be used as a digital preamp for a basic system. And of course, it can drive headphones through its 1/4" and 3.5mm front output jacks. 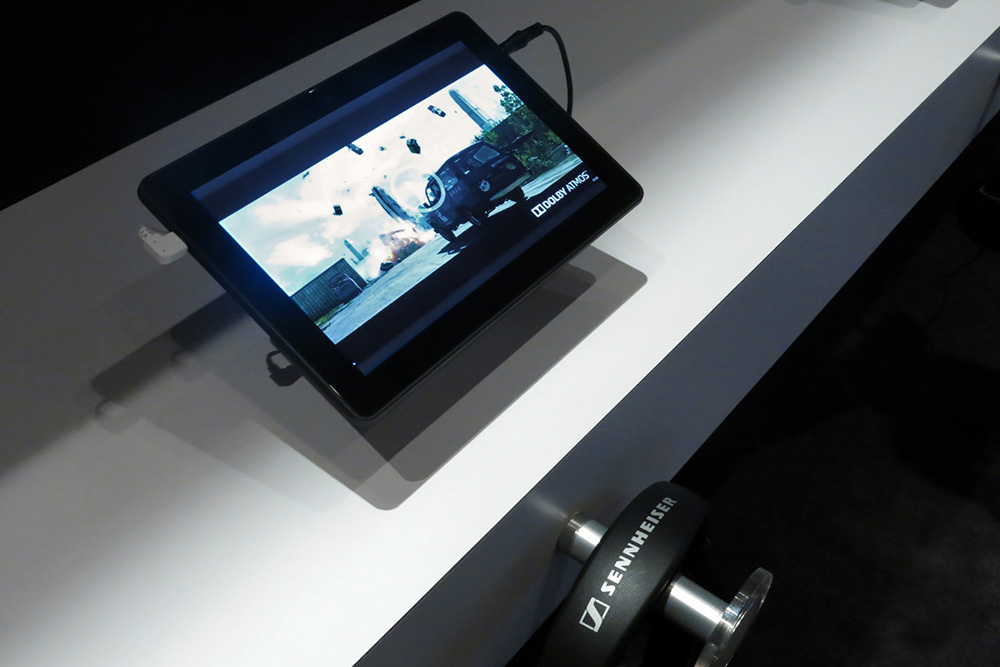 Dolby's Atmos Mobile technology isn't an amplifier per se, but I was impressed enough with it that I decided to include it here. It uses headphone virtualizer technology to create the image of a full Dolby Atmos surround system, complete with overhead speakers. I was shocked to hear how realistic the simulation of overhead speakers was. Based at least on this demo, I think this could be a big step forward in the headphone experience. Right now Atmos Mobile is available only on the Kindle Fire 8.9 HDX tablet shown here. For now, it won't be available as an app, only as a feature included in mobile devices. It's designed to work with material produced in Dolby Atmos, but like the Atmos A/V receivers, it can process non-Atmos material to create height-channel information. 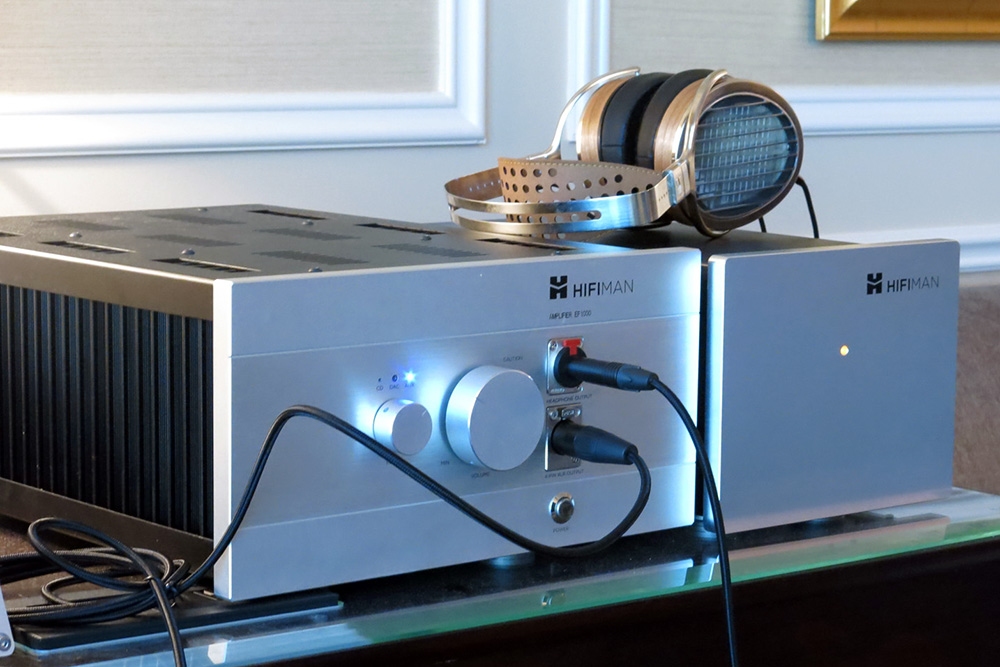 HiFiMan's new EF1000 is an ultra-high-end amplifier designed to drive the company's new HE-1000 ultra-high-end headphone. It's really a speaker amplifier multipurposed to drive headphones. It has a six-tube preamp stage and a class-A transistor output stage that puts out 50Wpc. A separate power supply (shown at right) provides ample, clean DC. The volume control on the front is actually a stepped attenuator that drives more than 30 relays, each relay connected to pairs of resistors for different values. Thus, when you turn the knob, you switch in a different relay and a different set of resistors. This design retains all the sonic purity of a stepped-attenuator volume control, while also allowing HiFiMan to make the volume controllable by remote. No price has been set yet. 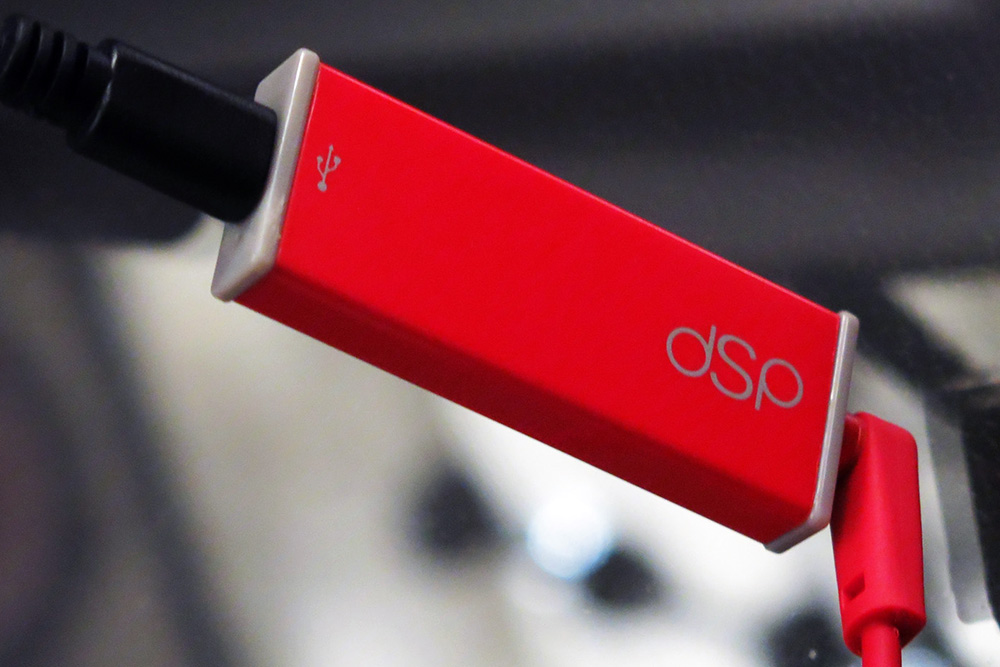 HRT, or High Resolution Technologies, has built its name on great, compact USB DACs. Now it's responding to the growing popularity of ultra-mini USB DAC / headphone amps (such as the AudioQuest Dragonfly) with the Nano series. The series comprises two very affordable products: the $69 DSP (for Windows PCs and Android devices) and i-DSP (for iOS devices with Lightning connectors). Both models can handle numerous formats, including MP3, AAC, FLAC, and Apple and Windows lossless. I have to think that even "just plug into the phone" guys like me, who don't find hauling an amp on the plane or bus to be worth the trouble, might find the price and design of the Nano series irresistible. 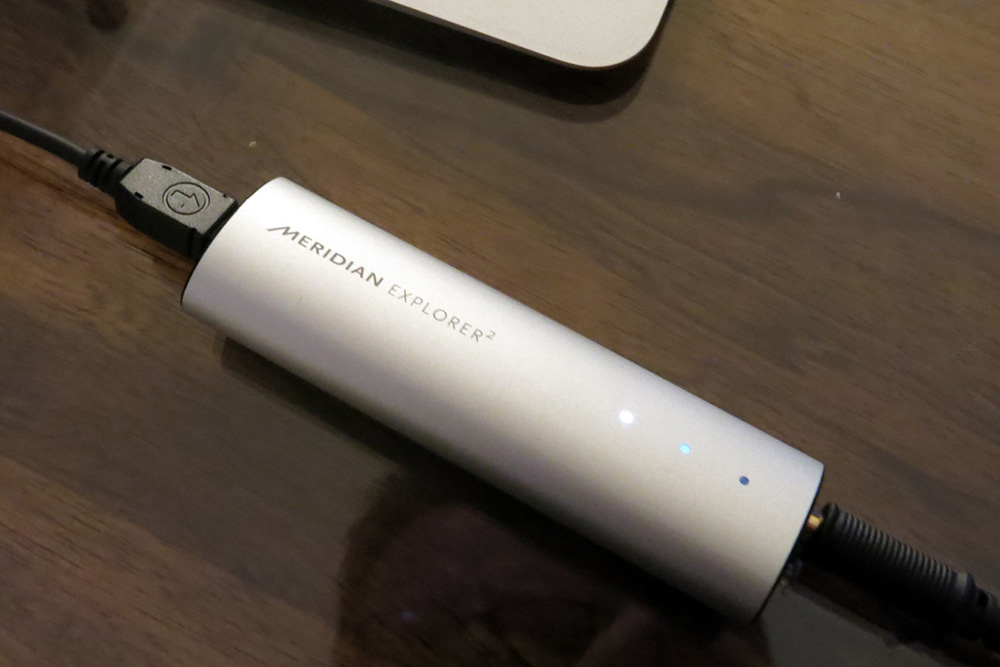 Meridian's $299 Explorer2 headphone amp-DAC is an update of the company's original Explorer. The main difference is that the new model can decode Meridian's new MQA lossless high-resolution audio format, which is designed to deliver high-resolution audio files at data rates low enough to be streamed over the Internet or stored on space-limited mobile devices. The DAC accepts PCM signals up to 24/192 resolution, and also upsamples all incoming signals to that resolution using Meridian's proprietary technology. 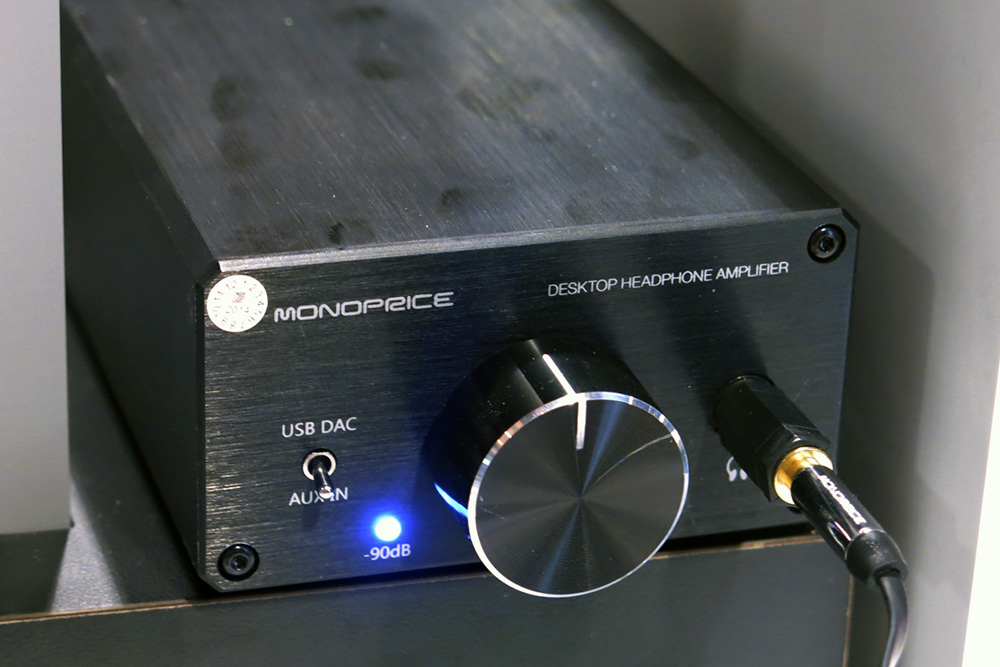 Monoprice's 11567 desktop headphone amp-DAC launched quietly a few months ago, so it wasn't an official launch at CES; I just noticed it hidden in a display powering a bunch of the company's new headphones. I included it here because its low price and nice features make it worth a look. The $98 amp has a USB input to feed its internal DAC, and RCA inputs for analog sources. It also has a preamp output (linked to the volume control) and a fixed-volume line output, so you can connect it to a preamp or receiver, or directly to a power amp. 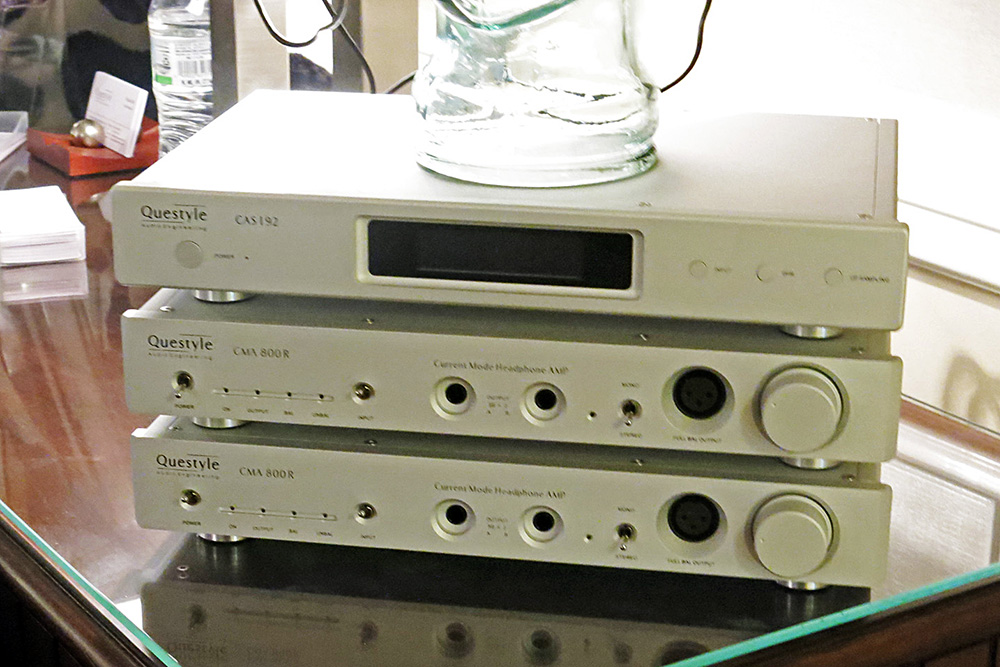 Many headphone enthusiasts embrace the balanced headphone concept, in which each channel gets its own ground connection instead of sharing a single ground connection. Questyle designed its $2000 CMA 800R headphone amp specifically for those who want to get the maximum possible performance from a balanced setup. Each channel has its own separate amplifier. (For a balanced system, you need two CMA 800Rs, but you can also run a single CMA 800R in a standard configuration.) The volume controls are not linked, though, so you have to adjust each channel's level separately. 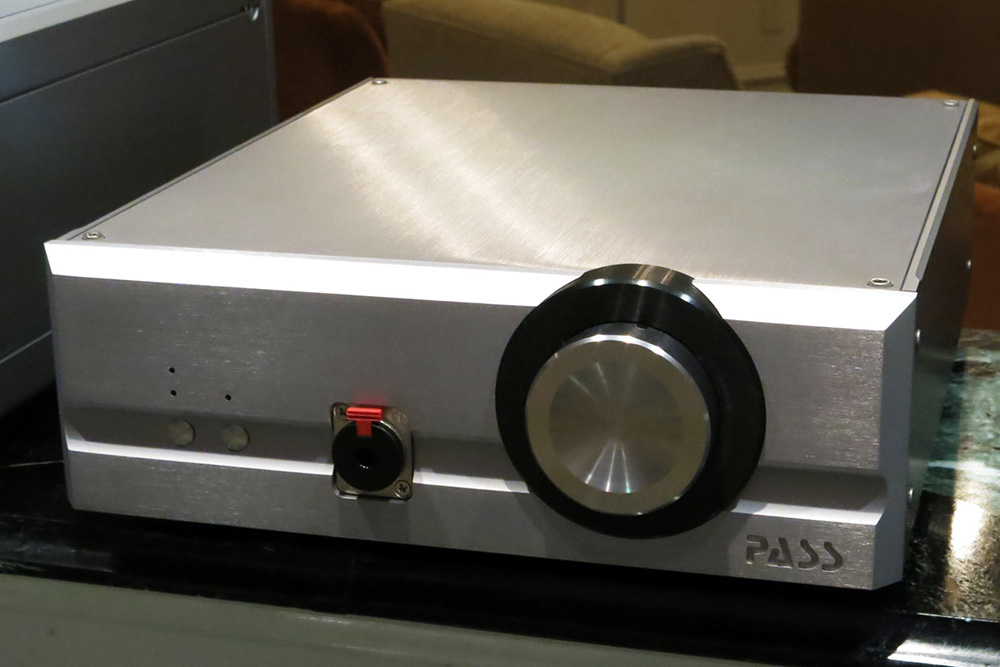 The Pass Labs headphone amp doesn't have an official name yet, but it comes from Pass Labs, one of the most revered amplifier brands in audio history, so that's something. It's a class-A solid-state design with low feedback, fully discrete audio circuitry, fully discrete voltage regulation, and a custom shielded transformer. The unit offers analog inputs only (no DAC) and is projected to cost about $3500.