Along with Top Audio in Milan, Italy, the T.H.E Show Newport Beach in California is my favorite for a few special reasons. It's exclusively audio-oriented (as opposed to the massive CES), it's user-friendly (like Rocky Mountain), and it's in a great part of the world (like Top Audio). I went to graduate school and lived along its beaches for about five years back in the early '80s, so not only do I know my way around, but I can always read the silvery alphabet of the sea in any glance across its suburban landscape. Besides, I can usually count on fine weather, excellent food, live music, entertaining distractions (a cigar bar, a car show), and some important product debuts. T.H.E. Show Newport Beach ran for three days, May 30 to June 2, and took place at two adjoining hotels -- the Hilton and the Atrium -- across the street from the John Wayne Airport in Orange County. For this two-part blog post, I'll mainly cover new products in Part 1, while mostly talking about standout demos of established gear in Part 2. 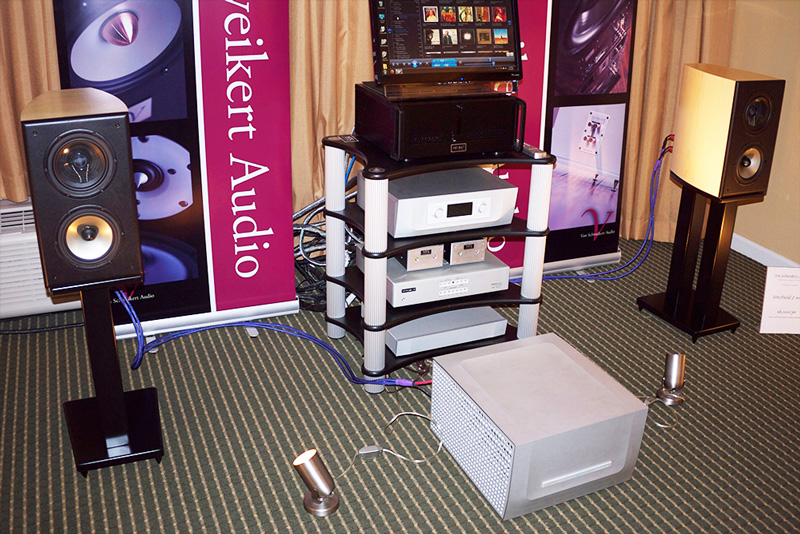 Seriously good sound smacked me upside the ears at the Von Schweikert Audio room in the Hilton right away. Albert Von Schweikert debuted his new UniField 2 speakers ($8000/pr., stands included), three-way bookshelf monitors in a handsome maple finish. Amplification came from Constellation Audio's outstanding Centaur stereo amp (250Wpc, $27,000) and Virgo preamp ($29,000) with outboard power supply. A YFS supercomputer ($14,000) and an EMM Labs DAC2X ($15,500) were the sources, and all cabling came from Master-Built. On the Grateful Dead's "Ripple," the sound was tactile with a mellow balance and a soundstage impressively deep and wide. Jerry Garcia's high lead vocal was quite airy, there were deft impacts to the pluckings of mandolin and guitar accompaniment, and Phil Lesh's electric bass was tight and timely. Coherence was a major feature here and, when I remarked on that, Albert pointed to the coaxial driver on top with a neodymium-powered tweeter embedded within the midrange. On the bottom was an SEAS custom woofer. Great new speaker. 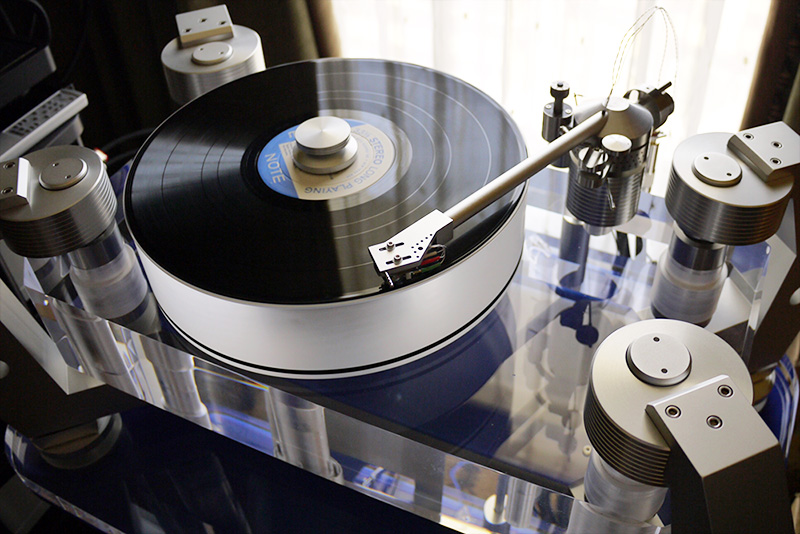 Down the hall I heard another fine demo, sponsored by local dealer Optimal Enchantment. This featured a pair of Vandersteen Sevens and reference-level electronics from Audio Research, but the new attraction was a showstopper -- a floorstanding turntable by Basis called the Work of Art ($179,000), featuring a regulated vacuum-hold system with remote pump and a syncro-wave power supply. What a stunning piece of industrial design! Included in the six-figure price is the new Vector Superarm 9 ($14,000 when sold separately). Both were being shown in the US for the first time. 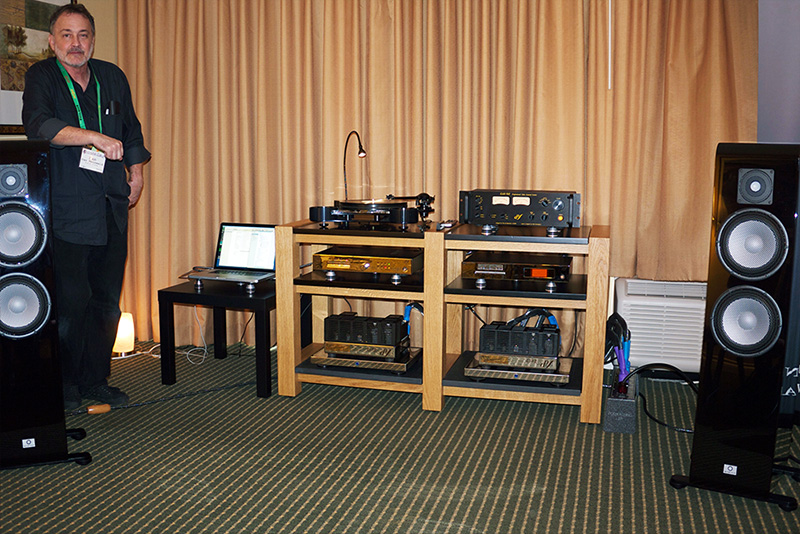 Dan Meinwald of EAR/USA and Sound Advice was showing off the new Marten Django L speakers. These have slightly smaller cabinets and one less driver than what's now called the Django XL, which debuted at CES 2012. Except for size, the new Django L speakers (88dB, 6 ohms; $9000/pr.) looked a lot like the Django XLs. They're a two-way bass-reflex design featuring two SEAS 8" aluminum woofers and an Accuton 1.25" ceramic tweeter. Gone is the dedicated midrange of the XL. The Ls were driven by EAR electronics with a MacBook Pro and the new EAR DACute 4 ($8000) as sources. When I was there, I heard decent bass-drum slam and great top-end clarity and sparkle on "The Rite of Spring" as performed the Kirov Orchestra conducted by Valery Gergiev, but -- no surprise -- I missed the balance and fuller bass to the orchestra that I was used to hearing from the larger, three-way Django XLs. 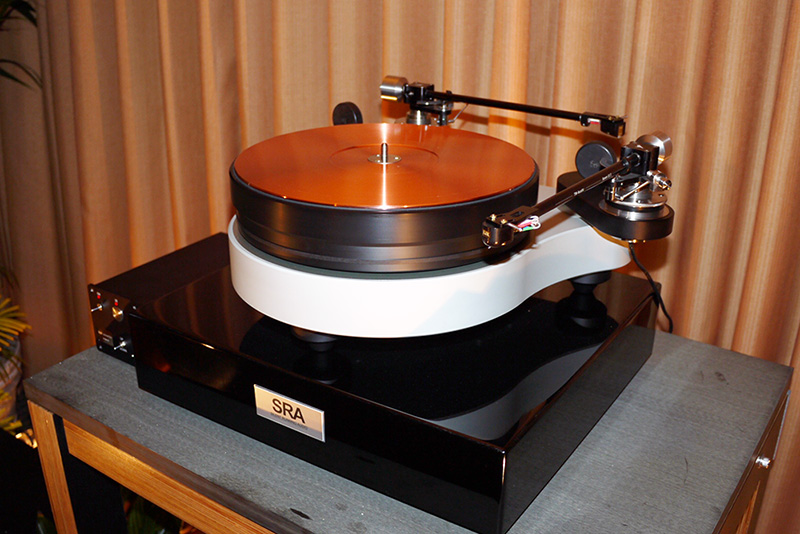 All the way from the foot of the Brooklyn Bridge in NYC where he has his loft showroom, Jeff Catalano of High Water Sound brought along a full system of Tron electronics. Stacked within a Silent Running Audio Scuttle rack were separate Tron mono and stereo phono stages (both $18,000) and a Tron Seven GT line stage ($18,000). A Tron Discovery GT SE 300B amp ($60,000) sat on an SRA Ohio XL base. Interconnects, speaker cables, and power cords were from High Fidelity Cables and Tel Wire. The Tron amp drove a pair of Cessaro Chopin speakers ($40,000) impressively adorned with outsized circular wooden horns. But the coolest thing was the brand new TW-Acustic Raven GTS turntable ($12,500) and its eye-catching silver plinth that set off the black platter and copper platter mat. The price also includes the oversize feet from the Raven Black Knight 'table, an upgrade. Mounted were two Raven 10.5 tonearms ($5500 ea.), both with Miyajima cartridges -- one the stereo Shilabe ($3000), the other the mono Zero ($2000). The recordings I heard were all acoustic music -- at first a female singer and acoustic guitar, both very lifelike on mono, then a fabulous version of Albinoni's Adagio in G minor in stereo LP, featuring a bass solo that demonstrated fine tonality and a big, open sound with both impact and great presence. 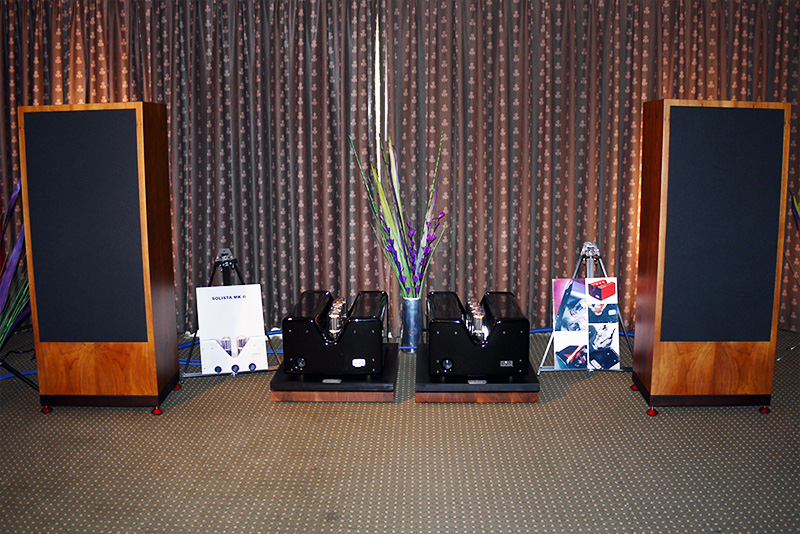 Over at the Atrium Hotel next door, Profundo Audio sponsored a room featuring brand new Trenner & Friedl speakers, Viva electronics, a Heed Audio DT digital transport, a Heed DA DAC, and an Audio Strata rack and amp stands. Making its debut was the Trenner & Friedl Isis speaker (91dB, 6 ohms; $40,000/pr.), a largish three-way with a big 15" woofer, an 8" paper-cone midrange, and a .75" horn-loaded compression-driver tweeter, its titanium diaphragm coated with tin. With a cabinet built of multiply birchwood of different densities and available in various walnut finishes, the Isis is said to be able to be placed close to walls. Indeed, Bob Clarke of Profundo had positioned these speakers within 2' of the front wall and maybe 3.5' of each of the sidewalls. 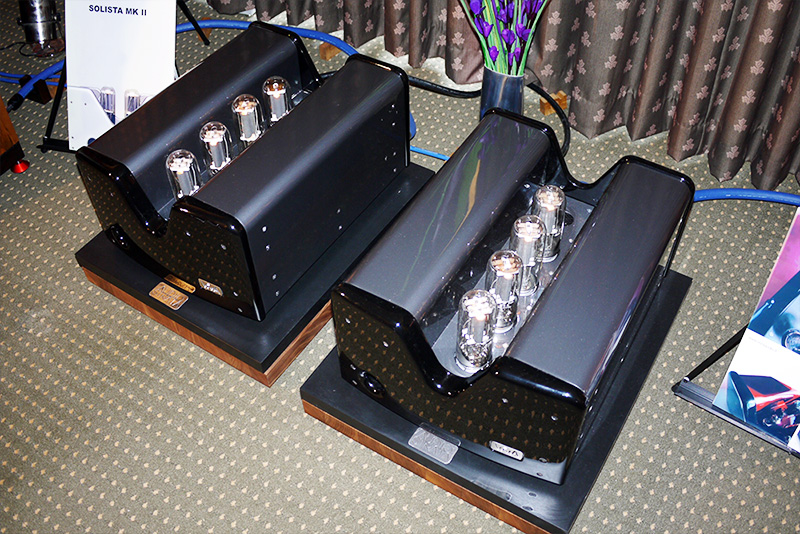 Also making their debut were Viva Audio Aurora monoblocks (36Wpc; $43,500/pr.), each an imposing piece of kit featuring SET class-A operation, a directly heated 845 triode output tube, a 211 driver tube, and two more 845 tubes for rectification/power supply. The Profundo system sounded splendid, showing no strain and lots of headroom on several tracks from my demo CD, easily handling tutti passages from a full orchestra. I found the tonal balance slightly dark but eminently pleasing and easy on the ears. Midrange attacks and trilling on a performance of the Beethoven Piano Concerto No. 4 were ever so slightly soft, but arpeggios were fast, and left-hand chordings dug deep with strong impacts and impressive resonances. But when Bob switched to analog, using a Basis 2200 turntable with Vector 4 tonearm and a Transfiguration Proteus phono cartridge ($6000) feeding a Viva Fono phono stage ($16,500), the system took a big step up, chasing away all that softness of attack I'd heard on digital. Hugh Masekela's "Stimela" sounded rousing, astoundingly clear, and thunderous, with the impacts from a kick drum and electric funk bass thumping against my chest and the brilliance and bloom of Masekela's flugelhorn sailing sweetly into the room. 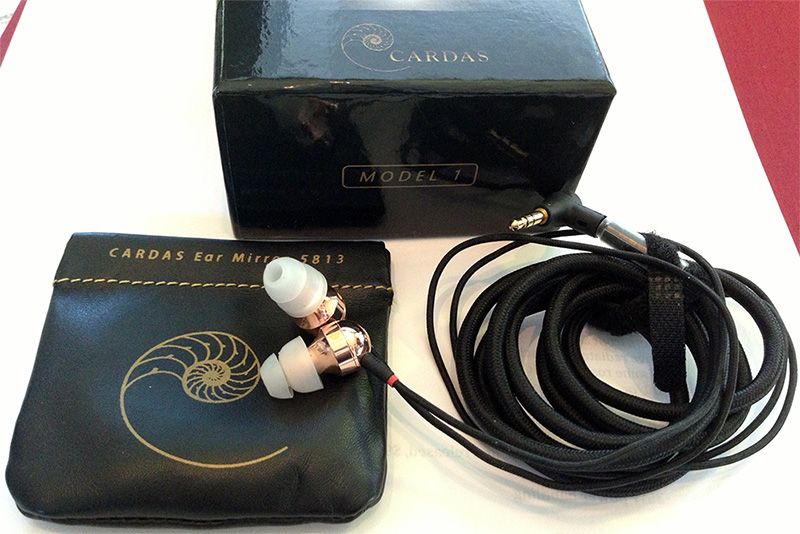 Andy Regan of Cardas Audio came up and surprised me while I was sitting in Brian Berdan's Audio Element room at the Atrium. He wanted me to be sure to try the new Cardas Ear Speakers just making their debut. After I finished up in Brian's room, I dropped by Andy's Cardas table in the hallway just outside, and he fitted me up with a pair of the EM5813 Model 1 earbuds ($325). Wow! I uttered some expletive that made the small crowd around me crack up. I couldn't hear them, but I saw they were laughing. I plucked one of the Ear Speakers out and Andy said, "Can I quote you?" What'd I say? I asked. "Fucking cool!" Andy answered, nodding his head, laughing some more. And they are that. More substantial than most in-ear monitors, the EM5813 Model 1 uses Cardas Clear Light headphone cable, a gold-plated 90-degree 6.5mm plug, and custom alloys, magnets, and film sourced from Europe and Asia. They weigh a bit in your hand and the cables are thick. I loved them immediately and insisted I take a pair home. Andy obliged. Real music accompanies me now whether on the plane or in my office at school. These 'buds are good! 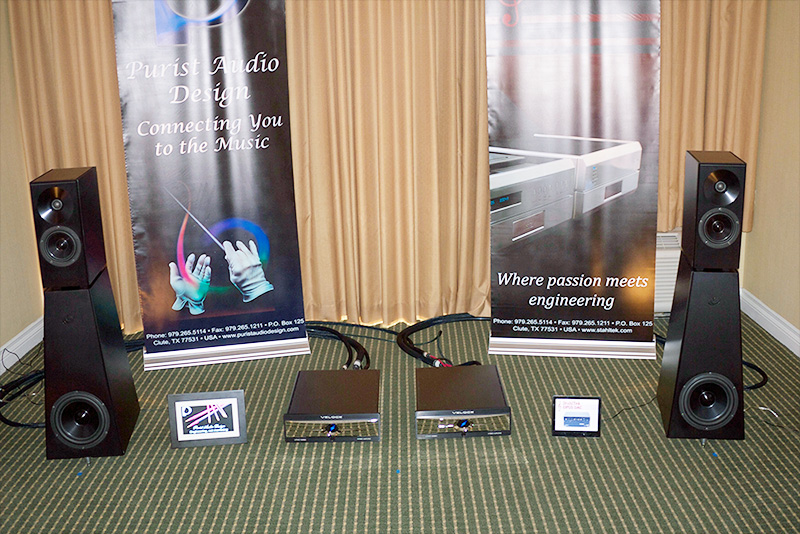 Back at the Hilton, I was delighted to hear a system of fairly well-known gear assembled by Veloce Audio. It featured Veloce's own electronics, cabling by Purist Audio, and YG Acoustics Kipod II Signature speakers ($49,000/pr.). Rather than depend on AC power from the wall, notoriously capricious and sound-killing at times, Veloce's solution is to use battery power for amplification. I've heard such gear in the past, and each time it seemed to me they lacked a bit for slam, speed, and tonal saturation. But Veloce takes battery power to an entirely new level with their Lithio LS1 tube line stage ($18,000) and Lithio Saetta tube/solid-state hybrid monoblock amps (480Wpc, $18,000/pr.). The Lithio preamp can run up to 150 hours on a charge and the Lithio Saetta monos from 40-80 hours. With a Stahl~Tek Ariaa DAC as source, I heard a swing band piece featuring a clarinet that sounded like Benny Goodman. The sound was superb -- a sweet and woody clarinet solo, fluent rhythmically, brash and punchy choruses from the brass and saxophones, and lots of headroom to power through its most dynamic passages. I only wish I could have stayed to ask to try my own demo tracks, but it was the end of the day, and I had to pack it in.