For this second part of my Newport coverage, I focused on outstanding demos, mainly from systems with established gear, but also including one hot new product in the personal-audio category. Interestingly, all but one system was analog-based or from the analog option in their setup. And all were at the Atrium Hotel. It did seem to me that, in general and for what it's worth, there tended to be better sound over at the Atrium than at the Hilton. 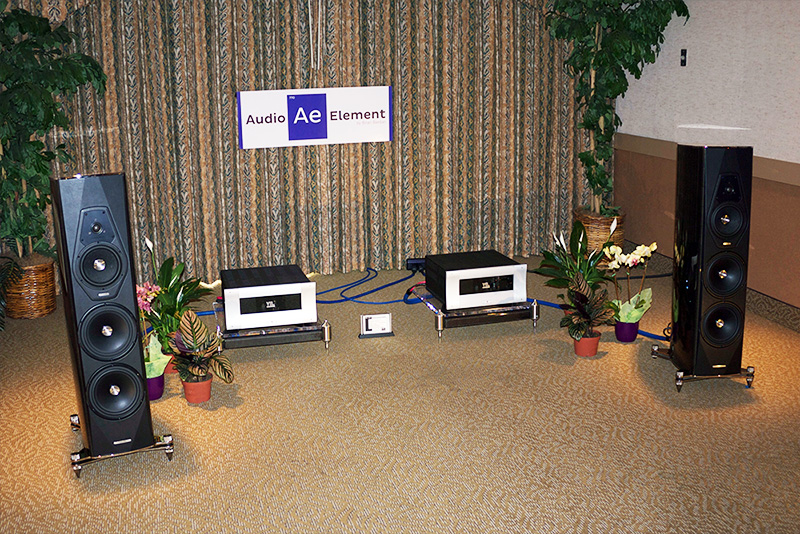 To announce the forthcoming opening of Audio Element, his new brick-and-mortar store in Pasadena, California, Brian Berdan sponsored a fine demo in a largish corner room at the Atrium. In it were some exceptional electronics from VTL, dCS digital, Sonus Faber speakers, Cardas cabling, and Grand Prix turntable, racks, and stands. Since their US debut at RMAF 2011, I'd read many appreciative reviews of the Sonus Faber Amati Futura speakers (90dB, 4 ohms; $36,000/pr.), but I've not been impressed until this show. It must have had something to do with Brian's expert setup, but also with the VTL electronics and the synergy and pure excellence of the rest of this fine system: VTL MB-450 Series III Signature monoblocks ($18,000/pr.), VTL TL-7.5 Series III line stage ($20,000), VTL TP-6.5 phono ($8500), dCS Vivaldi system ($108,496 total), Grand Prix Monaco turntable ($23,500), Tri-Planar tonearm ($5800), Lyra Skala cartridge ($3995), Grand Prix Silverstone S44-4 racks ($17,075), Grand Prix Monaco 4T rack ($6450), Grand Prix Audio Monaco platforms ($1950/ea.), and $35,000 worth of Cardas Clear and Clear Beyond cables. Together, these created a lovely oasis of music on a DGG LP Luke Manley selected for me. It was of Arturo Benedetti Michelangeli performing the Beethoven Piano Concerto No. 1 with the Vienna Philharmonic, Carlo Maria Giulini conducting. There was great depth to the soundstage and clarity within it, a fine and saturated tone to the piano with lovely decays, and its hammer strikes and sticking were both very audible. Cellos and basses created a fine pulse to the musical line, and there was a sweetness to the flute as it carried over the top of the music. Orchestral tutti were thrilling and clear all the way through dynamic peaks. What a demo! In my notes, I wrote Best in Show. 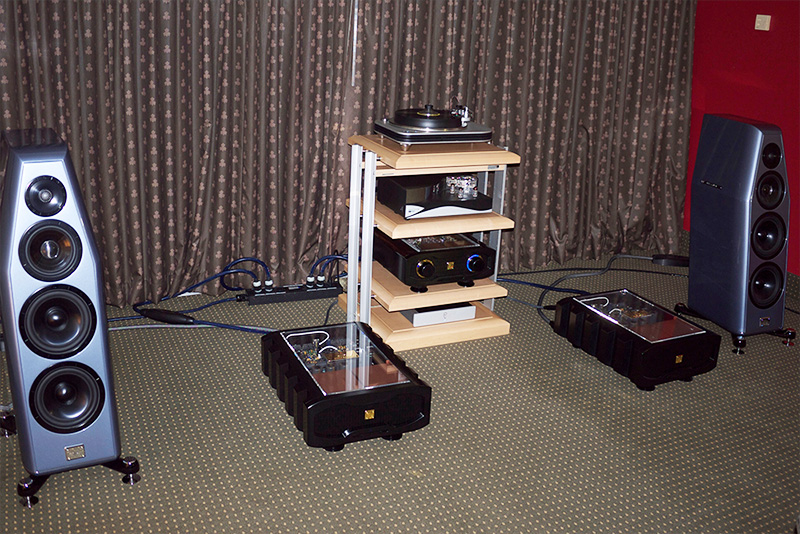 Close by, I heard yet another wonderful demo, this one of Kharma speakers and electronics assembled by Michael Woods of Elite Audio Systems in San Francisco. As with the Sonus Faber Amati Futura speakers, I'd not until this year's Newport show heard a demo of Kharma speakers I could say I liked. Something about the way Kharma used ceramic drivers, maybe, as I've been impressed with speakers from other manufacturers who use ceramic drivers (Marten, Lumen White, Tidal, et al). But this time, I enjoyed every minute I spent in the Kharma room. Playing was a track of acoustic jazz -- a piano trio plus a trumpet soloist -- and I thought the sound liquid, speedy, and completely coherent. The presentation was lively and resolving, with very nice plosive impacts from the trumpet and authoritative chording from the piano in the fills, brilliant arpeggios, and trills when it took a solo. The setup consisted of Kharma Elegance DB9 Signature speakers (three-way, 89dB, 4 ohms; $37,000/pr.) driven by Kharma MP 1000 Exquisite Signature mono amps (400Wpc, $96,000/pr.), Kharma Exquisite M 7000 preamp ($48,000), Zesto Andros phono stage, Spiral Groove SG1 turntable, Dynavector 20-2XL cartridge ($850), Finite Elemente Pagode Master Reference rack, and Transparent cabling. Kharma's switch from a ceramic to a carbon-fiber midrange (with a beryllium tweeter and two aluminum woofers) seemed to have made a big difference, but I was equally impressed with Kharma's class-A monoblocks. 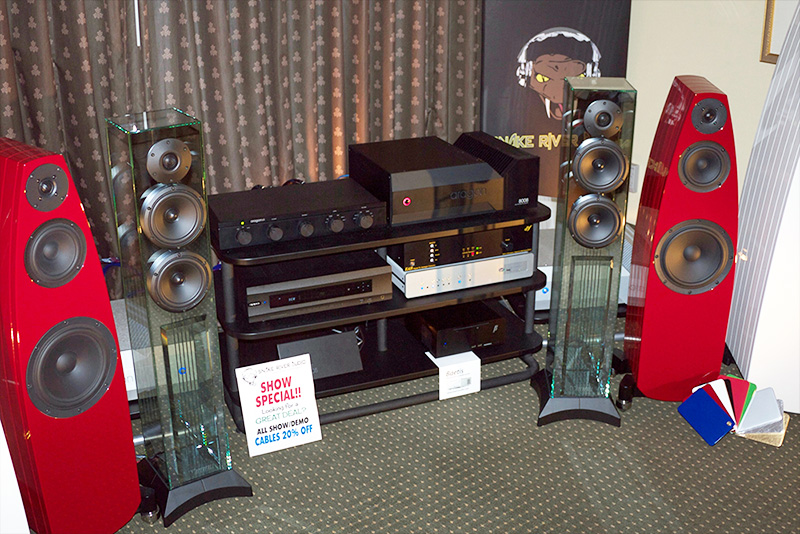 In a category of fine-sounding, affordable, compact, and eminently attractive floorstanding speakers, I made a new (to me) discovery in Waterfall Audio's Victoria Evo ($7000/pr.) -- a handsome three-way with four drivers and striking, transparent cabinets made of 6mm high-density Krystaline glass. Manufactured in France, these were 89dB/6-ohm transducers with a down-firing 8" passive radiator that handled the lows, two 6" woofers (one for midrange and the other for midbass), and a neodymium tweeter. With electronics from the reconstituted Aragon and Acurus, and cabling from Snake River Audio, the sound was liquid and gorgeous on acoustic jazz. I found these speakers thoroughly enjoyable with great touch and presence. 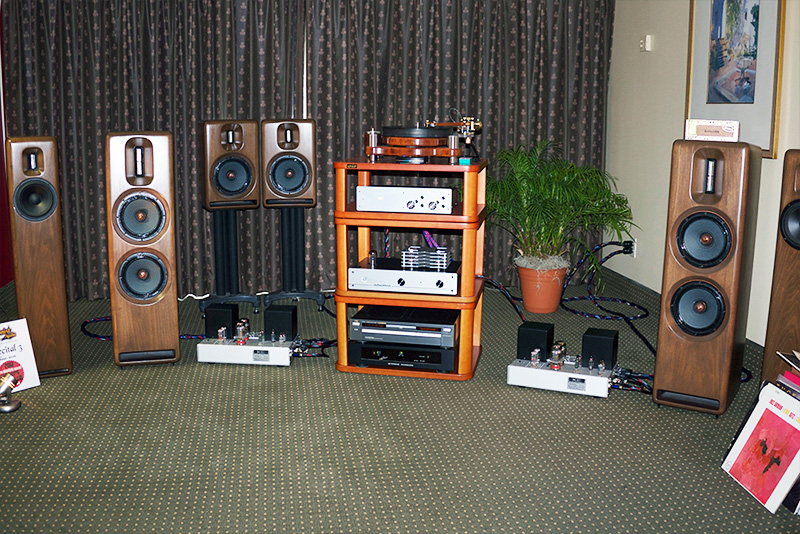 Jonny Wilson of Snake River Audio, a designer and manufacturer of fine audio cables, created a special tribute to Sonist Loudspeakers founder Randy Bankert, who passed away recently. Wilson has taken over the Sonist brand and, just for this show, created tribute editions of all speakers in the Sonist line, coming up with a special Cigar finish that recalls one of Bankert's passions other than audio. Over the years I've enjoyed many a Cuban with Randy, and I found the symbolic remembrance handsome and fitting. But besides the new finish, Wilson has contributed an important improvement to Bankert's already good-sounding, very affordable speakers -- he's replaced the standard 22-gauge internal copper wiring with his own Snake River 12-gauge blended gold/silver/OFHC copper wire. 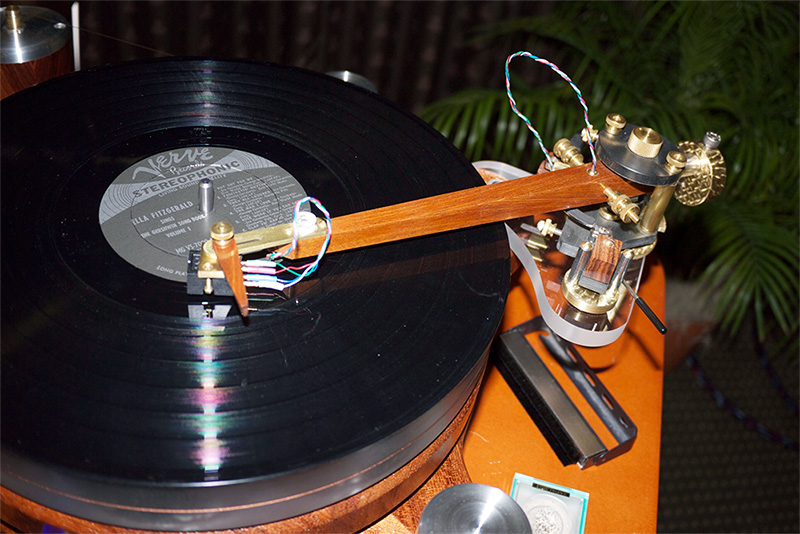 And the result? Well, with seriously good electronics from deHavilland Electric Amplifier (my reference gear, after all) and an analog source consisting of a George Warren turntable fitted with a Pete Riggle Audio Engineering Woody tonearm ($1600) and the inexpensive but fine-sounding Denon 103-R cartridge, I heard rich tonal colors on a Tuck & Patti LP that might be characterized as almost "thick" were it not for the clear and sparkling highs from the ribbon tweeter of the Sonist Concerto 4 (97dB, 6 ohms; $5895/pr.). The impacts from Tuck's strumming and slaps on his hollow-bodied electric guitar strings came fast and had all the snap and harmonics of the real thing. And on the Hendrix classic "Castles Made of Sand," Patti's lush alto sounded the best I'd ever heard it. 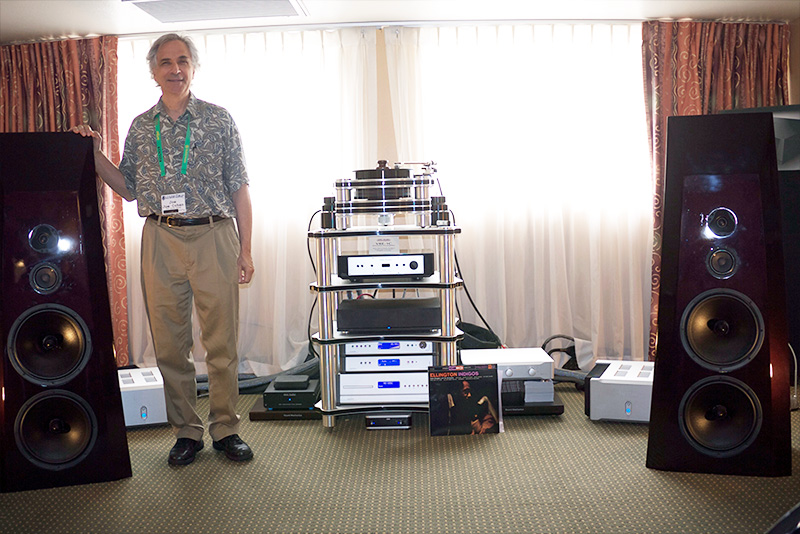 Before I even stepped into the Lotus Group room, I heard familiar strains of a jazz orchestra beckoning me to come in from the hallway and just relax. It was Duke Ellington's. Joe Cohen of Lotus Group brought the latest iteration of his open-baffle, three-way Granada 2 speakers ($75,000/pr.) and put them together with a killer analog system consisting of an Esoteric E-03 phono stage ($5950), SMc VRE-1C line stage ($16,950), two Esoteric A-03 stereo amps (I assume bridged for mono; $25,000/ea.), a Hanss T-60 turntable ($8250) with Durand Telos tonearm ($19,500), and the new Ortofon Anna MC cartridge ($8499). All cabling, of course, was by PranaWire, and line conditioning too, as PranaWire Linebacker passive power filters ($2250/ea.) with the new Super Enhanced Ground Plane ($600/ea.) were stationed judiciously throughout the system. Joe was spinning a re-issue of Ellington Indigos, and I sat through the whole B-side just enjoying the saturated tones, overall musicality, and bountiful harmonics of each successive tune.

For the morning of the last day of the show, I did something I never do -- I'd made an appointment to meet with a representative from a manufacturer. Usually, I like to be free to roam and avoid making dates, but something told me I'd better get a tutorial on a new and exciting product from Astell&Kern -- the dual-mono, twin-DAC AK120 portable music player (64GB, $1299) -- that was to make its American debut at Newport. Jeff Fritz had tipped me that it had created quite a buzz at the Munich show in May, and I'd seen a photo of our publisher, Doug Schneider, holding one in the palm of his hand on SoundStage! Global. I got to the appointment on the mezzanine of the Atrium a bit early, so I browsed through the headphones lined up on the demo table and started listening to the AK120 right away -- through Audeze LCD2 headphones first, next Final Audio Design Pandoras, and (finally) Sennheiser HD 650s (my reference). The AK120's operation was completely intuitive, as you simply power the handy gizmo on, flip through the offerings on its touchscreen menu, tap on your selection, then settle into the sound. No tutorial! I chose to hear Allegro energico, ma non troppo from Mahler's Symphony No. 6, performed by the Budapest Festival Orchestra conducted by Ivan Fischer. The readout file was 24/88.2, and its sound via the Audeze 'phones was phenomenal! Great string tone and definition -- smooth and rich with a fineness of detail in the shifts of notes and volume. What's more, there were sweep and scale to the orchestra, the whole presentation sounding very natural. I was impressed. The other two 'phones demonstrated dramatic differences -- the Pandora sounding more forward, even tipped up to my ears; the Sennheiser sounding good but muffled in the bass. What was certain was the AK120 was a superb source, DAC, and headphone amp! 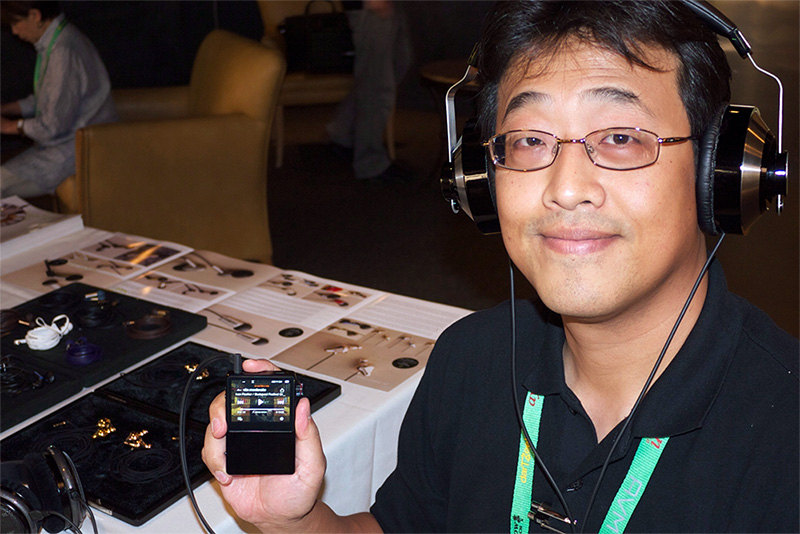 Owen Kwon arrived and explained that iriver, Astell&Kern's parent company, had wanted to create a player that produced mastering-quality sound. After 2.5 years in development, they had their "MSQ" player, and the single-DAC AK100 (32GB, $699) was introduced in the US at CES 2013. Both A&K players use the Wolfson WMB8740 DAC and support files up to 24/192. They have about 14 hours of rechargeable battery life and sport a 2.4" QVGA IPS touchscreen. In addition to their internal flash memories, both can add up to 64GB via slots for two 32GB microSD cards. And the players weigh only five ounces! The AK120 is a very exciting new product. Look for my complete review very soon. 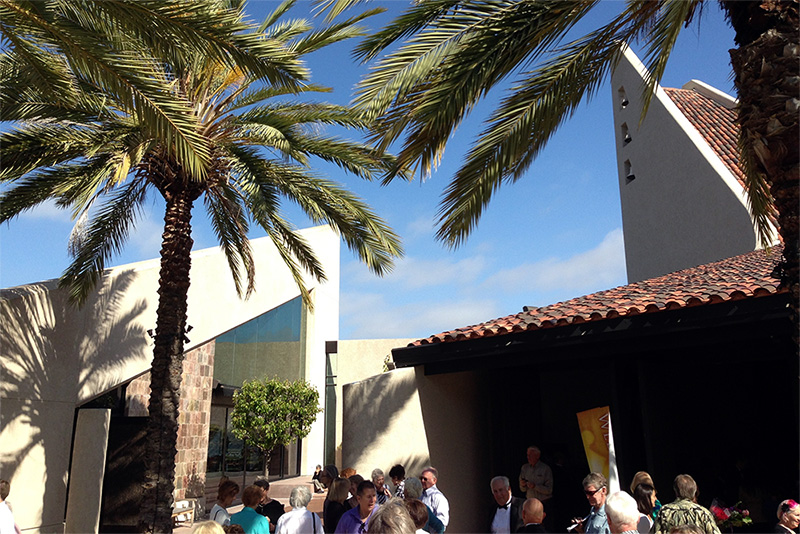 I closed out my weekend meeting old graduate school friends to attend a live concert performed by the Master Chorale of Saddleback Valley and the Orchestra of St. Agnes, two wonderful groups local to Orange County. It was held during the late afternoon at the Geneva Presbyterian Church in Laguna Woods, a lovely and intimate venue just a 12-minute drive via freeway from the show. I heard Schicksalslied ("Song of Destiny"), by Brahms, performed with sumptuous strings, beautiful woodwinds, and a fine choir. But the highlight was the Mozart Requiem Mass in D minor, that magnificent composition of 14 grave and sublime movements Mozart never finished himself, but was "completed" by Franz Xaver Süssmayr after Mozart's death. The performance was beautiful and uplifting, with four splendid solo singers as well as choir and orchestra, and afterwards, walking out into the brilliant and slanting light of 5 o'clock, soft slices of SoCal's azure sky seemed to fall from between the scissoring leaves of the palm trees above. Small, lucent scarves of Mozart's melodies spun in the onshore breezes as I walked to the parking lot and stepped into my rental car for the drive back to the airport.