Insofar as physical media products go, few audiophiles care about CDs anymore. I don’t think they ever will again. But vinyl -- that’s a totally different story. It’s back, it’s big, and it’s getting better. 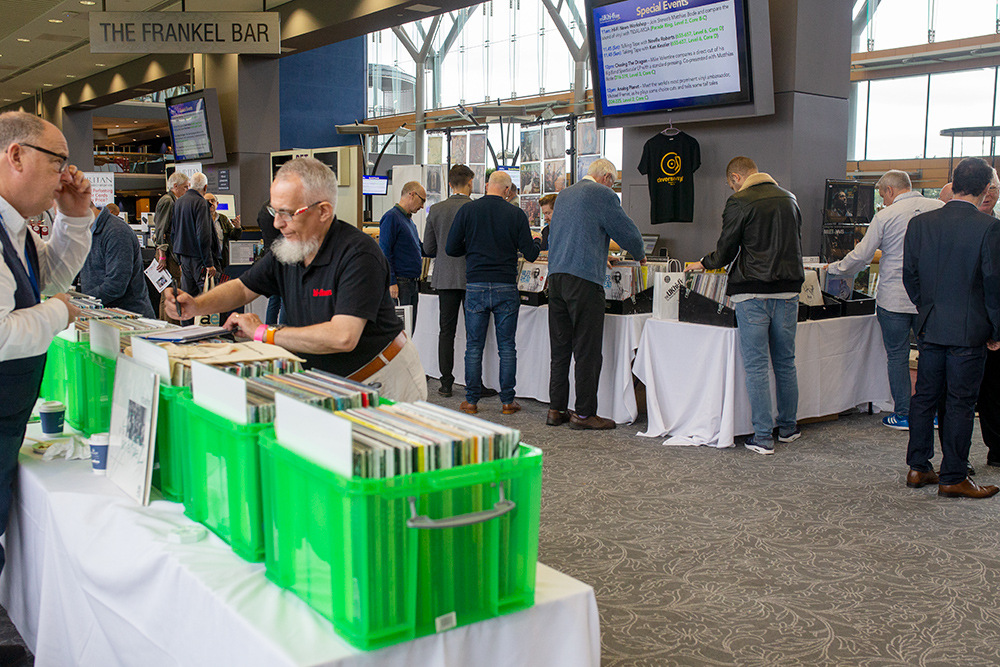 Not surprisingly, vinyl sales were brisk at UK Hi-Fi Show Live 2019, with sellers focusing their display efforts on special reissues and higher-priced collectables -- stuff that sells for far more than a few bucks. There were also a number of turntables and related products, the focus of this article. Warning, though -- none of this stuff is cheap, which surprised me a little. I expected to see at least a few three-digit turntable-related products, not just four- and five-digit stuff. Maybe I just missed them -- or maybe they really weren’t there. All prices are in British pounds (£). 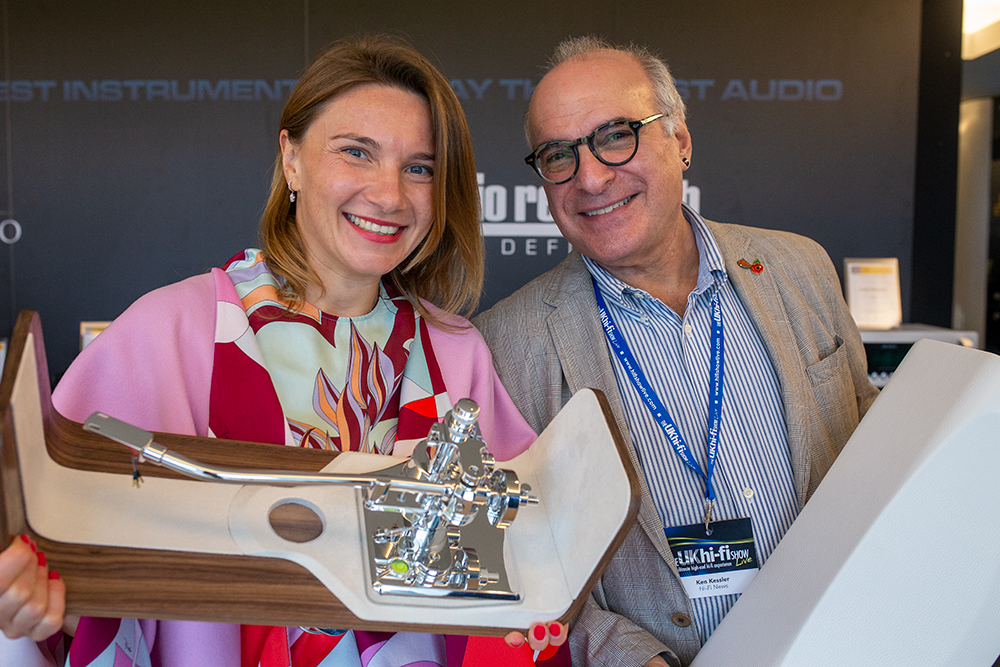 Jozefina Lichtenegger, the wife of Pro-Ject Audio Systems’ owner, Heinz Lichtenegger, is the founder and CEO of European Audio Team, or EAT for short. The company is based in Austria, with most of its manufacturing taking place in the Czech Republic. The F-Note 12" tonearm (£6990) seen in the photo isn’t new -- we covered its debut at High End 2019, in May. But the packaging pieces she and writer Ken Kessler are holding are new, and Jozefina wished to show them off for two reasons. Obviously, she wanted to show how well the tonearm comes packaged. But she also wanted to relate what EAT learned creating the package. “The way we bent the wood,” she told me, “might find its way into future turntable products.” 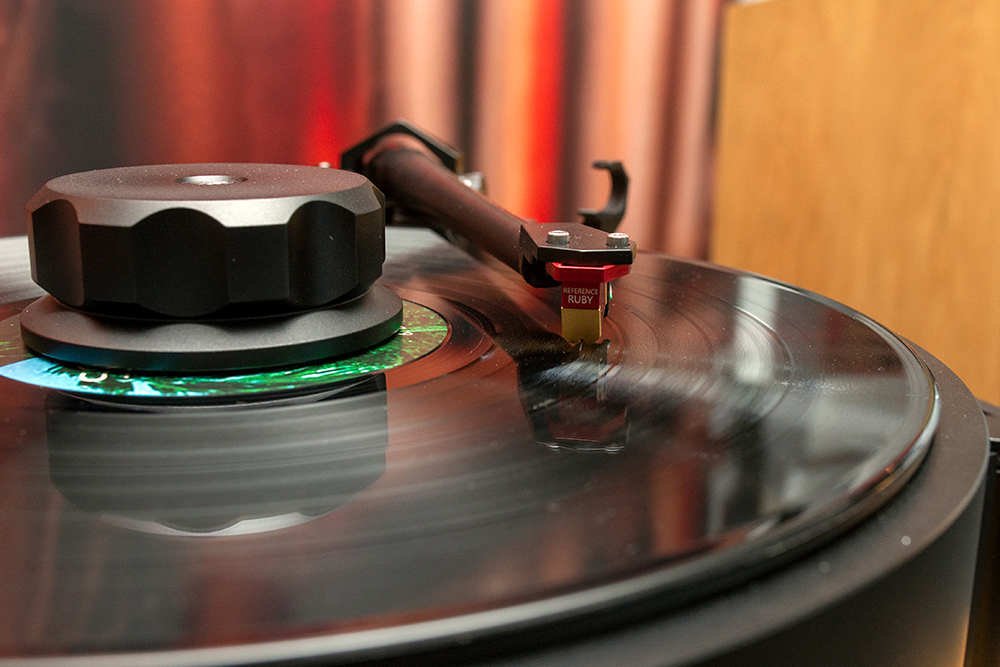 The UK’s AVID, whose integrated amplifiers and speakers I already covered, showed its first cartridge. Priced at a lofty £6000 and named for its solid-ruby cantilever, the Reference Ruby is a low-output moving-coil design that weighs 9.1g. I learned that AVID sold out its first run of Rubys, so even though the product is already available, you can’t actually get one right away. But AVID will be producing more Ruby cartridges -- as well as two other moving-coil designs -- in the near future. 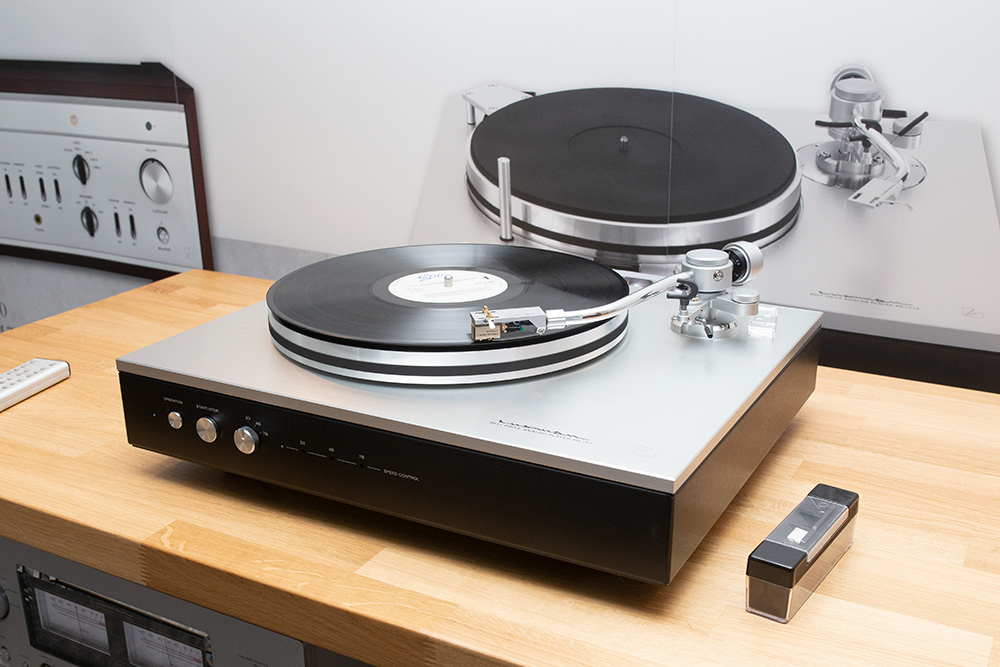 The most affordable turntable I found was the belt-drive Luxman PD-151, which was introduced earlier this year and is priced at £4500, with tonearm but no cartridge. That’s not cheap, but the PD-151 looks to be worth every penny. It’s beautifully styled and superbly built, plus it uses first-rate parts. Those include a 10mm-thick machined-aluminum top panel, a 4kg platter, and a newly developed DC motor that the company says helps it achieve wow and flutter of less than 0.04%. The tonearm is made by Jelco, also based in Japan. One more thing: the photo above shows no dust cover, and the rep in the room told me that in some markets, a dust cover costs extra. In the UK, even though the PD-151 wasn’t shown with one this weekend, a dust cover comes in the box at no extra charge. 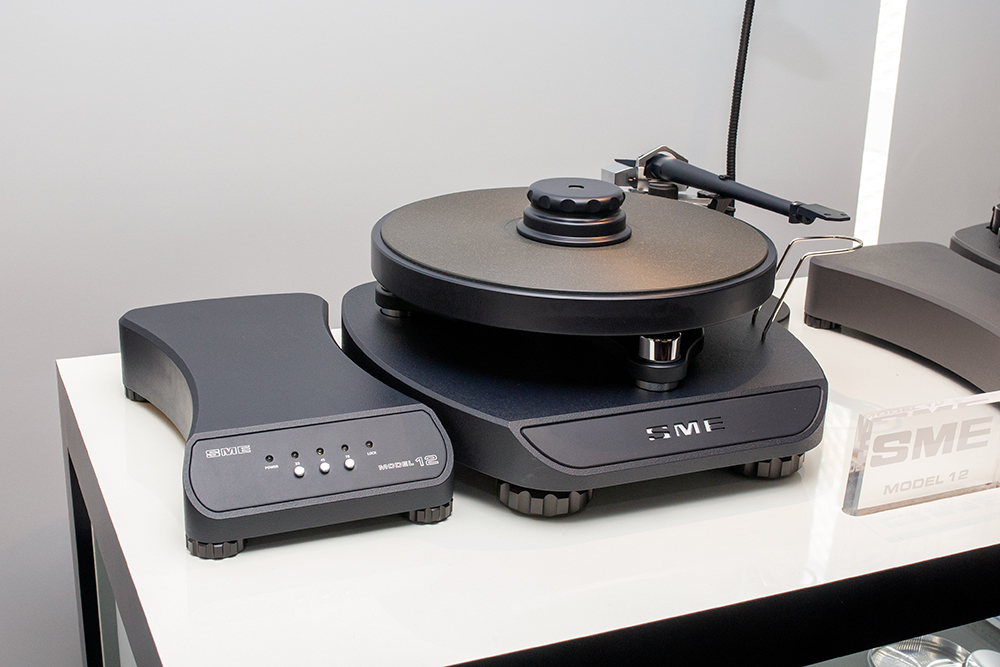 The UK’s SME was on hand with its new Model 12 turntable (£7450), which comes with an SME 309 tonearm, Crystal Cable wiring throughout, and no cartridge. While the motor is part of the main turntable, the speed-control circuitry (33 1/3, 45, and 78rpm are supported) is housed in a separate case, and allows not only for the main speed selection but also for fine-tuning of the speed in increments or decrements of 0.01%. The Model 12 comes in a choice of three colors: black, grey, and blue. In case you think blue might look a little too bold in your room, I seriously doubt that will be the case -- I had trouble believing the blue version, shown above, wasn’t the black-finished one when I was looking at it on its own. It was only when the rep put something black on top of the blue finish that I could see that it was actually blue -- but it wasn’t that blue. If I were to buy a Model 12, it’s probably the color I’d get. 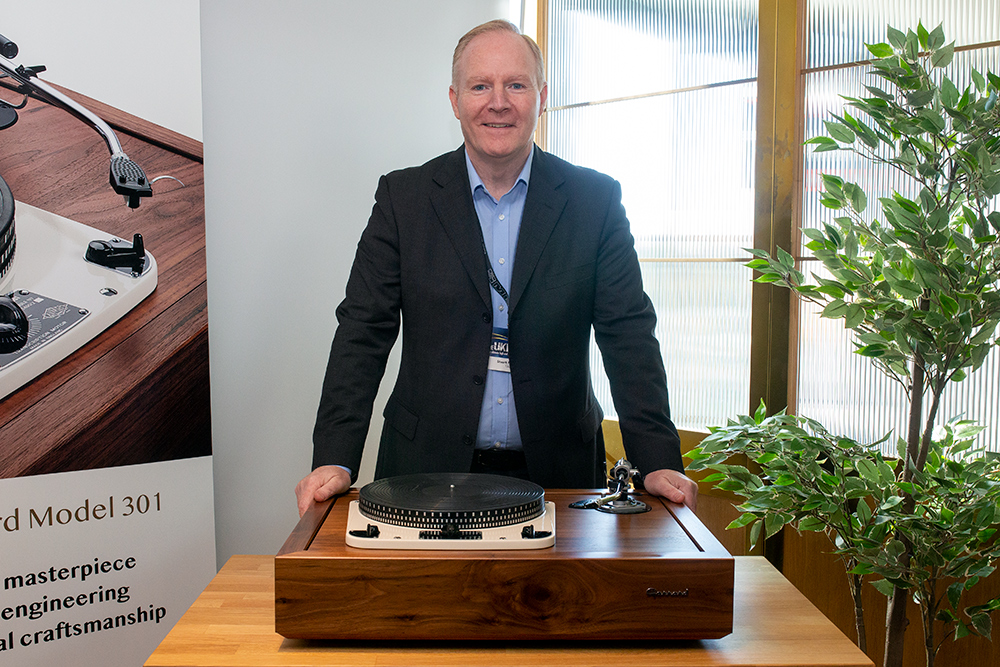 SME is also part of what I consider the biggest turntable story of this show -- the acquisition of Garrard and the “revival” of the legendary Model 301 turntable. SME’s CEO, Stuart McNeilis, who can be seen with the new Model 301 in the photo above, gave me the entire story, which I’ll condense below.

Garrard was originally founded in 1915 as Garrard Engineering and Manufacturing Company, and it was located in Swindon, England. Garrard was formed to manufacture artillery rangefinders for the British Army -- a vital function, since World War I was raging. After the war, the company had to find something else to do, so Garrard began developing electric motors, and then many years later it got into turntables.

According to McNeilis, the original Model 301, with its famous Transcription Motor, debuted in 1954, and was aimed at serious hobbyists. All buyers got was the turntable itself -- chassis, motor, platter, controls, etc. They had to add their own plinth, tonearm, and cartridge. SME sees the Model 301 project as a way to revive the Garrard brand before offering newer designs. The Model 301s are being built at a new facility in Swindon, where Garrard began operations more than a century ago. 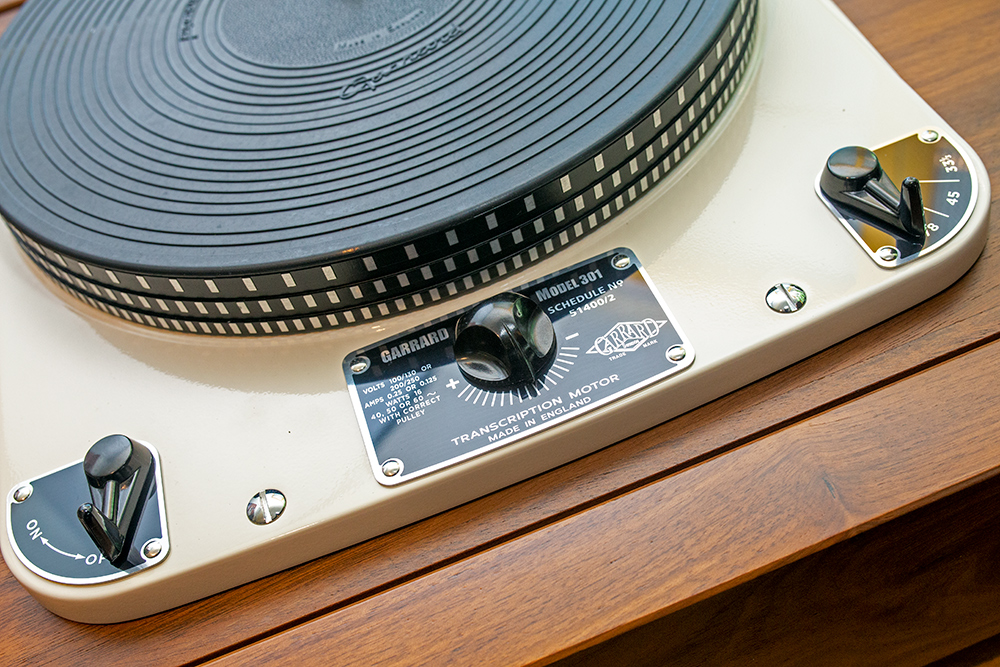 Part of the deal when SME bought the Garrard brand was a boatload of parts and machinery. As a result, the company is factory-refurbishing new-old-stock Model 301s. It’s now adding an elaborate walnut plinth that contains three “tiers of isolation” for the feet, motor board, and tonearm, as well as an SME M2-12R tonearm (but no cartridge).

Even though the plinth and tonearm are new, McNeilis was adamant about being as faithful as possible to the product during its heyday. While the company is refurbishing these old parts and bringing them up to spec, it’s not re-engineering them. McNeilis told me that the Model 301 was already an incredible performer, so no re-engineering is needed. As to the plinth’s finish, back in the 1950s, customers would have used oil-based paint products on their custom-built plinths. These aren’t used today, but Garrard is trying to replicate the exact look that an oil-based product would give. The rubber platter mat is also being made using the same design and rubber formulation as the one in the ’50s. 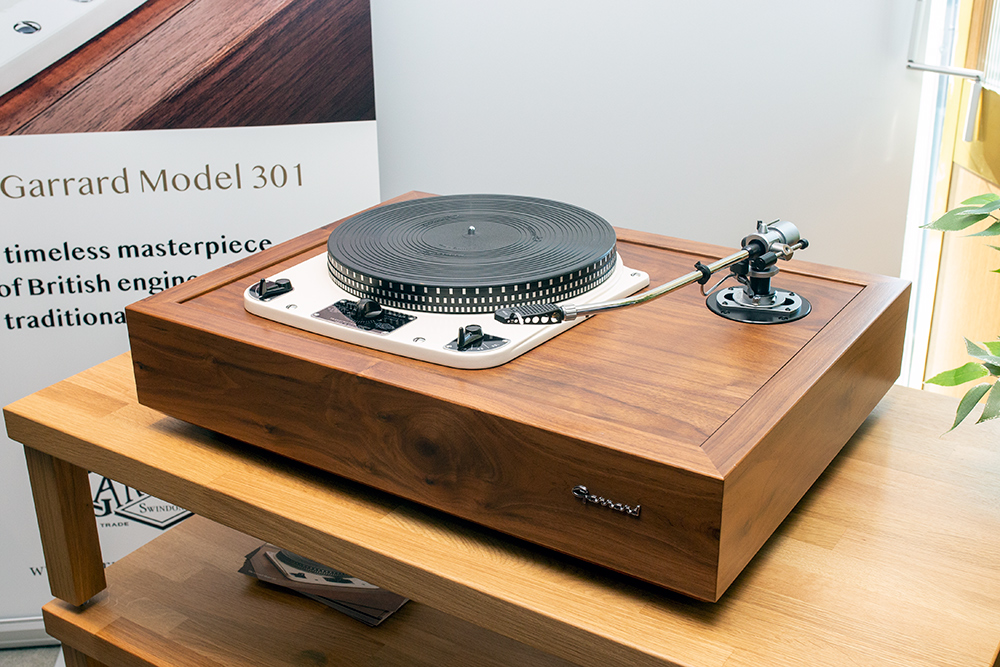 Some might find the new Model 301’s price -- £18,800 -- expensive, but I find it very reasonable given all the work that’s gone into reviving this legendary turntable and brand name. If you want a revived Model 301, now is the time to grab one -- there are only so many old parts, so it’s going to be a limited run.