In my first UK Hi-Fi Show Live report, about electronics, I mentioned that show organizer Paul Miller moved this annual event from a hotel to the upscale Ascot Racecourse. I think that this was the smartest decision Miller could’ve made. If you’re going to showcase high-priced hi-fi gear -- and let’s face it: even entry-level hi-fi is priced way beyond what most people are willing to spend on sound equipment -- you’d better do so in a fitting location rather than a bunch of makeshift bedrooms-turned-soundrooms.

There’s more to say about Ascot -- I have since learned from Miller that this is the first time that any rooms above the concourse area have been used for a publicly accessible event (there are four floors of hi-fi exhibits). Normally, these areas are reserved strictly for private-box patrons. I have a sneaking suspicion that this event will remain at Ascot for a long, long time. 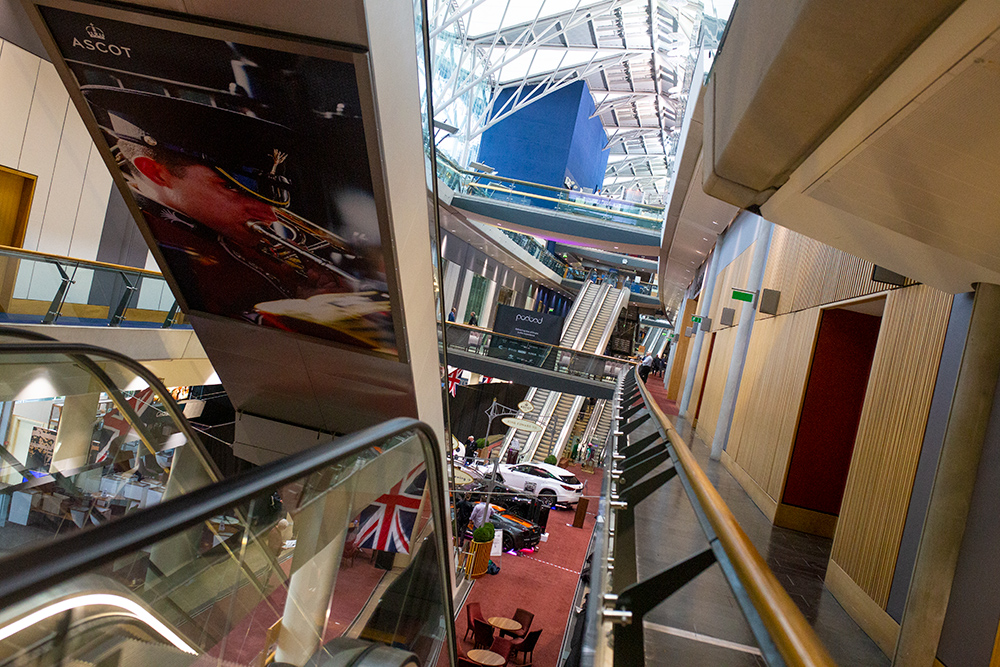 This article focuses on new and/or interesting loudspeakers that I saw on October 26. Most, but not all, came from Britain. This isn’t surprising, not just because this is a British show, but because the British loudspeaker industry has been strong for a very long time. All prices are in British pounds (£) unless noted. 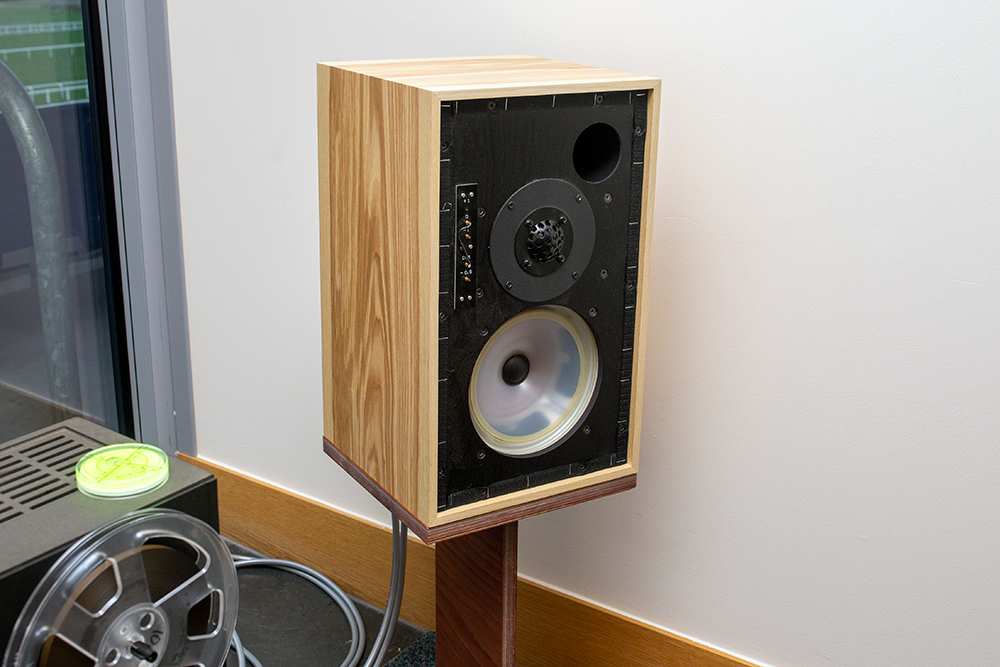 The first new loudspeaker I saw was British in every way. Rogers, a UK brand founded in 1947, has released a new LS5/9, which was originally designed by the British Broadcasting Corporation (BBC) Research Department in the early 1980s, for use by the broadcaster, as well as for licensing to private companies wanting to build it. You can still download the BBC’s LS5/9 spec at downloads.bbc.co.uk/rd/pubs/reports/1983-10.pdf 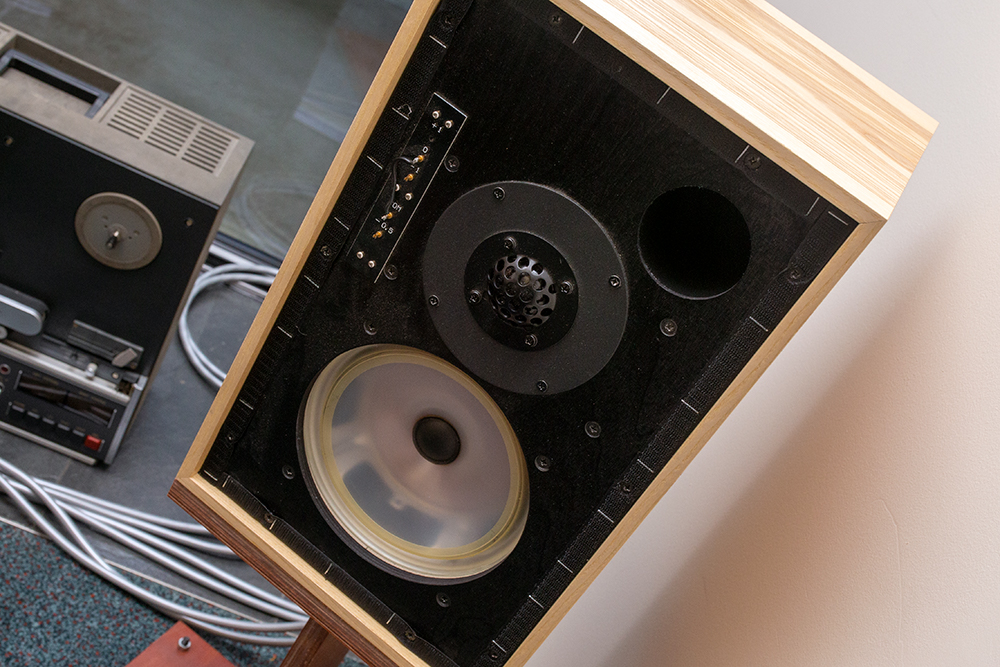 Rogers continually produced the LS5/9 from the ’80s until about 1995 and then discontinued it. Now that they’ve revived it, true to form, it has been built to the BBC’s spec, with a 34mm (1.34") soft-dome tweeter, which is made by Audax, and a 200mm (7.87") plastic-cone woofer made by Rogers. A jumper and a series of posts to the left of the tweeter can tweak its output up or down. The LS5/9 shown at Ascot was in the Olive finish, which I thought looked attractive. 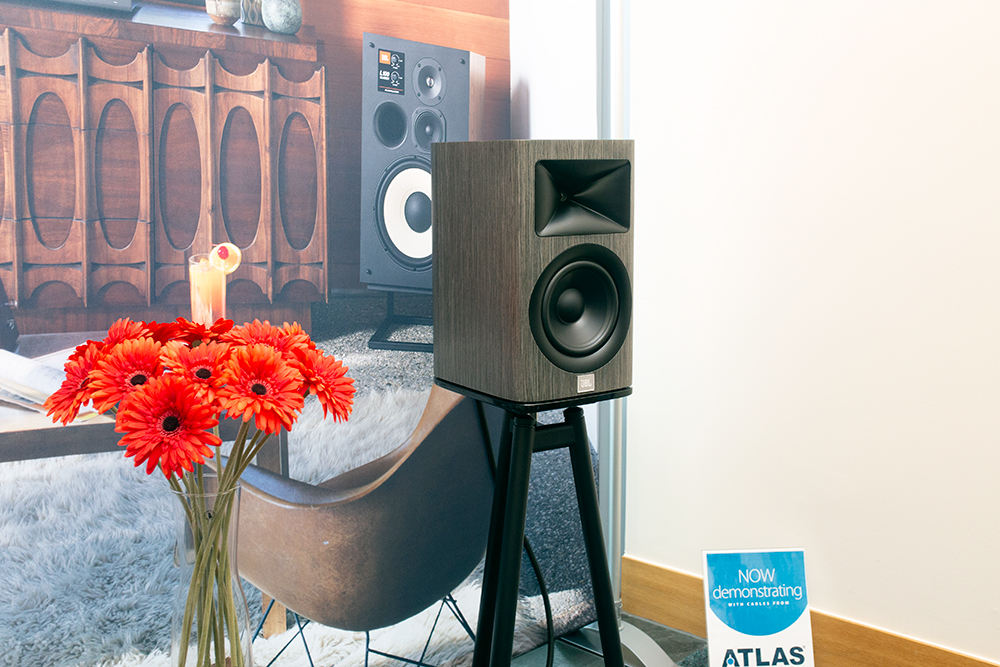 In my coverage of Arcam’s SA30 integrated amplifier in my first electronics report, I wrote: “I nearly shit a brick when I heard it drive a pair of JBL HDI-1600 minimonitors (£1599/pair).” Now it’s time to expand on the HDI-1600, which is part of JBL’s new HDI range. The series also includes the HDI-3600 and HDI-3800 floorstanders, HDI-4500 center-channel, and HDI-1200P subwoofer. All come in high-gloss black or the wood-type veneer shown. At the heart of the HDIs is JBL’s patented 2410-H2 compression-driver tweeter, which is set into a deep waveguide. Complementing the tweeter in the HDI-1600 is a 6.5" midrange-woofer, making it a simple two-way design.

I wasn’t bowled over by the bass depth or high-frequency extension of the HDI-1600s -- they were typical of moderate-sized two-ways playing in an average room. It was the combination of smoothness and transparency that seized my attention. Musical details were there in bold relief, but the music never sounded too etched or in-your-face. If I hadn’t known what components were playing, I would’ve guessed they were two or three times the price.

One of hi-fi’s best-kept secrets is Revel’s Performa3 F206 loudspeaker, which is priced in the US at $3500/pair. I reviewed the F206 on SoundStage! Hi-Fi in November 2014, and I loved what I heard -- neutral across the audioband, ultra-resolving, and as smooth-sounding through the mids as speakers of any price. But the F206 has a weakness -- it can play loud but not LOUD, so it can’t charge up a really large room, even with a super-powerful amplifier. That limitation also means it compresses -- gently, mind you -- on dynamic peaks. You just sense that it can’t go further.

Enter the new F226Be, which has basically the same cabinet as the F206 (shape, size, and I presume construction), but includes greatly improved drivers, including a beryllium dome for the tweeter (the F206’s is magnesium), plus a subtly improved waveguide for the tweeter, a redesigned crossover, and higher-quality finishes. Priced at £6999/pair (quite a bit more than the F206), it’s one of the newest additions to Revel’s PerformaBe series, which already had the M126Be (a similarly hopped-up Performa3 M106) and F228Be (based on the Performa3 F208). Revel has also just added the flagship PerformaBe floorstander, the F328Be (it has no Performa3-series counterpart). While the F226Be looks quite similar to the old F206, what I heard in the large room indicated that this is a much-improved speaker, with greater ability to reveal dynamic contrasts, even at high volume. Even though the F226Be costs much more than the F206, I have a hunch that it too could be a tremendous value.

Incidentally, Arcam, JBL, and Revel all fall under the Harman International brand umbrella, which is now owned by Samsung. Don’t fret that these brands are owned by a Korean juggernaut best known for cellphones and TVs -- they obviously still know how to produce great sound. 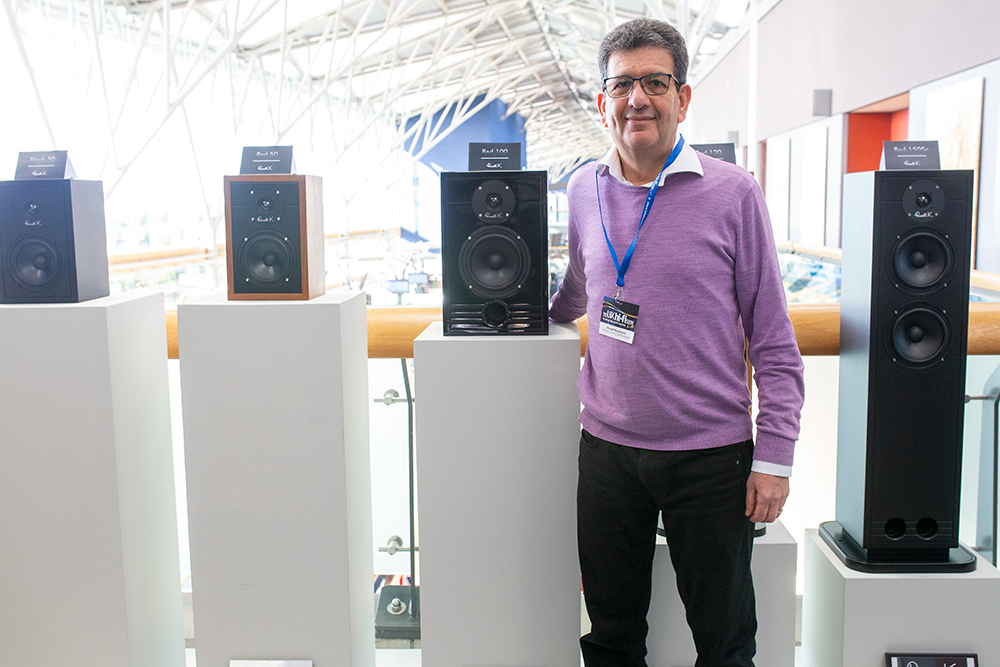 I first met Russell Kauffman when he was designing loudspeakers for Morel, the Israel-based driver manufacturer. For several years, Kauffman has had his own brand of speakers, Russell K., which is based in Britain. His designs tend to be attractive and deceptively simple-looking, with the latest being the Red 150 Se (from £5999/pair, depending on finish), basically a souped-up version of his Red 150 (from £3999/pair).

The Red 150 Se is a 2.5-way design with a 1" soft-dome tweeter, which is different from the one in the standard Red 150, and two 6.5" paper-cone woofers. Because of the new tweeter, the crossover differs from the one in the standard Red 150. In both designs, however, the bottom-most woofer only reproduces frequencies below about 80Hz. The woofer above produces everything below 2.2kHz, where it hands off to the tweeter. As with all Russell K. speakers, the Red 150 Se has no damping inside the enclosure. According to the company’s website: “Damping slows down the sound, making it out of synch with the output of the driver. With the Red series, we’ve removed the damping which allows the cabinet to breathe but in time with the main drive unit ensuring freedom from cabinet distortions.” 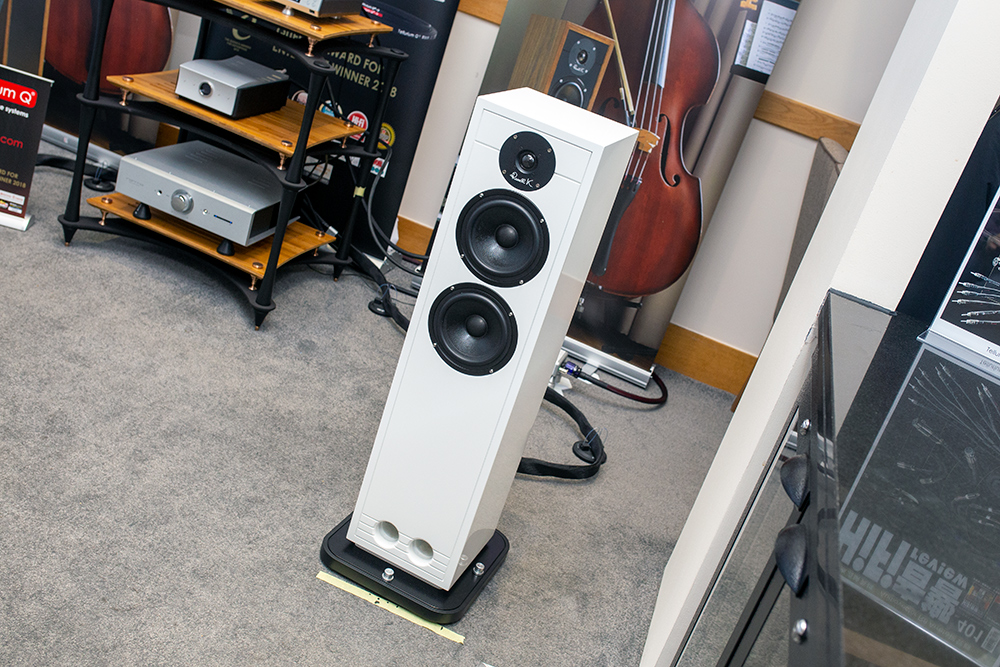 An hour after I visited the Russell K. room, a question came to mind: why is “Red” in the model name? (I looked at the Russell K. website and found all the models have “Red” as part of their names.) On my first visit, Kauffman told me that the 150 Se is available in high-gloss white or black painted finishes, as well as a walnut wood veneer -- but nothing remotely red. That question caused Kauffman to pause for a moment. Then he whipped out his phone and showed me a photo of the first speaker his company produced -- it had a bright-red baffle. Kauffman said he had thought that would make the product stand out, and also help it sell in China, where people like the color red. But customers didn’t take to it, instead demanding more traditional finishes. Obviously, Russell K. kept the color as part of the product names. 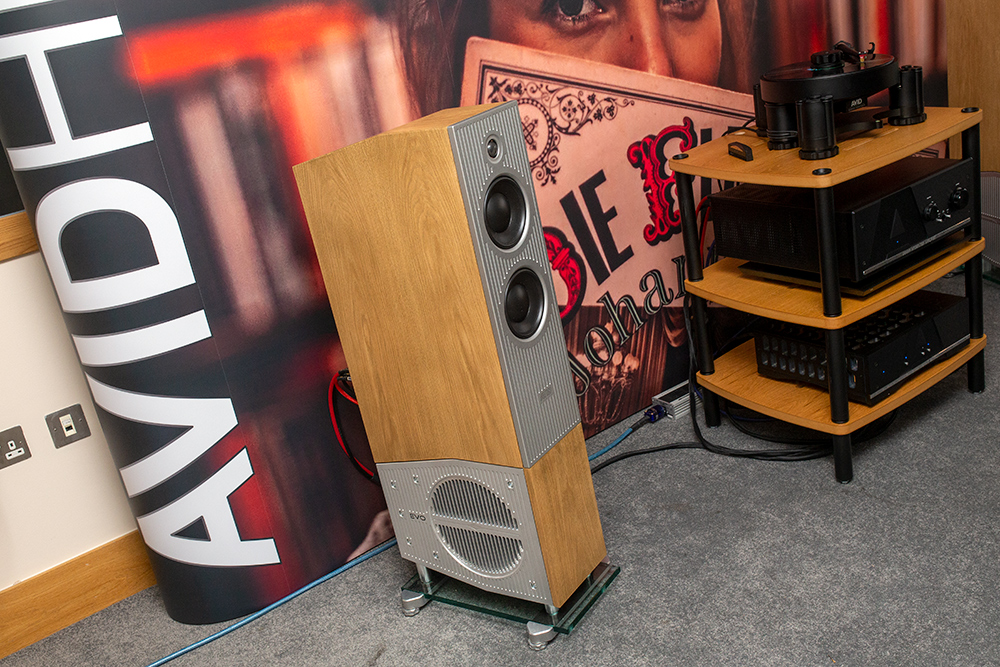 AVID, whose name stands for A Very Interesting Design, and whose integrated amplifiers I covered in the electronics section, showed some forthcoming speakers that will be part of its new Evo series. Carrying four- and five-digit price tags, they’re hardly cheap -- but they’re certainly cheaper than AVID’s Reference-series speakers, which start at £17,000/pair for the stand-mounted Four, and top out at £180,000/pair for the One floorstander.

The Evo Two, shown above, is a three-way design that has a 1" soft-dome tweeter, two 6" midranges, and a side-firing 10" woofer. All the drivers are made by Morel. I really liked the way it blends wood, for most of the cabinet, with aluminum on the front and sides. The Two is expected to sell for £14,000/pair when it becomes available in 2020. There’s also a smaller floorstander coming, the Three, for £8800/pair, along with . . . 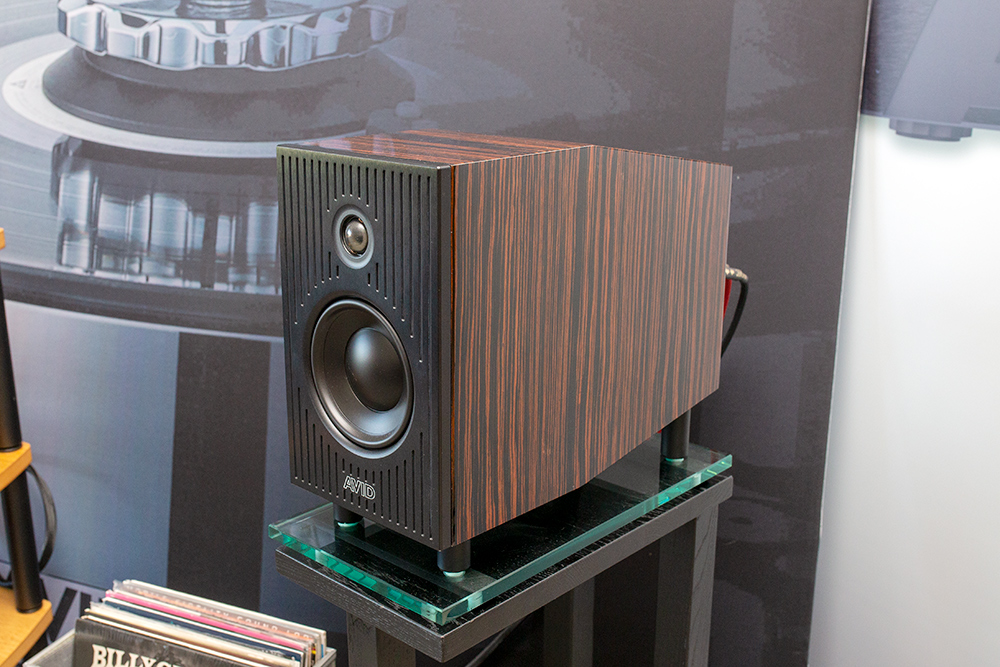 . . . a Four, a stand-mount design, shown above, for £4400/pair. I forgot to ask about a One, but you have to figure that if an Evo One isn’t available when the Two, Three, and Four come out, it won’t be far behind. 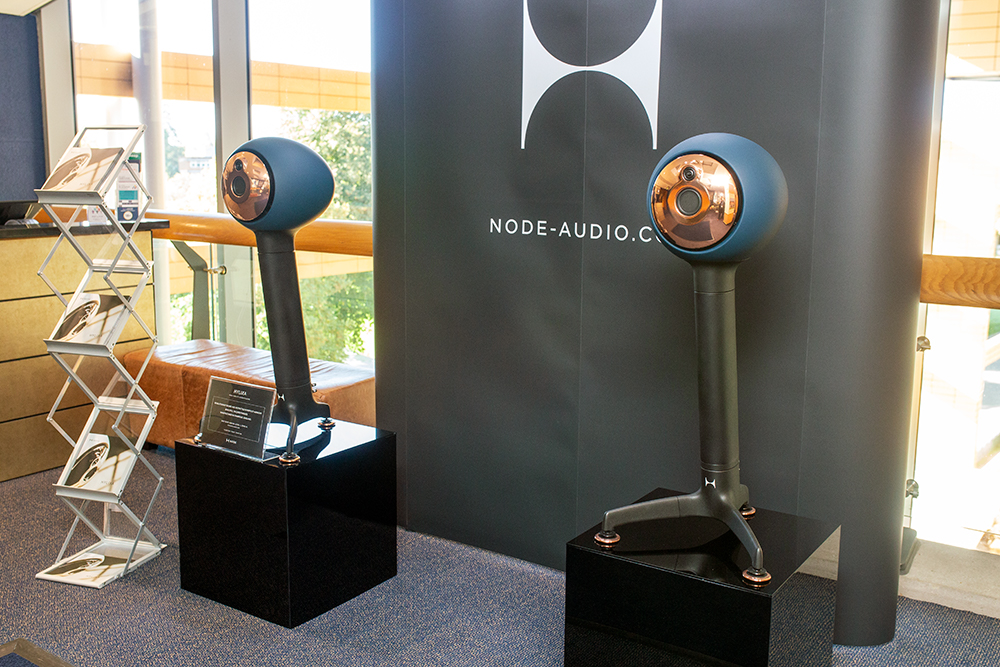 The most ambitious stand-mounted speaker I saw at UK HiFi Show Live was the Hylixa, which comes from Node Audio, a one-year-old hi-fi company based in Cambridge, UK. Priced starting at £30,000/pair, depending on finish, with the integral stand, the Hylixa has a cabinet made from laser-sintered glass and nylon particles. Laser sintering, I was told, is like super-advanced 3D printing.

The Hylixa’s metal front baffle has what looked like a 0.75" ring-radiator-type tweeter over top of a Balanced Mode Radiator-type driver about 2.5" across. What you can’t see is a woofer mounted behind the front two drivers but facing the opposite direction. The Hylixa is a three-way design. The woofer fires into the rear of the cabinet, and its soundwaves are said to travel through a 1.6m-long Helical Transmission Line. The result, Node Audio claims, is “remarkable bass extension and articulation relative to its compact form.” 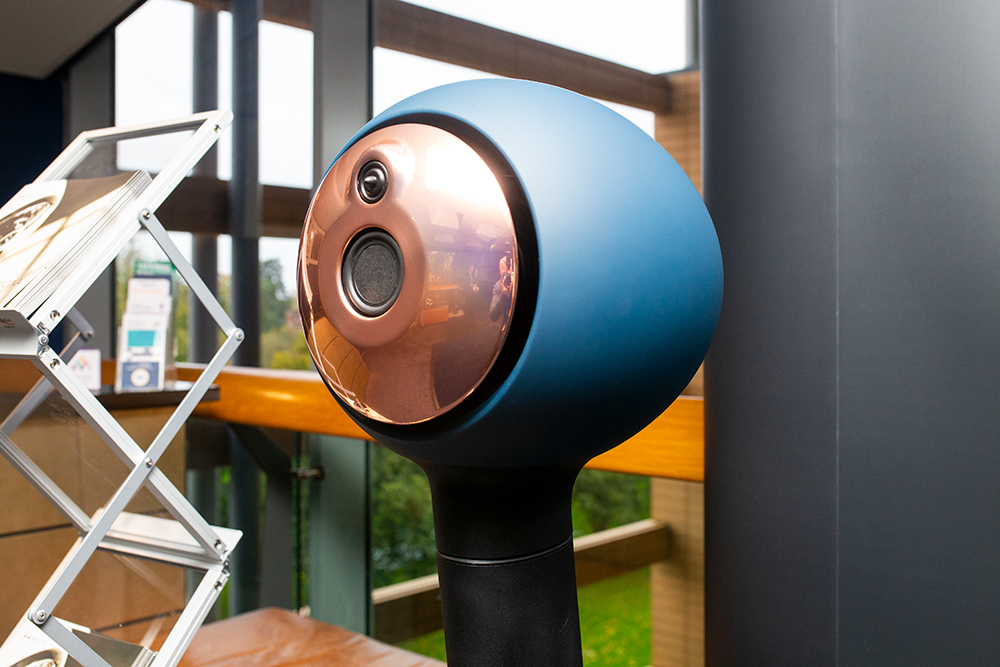 Intrigued by the Hylixa, when I got back to the hotel I downloaded the specification sheet from the company’s website. I was pleasantly surprised to see a chart that shows its frequency response above 400Hz, not only on-axis, but 15, 30, and 45 degrees off-axis as well. The spec sheet says anechoic bass response is claimed to be 56Hz, while in-room response is said to be 39Hz. What jumped out at me, though, was the sensitivity, which is said to be a low-ish 82.4dB (2.83V/m) -- you’ll need a beefy amplifier to drive a pair of Hylixas. However, Node Audio claims a maximum output of 103dB, so if you can provide enough power, the Hylixas should fill a fairly large room. I left wanting to learn more about this speaker. 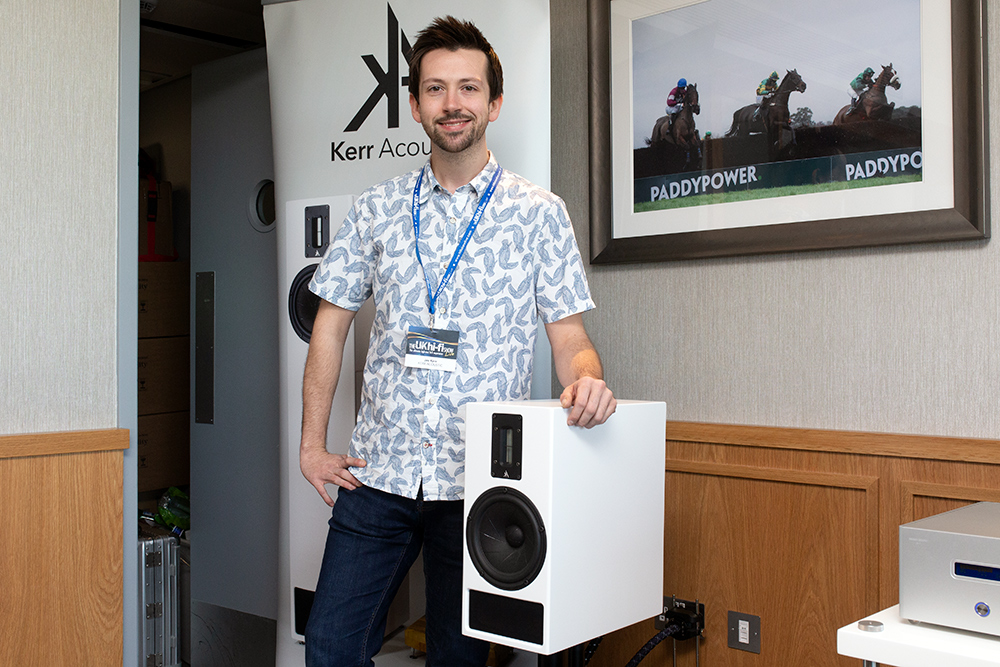 I love going to shows in different places because you discover new companies that you likely wouldn’t otherwise see. Jes Kerr started his company, Kerr Acoustic, three years ago and currently has three loudspeakers to offer: the large, three-way K100 floorstander, priced from £13,995/pair, depending on finish; the smaller, two-way K320 Mk.II floorstander, from £4295/pair; and what’s shown in the picture, the two-way K300 Mk.II bookshelf, from £3495/pair. The K300 Mk.II has a 2" ribbon tweeter working in conjunction with a 6.5" woofer with a wood-fiber cone. Like all Kerr speakers, the K300 Mk.II has a transmission line built into the enclosure to increase bass output. Specifications include a claimed frequency response of 33Hz to 45kHz, sensitivity of 89dB (2.83V/m), and impedance of 6 ohms.