I spent my final few hours at the UK Hi-Fi Show Live 2019 hunting for products I know many people enjoy -- cables and accessories. I can’t blame them -- once you’ve bought the speakers, amplification, and source components you really want, you probably want to try some tweaks to see if your components can be made to sound even better. All products are shown in the order I saw them, with prices in British pounds. 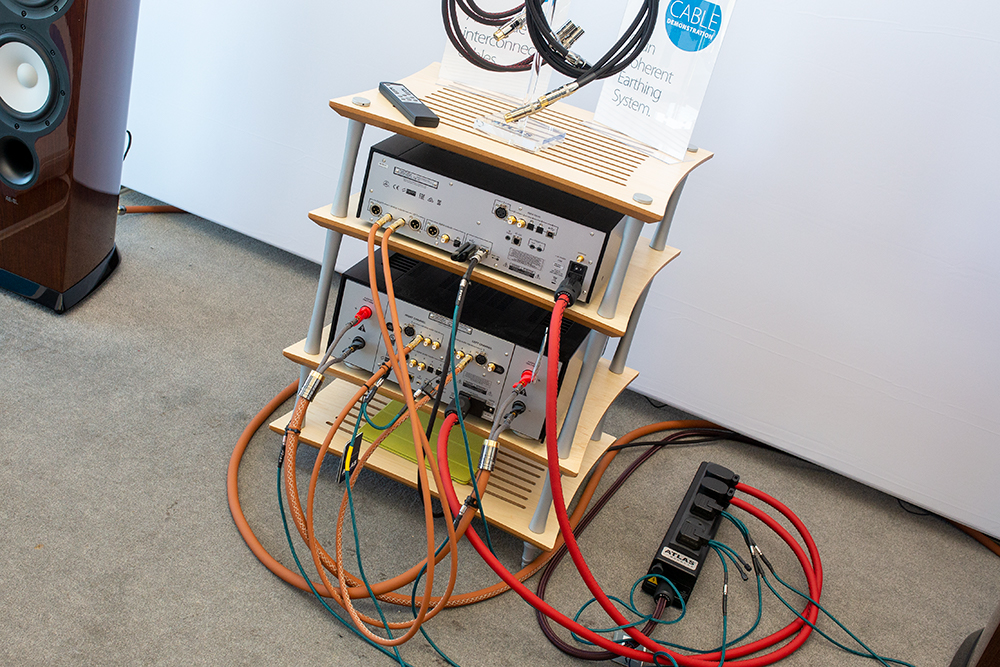 Before I get to Atlas’s cables, let me show you a clever demo technique: Atlas turns its equipment rack around during cable demos. I’ve never seen any other company do this. Atlas said this makes it easier to access cables and swap them in and out for demonstrations. I wondered aloud, “Why hasn’t anyone thought of this before? Why not show the cables instead of hiding them behind the components?” Someone there then called this another example of Scottish ingenuity (Atlas is located 20 miles southwest of Glasgow). I bet I’ll see other cable manufacturers following suit at the next audio show I attend. 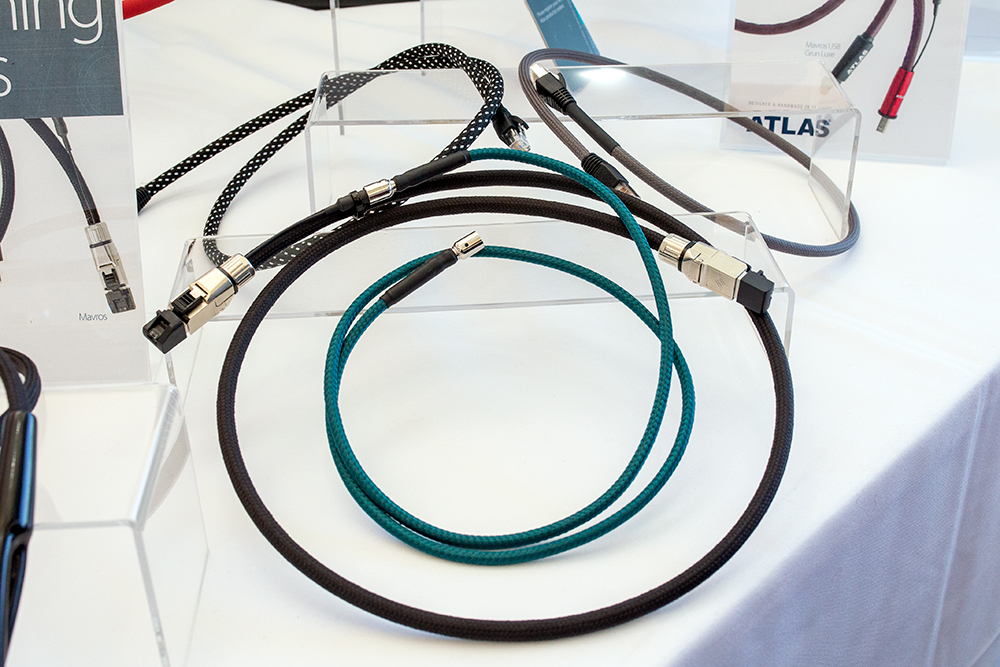 The folks at Atlas first showed me the company’s new audiophile-grade Ethernet cables. At top right in the photo is the Equator, priced at £85 for a 1m run. Top left is the Hyper, which costs £165 for 1m. At bottom is the Mavros, which, at £495 for 1m, is by far the company’s most expensive; however, the Mavros comes with an additional grounding wire (the thin turquoise one that attaches to the main cable) in order to further reduce noise -- I was told the wire can be terminated on any grounding post in the system. 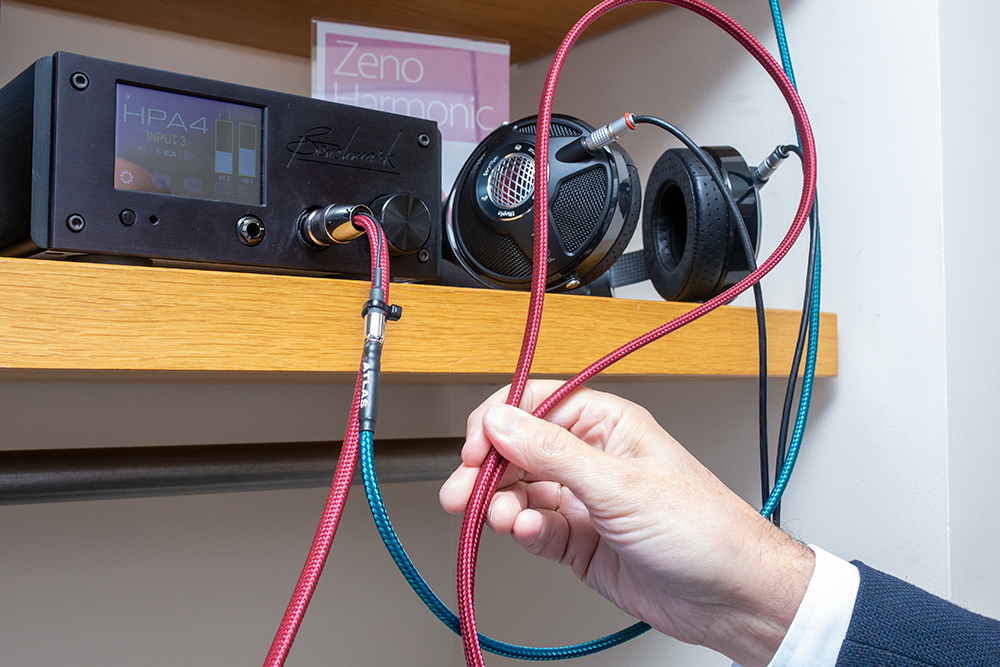 Atlas also had a new headphone cable, dubbed Zeno Harmonic, which also comes with a supplemental grounding wire. The price of the Zeno Harmonic is £835 for a 3m length, terminated with a 4-pin XLR connector. 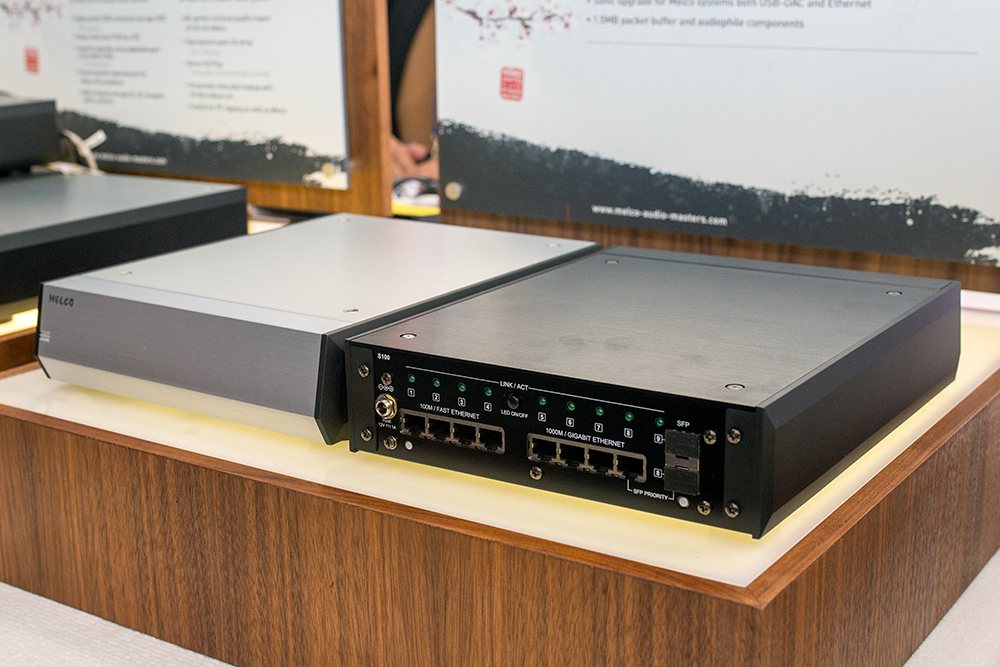 Want some fancy hardware for those fancy Ethernet cables? The UK Hi-Fi Show Live 2019 saw the launch of Melco’s S100 audiophile-grade data switch, which sells for £2000 and is available in black or silver. The S100 has four 100Mb ports, which Melco says are “best for audio quality.” It also has four 1GB ports -- Melco says these “are ideal for PC connectivity, and are ideal for the Roon Core processor which generates high traffic flow.” There are also two SFP ports, which are said to be compatible with Lumin’s streaming products. The S100 also has a 1.5MB internal buffer “to deal with erratic external connectivity.” I have yet to try one of these audiophile-type switches -- I find it hard to believe it can make that much of a difference -- but I’m thinking I might really have to try one to know for sure. 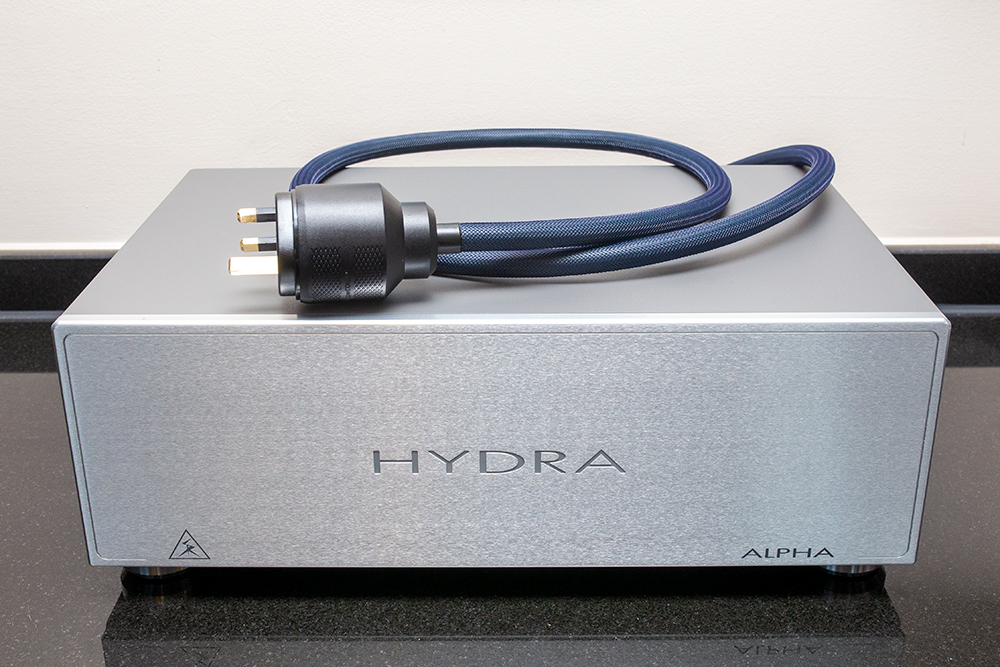 After shifting products around in Shunyata Research’s room, I managed to capture two of the company’s new products in one photo. On the bottom is the Hydra Alpha A10 power conditioner (£3900), which offers “six zones of isolation” and ten high-current 13A connectors. The A10 features Shunyata Research’s signature technologies, including Dynamic Transient Current Delivery, Component-to-Component Interference, Noise Isolation Chamber, and Kinetic Phase Inversion Process, among others. I also learned that there is an equivalent US version called the A12, which has (you guessed it) 12 connectors. The A10 has only ten, simply because UK sockets are bigger. 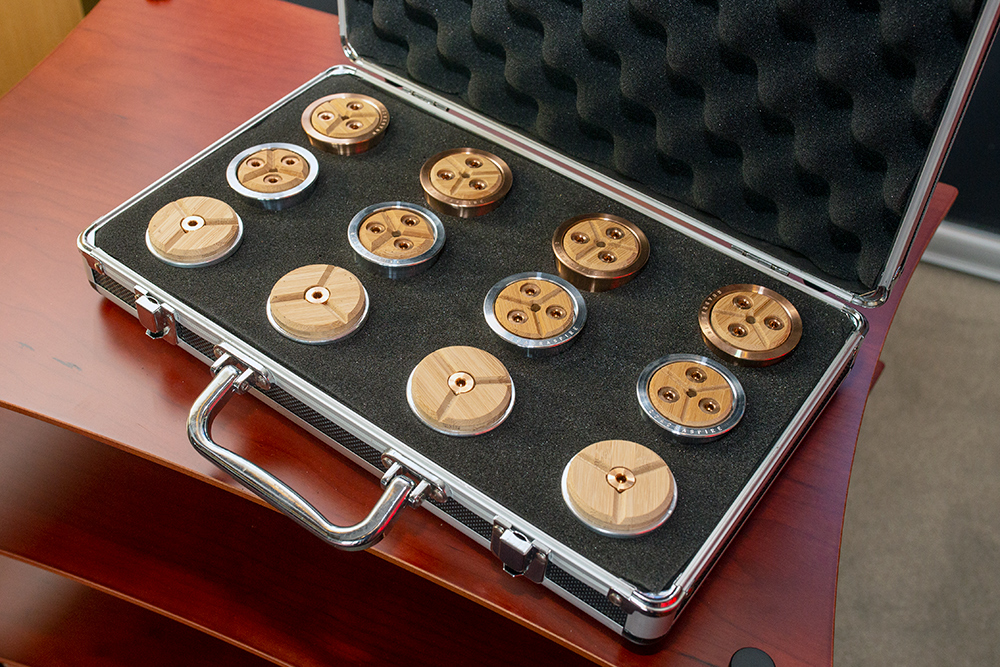 UK-based Quadraspire has been around since 1995, but I’d never heard of it before this show. Now that I have, it’s a company I’m likely to follow because of its racks, along with the products shown above, Quadraspire’s Qplus-series footers. I mistakenly called them “isolators,” but was quickly told that they don’t isolate anything; instead, they transfer energy from components in a controlled manner. The bottom group of four in the case are the entry-level Qplus Evo footers, which sell for £120 for all four. Next up, the Qplus Advanced footers, which cost £300 for four. On top are the Qplus Reference footers -- £900 for the four. As for what the case of Qplus footers is resting on, that’s . . . 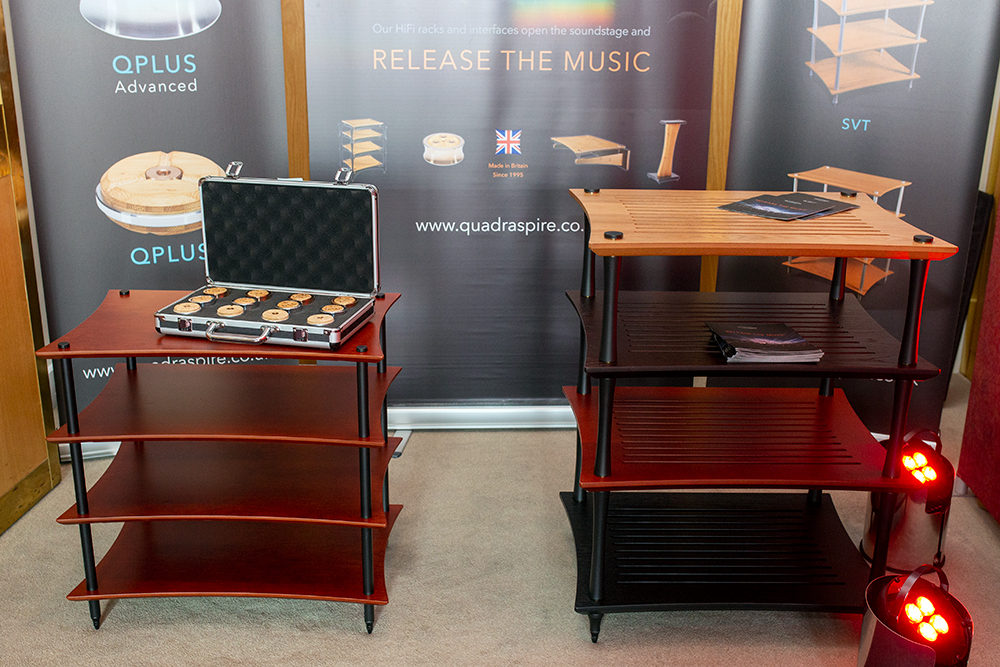 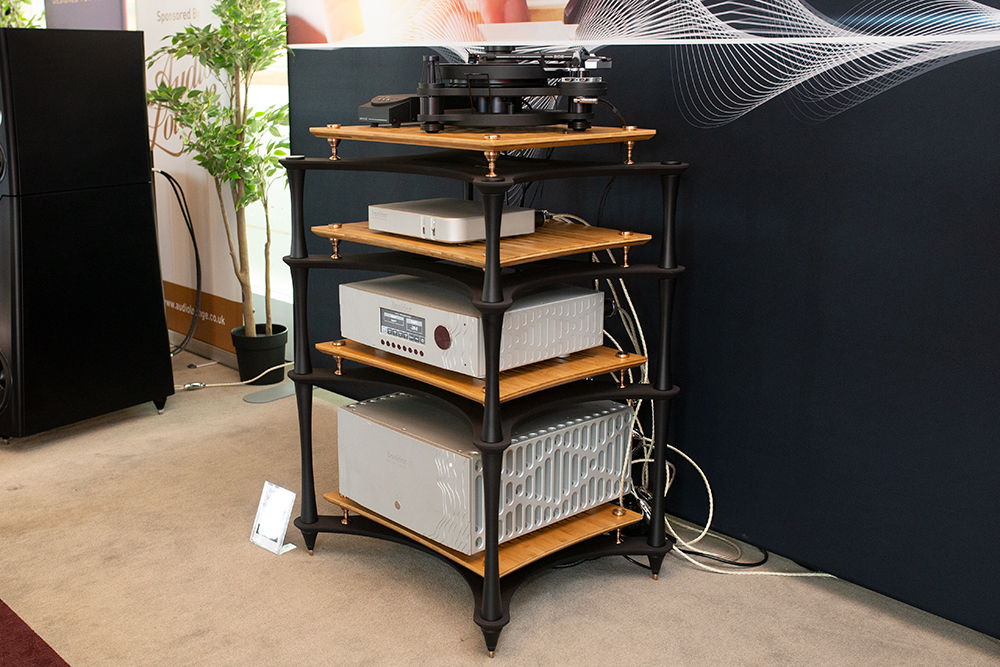 X Reference rack, which is shown supporting an SME turntable and Boulder Amplifiers electronics. The X Reference sells for £1100 per tier. The X Reference wouldn’t fit my needs right now, but that Q4 Evo could be an interesting addition to my System One setup, which I write about on SoundStage! Hi-Fi.