Gloomy, rainy, shitty. That, to me, sums up the weather in Ascot, England, on October 26 -- maybe all of England, for all I know. On the brighter side, Paul Miller, who presides over the annual UK Hi-Fi Show Live, and is also the editor of Hi-Fi News and Record Review, has taken his event out of the hotel where it’s been held until now, and moved it to the Ascot Racecourse -- a seriously attractive, upscale venue that’s home to thoroughbred horseracing. 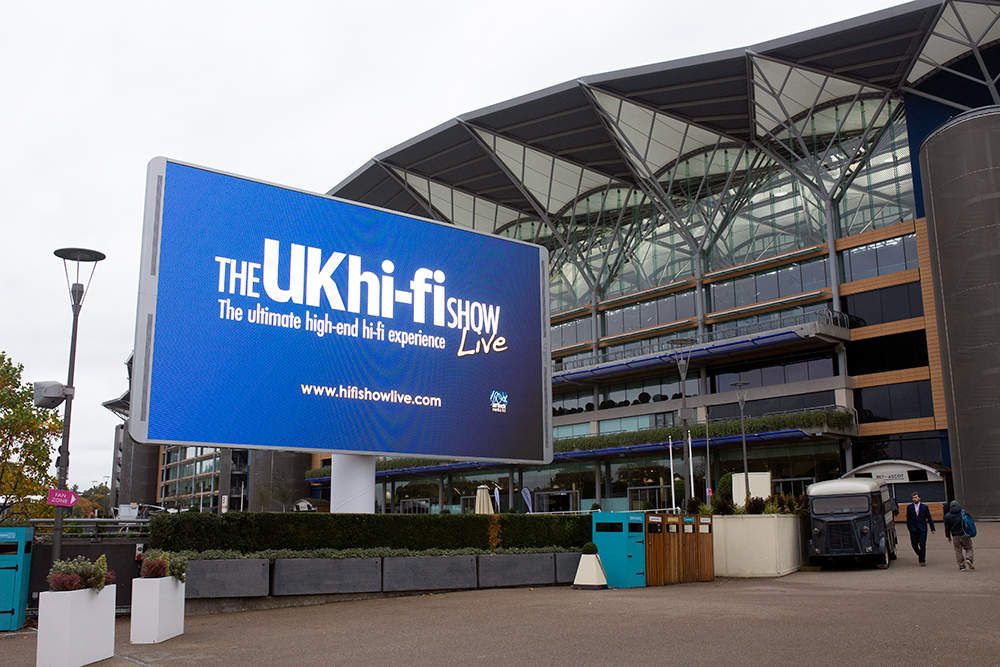 Taking a cue from Warsaw’s ultra-successful Audio Video Show, for which the Warsaw National Stadium now serves as a primary venue, Miller rented Ascot’s private box suites for use as hi-fi showrooms. It’s a smart move. To me, hotel-based hi-fi shows are generally second- or third-rate events, because of the setting -- crowded hallways and rooms that typically contain much of their everyday furniture. With the move to Ascot, I think UK Hi-Fi Show Live has taken a serious step upward -- and many exhibitors voiced the same opinion. Attendees noticed the upgrade as well. When I arrived, there was a long line of people waiting to get in. 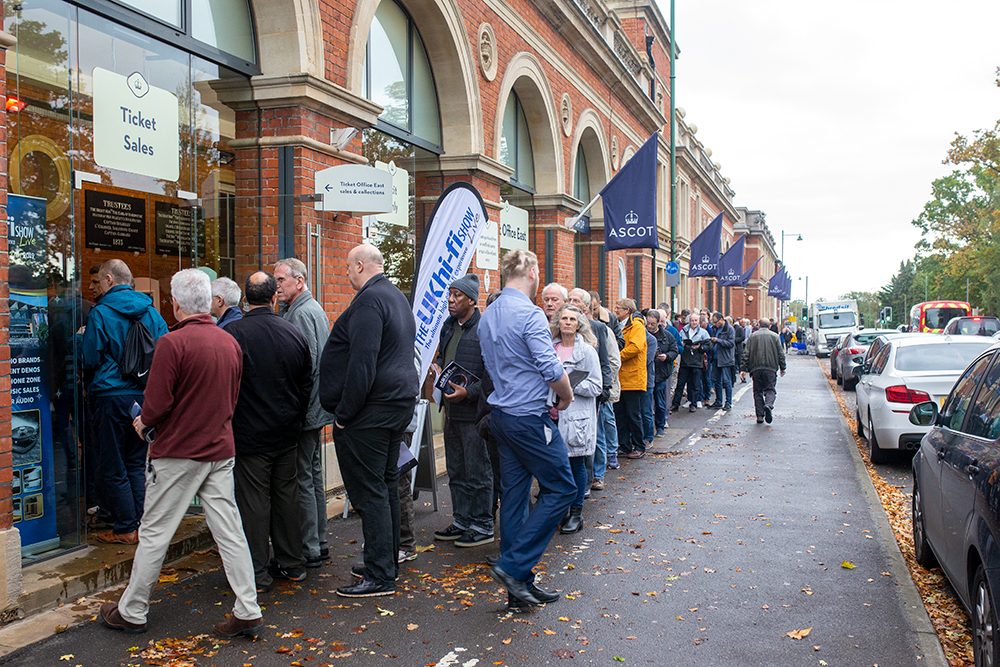 In all, over 200 brands were represented in about 40 rooms. This first article showcases the new and/or interesting hi-fi electronics I saw on the 26th. All prices are in British pounds (£).

Heinz Lichtenegger, who’s best known as the owner of Pro-Ject Audio Systems, is now the owner of Musical Fidelity, which was founded in the UK in 1982 by Antony Michaelson. Lichtenegger told me he initially toyed with the idea of using his own designers and manufacturing capabilities to make new Musical Fidelity products. But he was so impressed with what Musical Fidelity had in place that he’s maintained the company’s current UK designers and the Taiwan outfit that manufactures the stuff, calling that overseas factory “one of the most professional I’ve ever dealt with.” 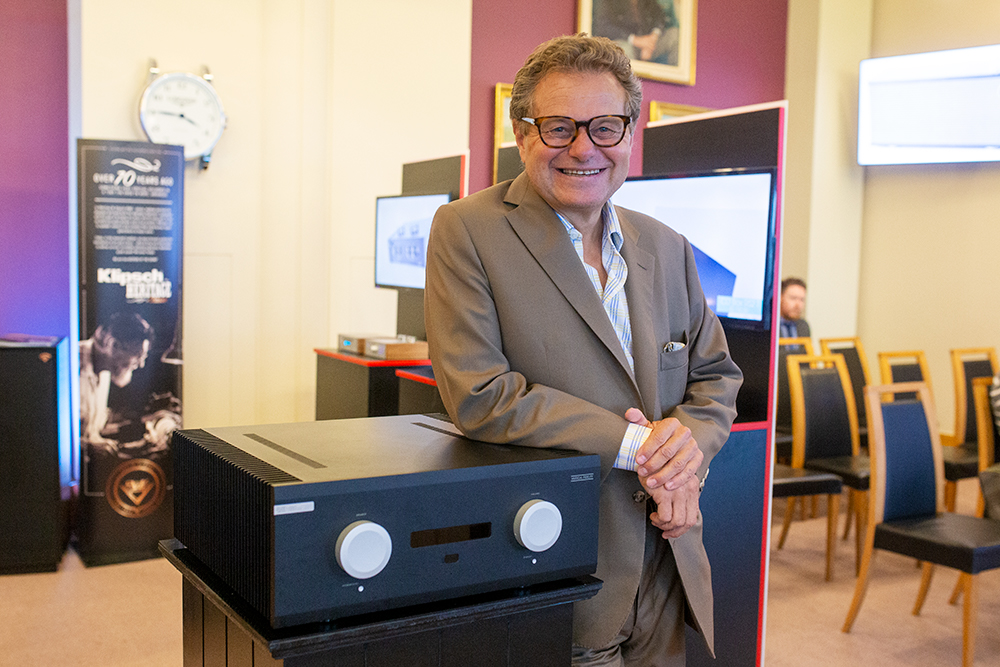 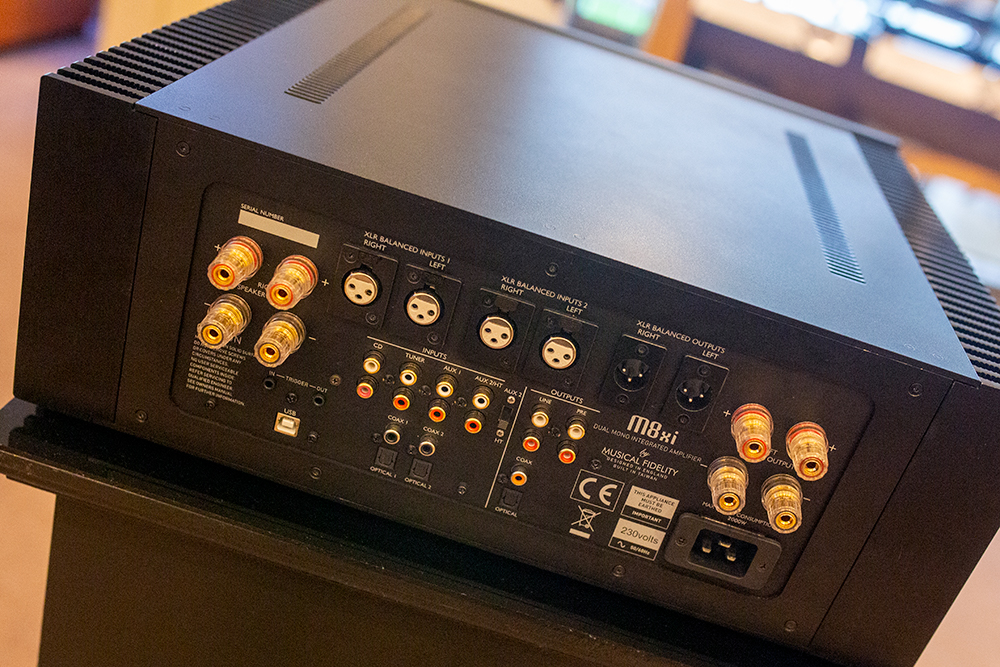 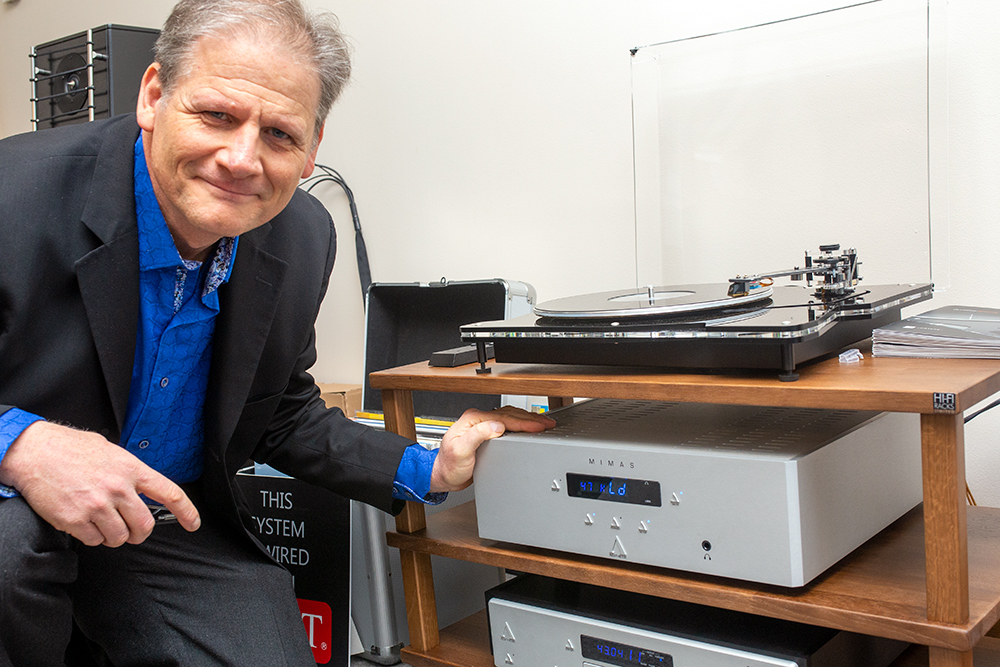 Jim White, founder of Aesthetix, which is based in Moorpark, California, USA, was pretty excited to show me his Mimas integrated amplifier, priced at £8725. The Mimas is called a “hybrid” because it marries two 6DJ8 (6922) tubes (one per channel) with a solid-state output stage rated for 150Wpc into 8 ohms or 280Wpc into 4 ohms. The Mimas isn’t exactly new -- White said it became available last year. But I gathered the optional phono-stage card is new, and this increases the price by £1200 (there is another slot for the digital card, also priced at £1200). Supporting moving-magnet and moving-coil cartridges, the phono card has two sets of inputs, so you can connect two turntables simultaneously. Gain is adjustable from 44 to 72dB in 4dB increments; input-impedance loading has 16 settings, ranging from 50 to 47k ohms; and input-capacitance loading has four settings, ranging from 100 to 470pF. 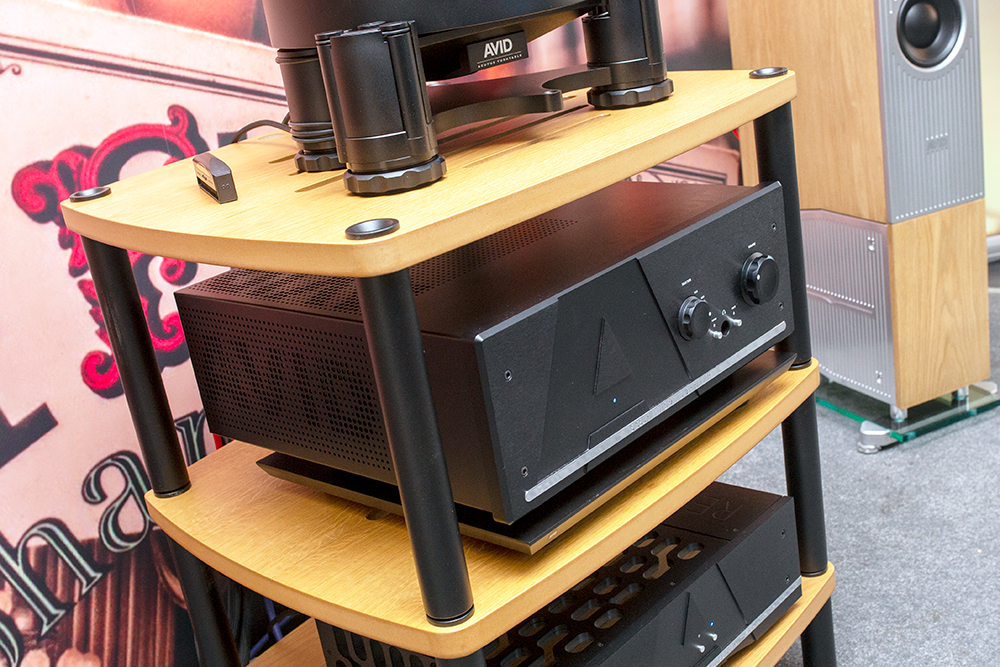 I learned something new today -- the company name of Huntingdon, UK-based AVID, which was established in 1995, stands for "A Very Interesting Design." Not exactly new (I saw mentions of it in 2018), but never covered by us and definitely interesting, was the Sigsum integrated amplifier, priced at £13,000. The product’s name, as AVID defines it, means “the sum of two signals.”

Proudly proclaimed as an “all analog” design, and rated to output 110Wpc into 8 ohms, the Sigsum has four pairs of balanced XLR and four pairs of single-ended RCA inputs, two pairs of single-ended RCA outputs, and a 1/4" headphone-jack output. Like the Mimas’s phono card, it also has two sets of phono inputs, with its onboard phono stage offering adjustments of 48, 60, or 70dB for gain; 100, 300, 500, 1k, 5k, or 10k ohms for input impedance; and 100, 200, or 500pF for input capacitance. Last but not least, AVID will soon release a new, lower-priced, lower-powered integrated amplifier called Integra, priced at £7000 and rated to deliver 90Wpc into 8 ohms. 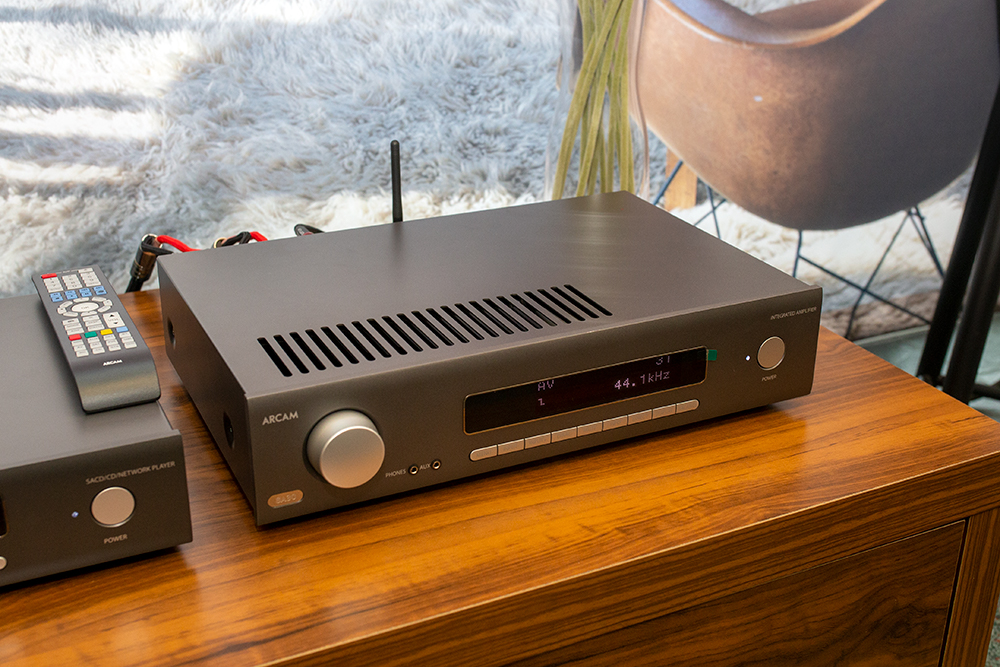 Arcam’s HDA SA30 streaming integrated amplifier-DAC isn’t brand new -- it debuted at Munich’s High End, which was held in May -- but I feel compelled to mention it because I nearly shit a brick when I heard it driving a pair of JBL HDI-1600 minimonitors (£1599/pair) in one of the smaller box suites. The sound was unbelievably smooth, but at the same time extraordinarily transparent. Priced at £1999 and rated to output 120Wpc, the SA30 furthers Arcam’s work with class-G-type power amplification, which the company has been using for about ten years. The SA30’s features include five sets of analog inputs (one is for the onboard, switchable moving-magnet/moving-coil phono stage), four S/PDIF digital inputs (two TosLink, two RCA coaxial), and Dirac Live room correction (I was told that Dirac Live wasn’t in use for the demo I heard). I can’t wait to read what our own Roger Kanno thinks of the SA30 -- he’s scheduled to get one for review. 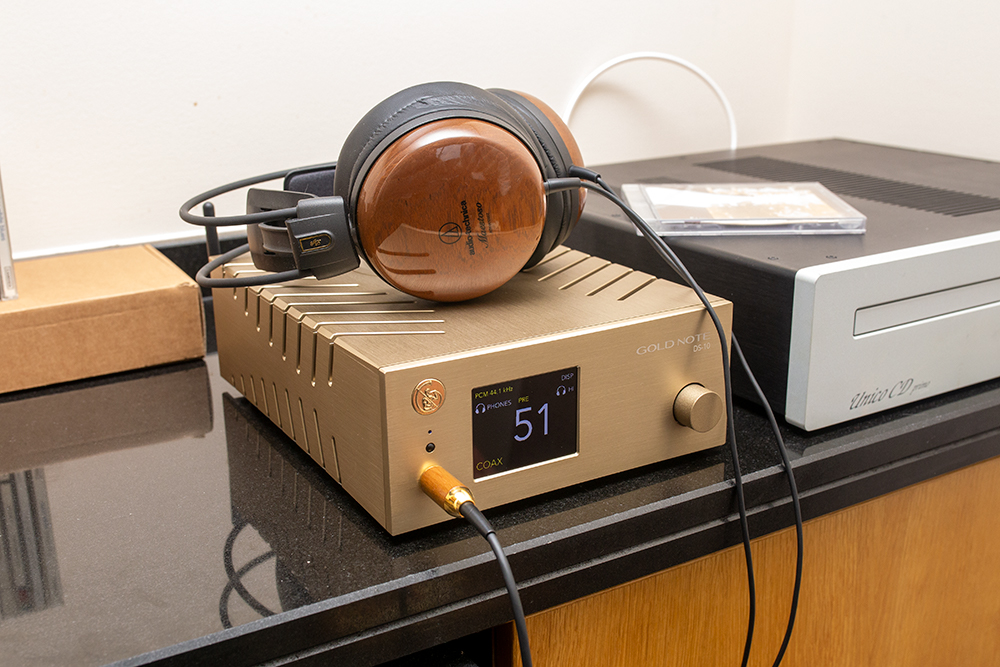 Italy’s Gold Note was on display through its UK distributor, Audio Pinnacle. Of note was the DS-10, a digital-to-analog converter (DAC), streamer, preamplifier (balanced and single-ended outputs), and headphone amplifier (1/4" output). It was shown as a prototype earlier this year at Munich’s High End, but has just started shipping and, according to a rep from Audio Pinnacle, “should be £2700.” According to Gold Note’s website, the DS-10 is Bluetooth 5.0 and Apple AirPlay compatible, is Roon Ready, and has support for Tidal, Qobuz, Spotify, Amazon Prime, Deezer, and V-Tuner streaming services. The DS-10’s digital section is based on an AKM AK4493 DAC chip, with up to 24-bit/192kHz PCM supported through its Ethernet (one), RCA coaxial (one), TosLink (two), XLR AES/EBU (one), and USB (two) inputs. Of its two USB inputs (both are on the back), one is Type-A, for connecting an external drive, the other Type-B, for computer hookup. In addition to 24/192 PCM, the Type-A port supports DSD64, while the Type-B port supports quad-rate DSD (DSD512) and PCM up to 32/384. 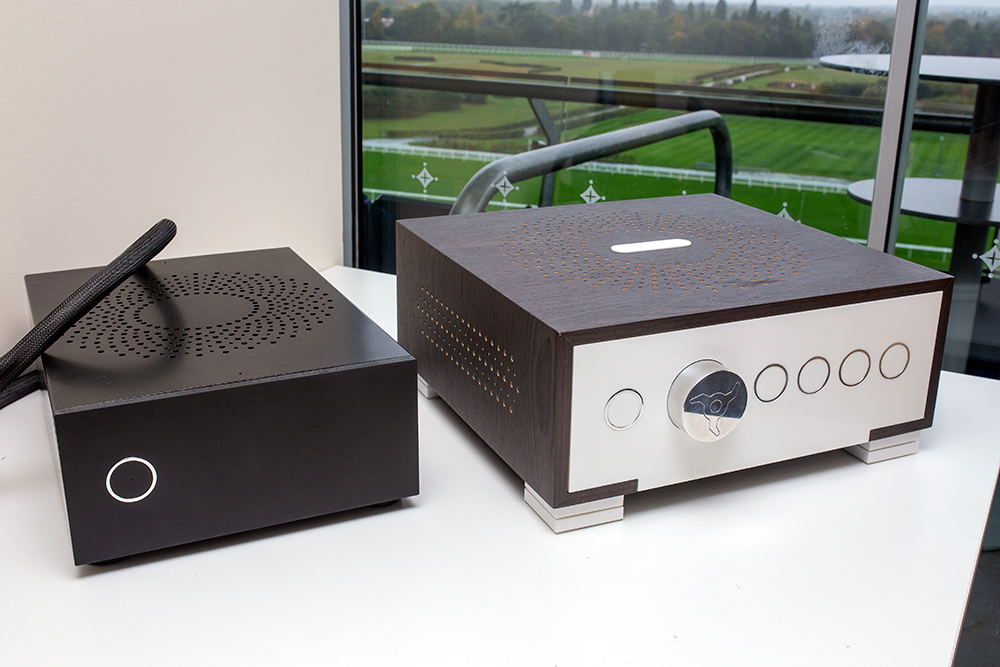 Audio Pinnacle also had on display a prototype of the Fysis 50Ti integrated amplifier, from Trinaudio, another Italian brand. According to the AP rep, Trinaudio has never been sold outside of Italy, but apparently that will now change. I don’t know if that claim about not selling elsewhere is 100% true, but I can tell you that it was hard to find any information about this amplifier -- there was no price (not even projected), and the spec sheet contained hardly any detail. Even an Internet search revealed little. Still, I thought it worth covering because it looks really cool with its wood case (I suspect there must be metal underneath), and also because the distributor told me the folks at Trinaudio rushed it over from Italy just so it could be shown in Ascot, even though it wasn’t actually hooked to any system. All I can tell you is the Fysis 50Ti has an external power supply, is rated to output 50Wpc into 8 ohms, and, like the Mimas, is a hybrid design -- tubed input, solid-state output. If you know more about it, drop me a line.

Next up I’ll have loudspeakers -- there were some interesting ones!