Every Rocky Mountain Audio Fest is packed with cool new speakers ranging in price from hundreds of dollars to hundreds of thousands of dollars. Most of them are conventional passive speakers, so that's what I've focused on here. Occasionally a manufacturer or two works up the nerve to break with tradition and build amps (and maybe even digital signal processing) into the boxes. But by and large, audio enthusiasts still prefer to mix 'n' match their amps and speakers. 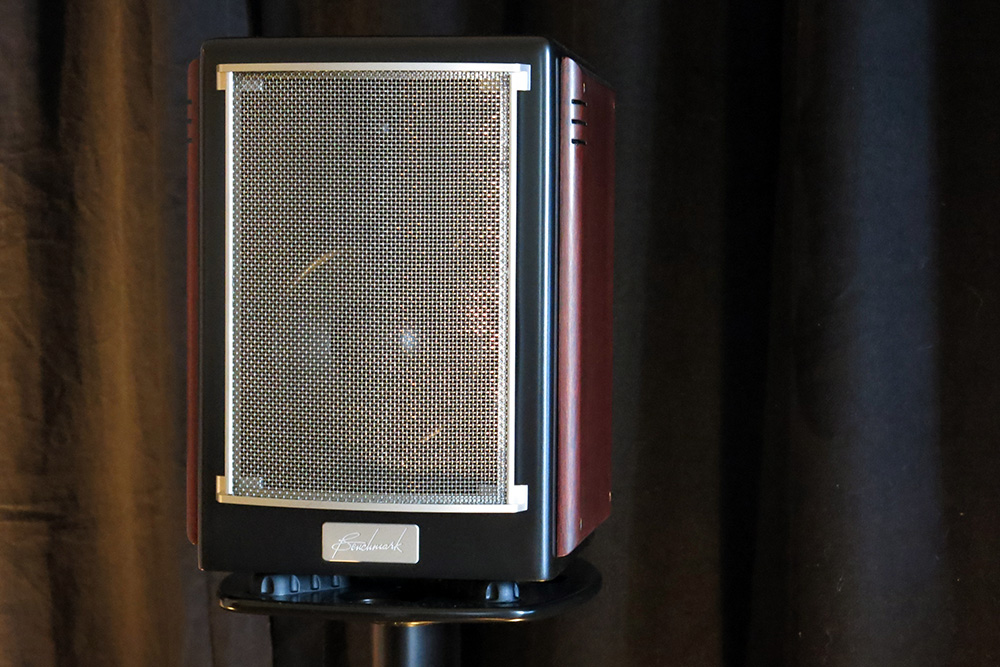 Benchmark is known for digital-to-analog converters (DACs), but it's recently been expanding into other products, including the first amplifier to use THX's new high-efficiency, all-analog technology, and the new $2995/pair SMS 1 minispeaker. The SMS 1 is a rebranded and somewhat improved version of the Studio Electric SE Monitor. As designer David Macpherson, owner of Studio Electric, told me, Benchmark's engineers were able to refine the circuit-board layout and acquire parts with tighter tolerances. I thought the SMS 1 pulled off the tough trick of sounding neutral yet very detailed and spacious. 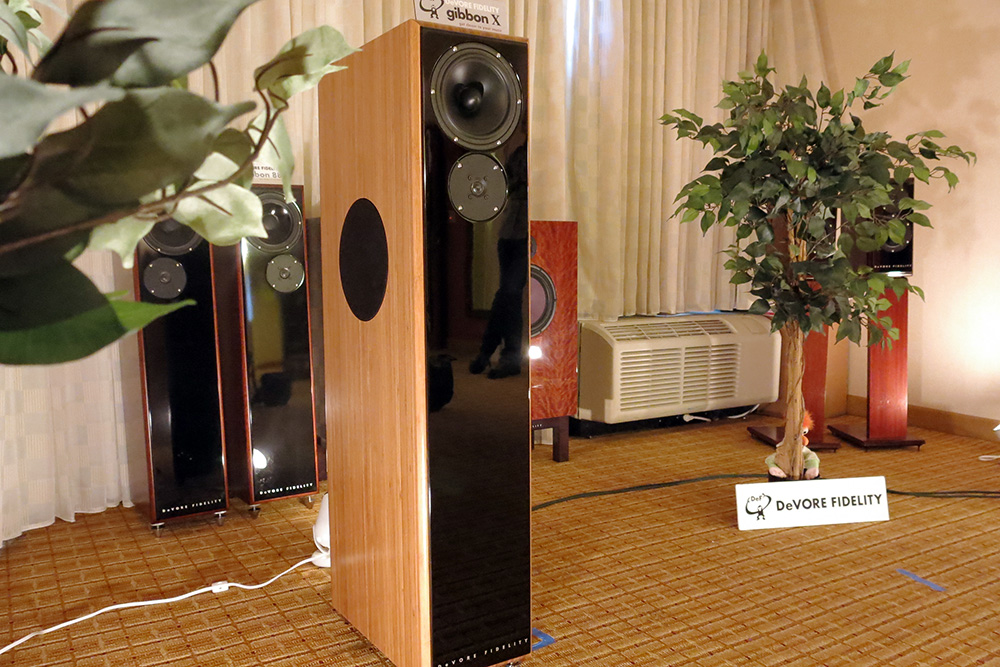 The DeVore Fidelity room is always one of my favorites. The sound is great, and company founder John DeVore plays vinyl records almost exclusively and focuses on obscure but fascinating recordings. On demo was the new $15,500/pair Gibbon X, which features dual side-firing 8" woofers, a 6.5" midrange, and a 0.75" tweeter, driven by an Ayre Acoustics AX-5 integrated amp. The sound, as usual with DeVore's creations, was ultra-detailed and involving, with a very deep soundstage. 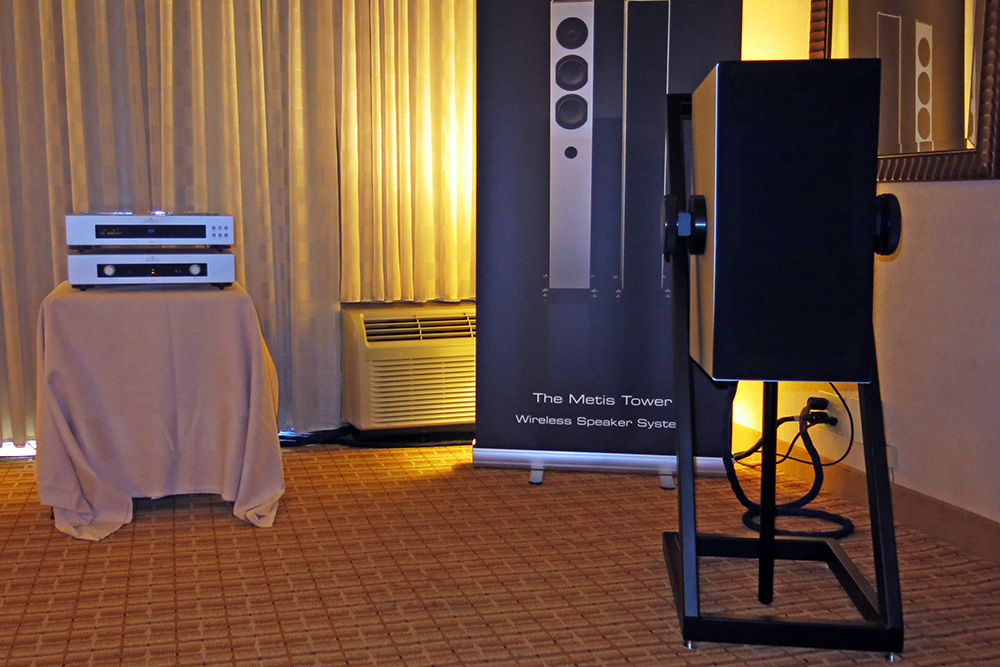 Swiss manufacturer Goldmund showed what might have been the most advanced new speaker at RMAF: the $40,000/pair ProLogos Plus. The ProLogos Plus has three built-in amps, one each for the woofer, midrange, and tweeter, and it uses digital signal processing to correct the speaker's phase response and frequency response, and to correct for room acoustics problems too. A receiver for uncompressed wireless audio is built in, and you can also use a wired digital connection. Get sound to the ProLogos Plus from an included USB computer dongle or from Goldmund's wireless Hub -- a wireless transmitter with analog and digital inputs. 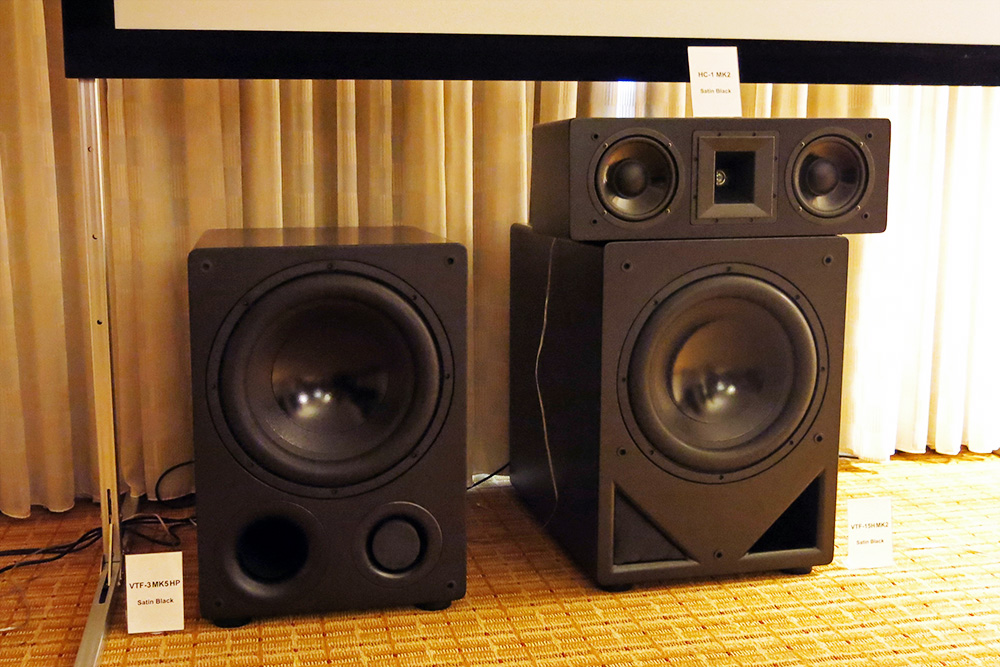 Subwoofer specialist Hsu Research launched two new subs at RMAF 2014, the $799 VTF-3MK5HP (shown left) and the $899 VTF-15HMK2. (Prices are for flat black finish.) Both models get a substantial upgrade from 350W RMS class-AB amps to 600W amps, and 15" drivers with magnets double the size of the previous models. The VTF-15HMK2 also adds an XLR balanced input. According to Dr. Poh Hsu, the company founder, both subs' outputs are improved by about +4dB in the midbass (40 to 80Hz) and +2dB in the low bass (20 to 40Hz). 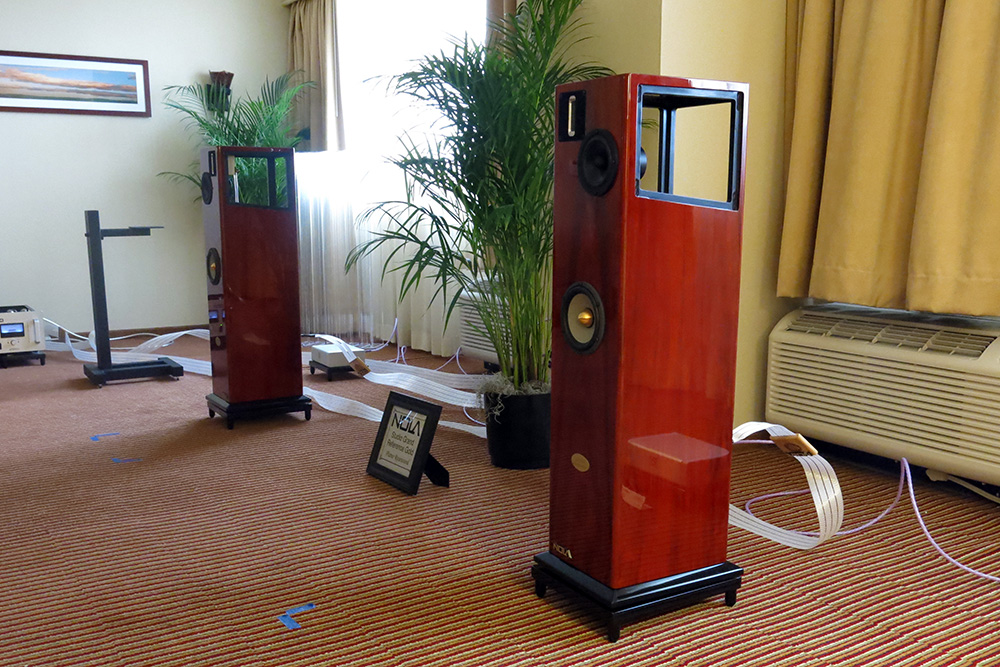 Nola speaker designer Carl Marchisotto has built his career around designing speakers with midrange and tweeter drivers that use no enclosure. Thus, they don't have the sonic colorations that enclosures add, and because they emit sound forward and backward, they create a more spacious soundstage. This is the new Studio Grand Reference Gold, a smaller tower speaker for the Reference Gold line. They're pricey at $19,800/pair, but the room was packed and the soundstage seemed just as enveloping as with the bigger Nolas I've heard. 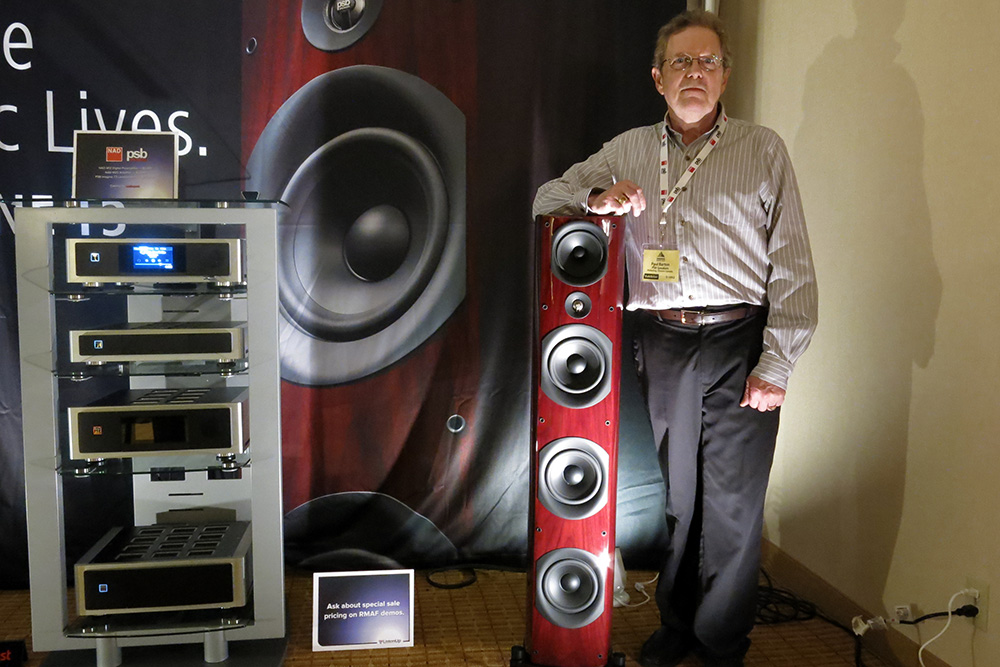 The Imagine T3 is PSB's new top-of-the-line model, coming in at $7498/pair. According to chief engineer Paul Barton, it's a couple of dB more sensitive (an impressive 91dB) than the previous top model, the Synchrony One, and it's down -8dB at 20Hz compared to -10dB at 24Hz for the Synchrony. Like many other PSB towers, the Imagine T3 is a transitional design, with each woofer crossed over separately. The top woofer works from 500Hz on down, the middle one from 250Hz down, and the bottom one only at 100Hz and below. With three sets of binding posts, you can drive the bottom woofer separately, so you can run it on a separate amp and adjust its level independently. Or you can short it out so it works as a bass absorber, something that might come in handy in a room with lots of low-frequency gain. 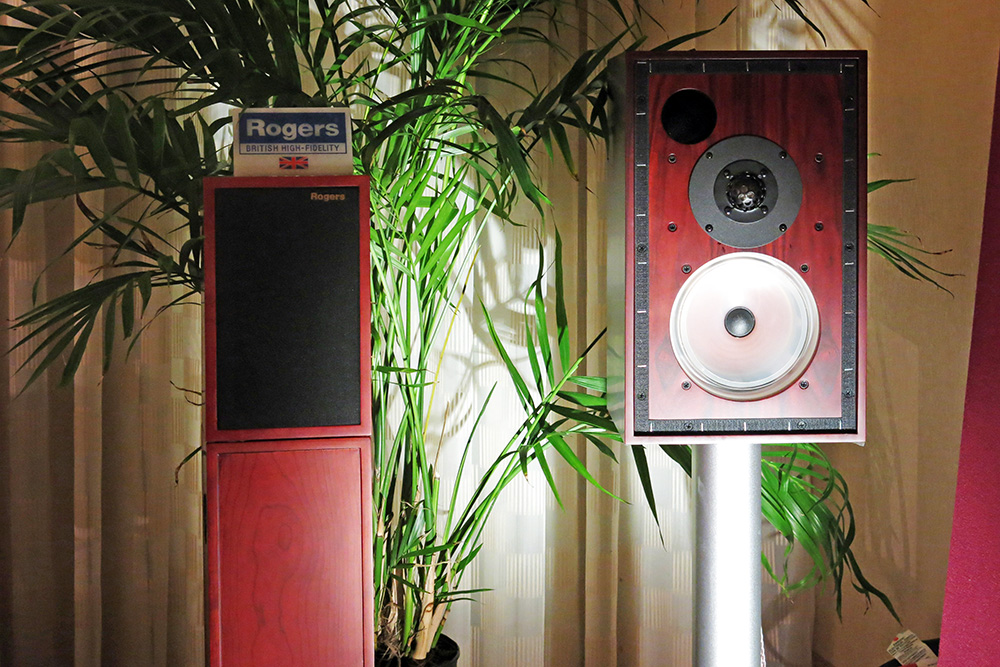 The Rogers brand is revered for the legendary LS3/5a recording monitor, one of the first minispeakers embraced by audiophiles. Chinese manufacturer Dared is now importing recreations of the original Rogers designs, including the two shown above: the smaller, $1900/pair LS3/5 (shown atop an optional subwoofer base) and the $3900/pair LS5/9 65th-anniversary model. 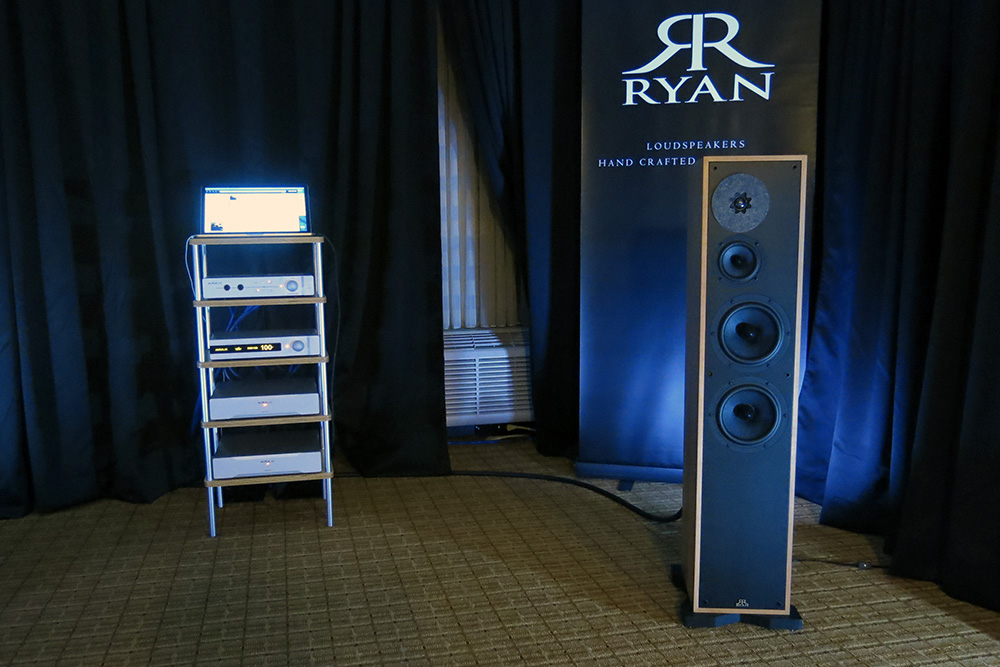 Speaker designer Todd Ryan has worked at Sonance for as long as I can remember, focusing on in-wall, in-ceiling, and outdoor speakers. His new side project, Ryan Speakers, lets him show what he can do in another venue. The line consists of a $2000/pair bookshelf speaker, a small tower at $3500/pair, and the $5000/pair R630 tower shown here. They're all built in Riverside, California, using custom drivers. The R630 ranked among the best speakers I heard at RMAF, with a neutral, colorless sound that reminded me of my Revel F206 speakers. 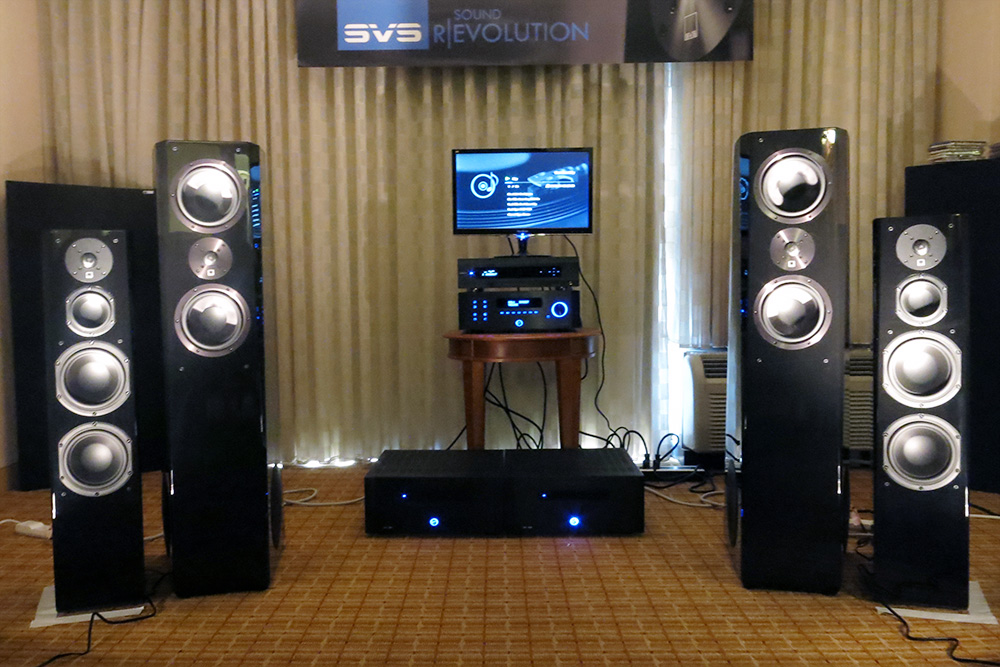 SVS's Ultra-series speakers won acclaim for their sound, but not for their relatively large sizes -- and they weren't quite as big a value as the company's subwoofers. The new Prime series is much more compact and affordable. The flagship of the Prime line (shown here next to the larger Ultra Tower) is the Prime Tower, which costs $999/pair in matte black or $1199/pair in gloss black. It's a 3.5-way design; the bottom woofer is there only to help out with the low bass. In the demo it sounded incredibly smooth and neutral, especially for a $999/pair tower. Bookshelf models are also available. 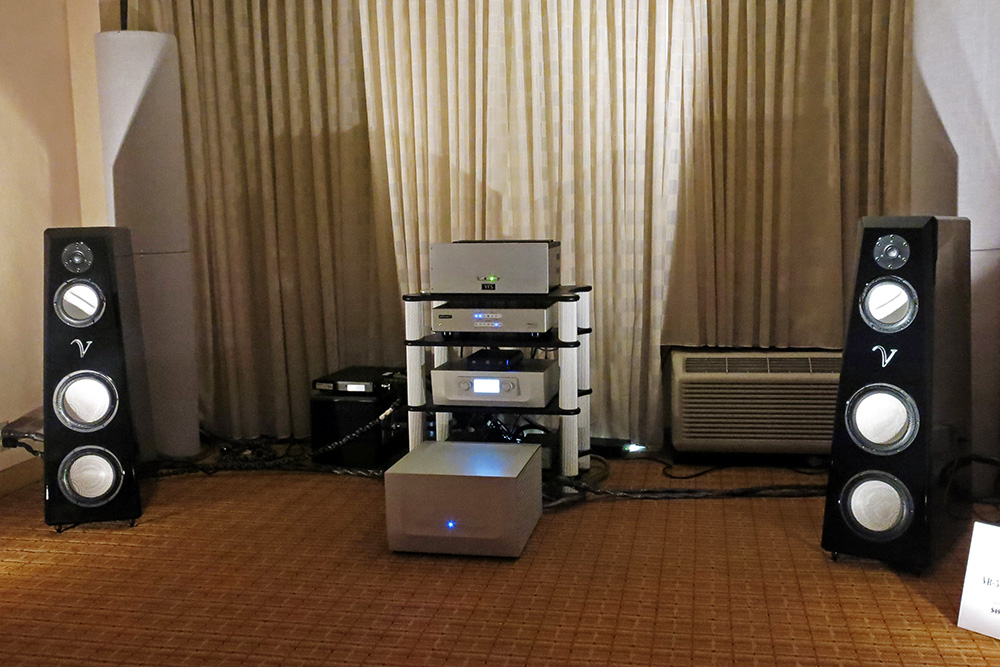 The Von Schweikert Audio VR-55 Aktive speaker breaks with audiophile tradition by using a built-in amp, but in this case the 400W class-D amp powers only the bass drivers. At the RMAF demo, the VR-55's midrange and treble drivers got their power from a Constellation Audio Centaur stereo amp. The built-in amp allows the user to fine-tune the bass response to suit the room. The speaker's damped beryllium tweeter is said to reduce distortion to less than 0.5% (which for a speaker is really good). I was impressed by the VR-55's combination of raw bass power and midrange/treble clarity and finesse. The VR-55 Aktive runs $49,995/pair; passive models start at $42,000/pair. 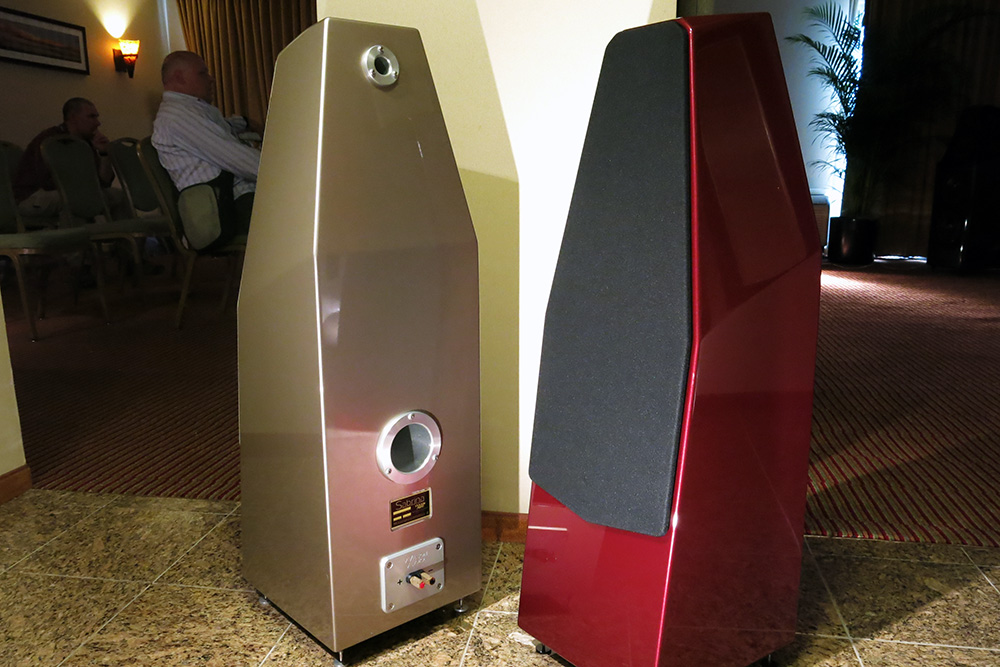 Wilson Audio's new Sabrina is a compact (for Wilson Audio, at least) tower speaker with an 8" woofer, a 5" midrange, and a 1" tweeter. It wasn't on demo at RMAF because the woofer design isn't finished yet. Expect an early 2015 introduction and a price of about $15,000/pair.