Loudspeakers of All Shapes, Sizes, and Prices

Is there any product category as polarizing as loudspeakers? Audiophiles can become so brand-centric that discussions on Internet forums can resemble guys at a sports bar raving about their favorite NFL teams. And why not? Models of loudspeakers vary wildly in look, build, and sound. Look no further than RMAF 2013 for proof of that. 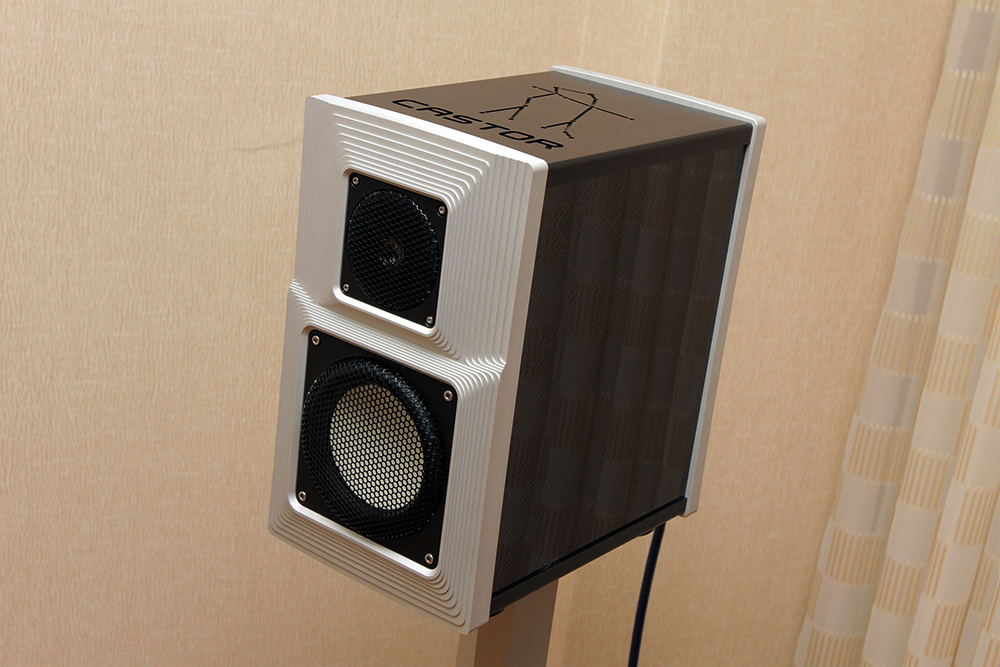 The compact Astell&Kern Castor loudspeaker is a two-way stand-mounted model featuring Accuton drivers: a diamond-dome tweeter and a ceramic-cone midrange-woofer. 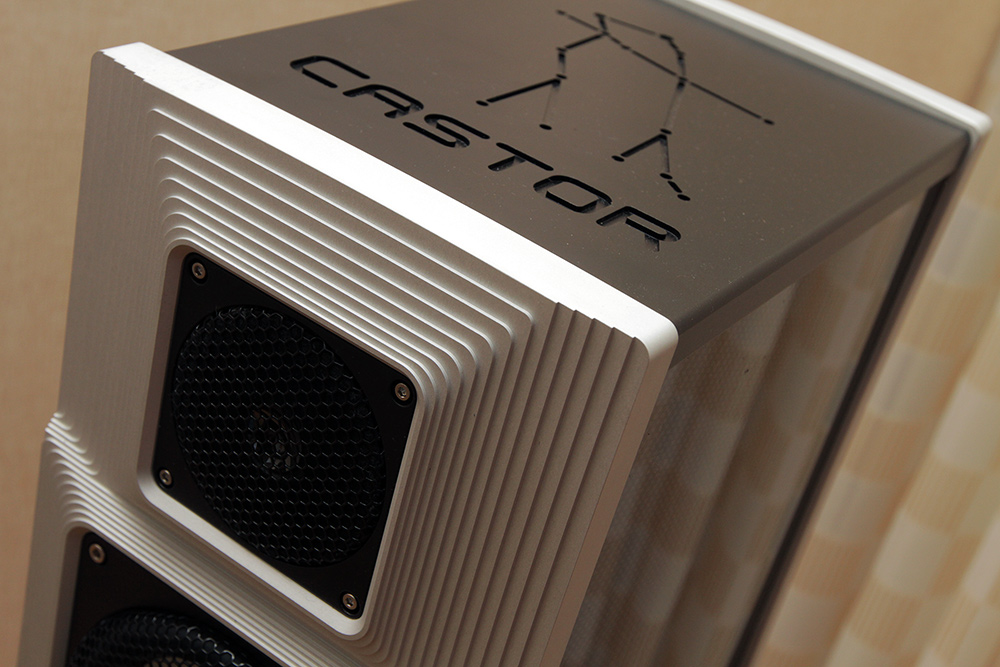 The cabinet is made from duraluminium, which is a "high density" aluminum alloy that, in the Castor, is coupled with six layers of carbon fiber for what is said to be a very inert cabinet. The price is to be announced, but expect it to hover around $30,000 per pair -- so not cheap. 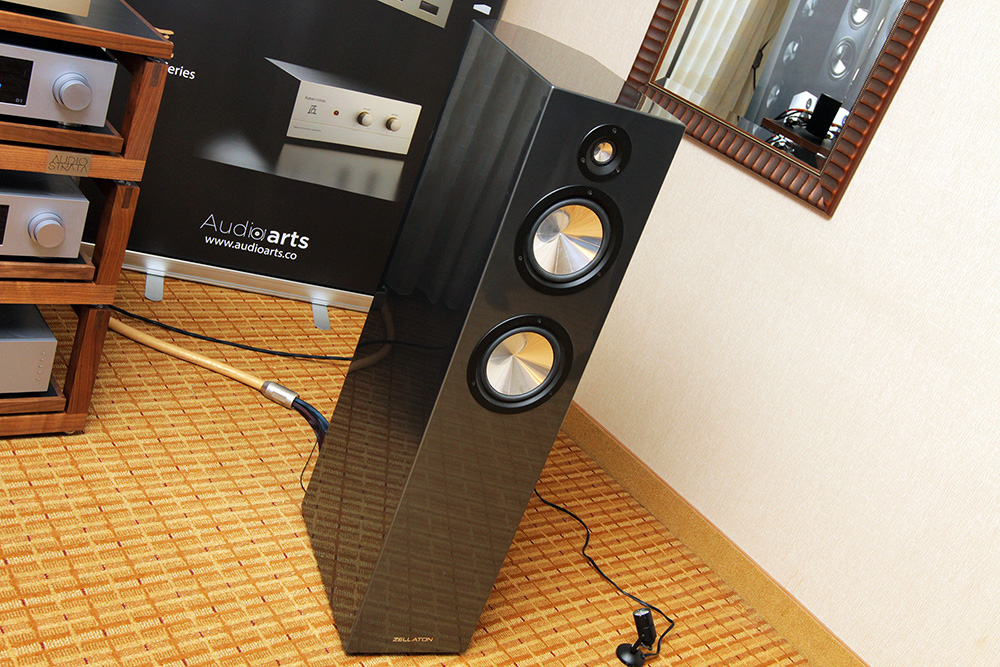 The three-driver Zellaton Grand Purist uses Duelund Coherent Audio "custom cast" crossover components and comes in a selection of Audi-derived colors. The price of this midsized floorstander is $49,750 per pair, which makes it expensive, but the paint-work and finish quality are some of the best we've ever seen. 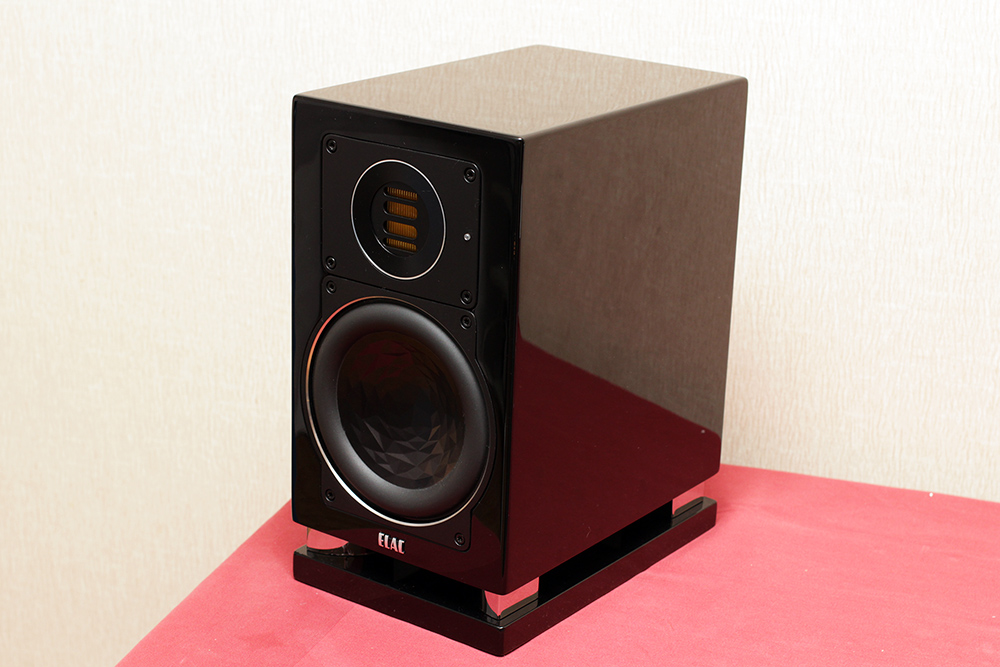 Germany's Elac showed their new Air-X 403 wireless loudspeaker, a model that contains a 210W class-AB power-amplifier module -- 70W for the tweeter and 140W for the woofer. 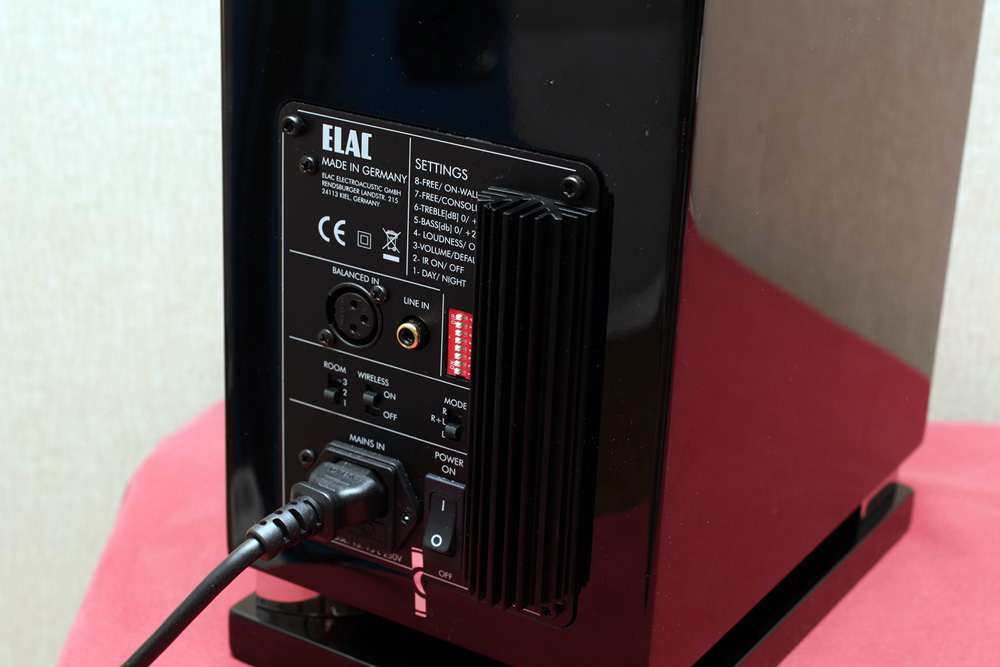 The Air-X 403 speakers can also be used in a wired configuration, as the back panel shows. The price for the Air-X 403 will be around $4000 per pair when they become available later this year. 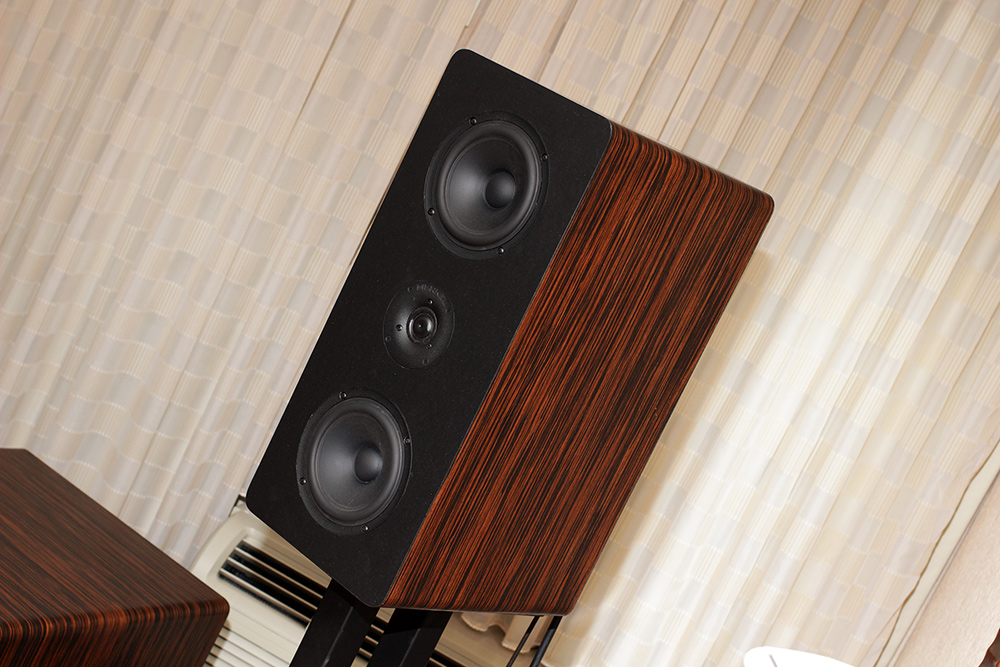 Merkel Acoustic Research and Design fabricates custom "one-off" speakers that can be used in the studio or the home. The RS-6S2 shown at RMAF 2013 retails for $5000 each. This model is an active design that uses DSP-based crossovers and comes with analog and digital inputs. The loudspeakers are said to be completely "green" as well, using water-based adhesives and remanufactured wood products in their construction. 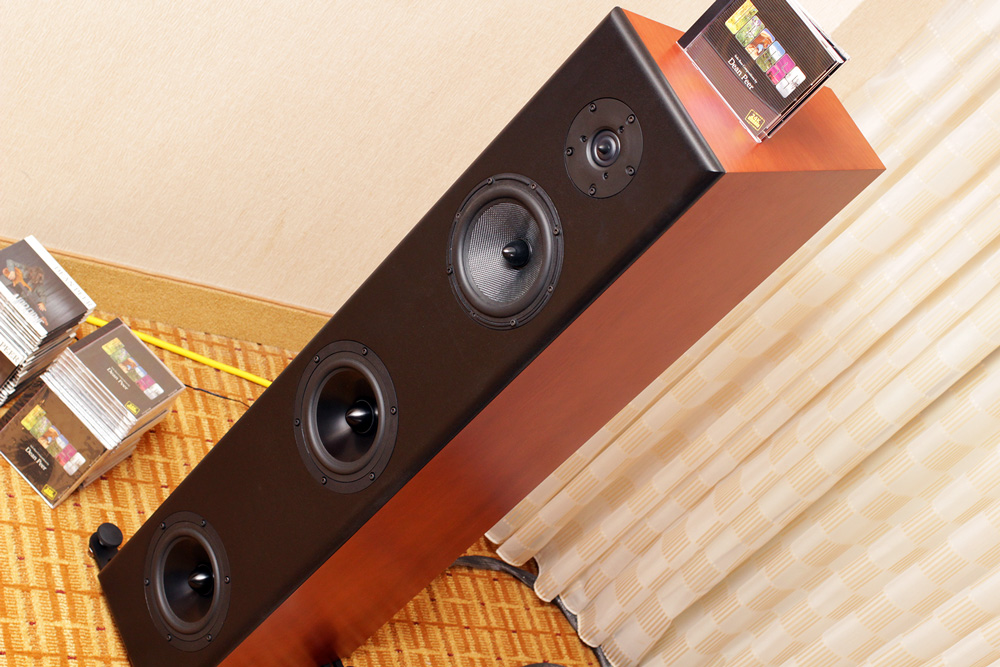 The Endeavor Audio Engineering E-3 floorstanding loudspeaker ($5995 per pair) uses what the company calls "classic aesthetic design" to house a three-way configuration that features a pair of 175mm woofers, a Ring Radiator tweeter, and a Kevlar-cone midrange. The bass response is claimed to be 32Hz (-2dB). 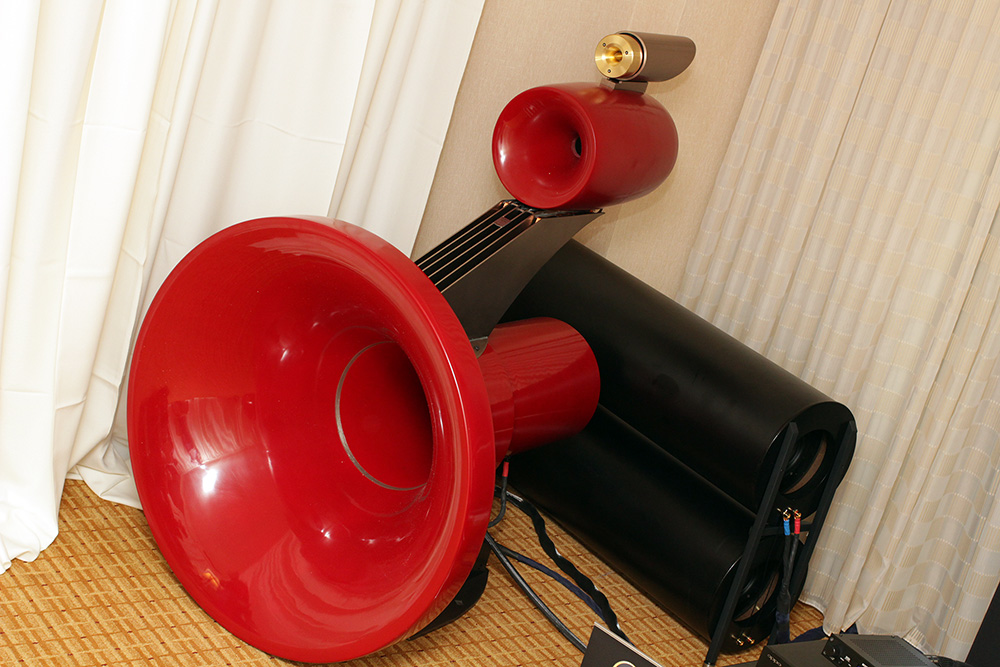 Sadurni Acoustics showed the Staccato horn loudspeaker, which features separate stackable subwoofers along with the three horns shown. The system is said to be horn-loaded from 120Hz up. The bass system uses an active crossover, whereas the horn portion is passively crossed over. The retail price is $30,000/pr., which includes the four subwoofers (two per channel) shown. 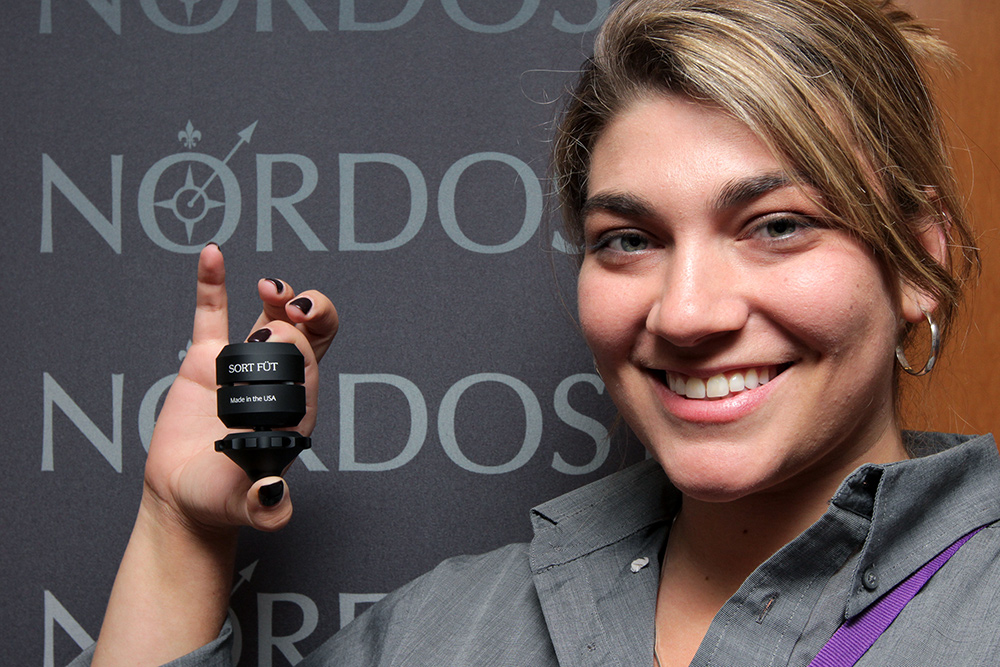 The Nordost Sort Fut certainly is not a loudspeaker, though it is designed to enhance them. They're priced at $350 each, and Nordost's Meredith Gabor told us that they're made to replace the stock feet on your speakers (or even your equipment rack). A pack of four, called the Premium Package, comes with a laser level and multiple thread sizes -- 8mm and 6mm -- and is priced at $1500.