When I arrived at Hotel Bonaventure just before noon on day one of the Montréal Audio Fest 2019, there had to be at least 100 people in the registration lineup. So, not surprisingly, exhibit rooms were busy throughout the day.

My beat is electronics, specifically new electronics, and I came upon some interesting gear from established brands, including Canadian stalwarts Bryston and Simaudio. But what really struck me were the interesting (exotic actually), highly affordable products from Eastern Europe, making their North American debuts. This equipment might not be new to people who have attended the Audio Video Show in Warsaw, but it was new to me. All prices in Canadian dollars, unless otherwise specified. 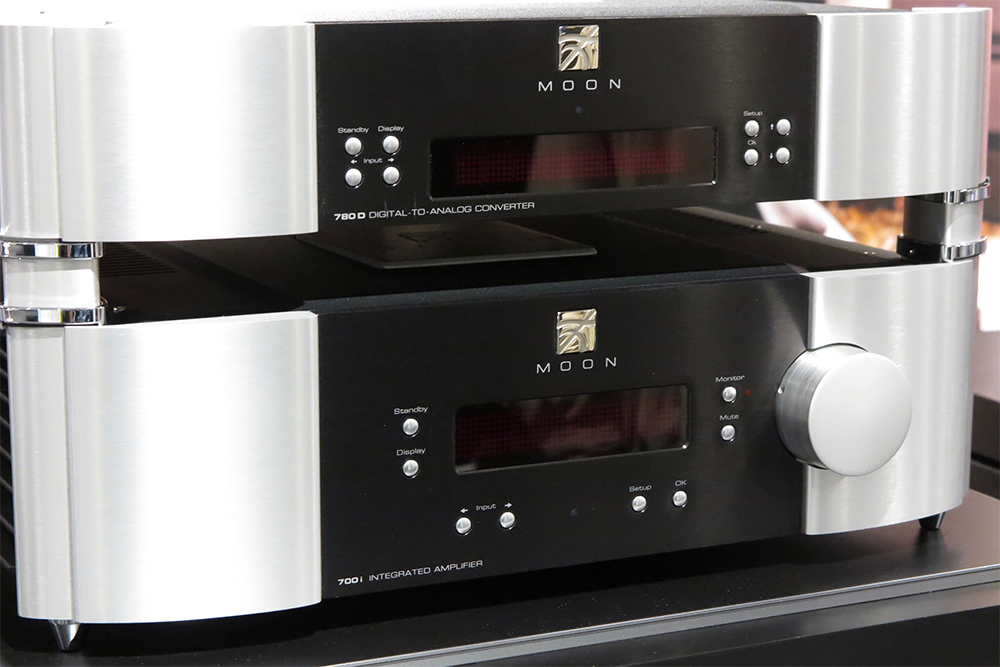 Moon by Simaudio’s demo system included the new 390 controller and two 400M power amps powering prototype Dynaudio standmount speakers. On static display was a new version of its 700i integrated amplifier (bottom component in photo above), which is just starting to ship. New features on the 700i v2 include an encapsulated power transformer, redesigned power supply, and upgraded gain stage. Price remains unchanged at $14,000 USD, as does power output at 175Wpc into 8 ohms.

Simaudio VP Costa Koulisakis also told me about a product announcement coming at Munich’s High End 2019, in May, but swore me to silence. My lips therefore are sealed until May.

Montréal Audio Fest 2019 marked the North American debut of a Serbian hi-fi brand, Auris. The demo system included the Fortissimo stereo integrated amplifier ($15,000), and the D2D DAC ($3000). The Fortissimo is an ultralinear design with manual bias employing KT120 output tubes, rated at 100Wpc. The huge output transformers are the same as the ones used in the company’s 150W monoblock amplifiers. 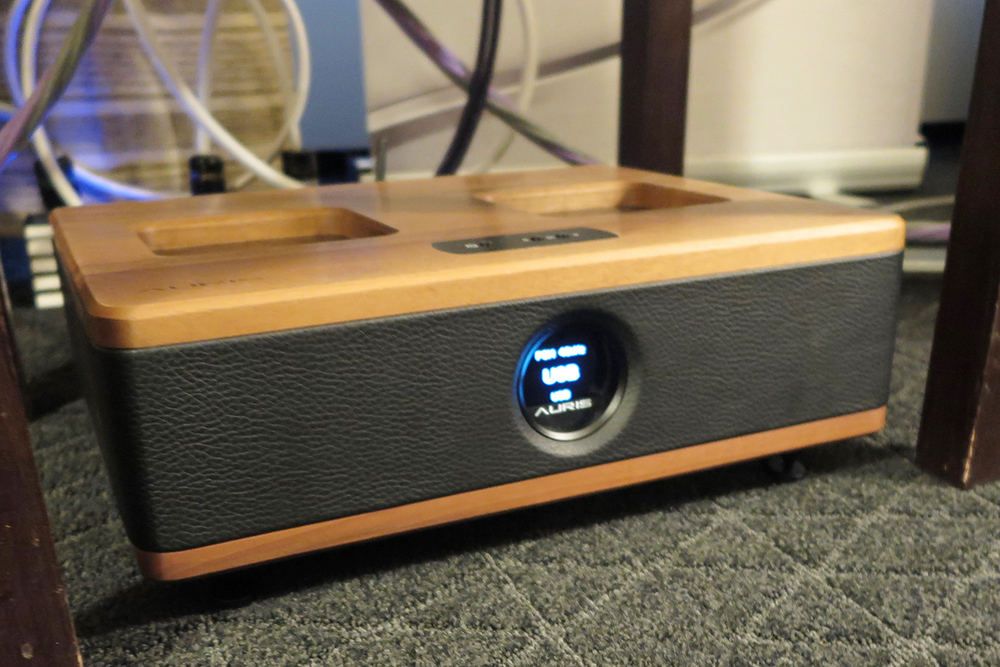 The D2D, which uses a Burr-Brown DAC, has three optical and three coaxial inputs, plus USB with support for native DSD, DXD, and PCM to 24-bits/768kHz. 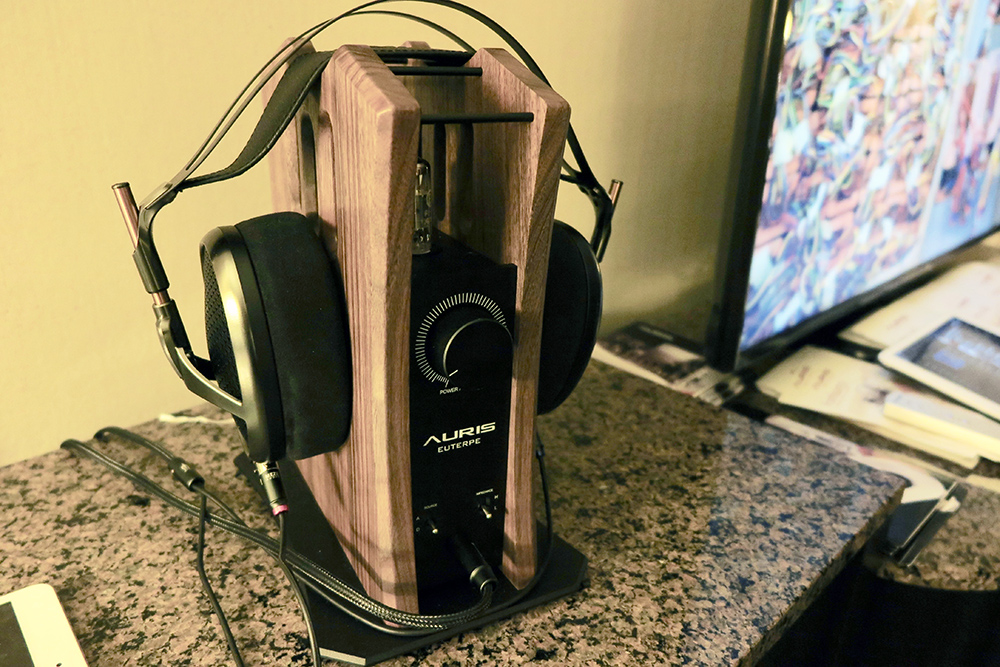 On static display was the Euterpe headphone amplifier-DAC-preamp, which like the D2D, supports native DSD, DXD, and PCM to 24/768. The price ($2000) includes a lyre-shaped headphone stand, which is appropriate, as Euterpe is the Greek muse of music.

Another Eastern European brand making its North American debut in Montreal was Fezz Audio, from Poland, which specializes in tube amplifiers, all of them with automatic bias. All models are available in a range of funky, high-gloss finishes. 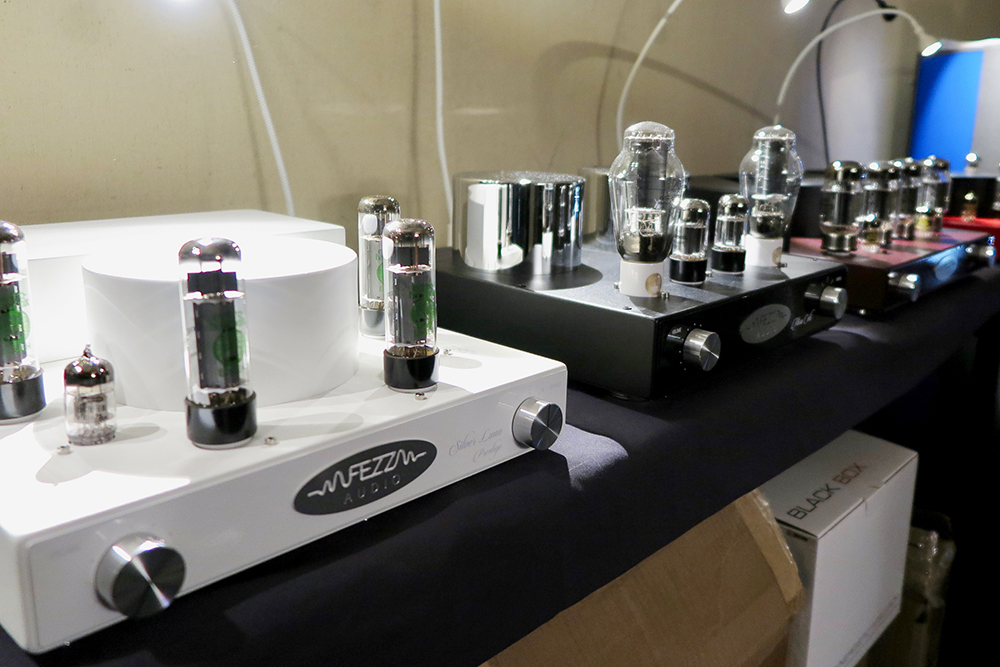 Rated at 35Wpc, the Silver Luna Prestige stereo integrated amplifier ($2650, left in photo) is a push-pull design employing four EL34 output tubes. The driver stage can be operated in tetrode or pentode mode, and two sets of driver tubes are included.

The Mira Ceti integrated amp ($3500, second from left in photo) is a single-ended class-A design rated at 8Wpc employing two 300B output tubes. Rated at 3Wpc, the Mira Ceti 2a3 ($3500) substitutes 2a3 Sovtek output tubes. Both models have toroidal output transformers. 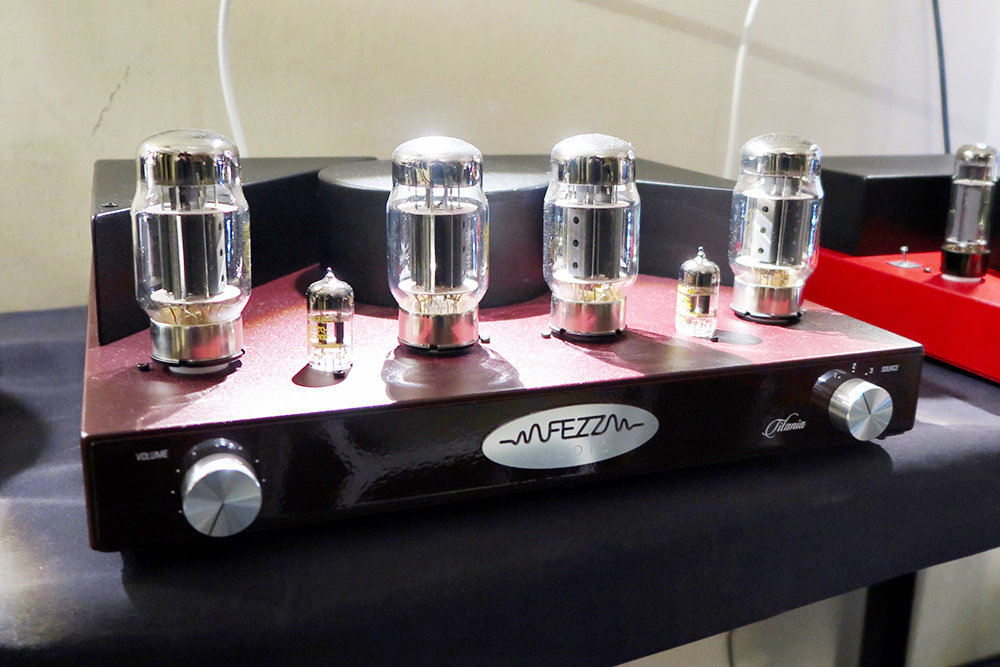 Also making its North American debut in Montreal was the UK brand Tibo, which specializes in affordable lifestyle-oriented audio. The company has active, passive, and Alexa smart speakers, plus some interesting-looking components. On static display were the SIA75 Smart integrated amplifier, Smart Streamer, and PA150 power amplifier. No prices were available, but details were. 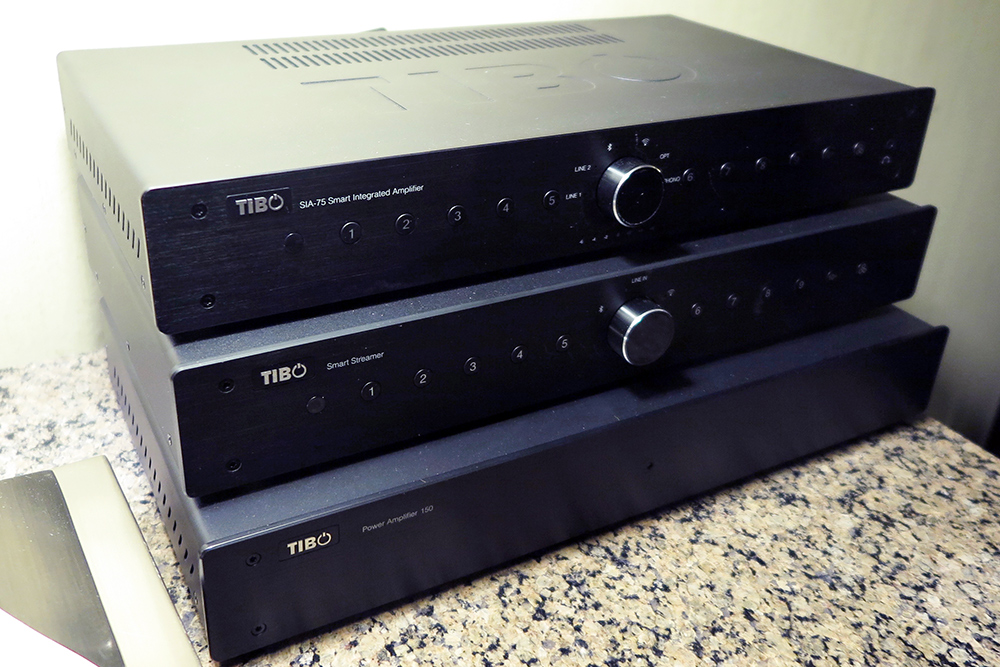 Rated at 75Wpc, the SIA75 Smart integrated amplifier (top in photo) has a built-in phono stage, Wi-Fi, Bluetooth, TosLink optical in, subwoofer out, and support for Internet Radio via a companion app. The Tibo Smart Streamer (middle in photo) also has Wi-Fi and Bluetooth. In addition to using an app, listeners can select Internet Radio stations using the 18 front-panel preset buttons. The Smart Streamer has optical and analog outputs, and can also stream to as many as 16 Tibo products, under control of the Tibo app, for multi-room music. The PA150 power amplifier (bottom in photo) is rated at 150Wpc in stereo mode, or 300W bridged. 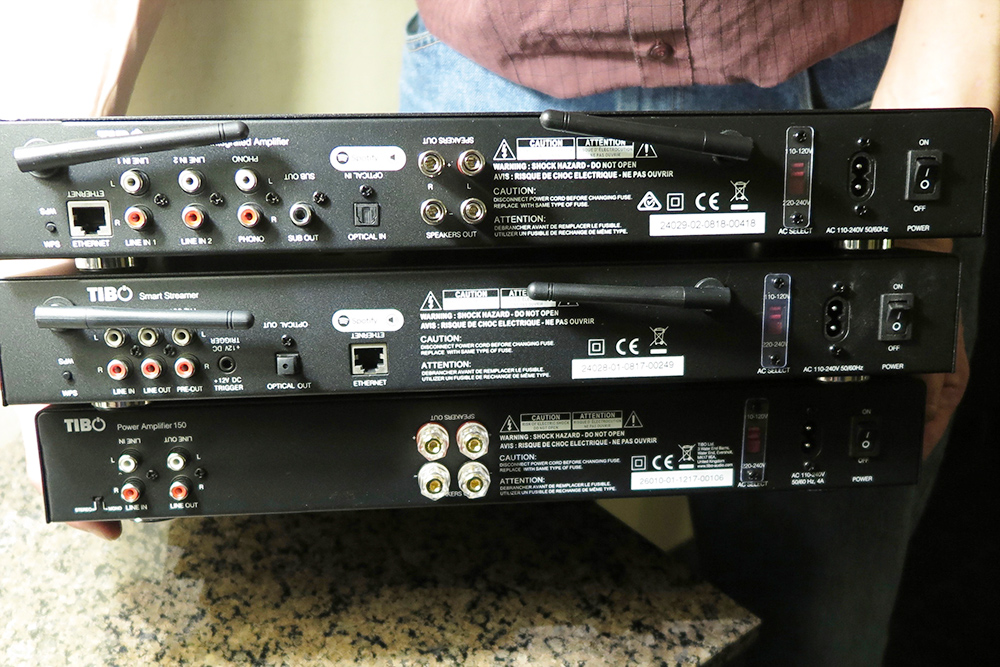 From top to bottom, the back panels of the SIA75 integrated amplifier, Smart Streamer, and PA150 power amplifier.

It is now a custom for Bryston to demonstrate a big, active loudspeaker system at audio shows. It continued this tradition at Montréal Audio Fest 2019, with a big active system consisting of stacked Middle T tower speakers, BAX-1 digital active crossover, two 21B3 power amps, BDP-3 digital player, BDA-3 DAC, and BP-26/MPS-2 preamp. All of these are current products. 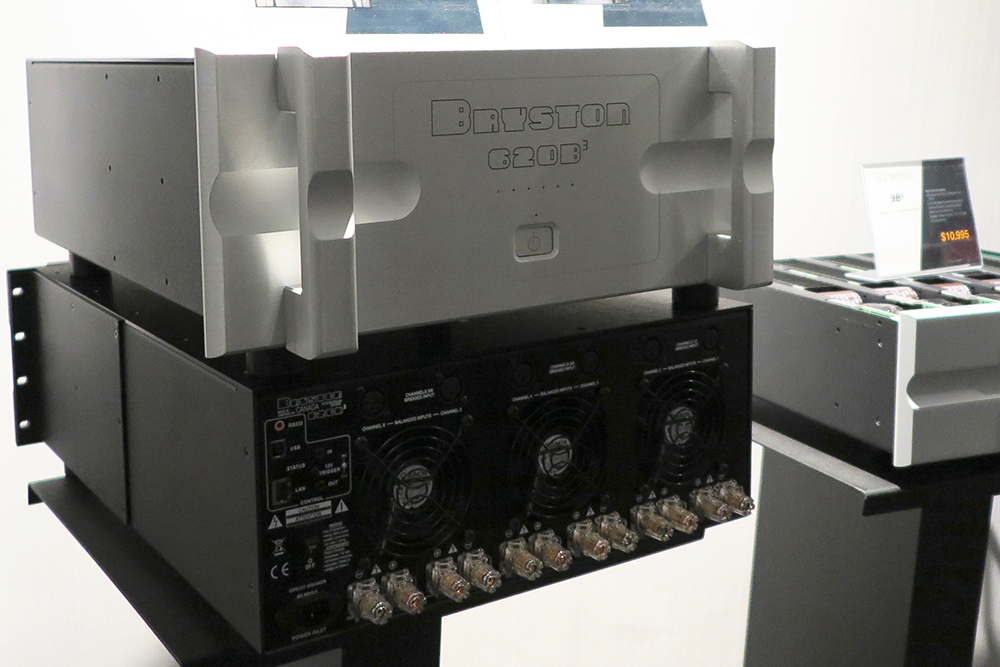 Available in pro and consumer versions, the 620B3 is rated at 6x200W. It was developed at the behest of StormAudio, whose technology is the basis of Bryston’s SP4 16-channel surround processor. Price TBA. 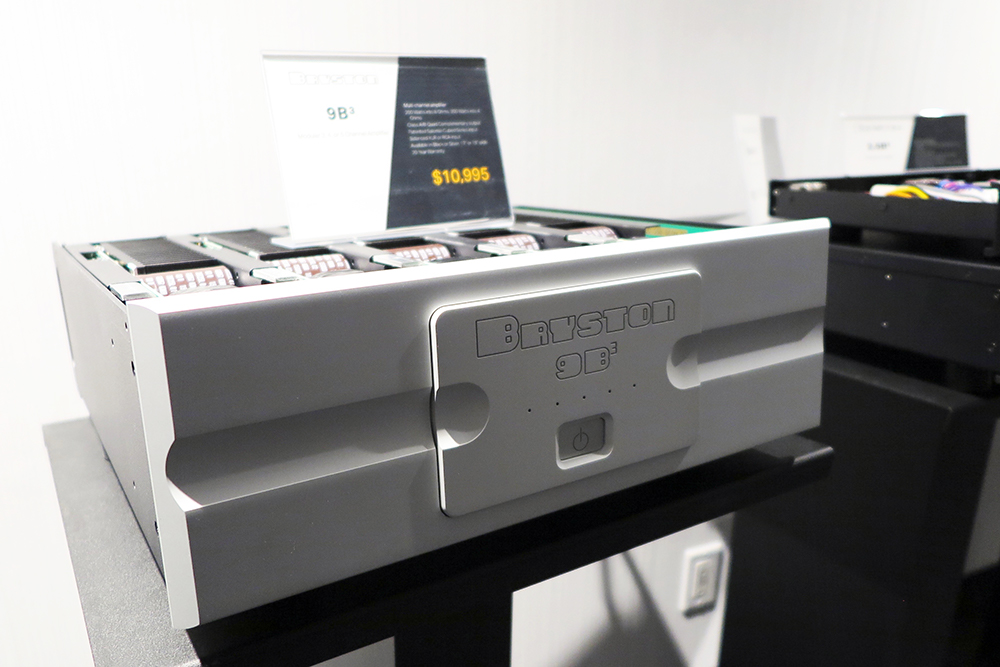 Priced at $10,995, the 9B3 is rated at 5x200W, and has both balanced and RCA inputs. It can also be configured for three- and four-channel operation. Like other Cubed-series amps, the 9B3 and 620B3 both feature Bryston’s Salomie ultra-low-noise input circuitry.

For the past couple of years, Yamaha Canada’s demo systems for audio shows have been built around its NS-5000 three-way speakers, whose drivers use diaphragms made of a highly rigid synthetic fiber called Zylon. The NS-5000s were on demo once again in Montreal, in a system that included a new belt-drive turntable (still in prototype stage), and Yamaha’s new flagship two-channel preamp and power amp, both of which ship in May. 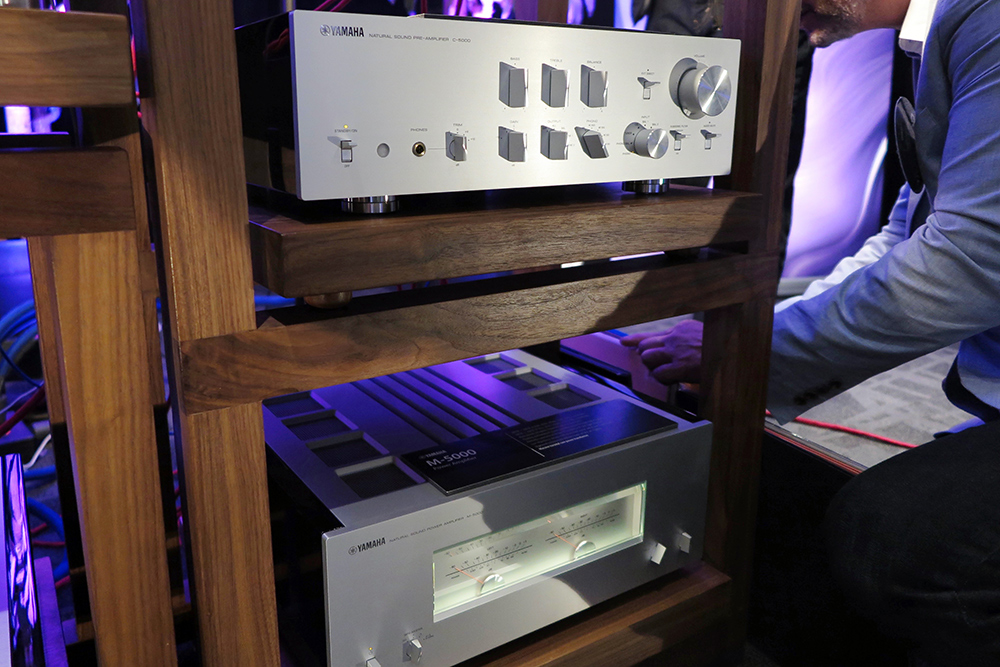 The C-5000 preamp ($10,995, top in photo) has an MM/MC phono stage with RCA and balanced inputs, separate power transformers for the left and right channels, matched symmetrical circuit boards for the left and right outputs, copper-plated chassis, and an aluminum top cover with beveled inserts for heat dissipation. Also shipping in May for $10,995, the M-5000 power amp (bottom in photo) has a massive 1200VA toroidal power transformer and four 33,000µF Nippon Chemi-Con storage capacitors. Rated at 100Wpc into 8 ohms or 200Wpc into 4 ohms, the amplifier is said to be stable into 2 ohms. It’s fully balanced, from input to output.