The Montréal Audio Fest was jumping this year. Over the last two years I’ve felt a buzz ramping up at this show, but 2019 feels like it’s on another level. It’s like adding more mass to an already massive sun -- eventually it reaches a critical mass and begins to contract under its own weight. So goes it with the MAF. There were more exhibitors this year, and the Friday of the show, which is usually quite sedate, was just packed with showgoers. All good omens for the future of the show.

Analog was rocking along, too. I’d guess that about half the rooms had a turntable on hand. Half of those were on static display, just sitting there for the street cred they bestowed on the room, I suppose, but that still left a quarter of the rooms spinning records. Here are some of the turntables and related products I found, with all prices in Canadian dollars unless noted.

I’ve kept my eye on the Yamaha / Luna Cables room for a few years now. They’ve always demoed their system with a turntable front and center -- the Yamaha GT-750, a chunky vintage ’70s model that’s also known as the Gigantic and Tremendous. It even had that written on its front nameplate, for crying out loud. 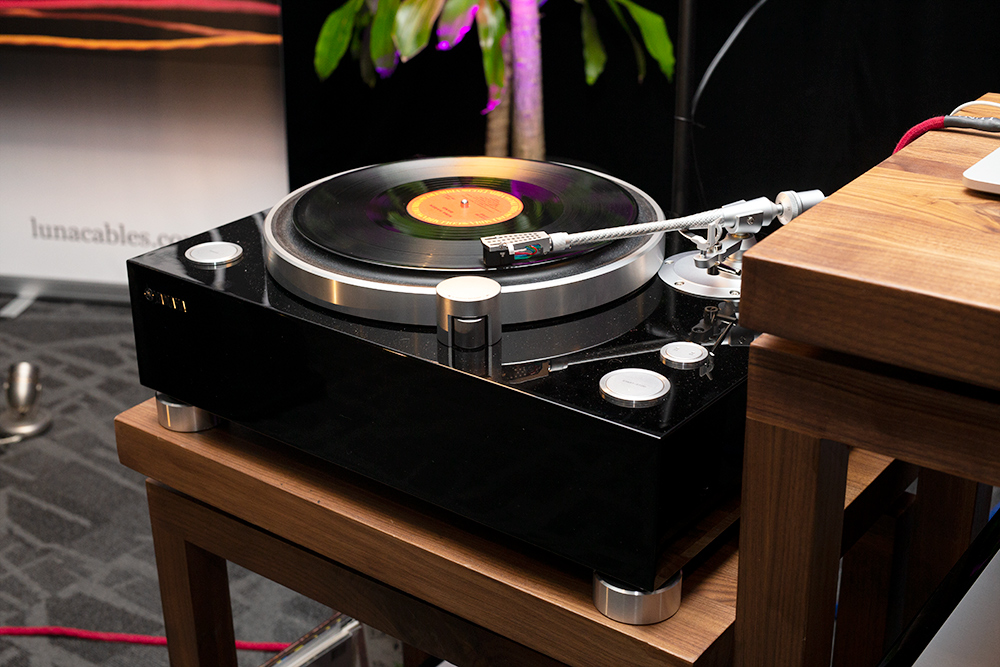 This year, however, Yamaha premiered the new GT-5000, a fairly large ’table that’s obviously descended from the Gigantic and Tremendous. Weighing in at 58 pounds, and presenting a large footprint, the GT-5000 looks imposing and elegant in its satin black finish. This belt-drive turntable features a 4.5-pound, solid-brass subplatter and an 11-pound aluminum platter. The tonearm is beautifully figured, and is constructed from aluminum, carbon fiber, and copper. Bolted to the end of that tonearm was a Koetsu Black cartridge. Yamaha hasn’t yet set a Canadian retail price for the GT-5000, but word has it that it’ll come in somewhere around $8000. 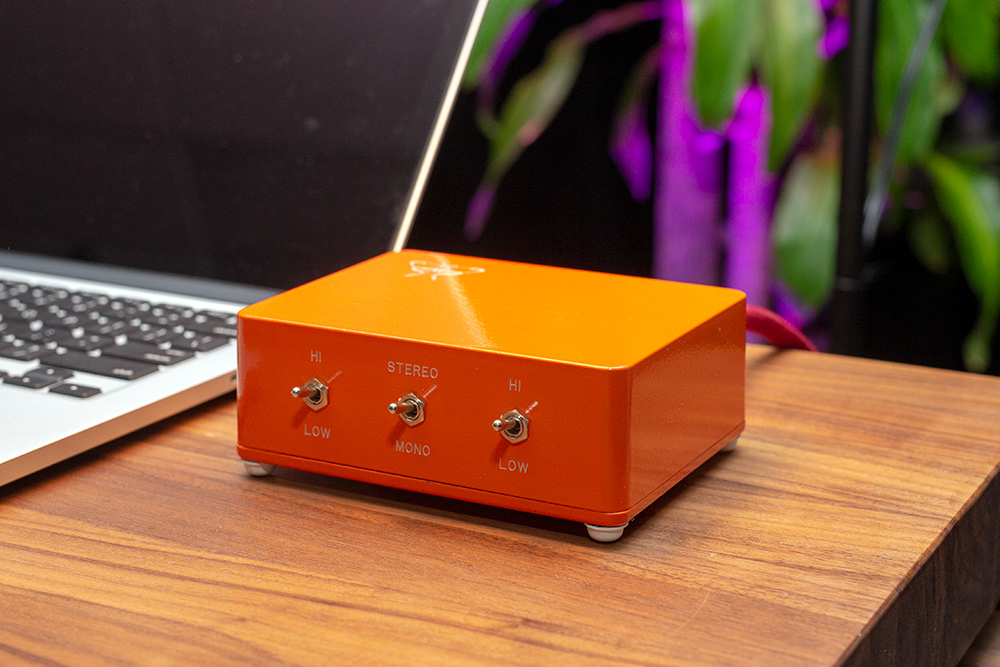 Also on hand, and in use with the GT-5000, was the Luna Cables Orange step-up transformer. Delivering around 26dB of gain -- depending on cartridge load -- the Orange has selectable high- and low-gain settings, and a handy mono switch. The chassis is manufactured from resonance-optimized diecast aluminum, and it’s handmade in Canada. The Orange retails for $2500. 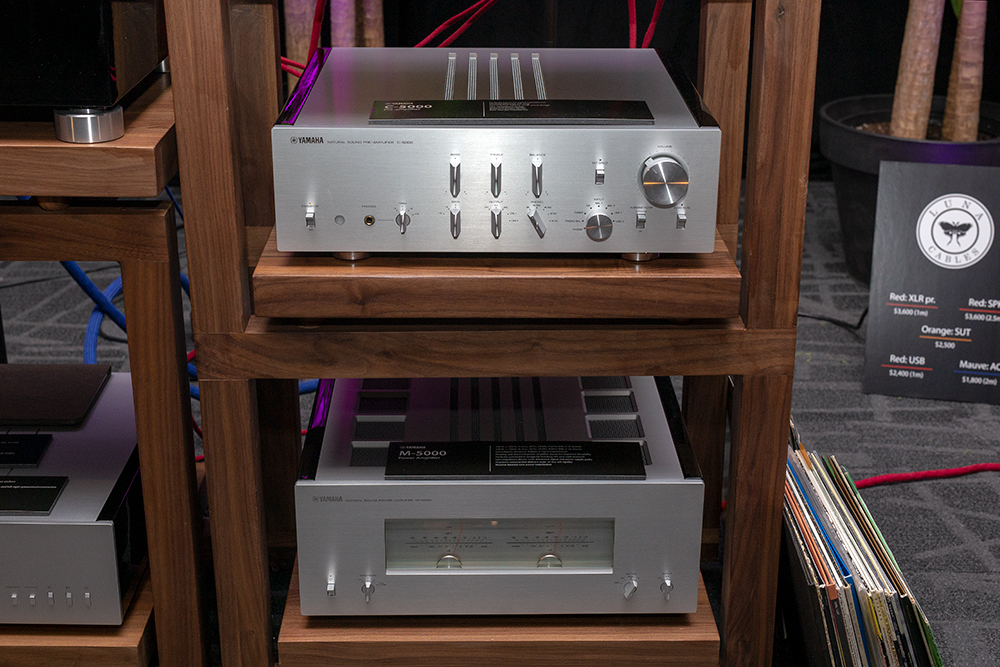 All together, fronted by the Yamaha NS-5000 speakers and the chunky C-5000 preamp and M-5000 amp, the system sounded rich and juicy, with a delicate, detailed top end. This is a serious assault on the high end from a company with a storied past. 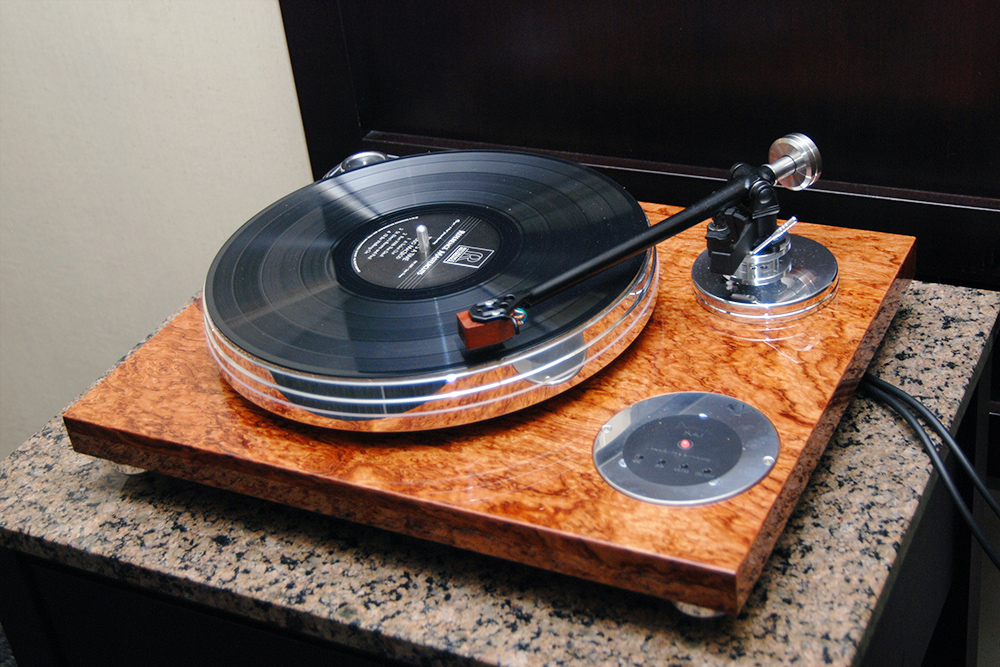 Bubinga! This turntable is made from bubinga! That’s so much fun to say. Seriously though -- while the Acoustic Solid 113 Bubinga turntable playing in the Coup de Foudre room isn’t actually new, it just leapt out and forced me to take its photo. The veneer looked absolutely stunning, with the gloss lacquer seeming an inch deep. While I’m sure that the wood Acoustic Solid used for this veneer is responsibly farmed, it sure looks like it’s old growth. Perhaps this was the last tree? 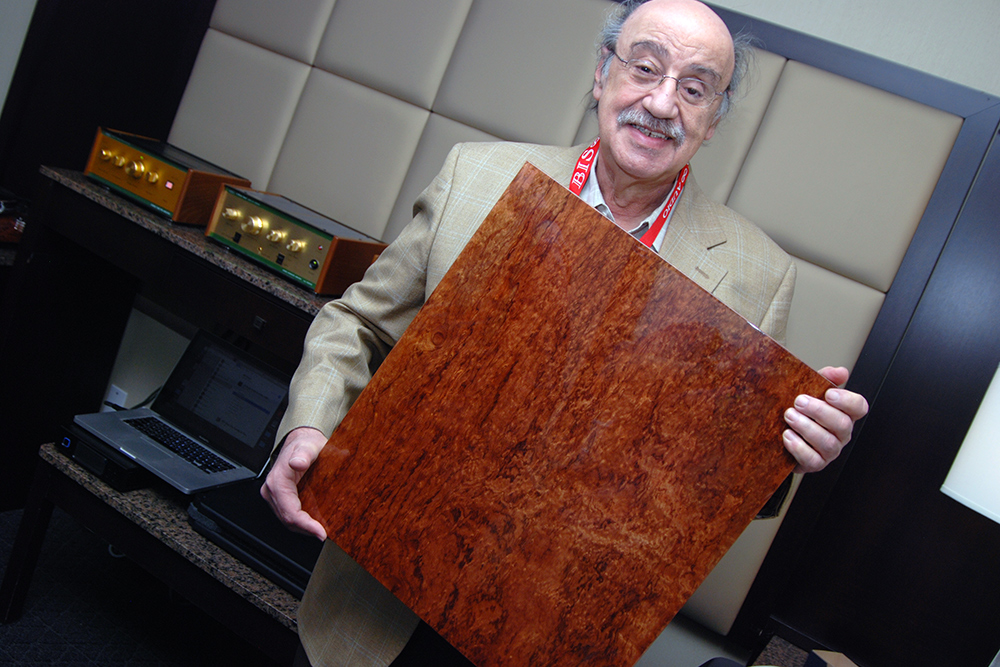 Vince Scalzitti of Tri-Cell Enterprises, the distributor of Acoustic Solid, brought over the 113 Bubinga’s Sound Board isolation platform for me to ogle -- it’s veneered in a whole bunch more of this tasty wood. The 113 Bubinga retails for $3250 with tonearm, and the Sound Board adds another $1250 to the total price.

VPI’s headquarters in Cliffwood, NJ, is within striking distance of Montreal, and for the last two years Mat Weisfeld (president) and Harry Weisfeld (founder) have made the trek up to the Montréal Audio Fest and peppered a number of rooms with their turntables. This year’s show was especially auspicious for VPI, as it marked the world show premiere of the company’s new HW-40 Anniversary Edition. The Anniversary Edition of the HW-40 will be limited to 400 units, after which a regular edition will be available. 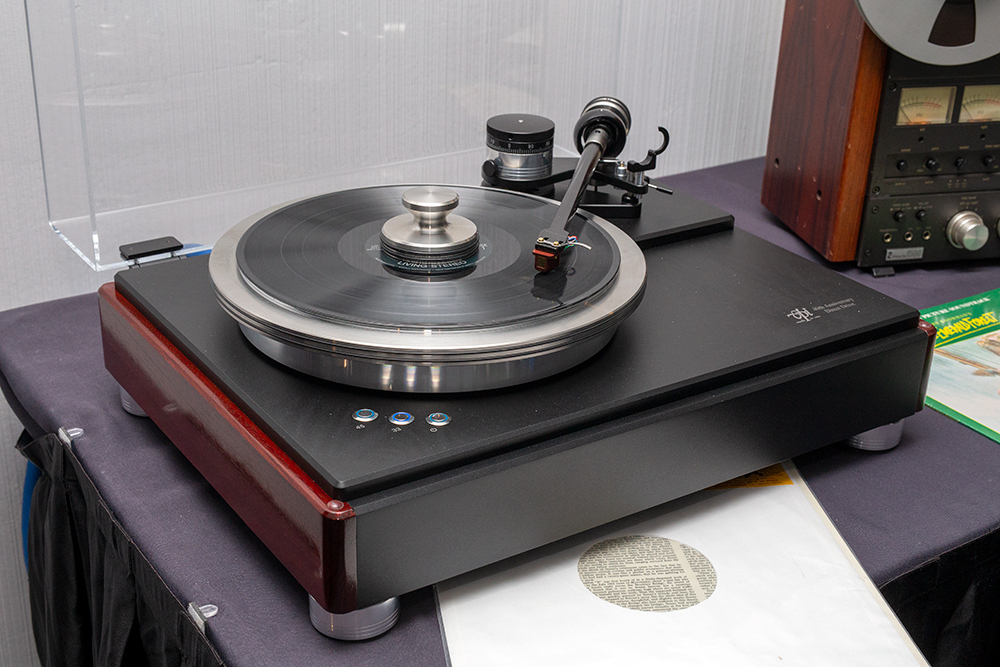 The HW-40 is a direct-drive turntable that uses a three-phase AC motor that has its coils aligned in such a way to ensure that two poles of the motor are always engaged, thus negating any possibility of cogging. Looking studly and nicely appointed, the gimballed Fatboy 3D-printed tonearm features a new profile -- triangular near the headshell, tapering to a round cross-section near the pivot. The Fatboy VTA base is absolutely massive, and it projects a rock-solid, robust feeling.

Much work went into the HW-40’s feet, and Mat Weisfeld demonstrated the effectiveness of its isolation -- the polycell foam handily dissipating some extremely hard thumps on the somewhat rickety convention-room table. The HW-40 Anniversary Edition sells for $15,000 USD and adds in the robust dust cover, solid black-walnut side panels, and a plaque signed by both Mat and Harry. 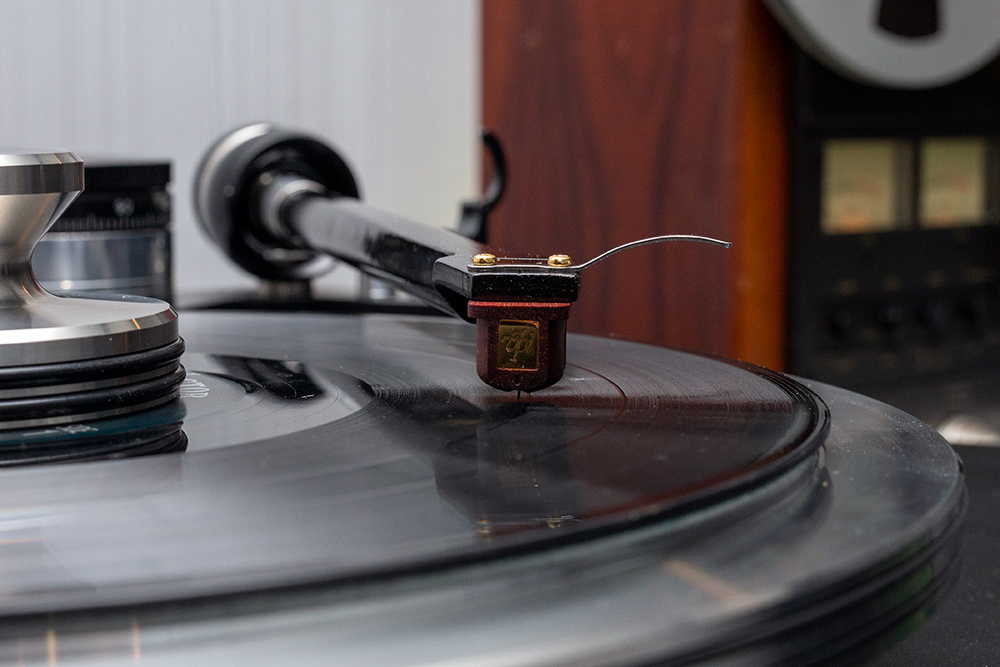 And if that’s not enough brand-new stuff from a company that’s essentially hi-fi royalty, VPI also brought its yet-to-be-named moving-coil cartridge. Manufactured by Miyajima Labs as a special favor to Harry, who’s a close friend of Noriyuki Miyajima, the new VPI cartridge features a boron cantilever and an elliptical stylus. With a reasonable 0.3mV output and a threaded cocobolo body, this cartridge promises to be user friendly, and its reasonable $1500 USD price suggests it’ll be friendly to the wallet as well. 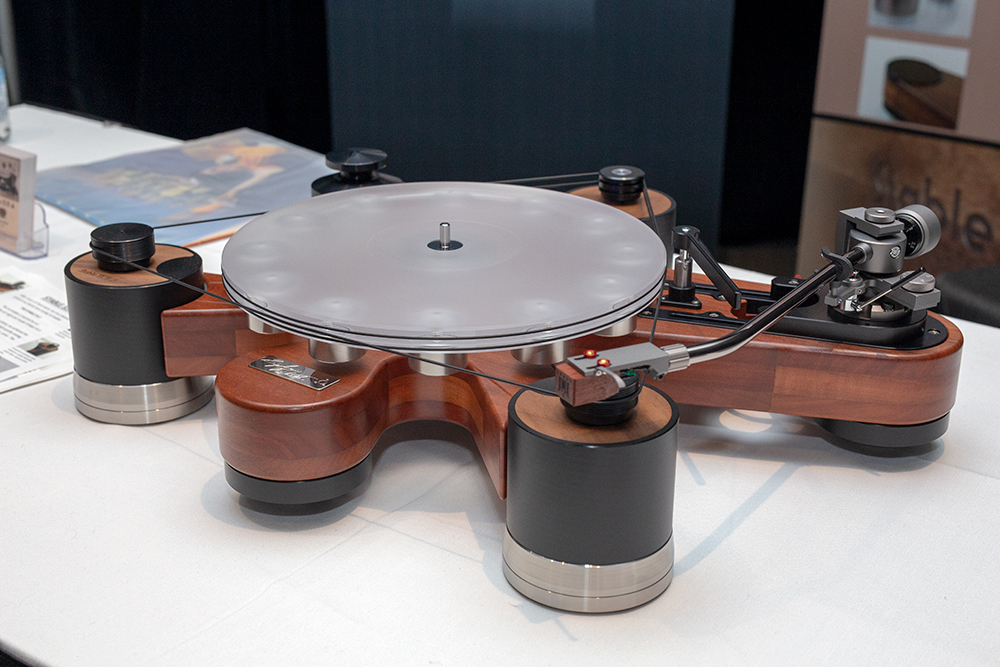 Look what I found! A brand-new turntable from a brand-new company! Stable 33.33, which is based in Gatineau, Quebec (two hours by car from Montreal), introduced its Stable 33.2 turntable. At $12,000 including tonearm, the Stable 33.2 is packed with unique features. What jumped out at me was . . . 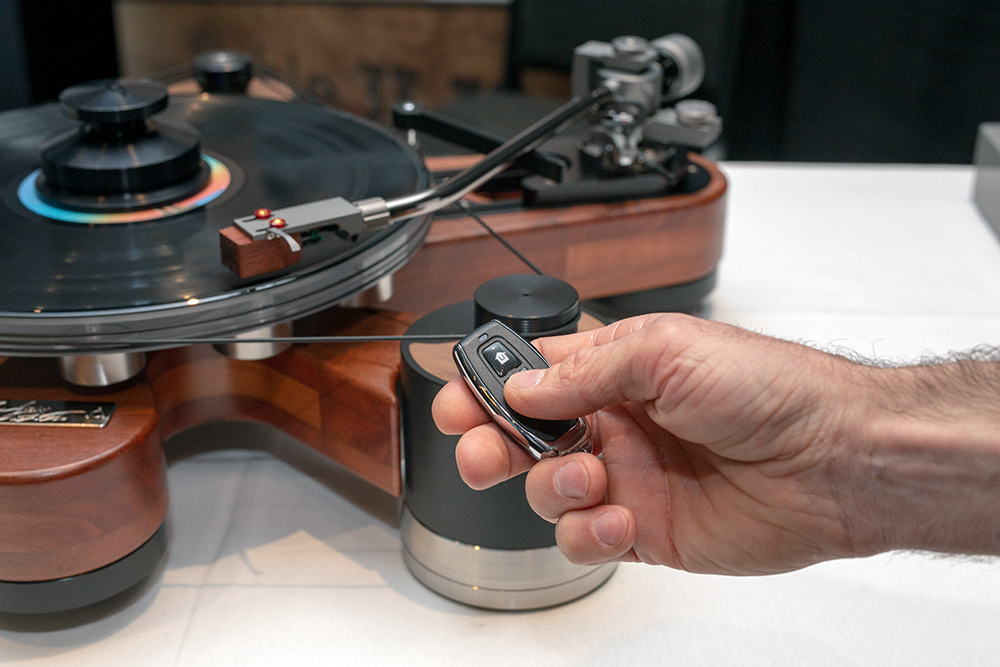 . . .the remote-controlled cueing actuated by a key-fob-type remote. Additional cool features include three pulleys distributed around the perimeter of the ’table to equalize forces on the bearing, a cushioned “landing pad” for your record weight, and stainless-steel weights attached to the underside of the platter to add rotating mass. The Stable 33.2 is a nice-looking turntable that appears to be well-designed.