First order of business at the Montréal Audio Fest 2019 is to scour as many of the used record bins as possible before the crowds dig up all the uncut diamonds.

I was this close to nabbing a Mobile Fidelity Sound Lab Crime of The Century, and I congratulated the bastard who got to it before me, all the while silently cursing him out. I did, however, land a MoFi Showdown! and a half-speed-mastered Bridge Over Troubled Water for $30 each. A good deal for two records I didn’t know I needed. So it goes in the world of obsessive vinyl consumption. 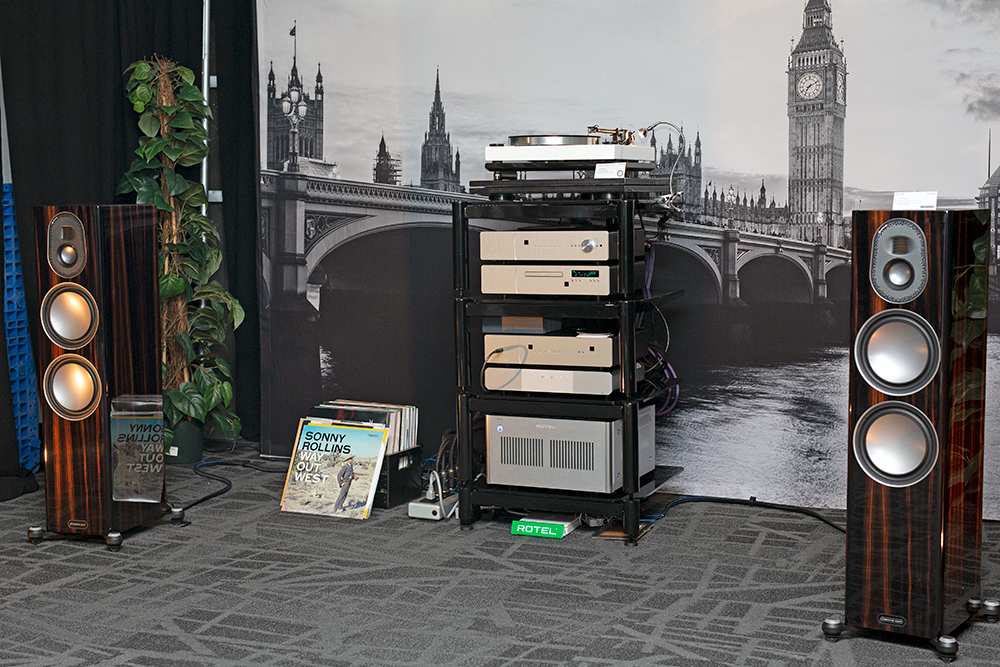 As I turned to leave the booth with the records, I spied Sheldon Ginn of Kevro International Inc., the distributor of Monitor Audio, Roksan, and now Rotel. Fronting the system was the Roksan Xerxes 20, which was loaded with a Shiraz cartridge. Mounted to this turntable was the company’s so-new-it’s-not-available Sara arm, which is a cool-looking unipivot design. Please don’t tell anyone about this arm, as it’s so hush-hush that there’s a news embargo in place and no price given. 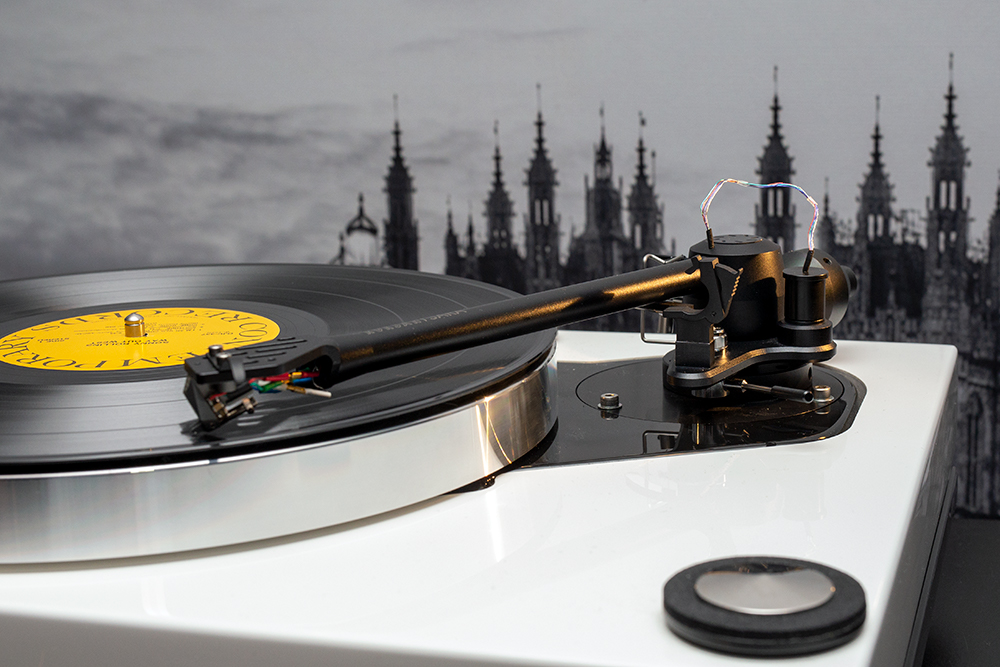 Eager to hear the Shiraz/Sara/Xerxes 20 combo, I pulled out Showdown! Jeremy Brown, Monitor Audio’s international account manager, slapped it on the ’table.

It sounded awful -- no top end, and it skipped every few seconds. A closer examination revealed that, yes, $30 was about as much as I should have paid. There were no real scratches, but it was, essentially, filthy.

Brown handed the record back to me and suggested I drop by the Kirmuss Audio booth, just down the hall, and have the good Dr. Kirmuss work it over.

Now this is the sort of thing you can do only at audio shows -- buy a used record, listen to it on top-rent gear, get it cleaned by a professional doctor wearing a most impressive white lab coat, and then evaluate the results. Let’s do it, I thought to myself. 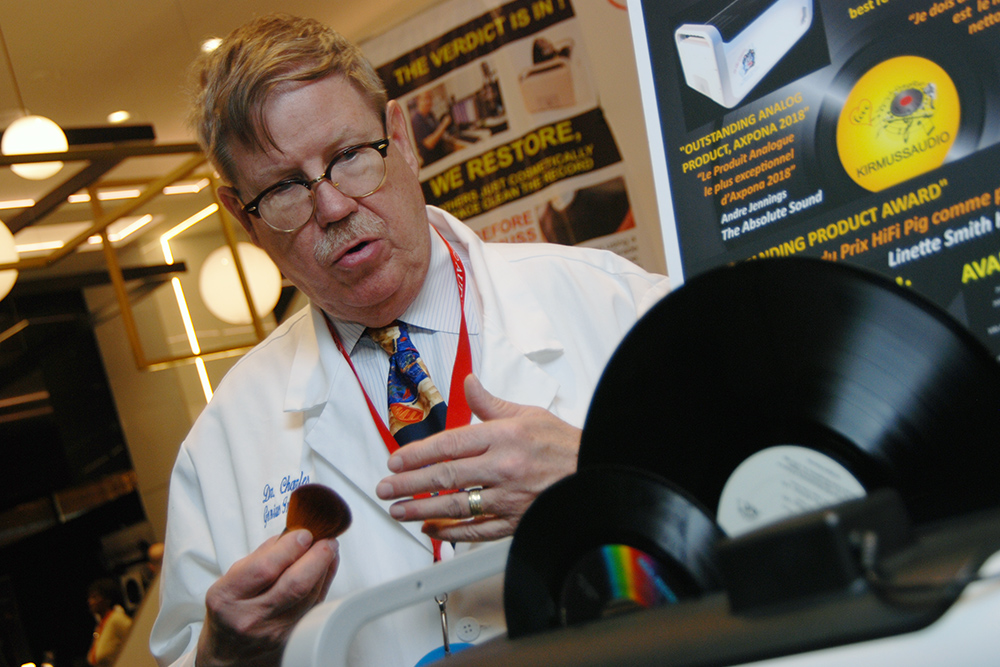 I ambled over two booths, sought out Charles Kirmuss and explained my proposal. He was game. After all, that’s what he was there to do -- demonstrate his KA-RC-1 ultrasonic record cleaner and washing regimen. It’s the same machine that John Thompson, of The Record Centre, raved about in our SoundStage! Expert video about it.

And it sure is a regimen. He doesn’t just pop the record in the machine and Bob’s your uncle. No, it’s a complicated rigmarole. First step is an ultrasonic spin in the KA-RC-1 to lube the record up. Then it’s on to a rotating platform, where he sprays it with a surfactant and proceeds to lightly scrub down both sides with a soft camel-hair brush. Then back into the ultrasonic machine for another five minutes. 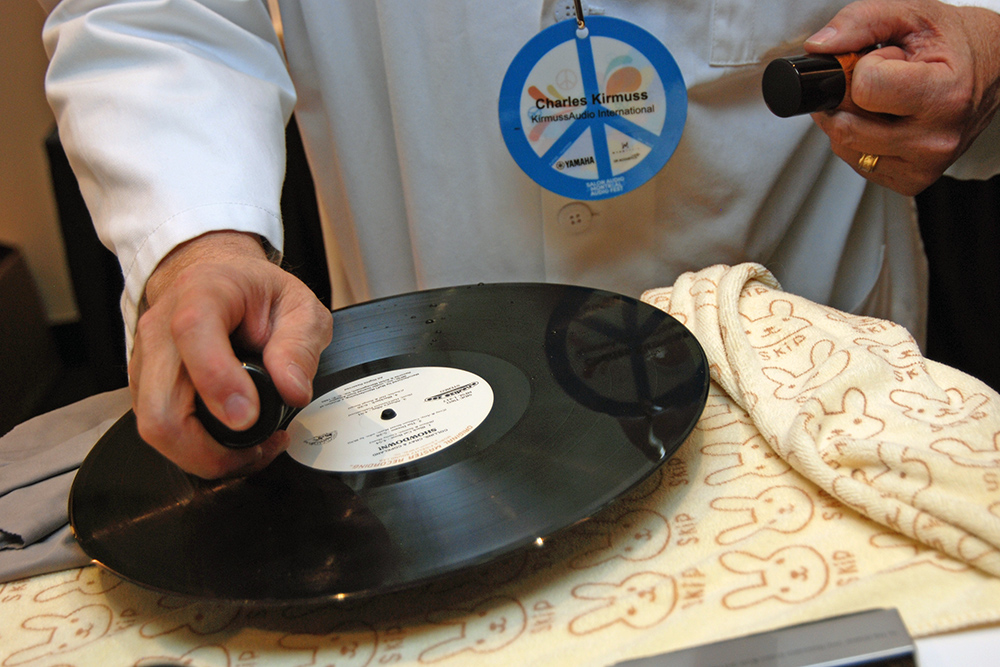 That done, Dr. Kirmuss pulled the record out and attacked it again with the surfactant and brush. “Not clean yet,” he proclaimed, so back in for another five minutes. And once more, for a total of three scrubbings and about 17 minutes in the bath. The process took, in total, nearly a half hour. Used to my one-minute-per-side VPI Cyclone go-round, I found myself feeling that this was somewhat excessive.

After the last wash cycle, Dr. Kirmuss polished the record with a microfiber cloth and slipped it into a clean sleeve. Off I trotted back to the Monitor Audio-Roksan room.

Brown and I examined the record -- it looked brand new. Glossy, clean, and basically perfect. We slammed it back on the Xerxes 20 and the record was dead silent. Zero ticks or pops, no more skips, and now there was top end -- the highs returned, Albert Collins’s Telecaster regained that nasty attack, those biting overtones. I could hear the extension, spaciousness, and textural definition that I knew the Shiraz could extract out of a record’s grooves. 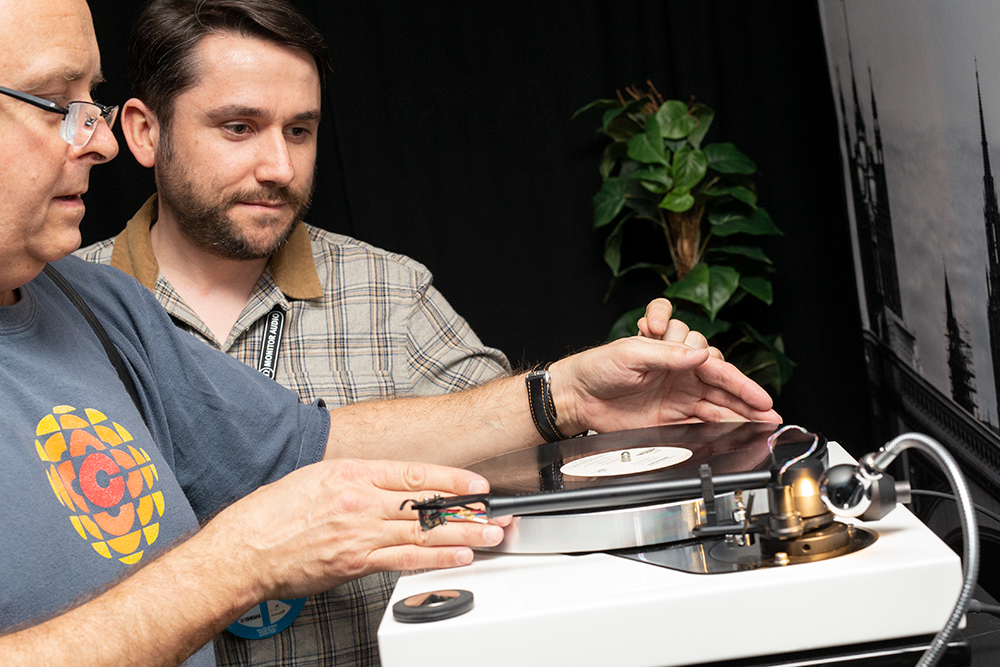 So I’m certainly comfortable proclaiming that the Kirmuss Audio record-cleaning regimen is effective. This looked and sounded like one seriously clean record. I can certainly see this extended cleaning process being worthwhile for important records, but it’s a long, involved megillah, and not one to which I can see myself having the patience to adhere. I have too many other hobbies that demand my time to be able to devote the level of focus needed to make owning a KA-RC-1 a value-oriented proposition.

That said, a part of me wishes I could treat any number of my important records to this thorough, well-thought-out procedure. Maybe when I retire . . .