The Montreal Audio Fest is three short months after CES, so product debuts here are rather rare. But the Canadian audio scene is quite active, with many local fans and a fair scattering of Quebec- and Ontario-based companies. So it wasn’t surprising that a good number of the new products we could find were from north the border. (All prices in Canadian dollars.) 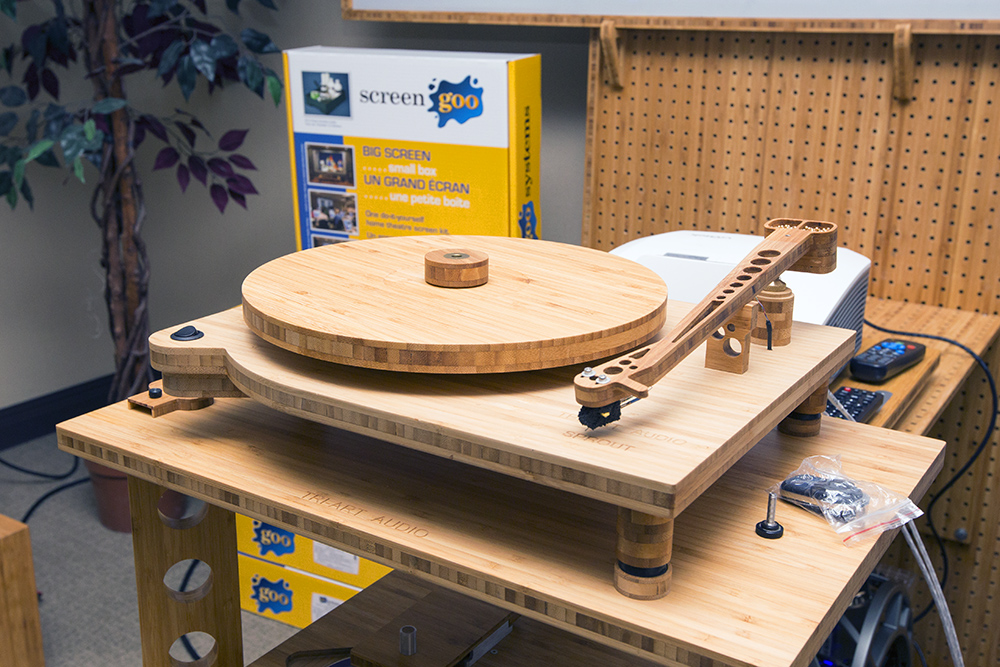 It’s a grotto of bamboo worship inside each of the three Tri-Art Audio rooms. Tri-Art is a Canadian manufacturer based in Kingston, Ontario. Bamboo speakers, electronics, turntables, accessories -- bamboo everything! And it’s always productive to stop by and visit, as there are generally at least a couple of new products we can feature. Of particular note this year was the new Sprout turntable, which comes with a (bamboo) arm and Audio-Technica AT95E cartridge, all for the very reasonable price of $725. 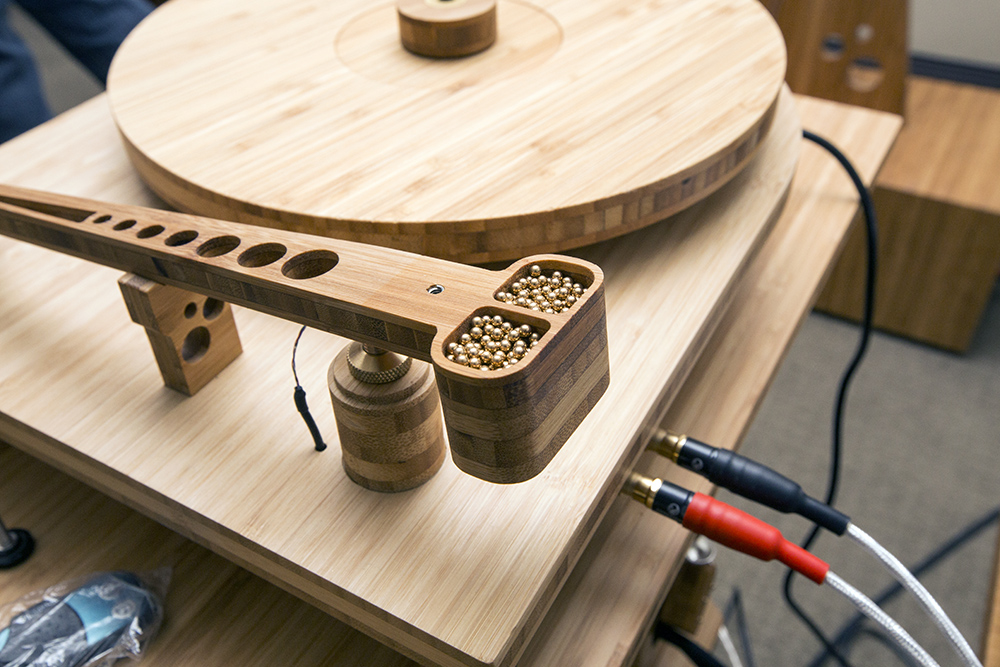 Aside from the fact that it’s made of bamboo, the niftiest thing about the Sprout is the tonearm’s counterweight. It’s composed of two hollow cups into which you can pour bronze BBs. Think of the benefits here! You can add BBs one at a time without moving the tonearm back to the rest. Can’t do that with a conventional counterweight. And you can easily adjust azimuth by moving a few BBs from one side to the other. It’s brilliant! 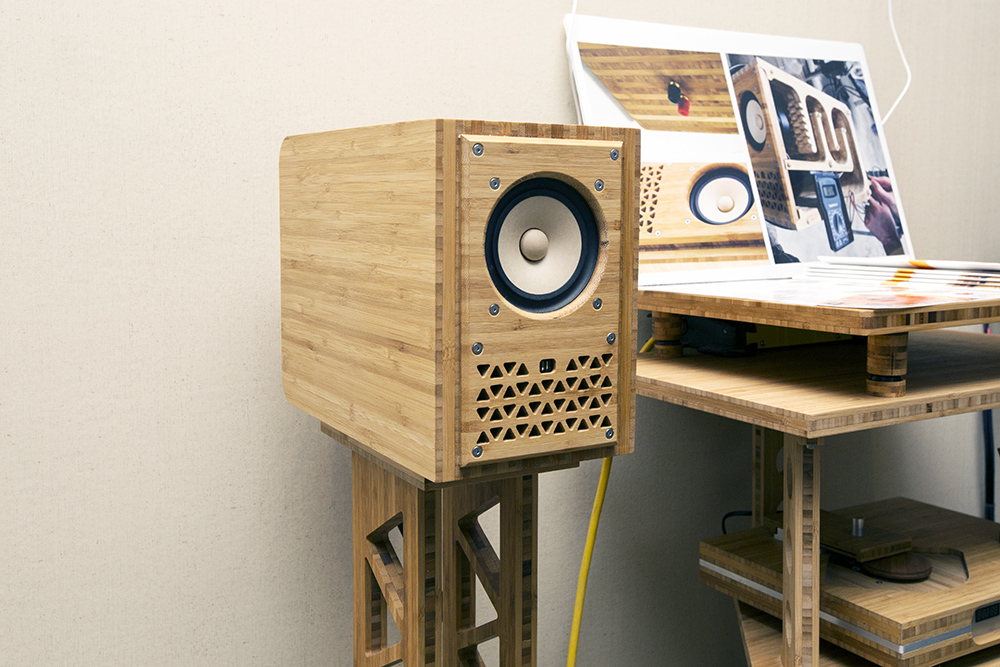 Tri-Art Audio was also debuting the Pebbles Mini speaker, which is heroically constructed from CNC’d (bamboo) layers into a true transmission-line design. You cannot see it in the picture, but a cutaway of the Mini that I saw revealed a complex internal structure. It’s small, but the Mini appears to be a lot of speaker for $1100/pair. 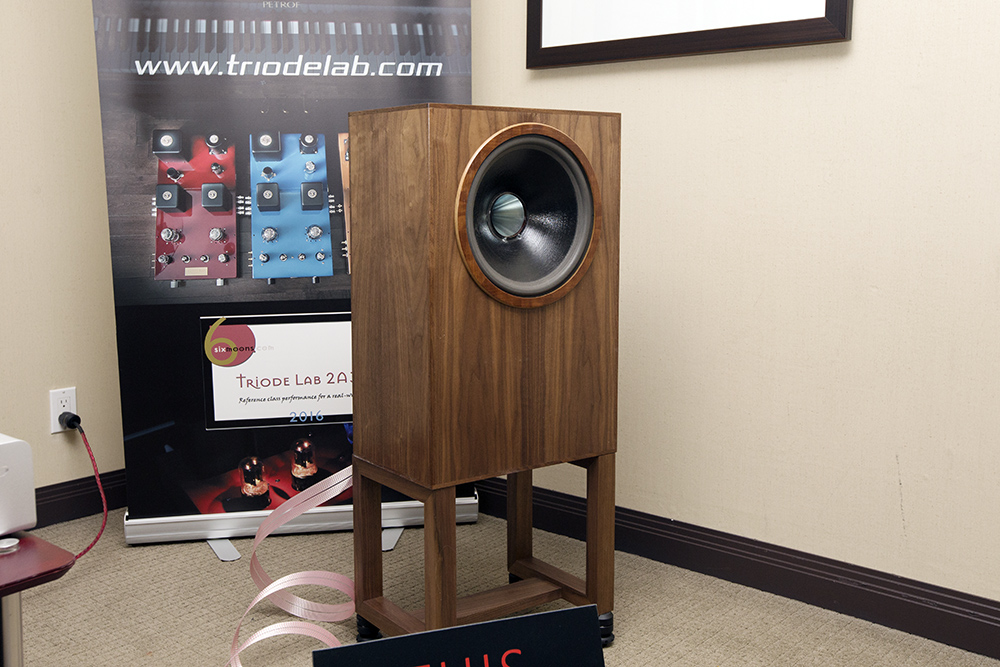 Based in Stoney Creek, Ontario, Coherent Audio had on hand its new Model 12 GR, a 96dB coaxial design clad in a lovely walnut veneer. The Model 12 GR sounds significantly more expensive than its $3600/pair price would suggest, and seems like a very good value. 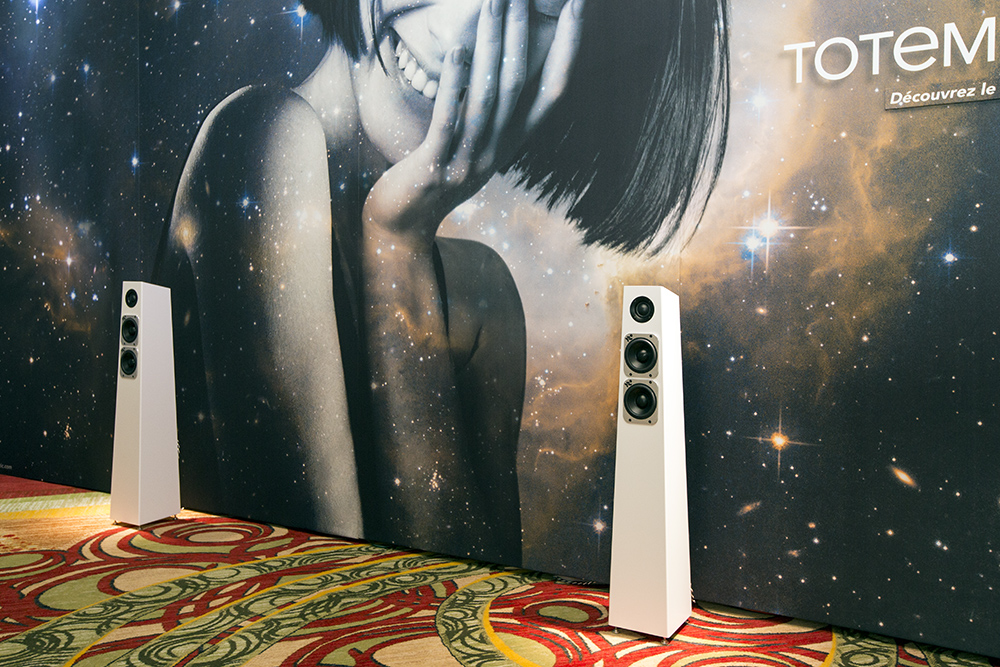 Looking slim and elegant in its milk-white satin-acrylic finish, the Totem Tribe Tower speaker is a brand-spanking-new product from Totem Acoustic. With two of the company’s smallest Torrent bass-midrange drivers and one tweeter, the Tribe Tower is said to reach up to 30kHz and down to an incredible 30Hz. Given the fact that the speakers were filling a very large room at decent volume levels, we’re inclined to believe the claim about low-frequency extension. The Tribe Tower retails for between $5000 and $6000 per pair, depending on finish. 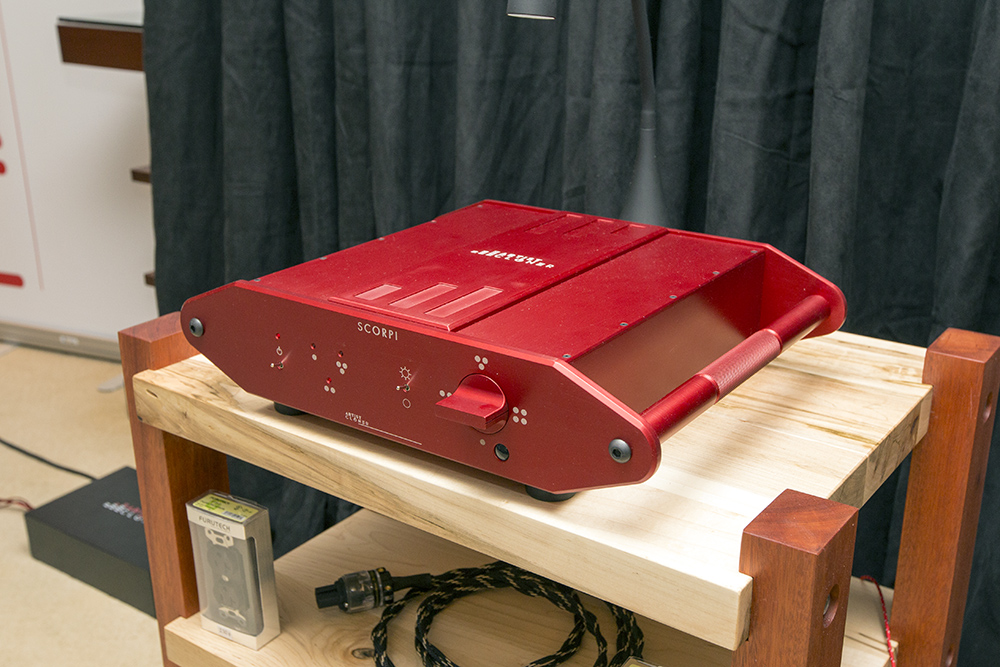 Artist Cloner (yes, that’s its real name), a Montreal-based company, was showing its new Scorpi integrated amplifier ($5999), which was anodized a fiery red. The Scorpi is rated at 50Wpc into 8 ohms, and it’s said to double down to 100wpc into 4 ohms. 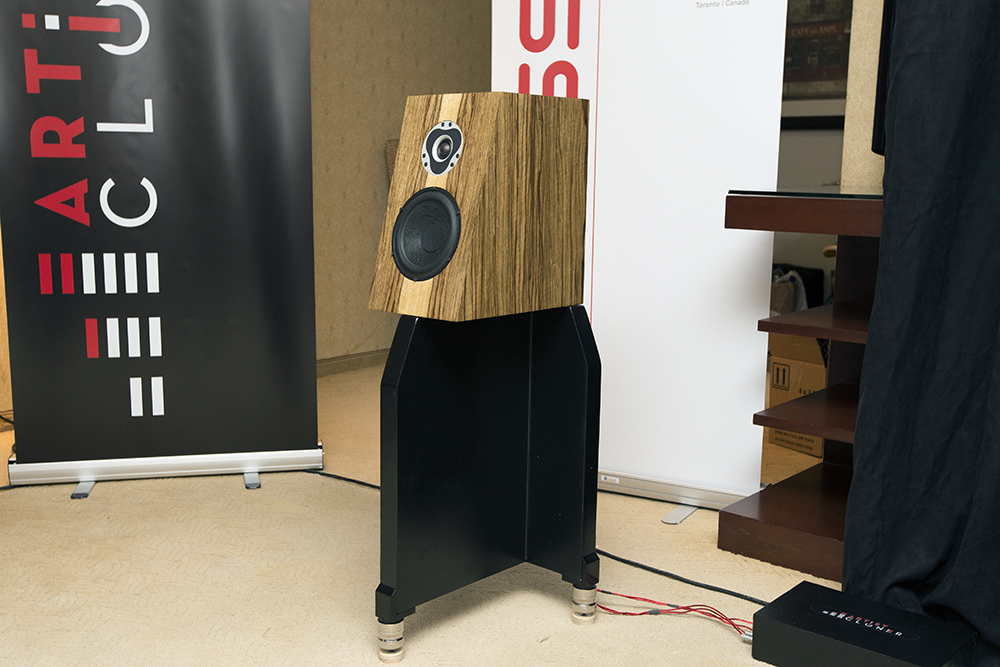 Also new for the show from Artist Cloner was its Rebel speaker, a stand-mounted two-way that retails for between $5999 and $7999 per pair depending on choice of finish and capacitors. 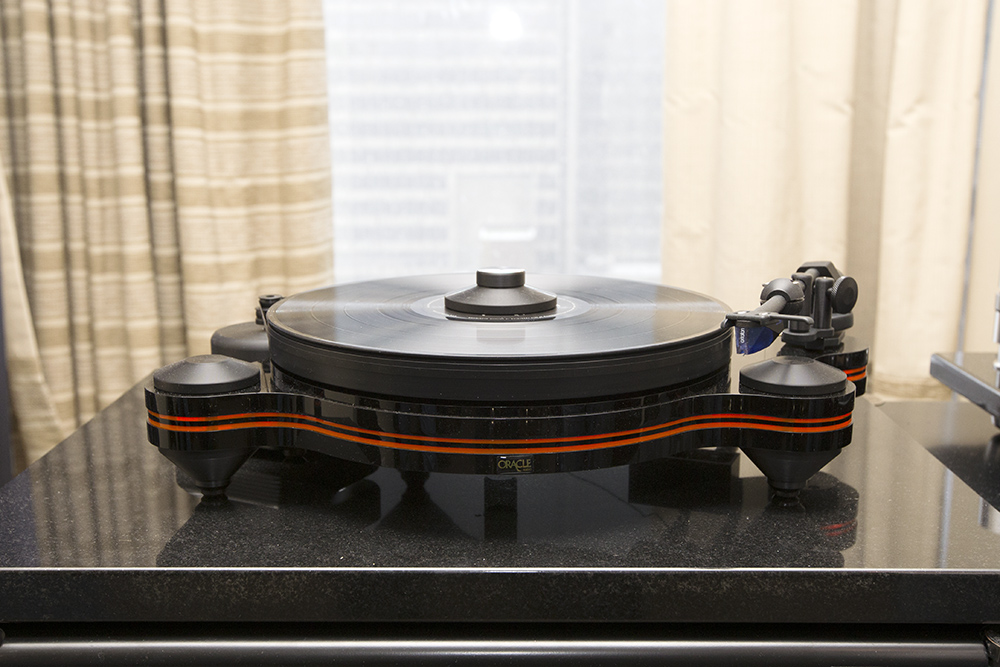 Audio isn’t fun enough. It’s stodgy and boring. Why can’t we have equipment that -- oh, I don’t know -- lights up? Oracle heard that plea, and it has an answer. The company’s new Origine turntable is made from two layers of black acrylic, but sandwiched between those two layers is a thin slice of translucent acrylic. In the Oracle room a small LED light behind the ’table provided sufficient light to make the entire perimeter glow a rich red. I was delighted, giggling like a little boy. The Origine retails for $2500 including a unipivot arm, and . . . 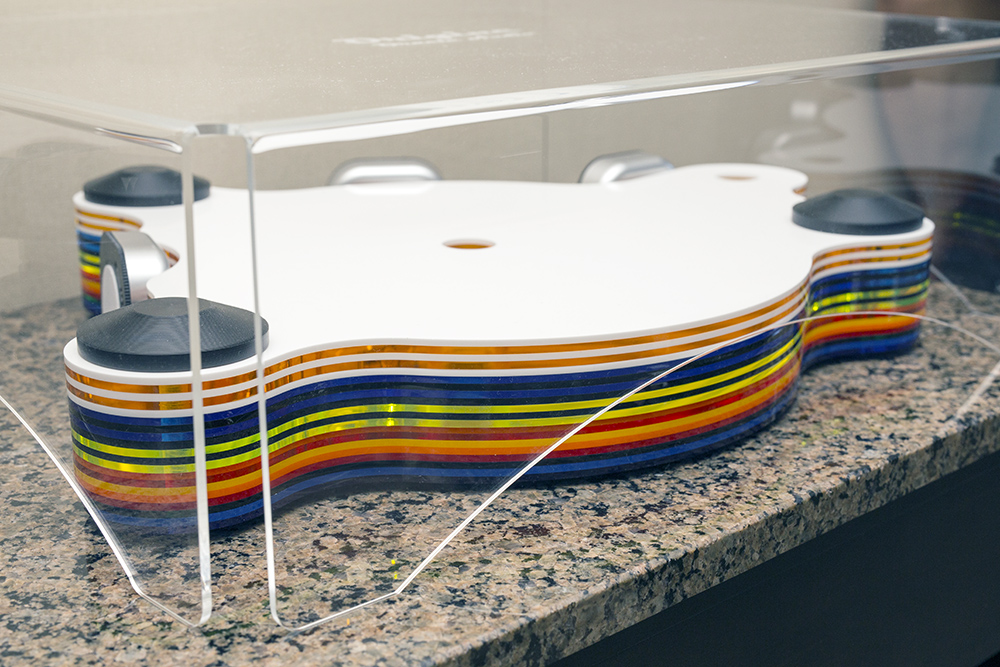