This is the second and final installment on electronics at the Audio Video Show (AVS) 2016. Featured are those products that are new or were most interesting to me. Unlike the other write-ups from this show that I’ve already done, though, only one of the brands highlighted here is from Poland -- AVS is attracting exhibitors from all over the place. All prices in euros. 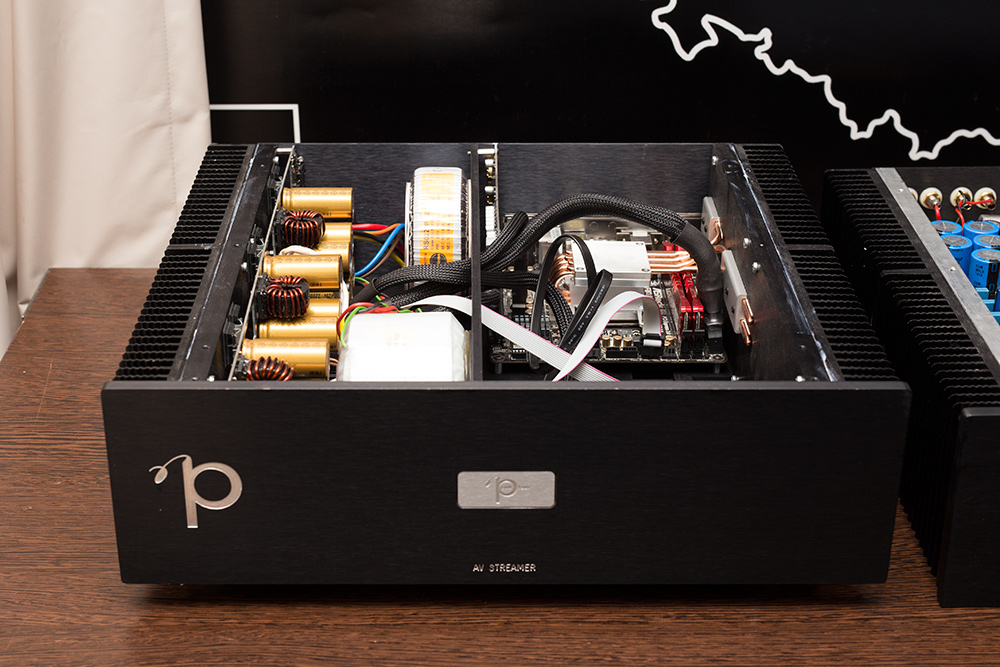 Pink Faun -- weird name, but cool products. The company is from the Netherlands, and they started out many years ago as do-it-yourselfers who created audio gear, probably for themselves and for their friends. Eventually, their reputations attracted a significant number of customers and they became a full-fledged manufacturer. While these two products are not brand new (they’re a couple of years old), we’ve never covered the brand before, and I thought they were so interesting that they needed to be shown in this report. First up is the 2.12 network streamer, priced starting at €4990. It’s intended to improve upon the two main problems that most computers have: noisy fans and poor-quality switch-mode power supplies. To combat these issues, Pink Faun . . . 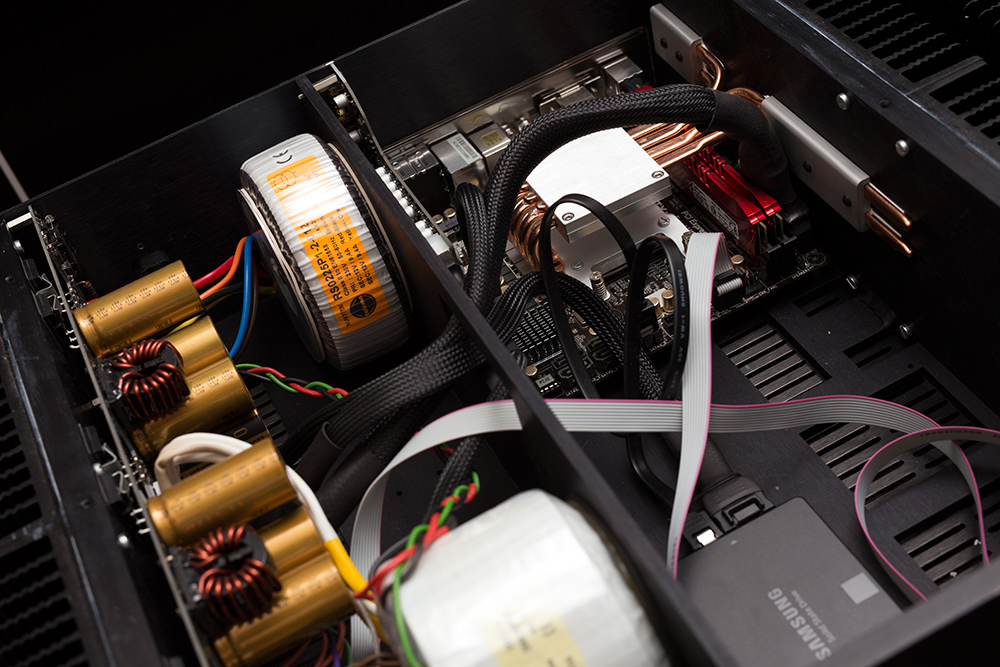 . . . used cooling pipes instead of a fan for the CPU and built its own high-quality linear power supply. You can add various upgrades to the base 2.12, such as improved clocks, for an additional cost. One particularly interesting feature is its I2S output, which, of course, you need to use with an I2S-compatible DAC. Not surprisingly . . . 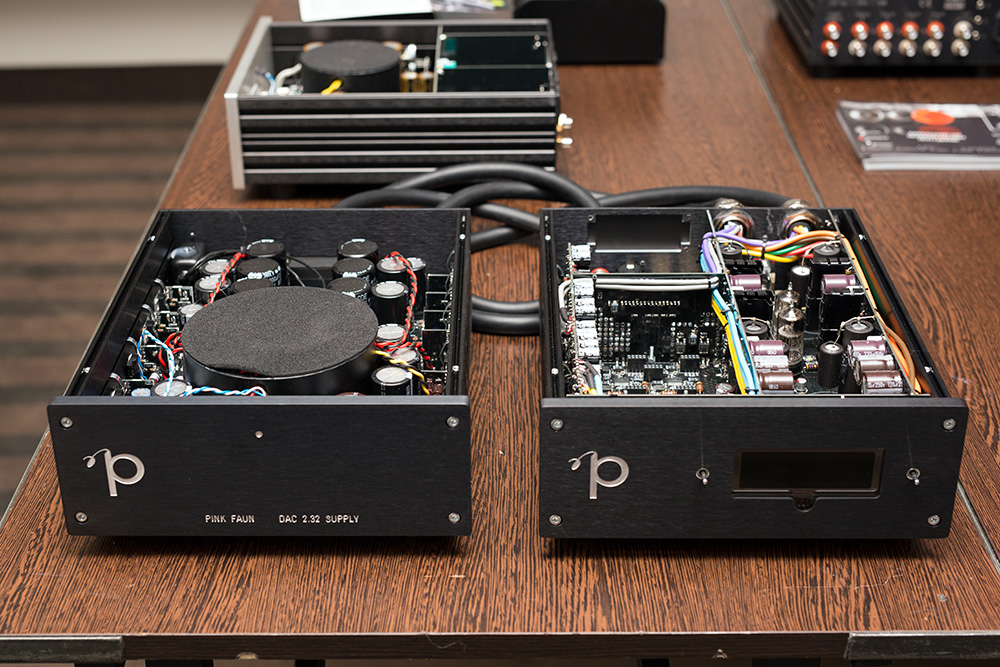 . . . Pink Faun offers a few models that have an I2S input. Its flagship, the DAC 2.32, starts at €3990 and has I2S, S/PDIF optical and coaxial, and AES/EBU digital inputs. It’s a 32-bit DAC with a separate power supply that, in its base form, uses four DAC chips per channel (for a total of eight), but can be upgraded to use 16 DAC chips per channel (so 32 in total). Combining the outputs of multiple DAC chips results in an averaging out of inherent errors unique to each one, which usually results in better noise and distortion performance. The 2.32 supports PCM and DSD, and can have its oversampling turned on or off at the flick of a switch (the company prefers no oversampling, but lets the customer decide). It also has a tubed output stage. As with the 2.12, other upgrade options for the 2.32 are available for an additional cost. 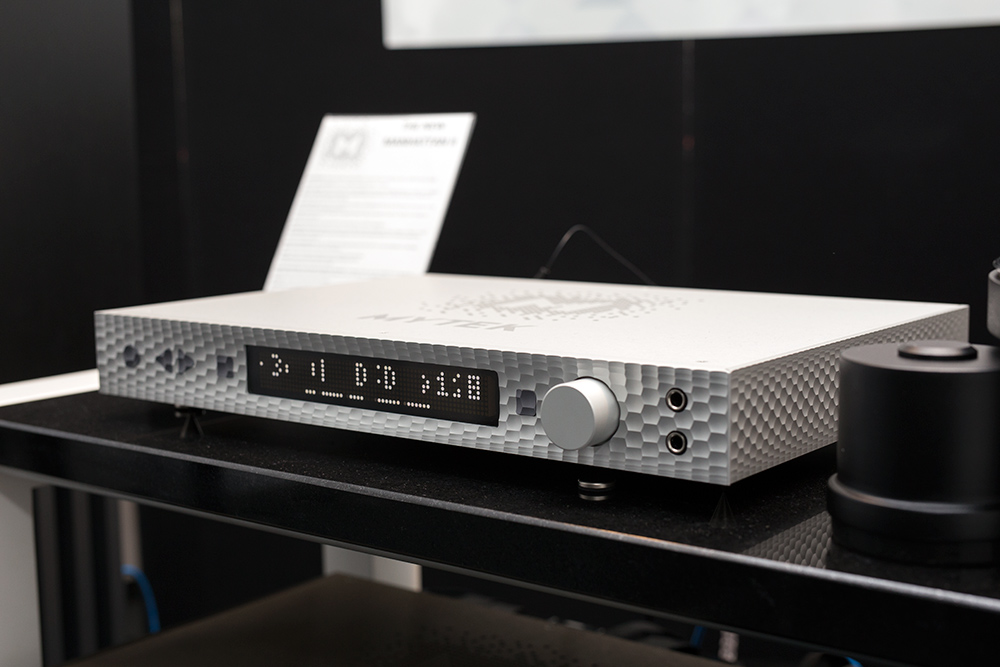 Leaving aside Meridian, Mytek was the first company to throw its hat into the ring with MQA processing by releasing the MQA-compatible Brooklyn DAC (MQA started out being a Meridian product, but now exists as an entity on its own). Now the Mytek company has gone a step further with the Manhattan II, its flagship, which supports PCM up to 32-bit/384kHz, native DSD up to DSD256, and of course MQA. On top of that, the Manhattan II has two headphone jacks, as well as a volume control, so it can function as a preamplifier. There’s even an optional MM/MC phono-stage card available, so you can run your turntable into it. Seemingly, the Manhattan II does it all -- with a price that starts at €5995. 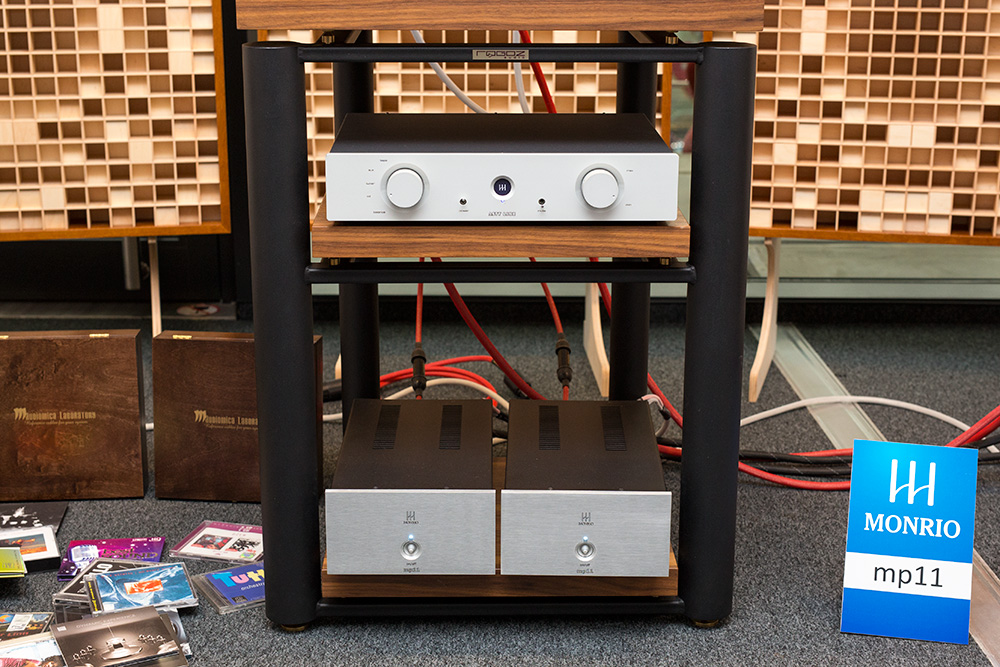 I had never heard of the Monrio brand before AVS 2016, but that’s more my fault than the brand’s -- apparently, this Italy-based company has been at it since 1991! At AVS 2016, the company showed four of its newest products. Insofar as separates go, there is the Asty Line preamplifier, which sells for €2050 and is equipped with a 6922/E88CC dual-triode tube. Its companion is the MP11 mono amplifier, which sells for €4000 per pair and is said to deliver up to 135W into 8 ohms. But if you don’t want separates . . . 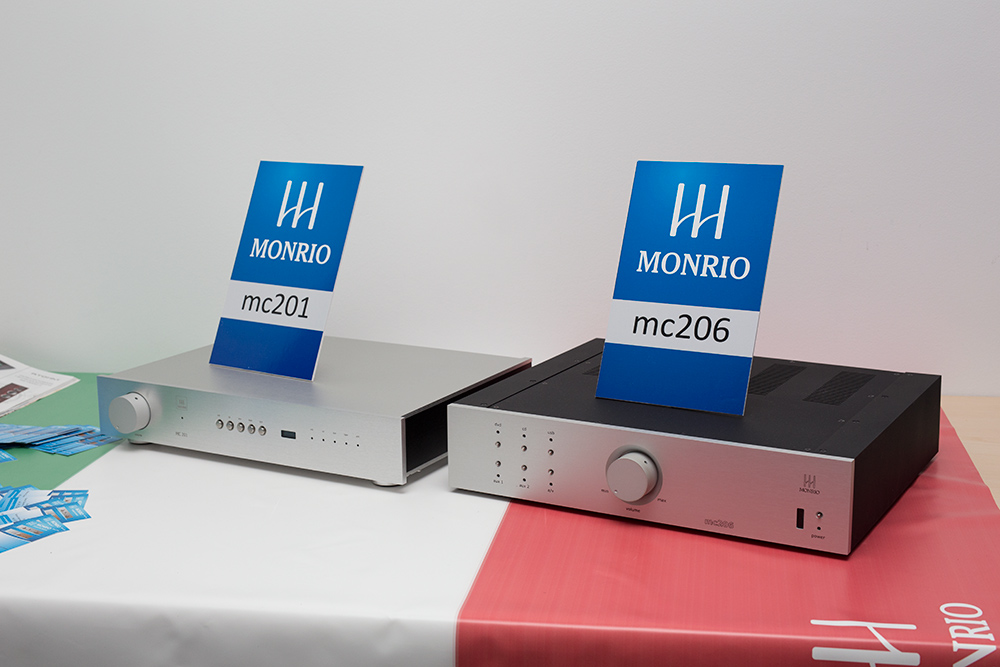 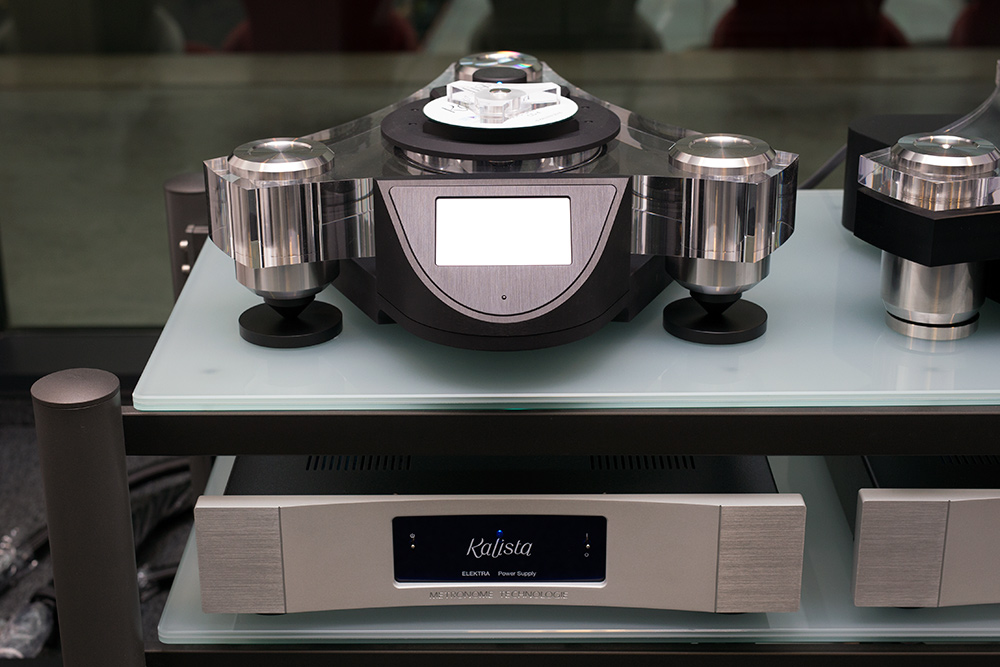 The folks at Metronome don’t like the term “CD transport” -- I know because I was told after I wrote it down. Instead, the France-based company likes to use “CD turntable” instead. With that introduction, enter the new Metronome Kalista DreamPlay CD turntable, complete with its own external power supply and with . . . 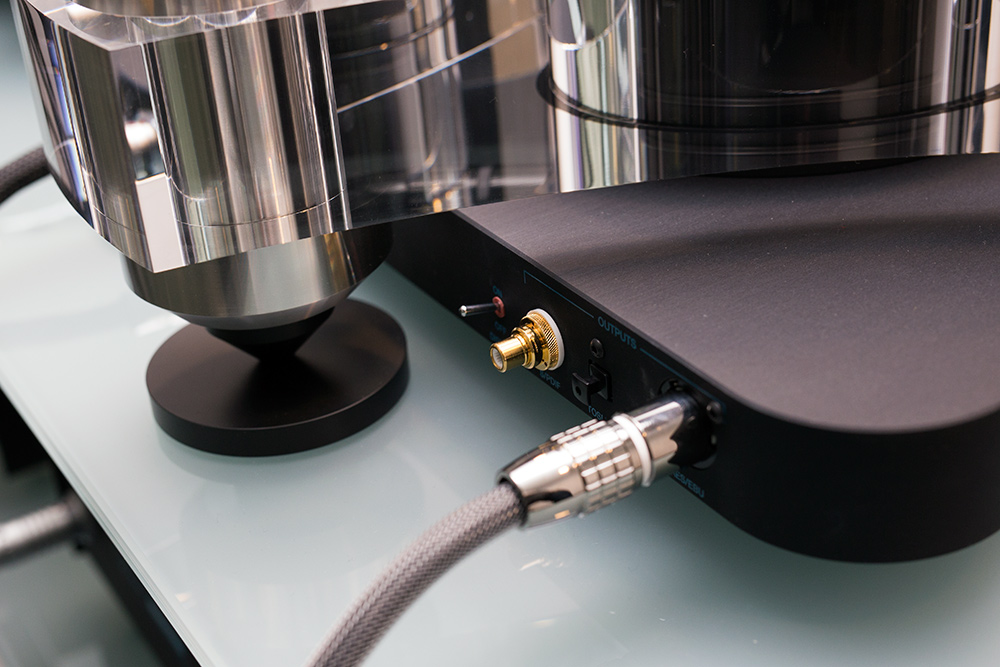 . . . optical, coaxial, and AES/EBU outputs. The Kalista DreamPlay made its world debut at AVS 2016 and is so new that there isn’t even a brochure for it; however, I was assured that the company is ready to ship it. What should be obvious from the pictures is that the Kalista Dreamplay is a stunning piece of industrial art. But to have this beautiful piece in your home, you’ll have to pay a substantial price: €34,000. 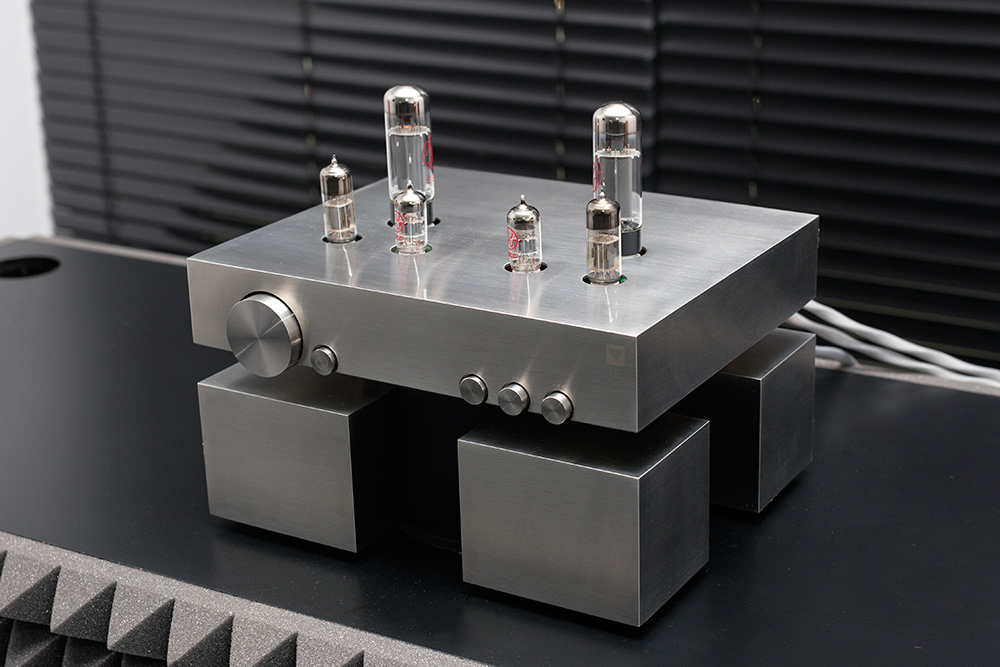 In my first write-up about electronics, I finished up with two super-low-powered tube-based integrated amplifiers: the Dimd PP10 and the Fezz Audio, rated at 10Wpc and 8Wpc, respectively. Dimd is from Latvia; Fezz is from Poland. So I’ll finish this final piece with the Block integrated amplifier from G-Lab. It provides even less power than either of those two, but it looks every bit as nice, if not nicer, than them. It sells for €5000. The Block has pairs of E34L, E88CC, and 6N6P tubes combined into a circuit that generates up to 5.5Wpc -- as a result, you’re going to need some seriously sensitive speakers for this one. Do you dare go that low in power output? You decide. Before I got to AVS 2016, I had no idea that European companies were so into creating low-powered tube amps.