I saw a number of new loudspeakers at the Audio Video Show (AVS) 2016, but I saw more electronics there, both on the tube and solid-state side. Some of these were from companies we’ve seen at other shows, but many were from companies we’ve never encountered before, which made the trip to AVS 2016 even more worthwhile. This article contains some of the most interesting electronics that I saw on the first day of the show, with all prices in euros. 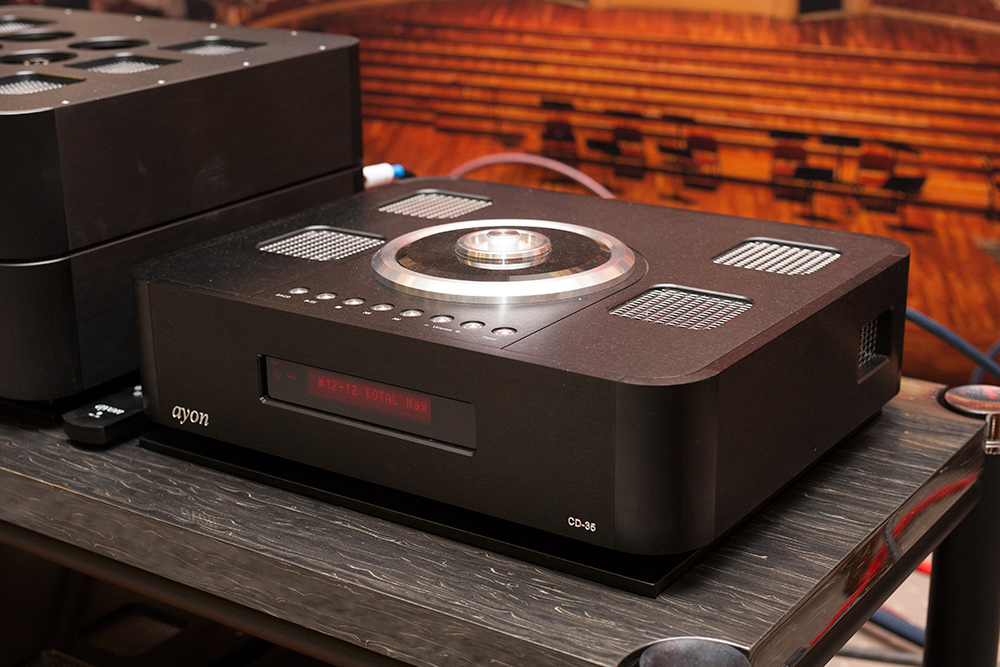 Because of the increase in computer-based audio and streaming, it’s rare to see any CD or SACD players introduced these days. But the folks at Ayon Audio, which is based in Austria, must believe there’s still a significant enough market for disc spinners. Priced starting at €7500, the base CD-35 can play CDs and SACD for those who still use discs, and it also features a plethora of digital inputs, so it can act like a DAC (it supports PCM and DSD). For additional cost, there are options for a preamp section and some improved parts. 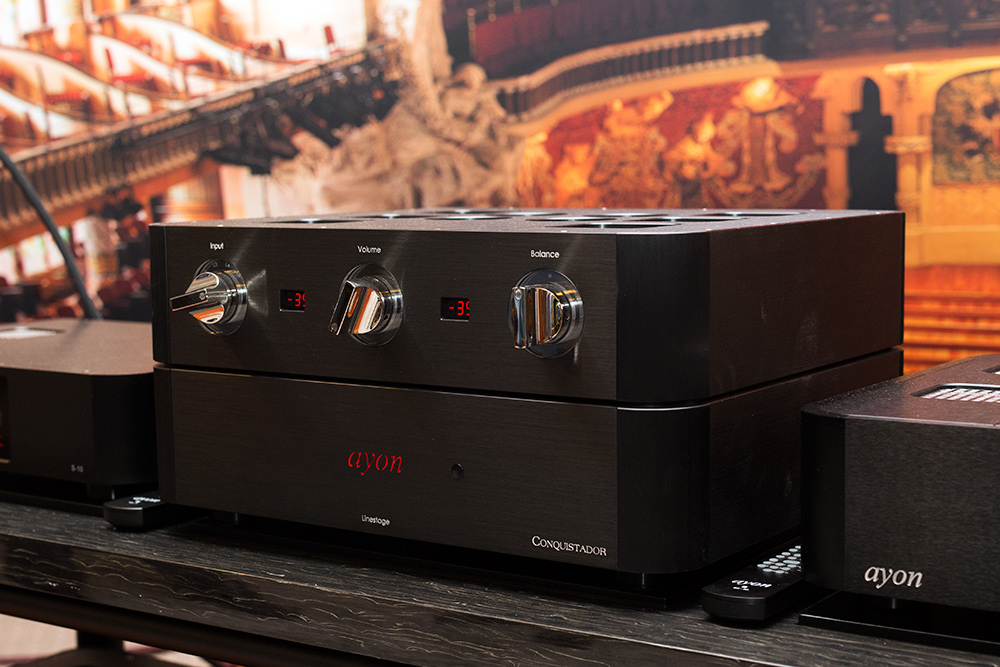 Ayon Audio also introduced the Conquistador, a two-box, statement-grade, tube-based preamplifier that sells for €55,000. While the photo above might appear that those are the two cases, one stacked on the other, it’s really only one -- the line around it is purely decorative. It actually needs all the height for the tall tubes inside. The second case . . . 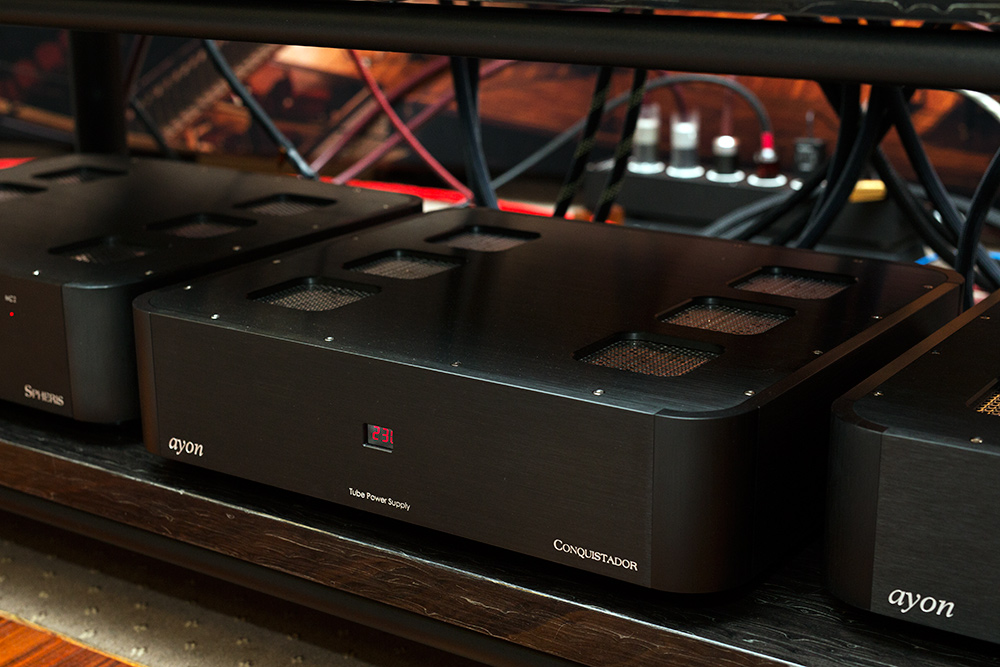 . . . contains the power-supply circuitry and is half the height. 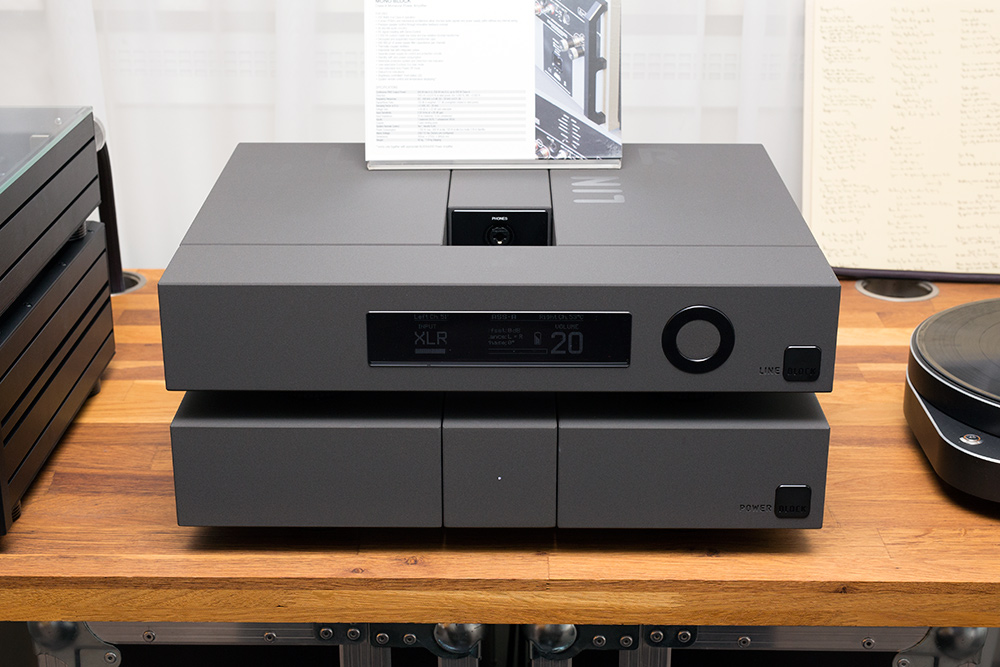 I’d never heard of Block Audio before I arrived at AVS 2016, but now that I’ve been introduced, I certainly won’t forget. Based in the Czech Republic, the company makes the two-box Line and Power Block preamplifier, which retails for €30,000 and uses battery power for all circuits. According to the company’s literature, users can expect 15 hours per battery charge. When the battery runs out, or when the preamp is turned off, it automatically starts charging again. The Line and Power Block were on display in gray, but they’re also available in black. While audiophiles should be concerned mostly about the sound, I will say that I really like the entire look of the Line and Power Block in the gray finish. Even more impressive to me because of the sheer size was . . . 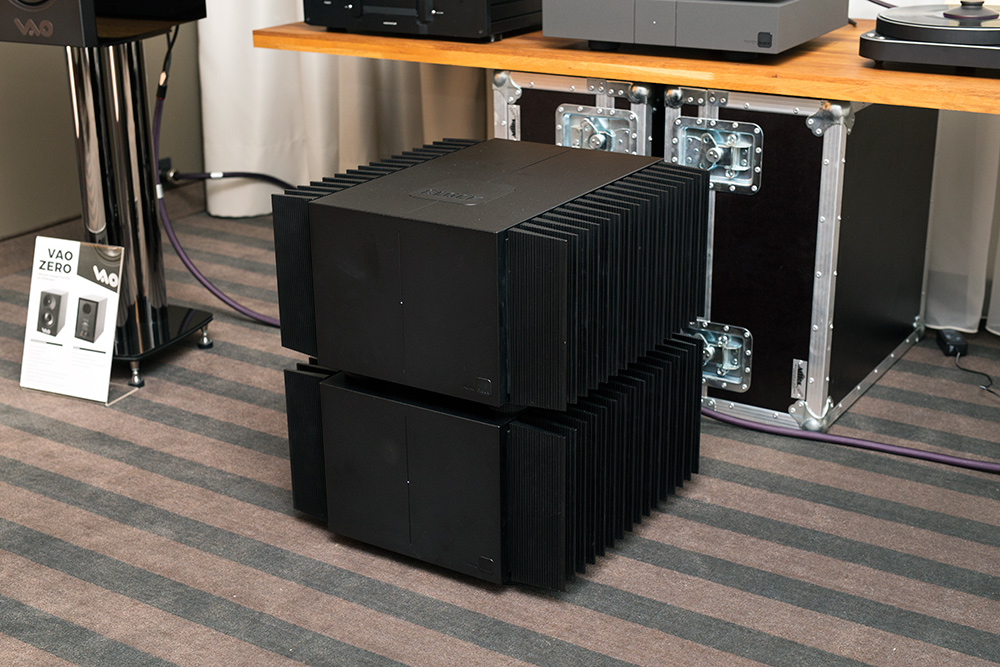 . . . the Mono Block mono amplifier, which retails for €40,000 per pair, and is also available in gray or black. The company claims it can provide 200W of pure class-A power into 8 ohms. When I asked whether they really needed a chassis that big (sometimes you see huge cases, but when you look inside, there’s almost nothing), the designer was thrilled to . . . 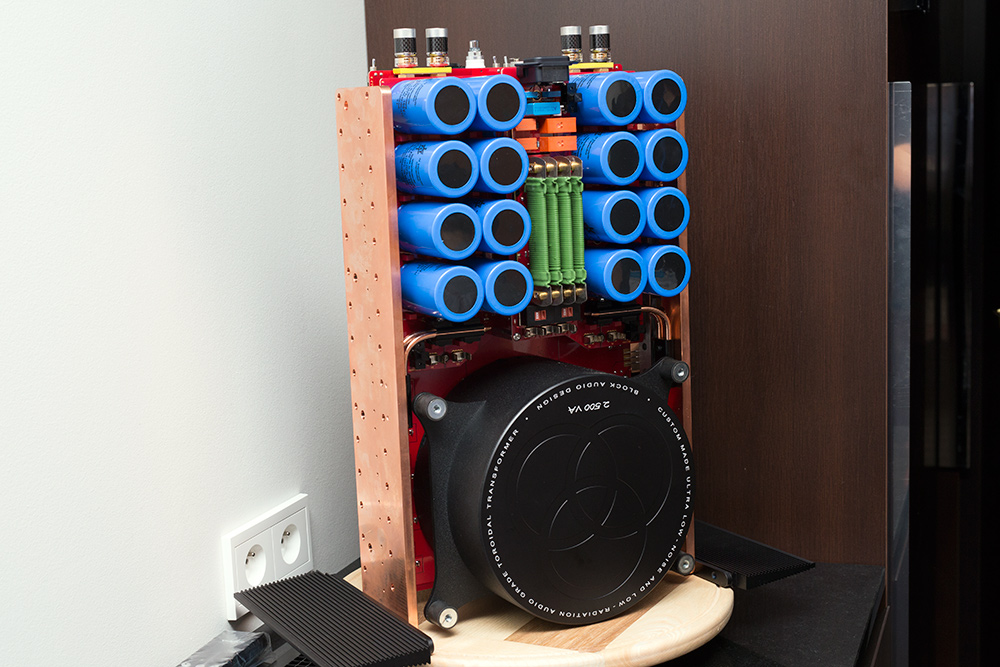 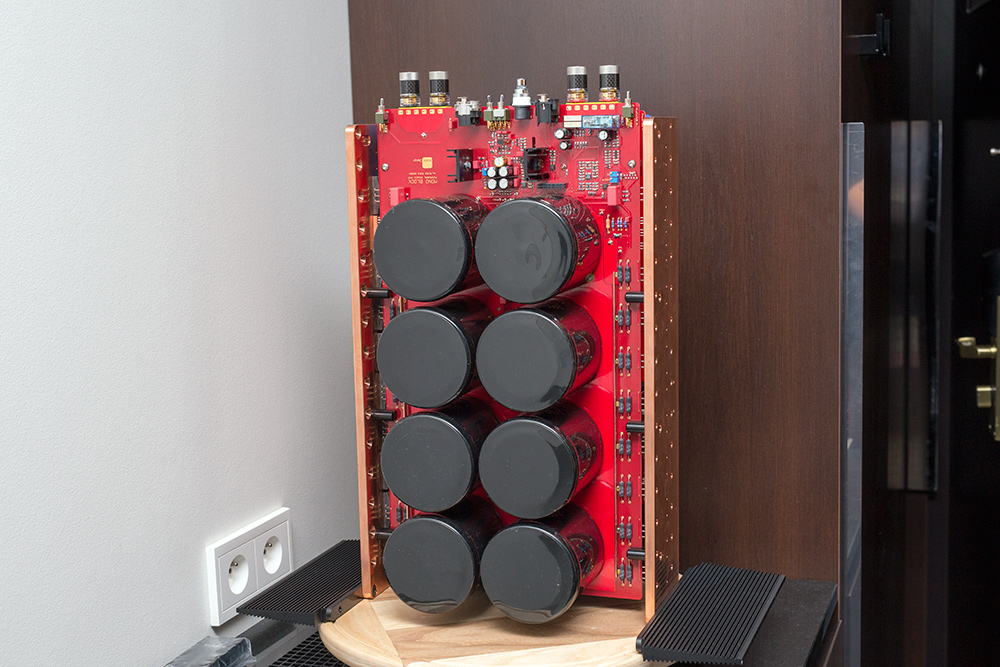 . . . both sides of the inside. Wow, that’s a lot of beef! (The literature says it uses a 2500VA transformer, and the power supply has 500,000μF of capacitance.) After I saw all the metal and the parts, I wasn’t surprised to learn that each Mono Block weighs a backbreaking 90kg (198lbs). 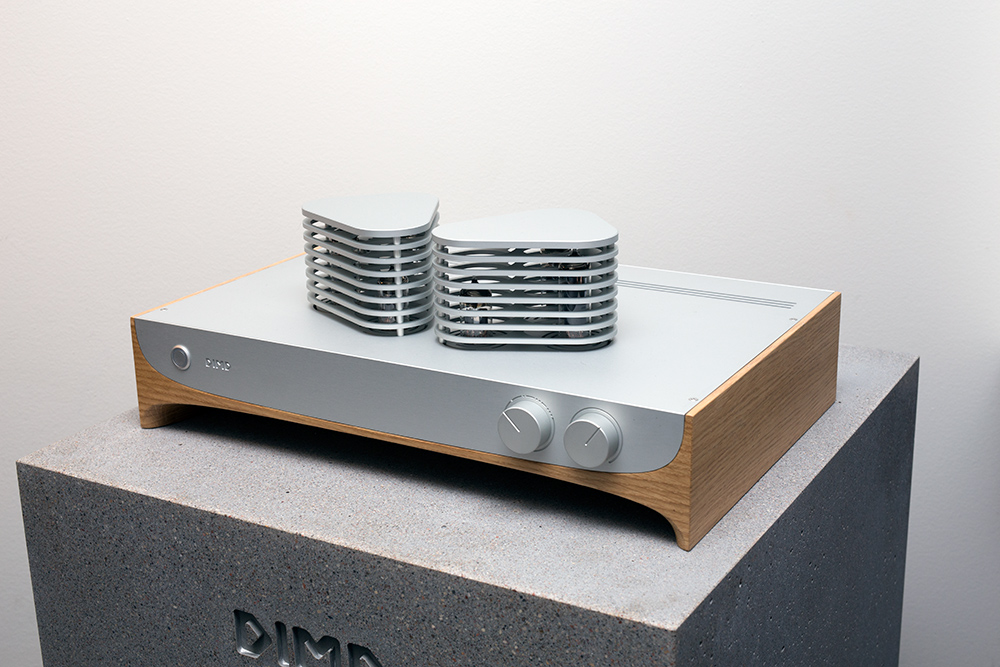 From very big to really small. After I saw the massive Mono Block amplifiers, I saw the diminutive PP10 integrated amplifier, which is from Dimd, a relatively new company based in Latvia. According to the company’s literature, Edgars Spārniņš, who has a PhD in physics and a passion for electronics, designed the PP10. For the design, he settled on a circuit that uses two ECC83 driver tubes and four EL84 output tubes to produce up to 10Wpc. That doesn’t sound like much power (and really, it isn’t), but it can be enough to produce sound at an ample volume level in a modest-sized room, providing the speakers paired with it are sensitive enough. I quite liked what I heard in the room, and I really like the aesthetics of the design. The PP10 is available through the company’s website for €3250. 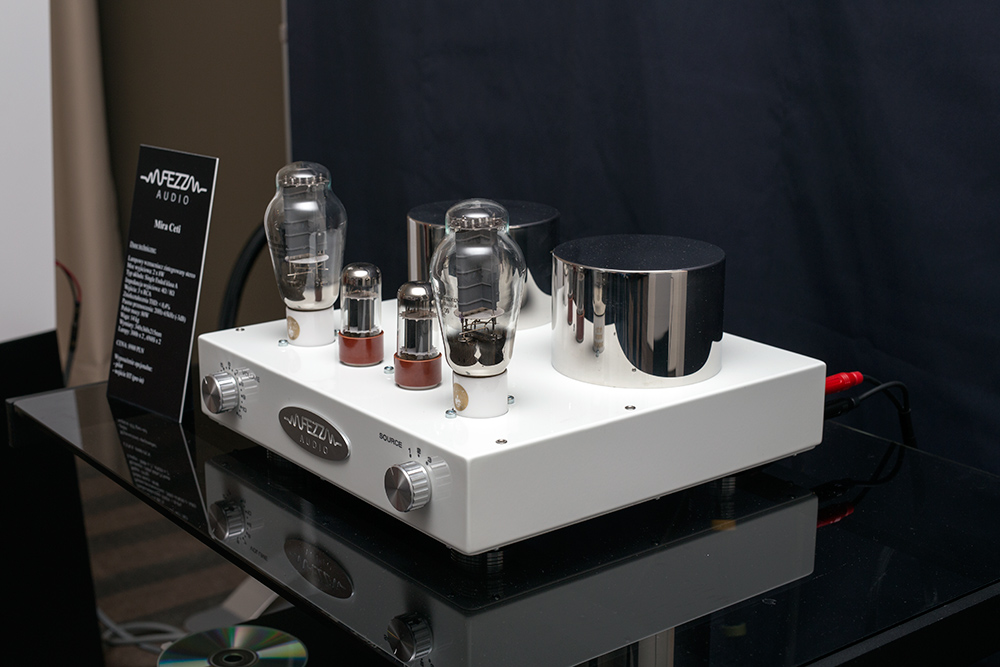 Right after I looked at the Dimd PP10, I saw another small, low-powered, attractive integrated amplifier: the Mira Ceti, priced at €2350. It comes from Fezz Audio, which is based in Poland. The Mira Ceti uses two 6N8S driver tubes and two 300B output tubes to deliver a whopping 8Wpc. Again, not much power, but in certain instances, it could work well enough. For those who can’t live with output power that low but are intrigued by the brand, Fezz Audio also makes the Silver Luna and Silver Luna Prestige integrateds, which use EL34 output tubes and can deliver 35Wpc. They also offer the Silver Luna II and Silver Luna II Prestige integrateds, which also use EL34s, but are rated for 32Wpc. Most surprising to me was how well their electronics appeared to be built, despite the company being around for only a couple of years. Obviously, they have their manufacturing down. I have a feeling this company may be destined for great things in the world of tubed electronics.