Even though I have covered hi-fi shows around the world for more than 20 years and thought I had seen it all, when I finished gathering the information on this next series of speakers, I realized that I hadn’t heard of one of the brands before I came to Audio Video Show (AVS) 2016. So it goes with this unique hi-fi show, which is held in Warsaw, Poland -- you can see plenty of well-known products, but you can also find just as many that you’ve never heard of. Here is the second and final batch of speakers, priced in currencies as diverse as their designs: euros, British pounds, and Polish zlotys. 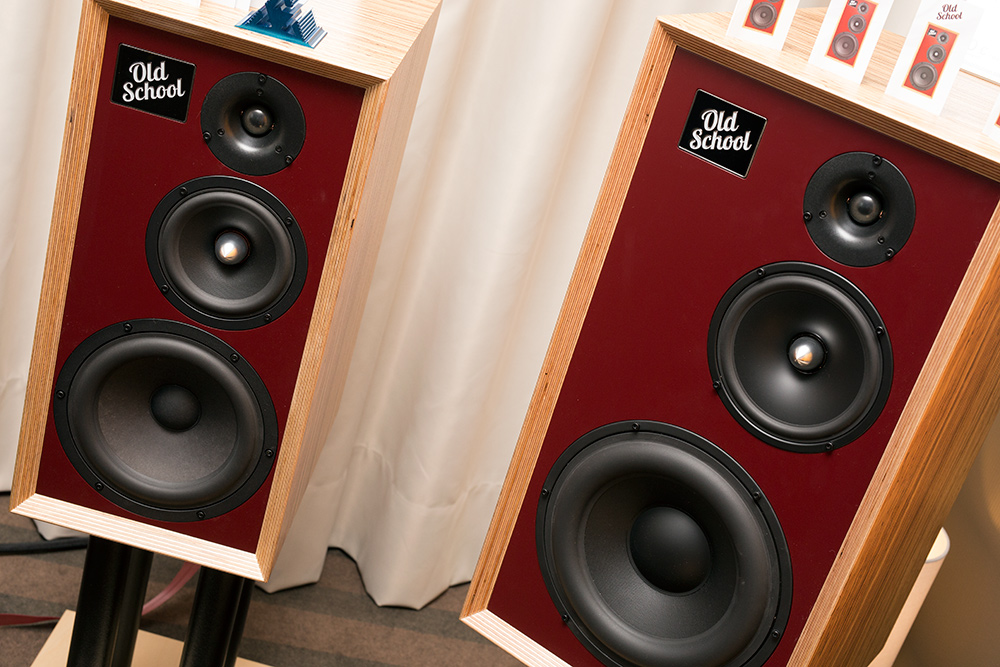 The Old School speakers caught my eye -- in a good way. I am a sucker for retro-type styling. But even though the looks of Old School’s speakers are taken from decades ago, the drivers, crossover parts, and construction techniques are said to be thoroughly up to date. Old School is based in Latvia and has three speaker models: the three-way Studio Monitor M2 (€2490 per pair), the three-way Classic One (€2790 per pair), and . . . 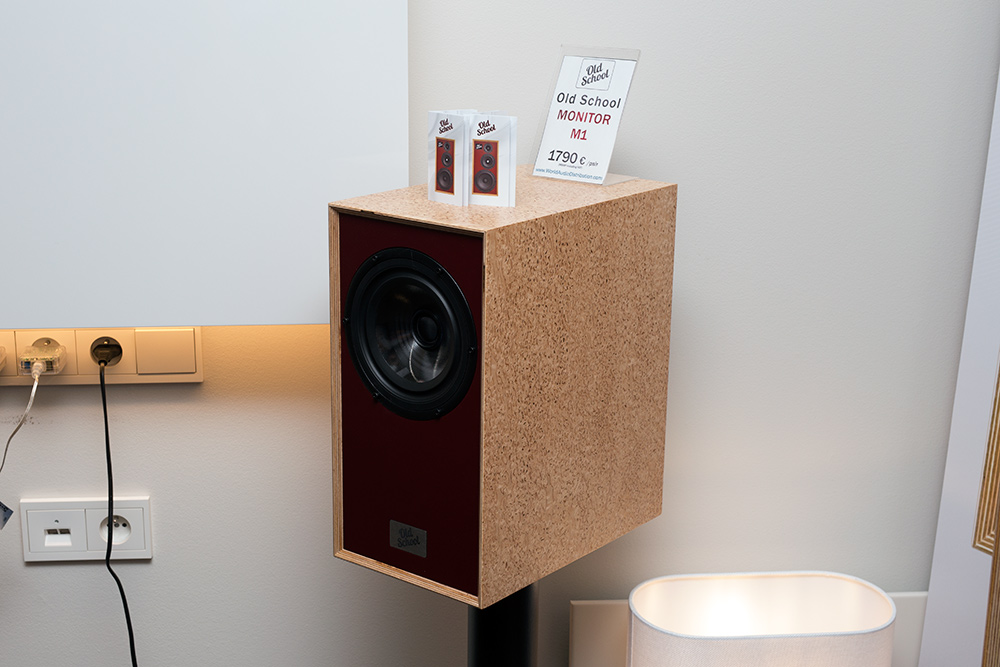 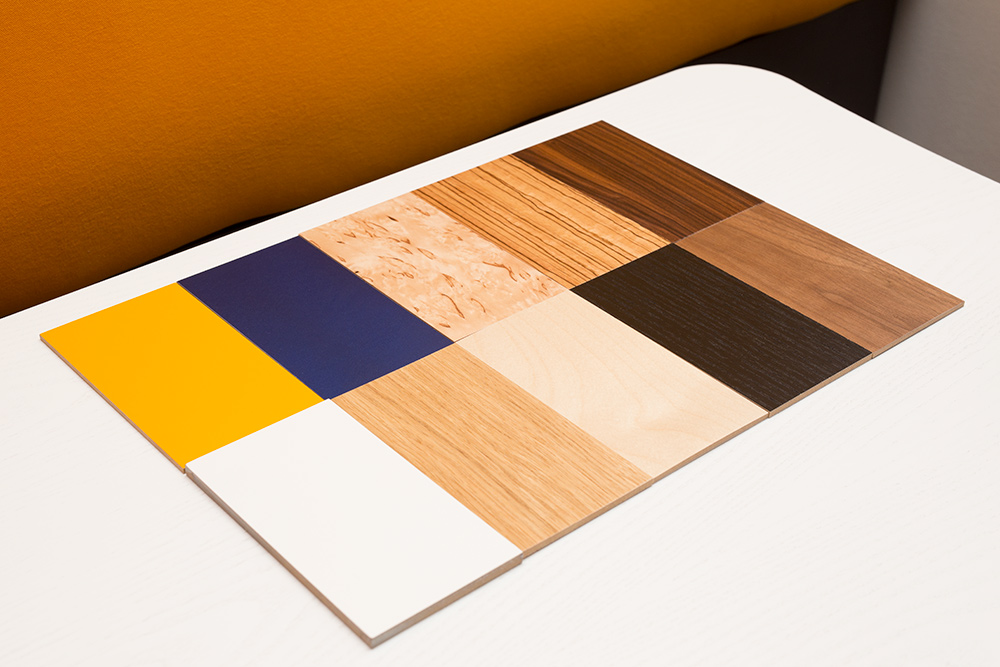 . . . numerous other finish options available for all the models. 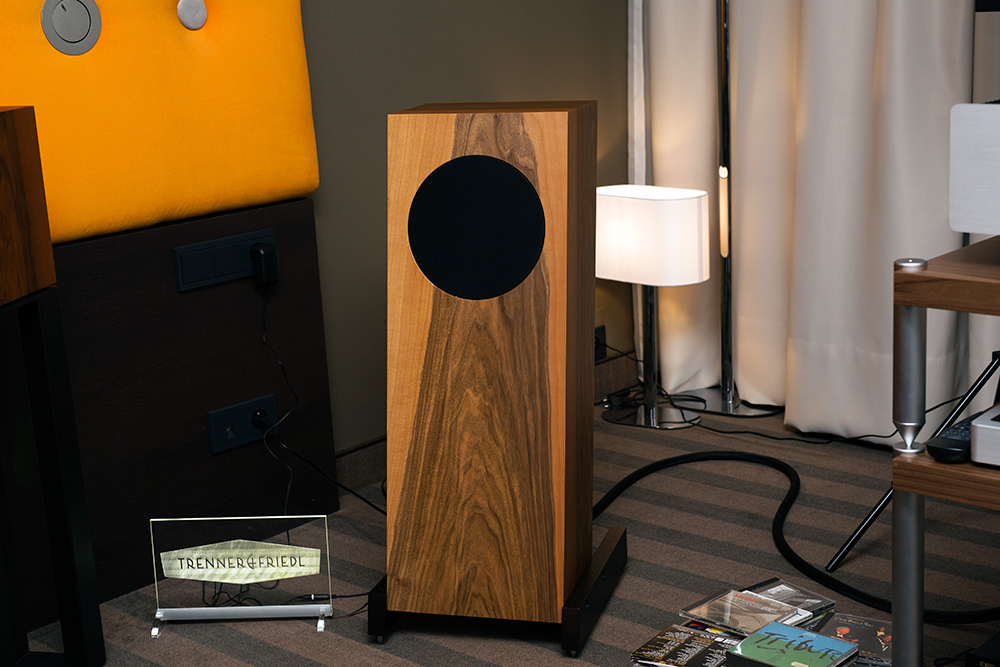 The Osiris loudspeaker comes from Trenner & Friedl, which is located in Austria. Like Old School’s M1, it also uses a coaxial driver -- but it has a 6.5” paper-cone woofer with an oil lacquer coating and a 1” horn-loaded tweeter. The Osiris’s claimed frequency response is 38Hz (-6dB) to 30kHz (-3dB), which brings it reasonably close to being full range. The sensitivity is said to be 88.7dB (2.83V/m) and the impedance is rated at 8 ohms, so it should be easy for any amplifier to drive. The Osiris sells for €5900 per pair. 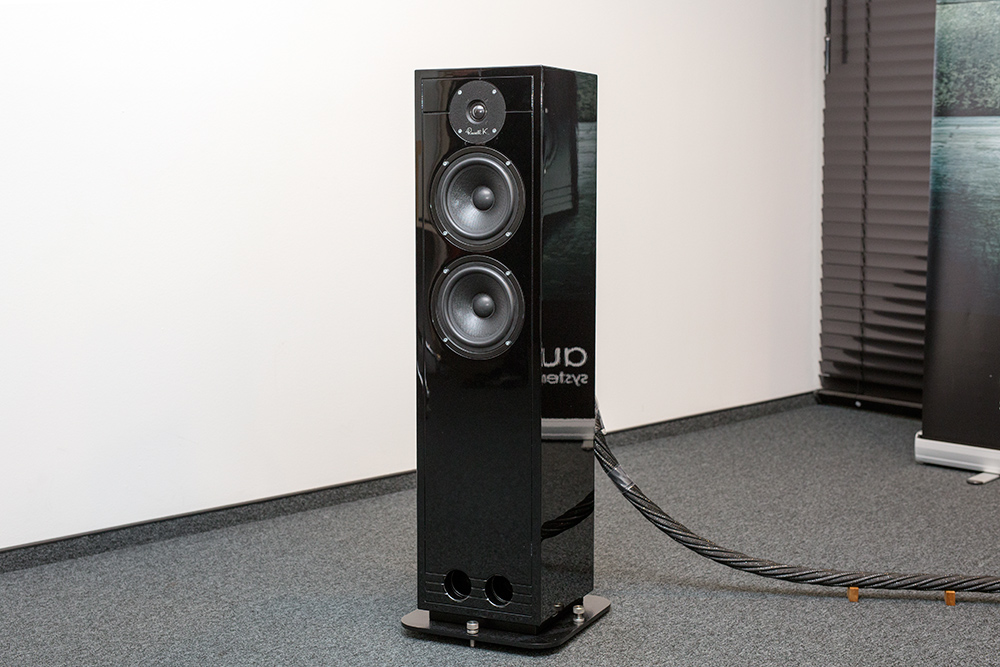 Russell Kauffman is a name that might be familiar to you if you’ve heard about the Fat Lady loudspeaker, which he designed for Morel -- it was a speaker with a shape as interesting as its name. Now with his own company, called Russell K., his mandate, according to his website, is to create loudspeakers that “sound like the real thing at affordable prices.” The company is based in the United Kingdom and manufactures the speakers in Poland, including the drive units. The biggest model his company makes is the Red 150, a two-and-a-half-way design that has a 1” tweeter, two 6.5” midrange-woofers, and no damping inside the cabinet, something Kauffman contends results in better sound. Its price is £4000 per pair. 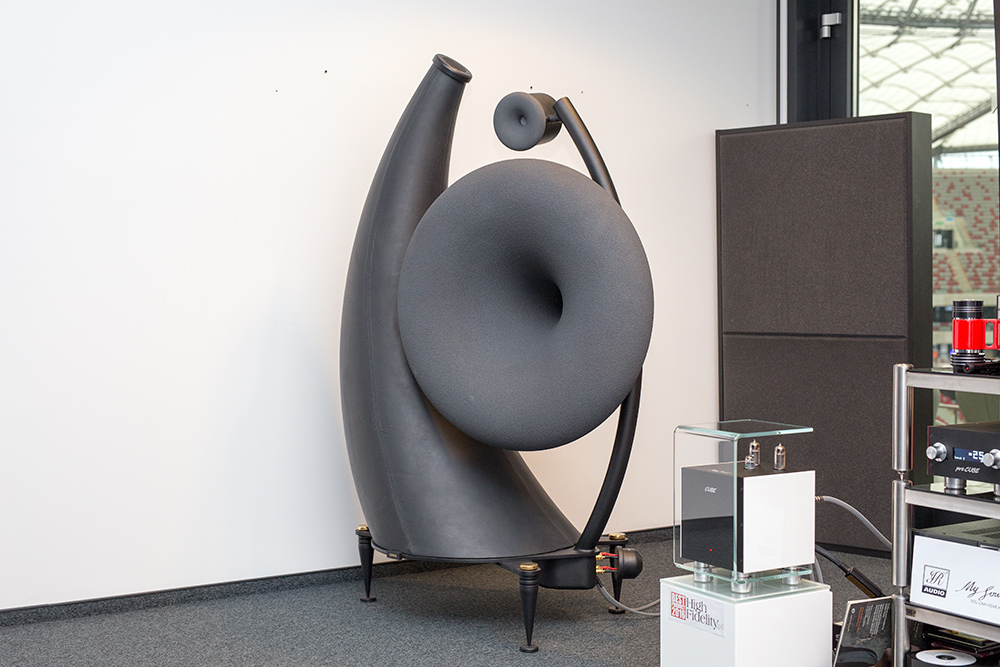 Horns is the brand behind the Universum, a horn-based loudspeaker that appears as ambitious as its name implies (in Polish, Universum means “the universe”). The Universum originally debuted in 2010, but it’s been revised four times since -- to the version in the photo above. Priced at €25,000 per pair, the Universum has a 1” beryllium-dome tweeter and a 2” beryllium-dome midrange, which are both horn loaded. Both of these horns are finished with a textured paint. For the bass section it uses a 15” woofer mounted at the mouth of yet another horn, which is wrapped in leather and has a port at its throat. All in all, it is an enormous, uniquely shaped transducer that weighs 100kg and is said to have a sensitivity of 100dB, an impedance of 8 ohms, and a frequency response from 30 to 23,000Hz. 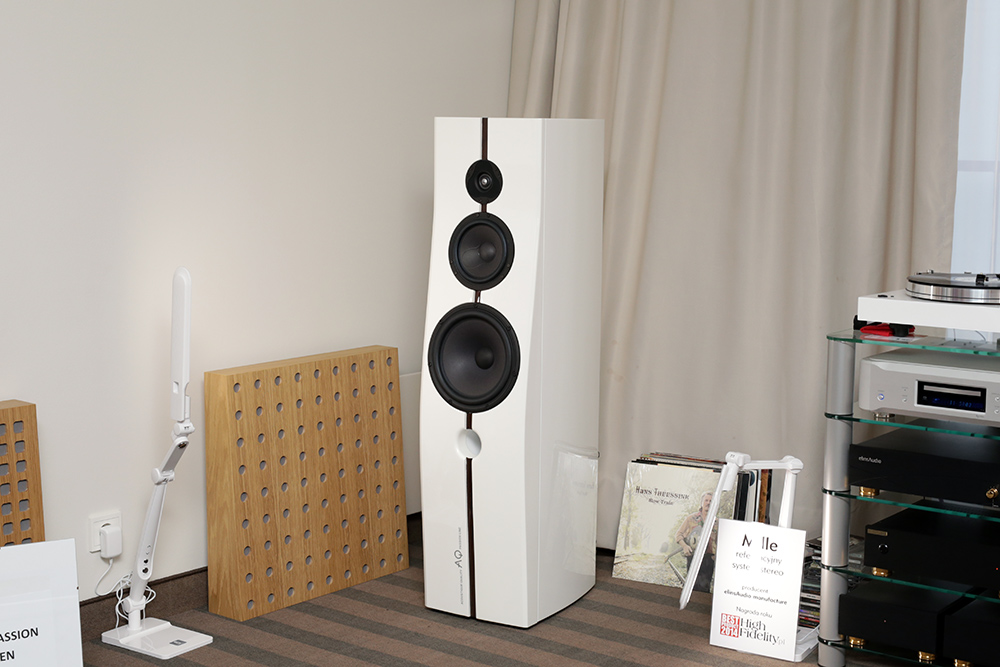 Compared to the Universum, the Acoustique Quality Passion, which comes from the Czech Republic, looks downright conventional, despite the interesting curvature of its front baffle and the stripe up the middle. It’s a three-way design with drivers all sourced from Scan-Speak. Its claimed frequency response is 20Hz to 45kHz, its sensitivity is said to be 88dB (1W/1m), and the impedance is rated at 6 ohms. I listened to a pair for a short time and thought they sounded very powerful in the bass and had great presence in the midrange. The price for the Passion is 76,500 Polish zlotys per pair, which translates to approximately €17,675. 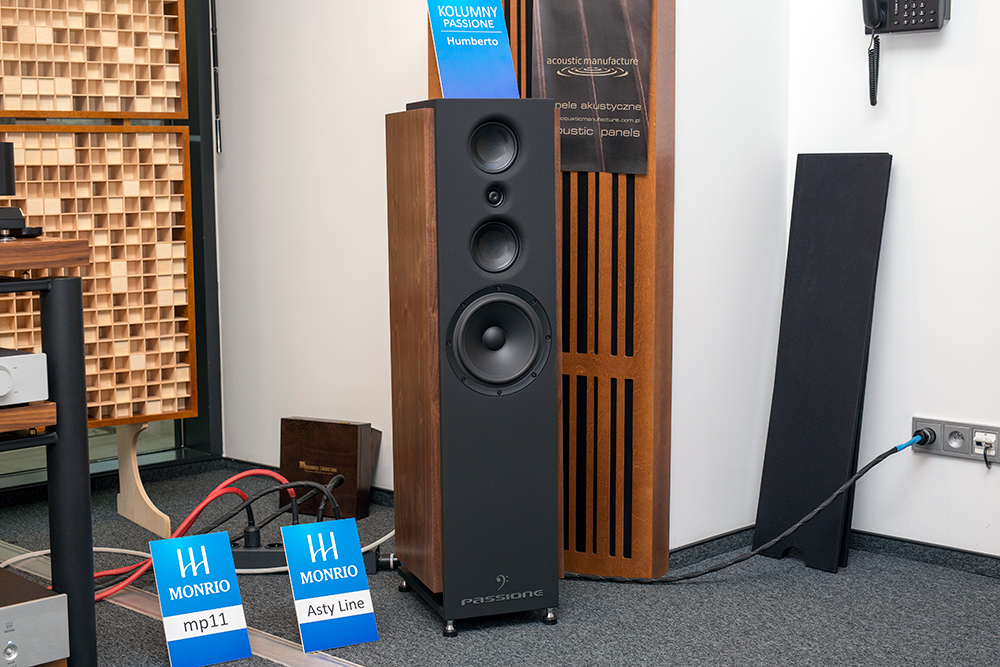 Finally, I found the Passione Humberto loudspeaker, a four-driver, two-and-a-half-way design with a tweeter, two midranges, and a woofer. It sells for €4500 per pair. The midranges cross over to the tweeter, which then takes care of the highs. However, in the low end, instead of the midranges crossing over to the woofer, they’re allowed to generate all the bass they can, so their outputs supplement the output of the single woofer rather than letting it handle all the bass frequencies alone. Based on the name Passione, you might think the company is from Italy; in fact, it’s based in Poland.