Between the Radisson Blu Sobieski and National Stadium exhibits, it didn’t take long to fill up my buffer with a whole pile of speakers to write about. Audio Video Show 2019 seems to have grown this year, and there’s a ton to cover. Let’s get right down to it, with all prices shown in Polish zlotys (zł), euros (€), or British pounds (£). (Currently, the zloty trades at approximately US$0.26. Note that prices in Europe typically include a value-added tax, which in Poland is 23%.) 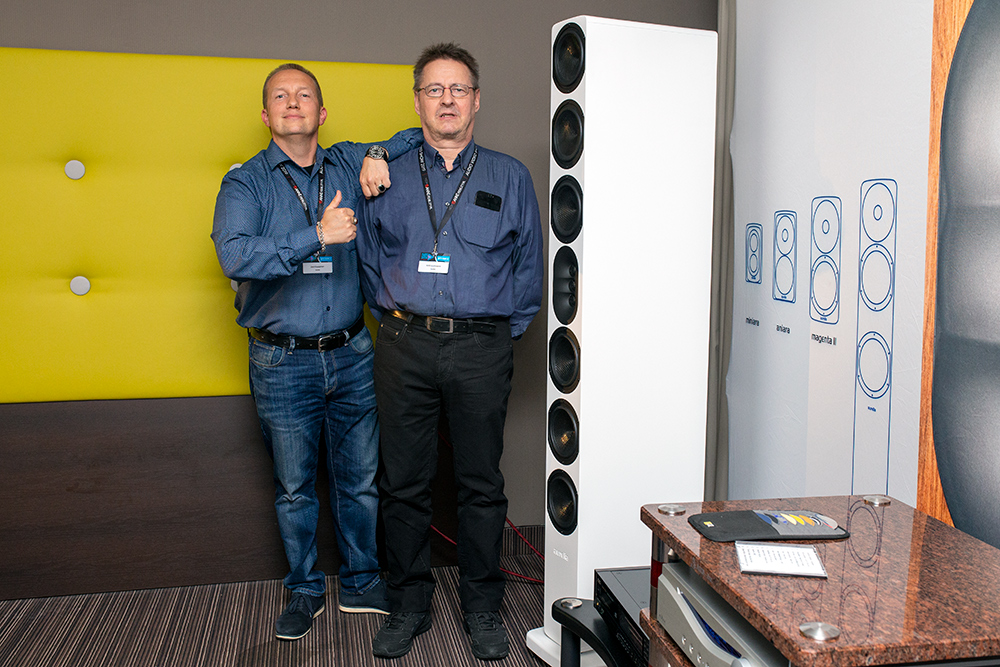 Antti Louhivaara (right) and Jani Kauppinen, the affable and enthusiastic folks at Aurelia, were extremely keen to show us their new baby. Well, baby isn’t totally appropriate, as the Graphica XL stands 5-foot-9 and features an array of drivers that fill its entire front baffle. 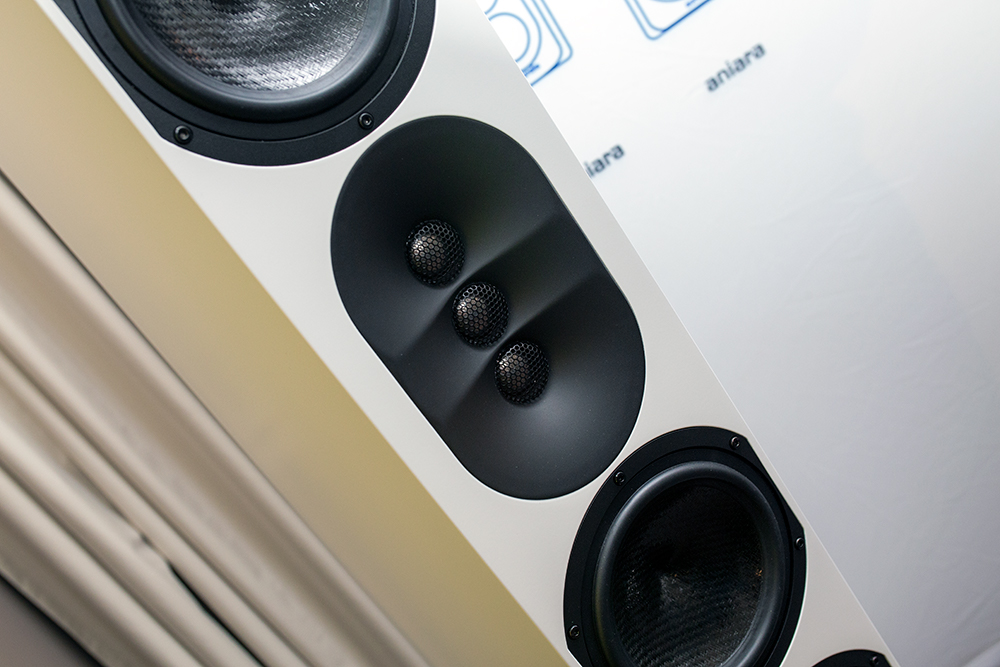 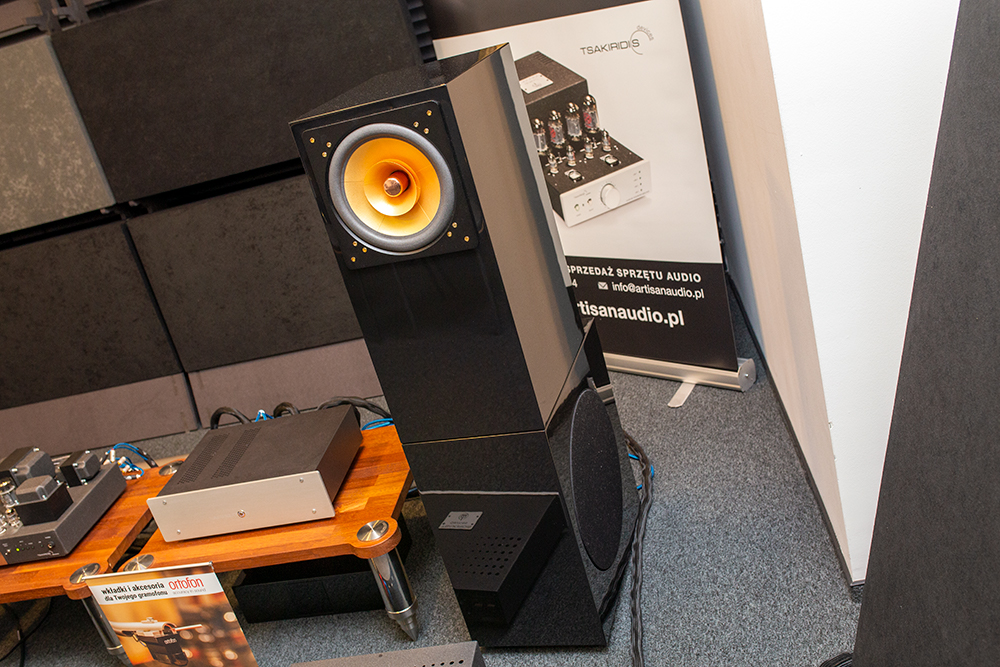 I first encountered Cube Audio at last year’s Audio Video Show, while Doug first saw them back in 2016 during his first visit to Warsaw. Both Doug and I were startled at how well the company managed to retain the endearing dynamic qualities of the single-driver speaker concept while simultaneously avoiding the annoying peakiness that’s until now been endemic in the breed.

While last year’s Nenuphar speaker was quite satisfying in the bass, the company has seen fit to augment the design with a powered subwoofer. The sub section of each Nenuphar BASiS -- the Nenuphar plus the sub -- has a 12" driver on one side, powered by a 150W class-A amplifier. The recommended stereo setup is to have the subs with their woofers facing outside, which is how Cube had them set up in the room at the National Stadium. The Nenuphar BASiS retails for €29,900 per pair. 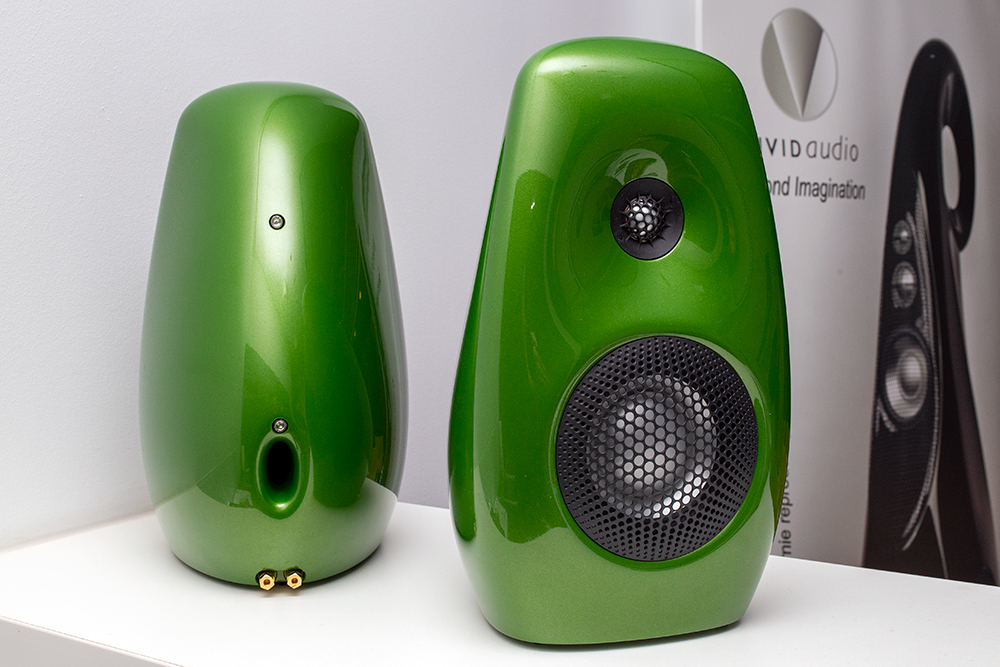 In early 2020, Vivid Audio will release its smallest, least expensive speaker yet -- the Kaya S12, which we saw in prototype form in Warsaw. It’s a two-way with a 1" tweeter in a waveguide and a 6.5" midrange-woofer that’s augmented by a port on the lower rear.

Like all of Vivid’s speakers, the S12’s cabinet is made of a proprietary composite, and each driver has a rear-mounted absorber that dissipates the rearward-directed energy from the driver diaphragm so that it doesn’t interfere with the output that’s going out the front. For the tweeter, there’s a tapered-tube absorber inside the cabinet that mounts to the back of the tweeter. For the woofer, designer Laurence Dickie created a new type of system that he’s calling an “omni absorber” (at least for now) that also resides inside the cabinet.

Without pictures, the construction of the “omni absorber” is really difficult to explain because it’s very complex looking; instead, I’ll just say that it seems to contain multiple cavities that the soundwaves can dive into and not escape back out of. Although the list price has not formally been announced, the company hopes that the S12 will be priced at about €5000 per pair when it’s released. 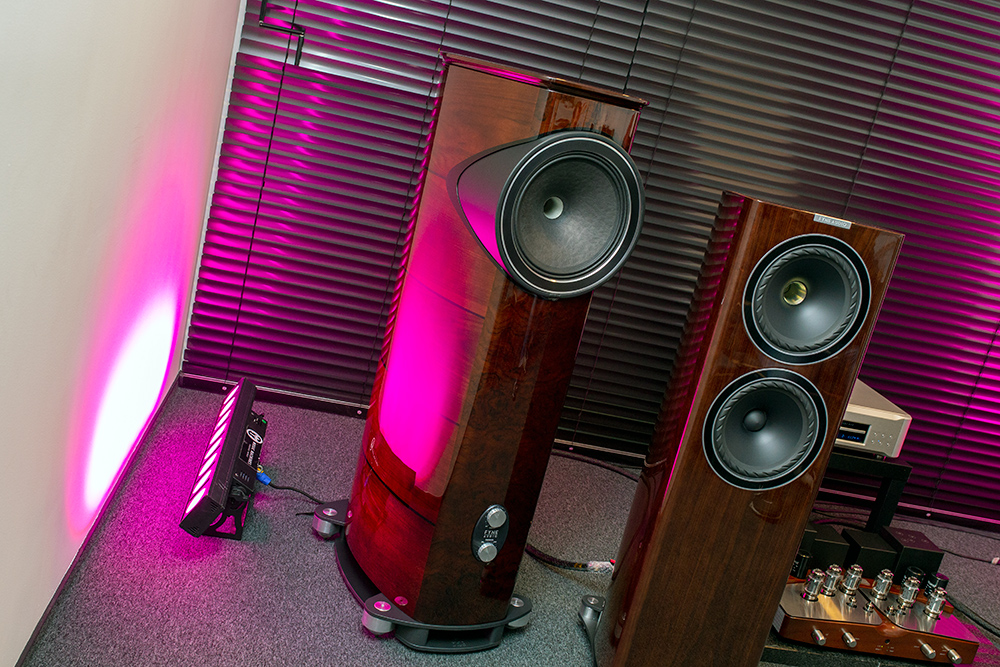 When Tannoy was sold and moved out of Scotland, a bunch of the engineers, along with some others, decided to form their own company. And so, with the support of the Scottish government, Fyne Audio was born. At last year’s Audio Video Show, Fyne Audio was showing its F1-10 model from the company’s flagship F1 series, along with the F502 from its 500 series. This year, the company seems to have exploded, launching the 300 and 700 series, with multiple models in each product line. 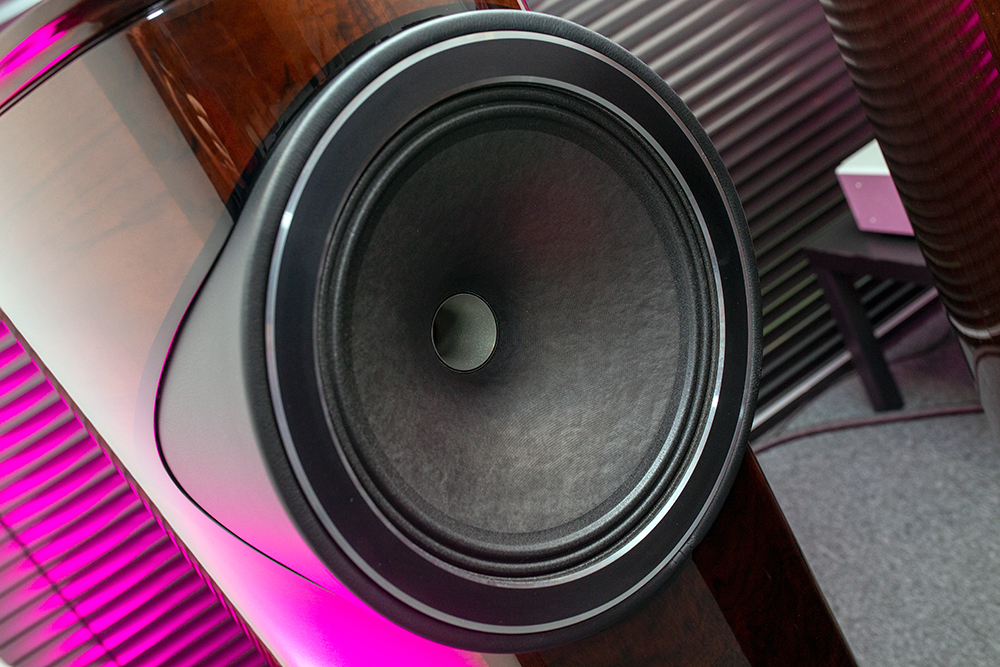 For us, the highlight was the £19,000/pair F1-12, also part of Fyne Audio’s F1 series. It’s a big, beautiful speaker. The single 12" driver is the company’s IsoFlare point-source design, which has a tweeter in the throat of the voice coil. At the front of the formidable F1-12, towards the floor, are two dials -- one dial adjusts high-frequency energy (from 750Hz upward, +/-3dB), while the other functions as a presence control (the region from 2.5kHz to 5kHz, +/-3dB). 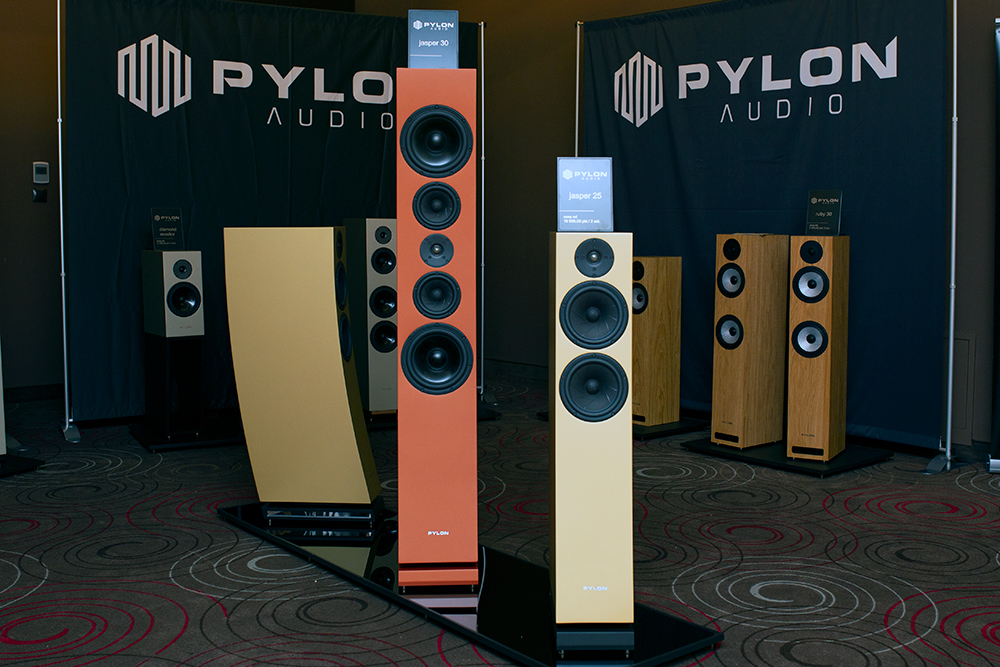 Hailing from Jarocin, Poland, 200km from Warsaw, Pylon Audio was premiering its new Jasper 25 speaker, which is on the right in the photos, but also on the left, a little bit back, turned to one side. The side shot shows the cabinet is not a rectilinear shape, as the front shot indicates. The Jasper 25 is a 2.5-way design employing Scan-Speak drivers. While the speaker retails for zł19,900 per pair in matte colors, many other finishes are available at extra cost. Also showing alongside the Jasper 25 was the Jasper 30 (center in photo), which, as you can see in the picture, has five drivers in a W-M-T-M-W configuration. The 30 was a prototype, however, so there was no price for it available.

The Q10 from Guru Audio just radiates its Swedish-ness. Wider than it is tall, in white with its three wooden legs (the Standpoint stand), the Q10 is purposeful in its simplicity and elegance.

Originally designed as a monitor for recording studios, earlier iterations of the speaker (called QM10) had room inside for amplifier modules, should the need arise. The current Q10 -- now on its third iteration -- is designed specifically for home audio, and it employs proprietary drivers made specifically for Guru Audio by Scan-Speak. In another nod to Scandinavian functionality, the Q10 is voiced for placement close to walls. The Q10 retails for €2200 per pair, while the Standpoint stand is €500 per pair. If you want to further enhance the performance, the company makes . . . 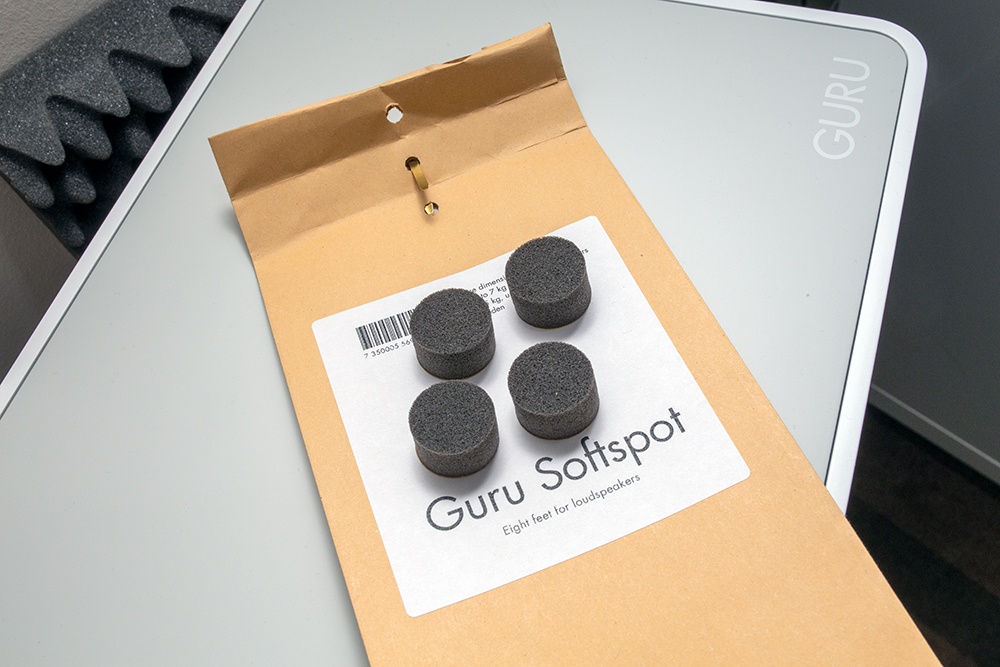 . . . Softspot footers to place between the speaker and the stand, which retail for €35 for eight -- enough for two speakers.