You might not think a major stadium, built for events like soccer, basketball, and motorcycle racing, would be suitable for an audio show. But Warsaw’s PGE Narodowy, or National Stadium, is the main venue for the Audio Video Show, and it works really well. There are two levels of exhibits at the stadium, some in hallways, and others in box suites overlooking the athletic field. Two hotels also serve as venues for the Audio Video Show -- these host mainly high-end exhibitors. 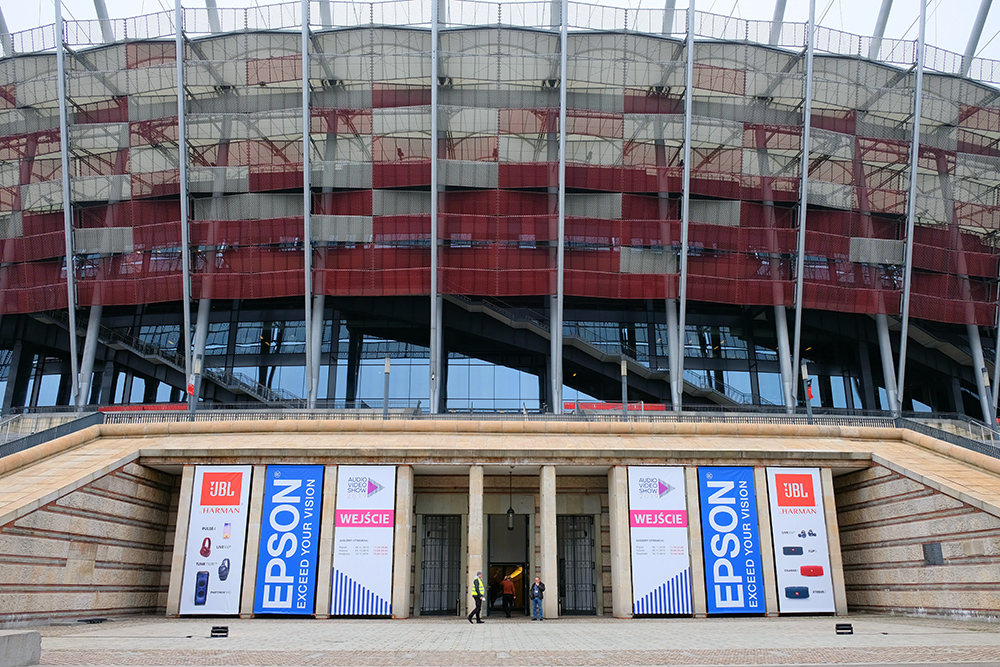 There was a lot of high-end gear at the stadium as well, but as senior editor for SoundStage! Simplifi, my main beat is “convenient, lifestyle-oriented hi-fi.” During my first day at the show, I found lots of products that fit that mandate, including active and powered speakers, network streamers, and streaming amplifiers.

All prices in euros (€) or Polish zloty (zł). (Currently, the zloty trades at approximately US$0.26. Note that prices in Europe typically include value-added tax, which in Poland is 23%.) 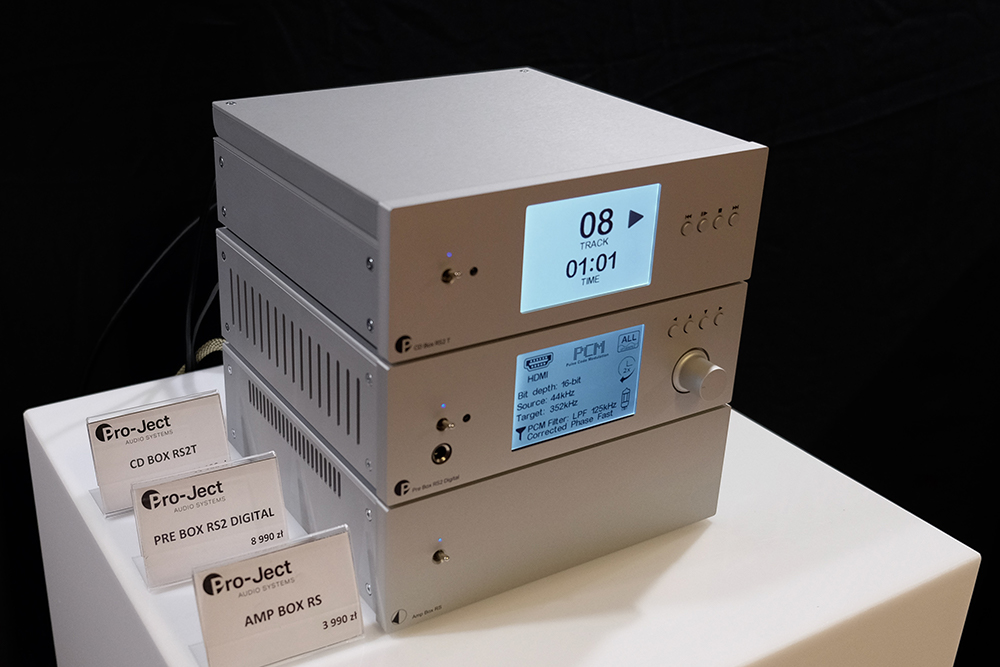 The CD Box RS2 T is built around the CD-Pro8 top-loading mechanism and CD84 servo, which were developed by Vienna-based StreamUnlimited, a company formed by ex-Philips engineers. As Pro-Ject founder Heinz Lichtenegger explained to me with characteristic enthusiasm, the mechanism is suspended in a carbon-fiber subchassis developed by Pro-Ject to dampen high-frequency resonances from the motor. The transport has optical and coaxial S/PDIF outputs, AES/EBU balanced output, and I2S + Masterclock output via HDMI. 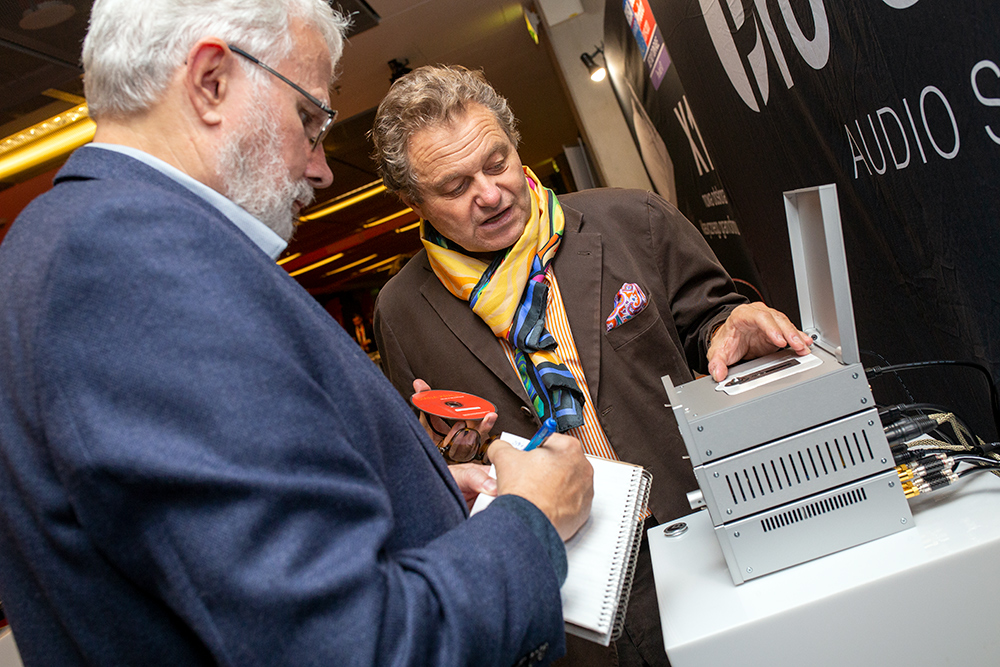 A fully balanced dual-mono design, the Pre Box RS2 employs two ESS Sabre 32-bit DACs in dual-mono configuration, with maximum resolution of 32-bit/768kHz PCM and DSD512 via USB. Other digital inputs include AES/EBU, two optical and one coaxial S/PDIF, and I2S HDMI, all with maximum resolution of 24/192 PCM. There are also XLR and RCA analog inputs. Other features include full MQA hardware decoding, a headphone amplifier, and a class-A output stage switchable between tubed and solid-state operation. 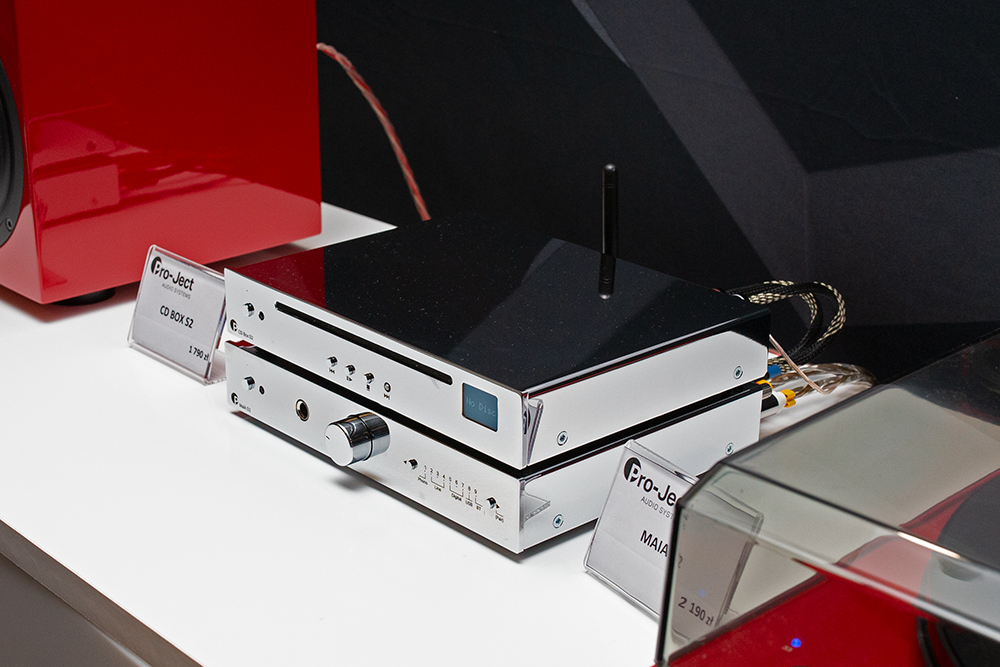 The CD Box S2 and MaiA S2 amplifier aren’t new products, but these beautiful chrome versions are. Rated at 30Wpc, the MaiA S2 (zł2190) has MM phono, line-level analog, USB digital, coaxial and optical digital, and aptX-capable Bluetooth. Maximum resolution is 24/192 via USB and coaxial S/PDIF, and 24/96 via TosLink. The CD Box S2 (zł1790) has both optical and line-level analog outputs. In addition to the chrome faceplate, the MaiA S2 amp has copper heatsinks. Lichtenegger said it has a “beautifully warm sound -- like tubes,” and called it a “micro Devialet.” 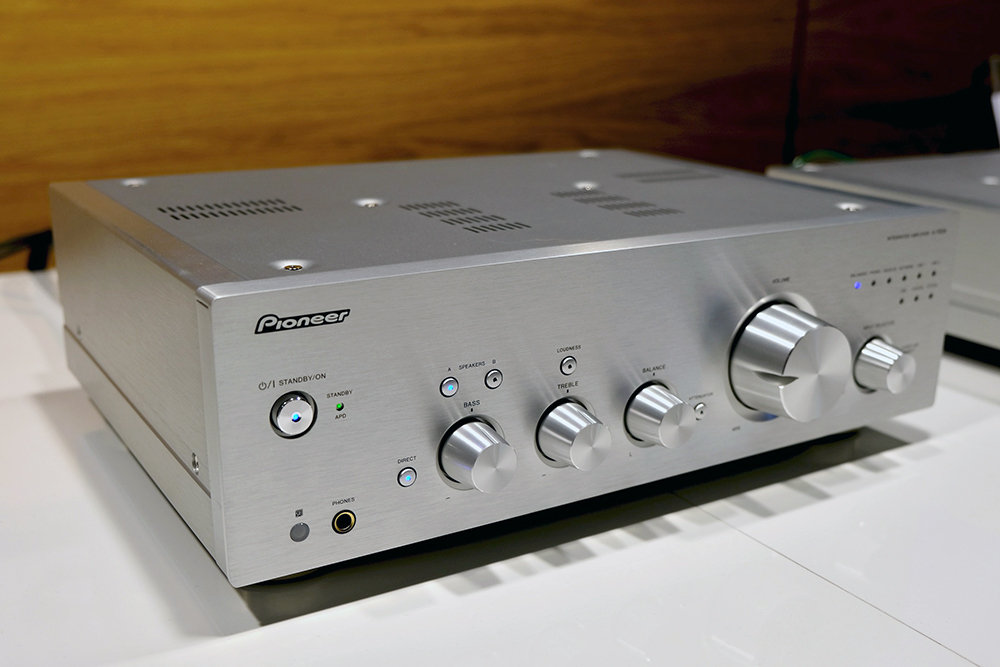 In Europe, major brands like Pioneer offer some interesting two-channel products that aren’t available in North America, and two of these were on active display in the room of DSV, Pioneer’s Polish distributor. DSV was using Pioneer’s A-70DA amplifier (zł6000, shown above) and N-70AE network music player (zł6500, shown below) in a system with KEF R11 floorstanding speakers.

The A-70DA is a MOSFET-based class-D design, with rated output of 90Wpc into 4 ohms or 65Wpc into 8 ohms. The digital section employs a 32-bit ESS Sabre DAC, with maximum resolution of 32/384 PCM and DSD256 via USB -- TosLink and coaxial S/PDIF connections are also available. Analog inputs include MM/MC phono, balanced XLR, and four sets of unbalanced line-level RCA inputs. The A-70DA’s three-part chassis has separate shielded sections for its power supply, preamp, and power amp. 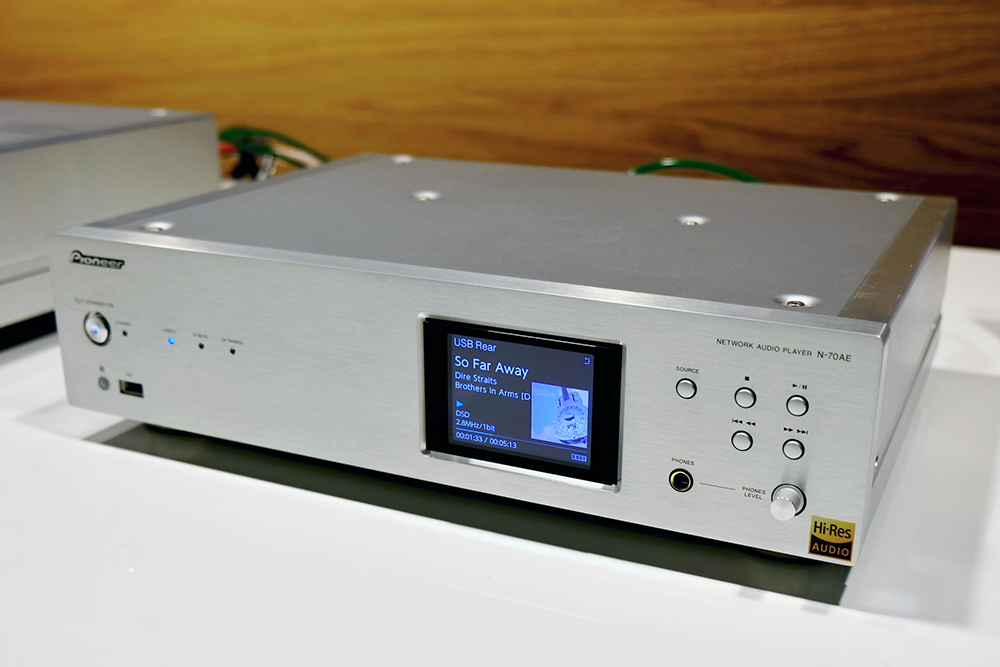 The N-70AE integrates a network streamer with support for AirPlay, Chromecast Built-in, DTS Play-Fi, and MQA, with an ESS Sabre-based DAC with a maximum resolution of 32/384 and DSD512 via USB. Supported streaming services include Spotify, Tidal, and Deezer. In addition to the USB Type-B port for connection to a computer, the N-70AE has front and rear USB Type-A ports for connecting external drives. Output options include balanced XLR and unbalanced RCA analog, and TosLink and coaxial S/PDIF digital. 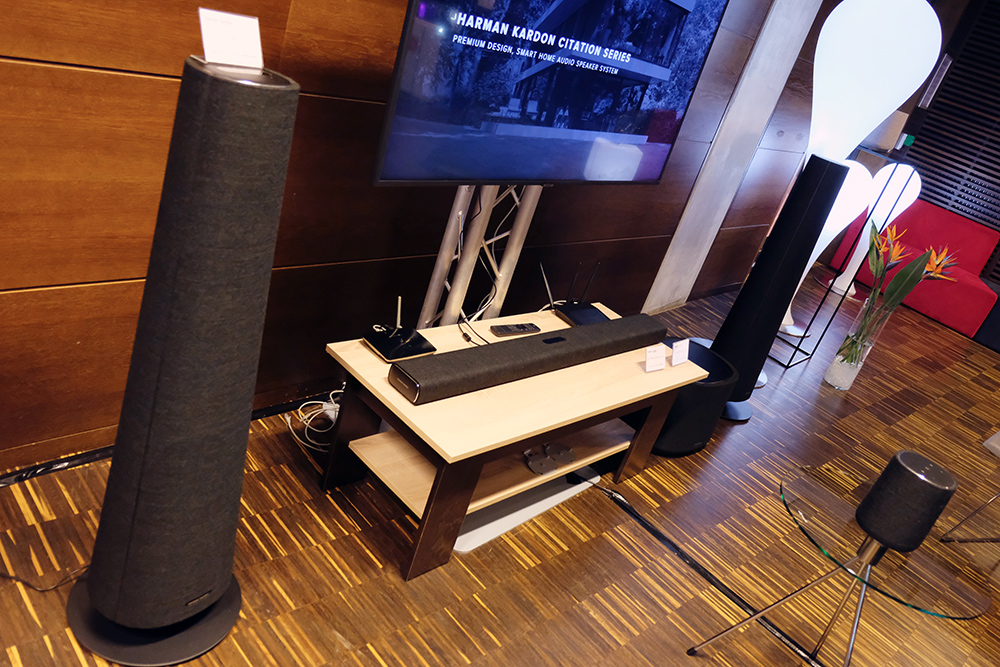 Harman/Kardon introduced its Citation Wireless speakers a little over a year ago, but somehow they fell under my radar. The series includes two mono and two stereo tabletop speakers, a soundbar, a surround speaker, and a subwoofer.

Each Citation Tower contains a 200W amplifier powering a 1" dome tweeter, two 4" midrange-woofers, and an 8" woofer. A pair can be used on their own for stereo playback, or grouped with the Citation Bar, Surround, and Sub for home-theater use, and/or with Citation tabletop speakers via Google Home for multi-room music. I think I need to get a pair of Citation Towers in for a review on SoundStage! Simplifi. 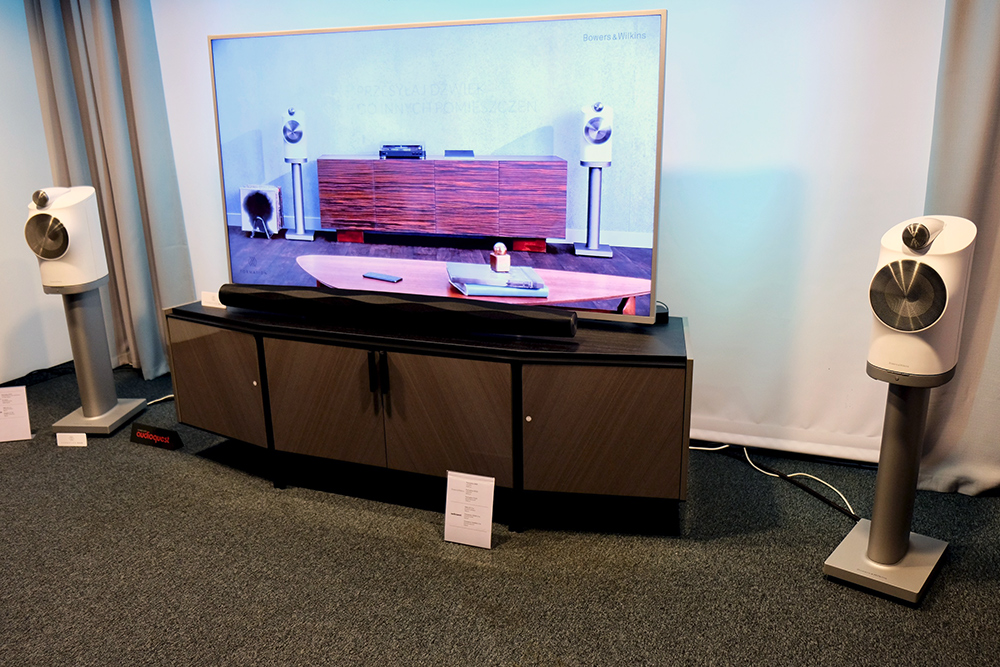 In one of its rooms at the Warsaw Stadium, the Polish distributor Top Hi-Fi & Video Design was demonstrating the Bowers & Wilkins Formation Duo active speakers, which may be my favorite of the 20-plus products I’ve reviewed so far this year. 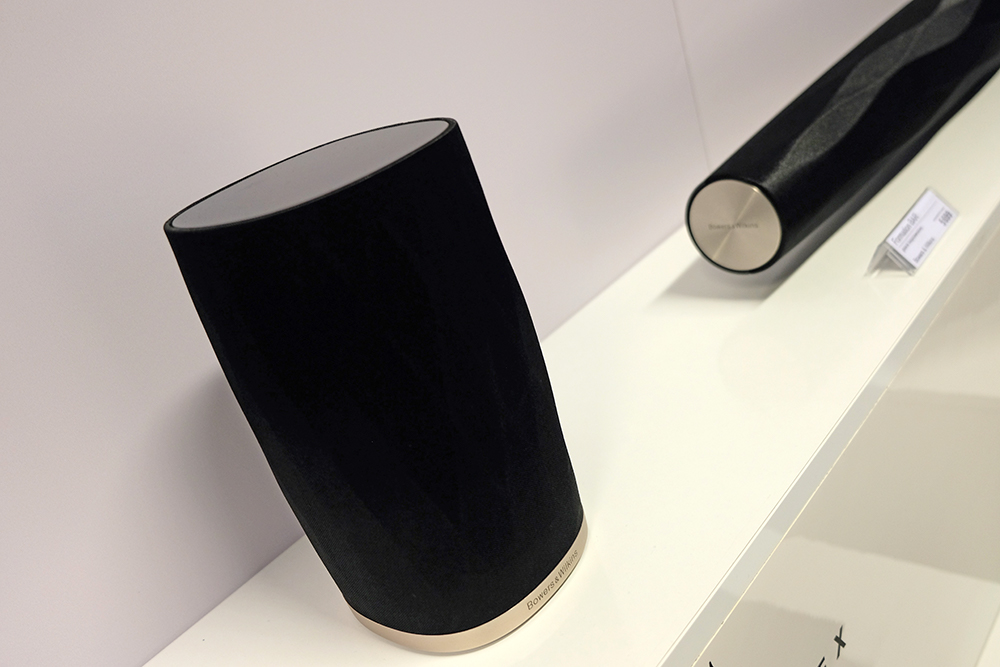 B&W recently added a new product to its Formation range of wireless products, which, in addition to the Formation Duos, also includes the Formation Bar soundbar, Formation Wedge tabletop speaker, Formation Bass subwoofer, and Formation Audio streaming preamp. On silent display in Warsaw, the new Formation Flex (zł1199 each) employs a 4" glass-fiber woofer and 1" dome tweeter, with each driver powered by its own 50W amplifier.

What’s particularly interesting about the Flex is that a pair of them can be combined with a Formation Bar and Bass to create a 5.1-channel surround-sound system. The only wires will be the AC cables powering each speaker, and the signal cable(s) connecting the Bar to the TV and/or video source components. The speakers communicate with each other wirelessly over a proprietary mesh network, with maximum resolution of 24-bit/96kHz, and latency under a microsecond. 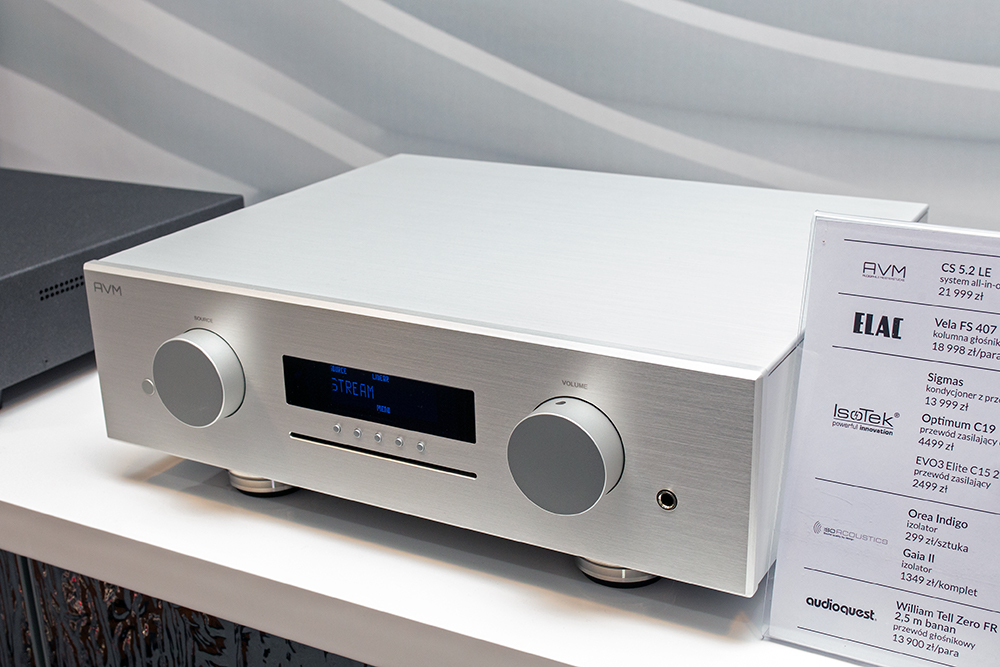 Top Hi-Fi & Video Design is also the Polish distributor for the German brand AVM, and in another room it was demonstrating the Evolution CS 5.2 LE streaming CD receiver, a scaled-down version of the CS 5.2. Priced at zł11,999, the CS 5.2 LE is rated at 200Wpc, compared to 330Wpc on the CS 5.2. It combines a slot-loading CD player, network streamer with built-in support for Tidal and Qobuz, and USB DAC with maximum resolution of 24/192 PCM. 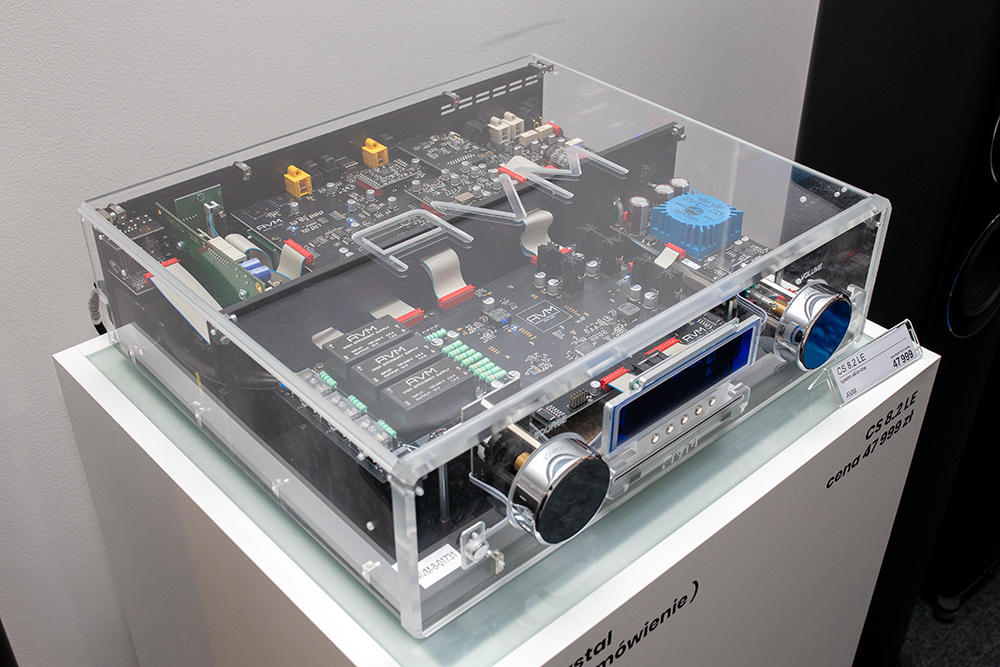 On silent display in the same room was the Ovation CS 8.2 Crystal streaming CD receiver (zł47,999) -- a new version of the Ovation CS 8.2, shown with a transparent acrylic case, so you can see everything inside. Rated at 500Wpc, both models have tubed line stages, quad DACs with maximum resolutions of 32/384 PCM and DSD128, a network streamer with Tidal and Qobuz support, and a class-A headphone amp. 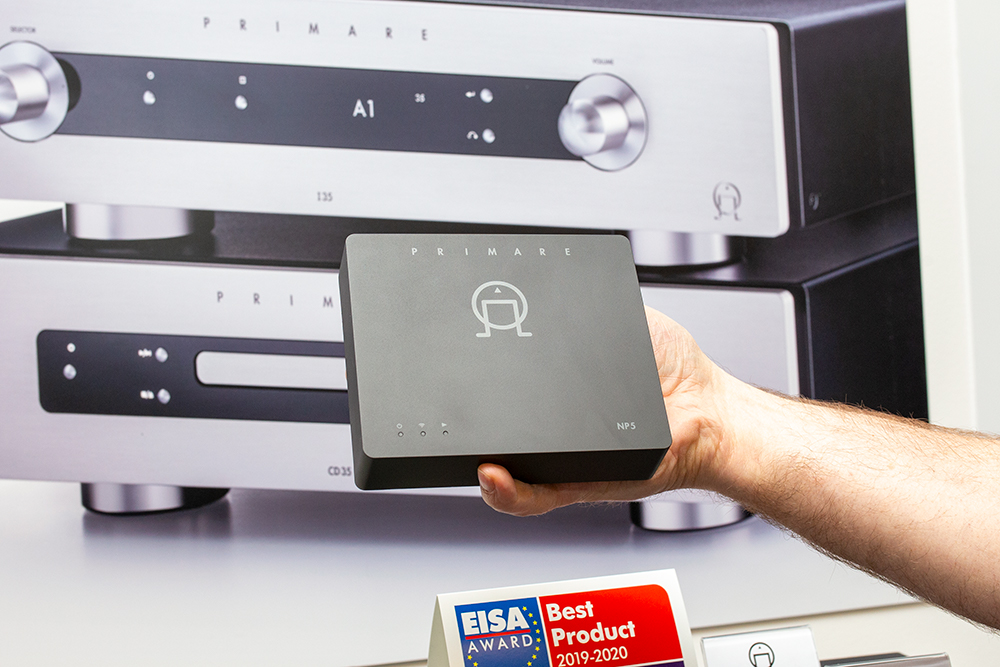 New from Sweden-based Primare is the NP5 Prisma Network Player, shown for the first time at the Audio Video Show. Priced at €500, the NP5 contains the same streaming features found in Primare’s CD15 Prisma and CD35 Prisma CD players; I15 Prisma, I25 Prisma, and I35 Prisma integrated amplifiers; and SC15 Prisma preamplifier -- I reviewed the SC15 in May. Like all of those products . . . 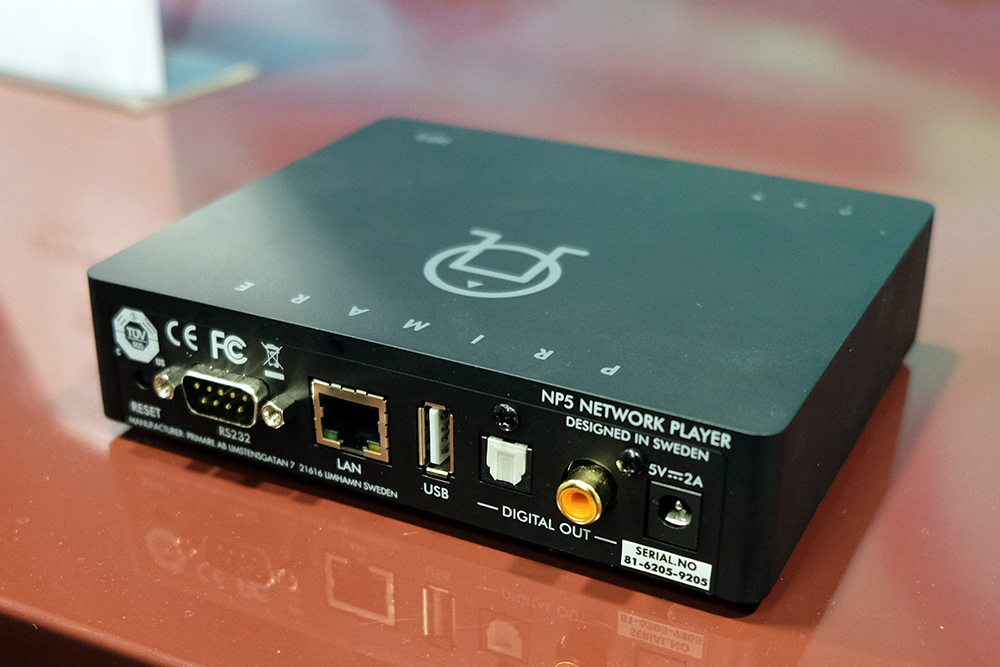 . . . the NP5 features Chromecast Built-in, AirPlay, Bluetooth, and Spotify Connect. A forthcoming update will add AirPlay 2 capability and full Roon support to all Prisma products, including the NP5.

On the first day of the Audio Video Show, I also saw some interesting active and powered speakers from DALI, Canton, and Jamo. I’ll cover these and other products in my next report from Warsaw.