There wasn’t much advance notice, but it wouldn’t be a pop-up if there were. Recently, New Jersey-based Gingko Audio extended a last-minute invitation to a few audiophiles and fellow manufacturers to attend a pop-up audio demo on March 23. Word of the event was also spread to the New York and New Jersey audio societies.

The pop-up’s goals were clear. First, in return for generous amounts of shrimp, wings, ribs, and alcohol, the attendees would preview the gear that Gingko might bring to AXPONA 2019, to be held in Chicago from April 12 to 14. Although the company’s soon-to-be-introduced Clarissa LE speaker ($3000 USD per pair; stands add $500 per pair) will undoubtedly be at AXPONA, this would help the company decide which system components might most appeal to the show’s attendees. Second, the pop-up’s attendees would hear and opine on the sonic differences in audio systems driven by vacuum-tube-based class-A and solid-state class-AB and class-D amplifiers. I answered the call to service and, with two fellow members of the NY Audio Society, made the over-two-hour trek from New York City to the event. 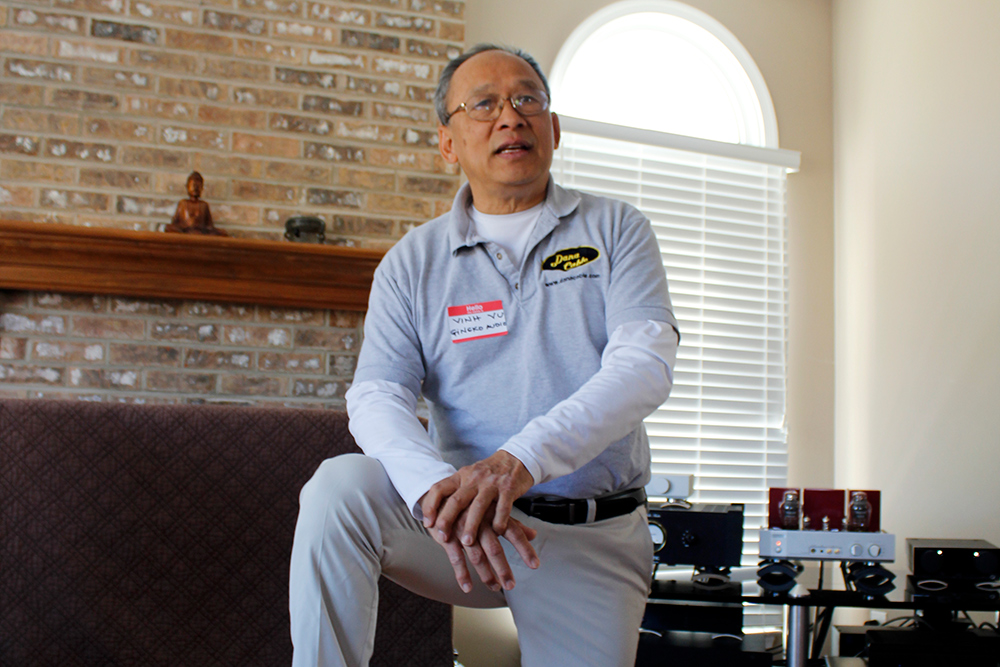 Vinh Vu and Norm Ginsburg started Gingko Audio in 2000 as a manufacturer of component racks, platforms, and dust covers. During 2005, Vu was walking in his factory’s parking lot when he noticed that someone had discarded many large rolls of multi-layer paperboard tubing in a dumpster. Due to that material’s acoustically inert nature and the fact that tubes lack standing-wave-producing right angles, Vu thought that he might be able to use one or more of the dumpster’s tubes to construct a speaker.

After consulting with Bill Legall of the speaker repair shop Millersound, Vu built a two-tube speaker: the Tubulous One ($3000/pr. when sold). The speaker’s top tube, which held the tweeter on top and three midrange-woofers aligned in an isobaric configuration, was horizontally oriented to face the listener and swiveled on the vertical and horizontal axes to achieve the proper toe-in. At the time of its introduction, the Tubulous One won over many male audiophiles. However, due to the speaker’s decidedly unconventional appearance, it was not appreciated by their spouses and did not sell well. 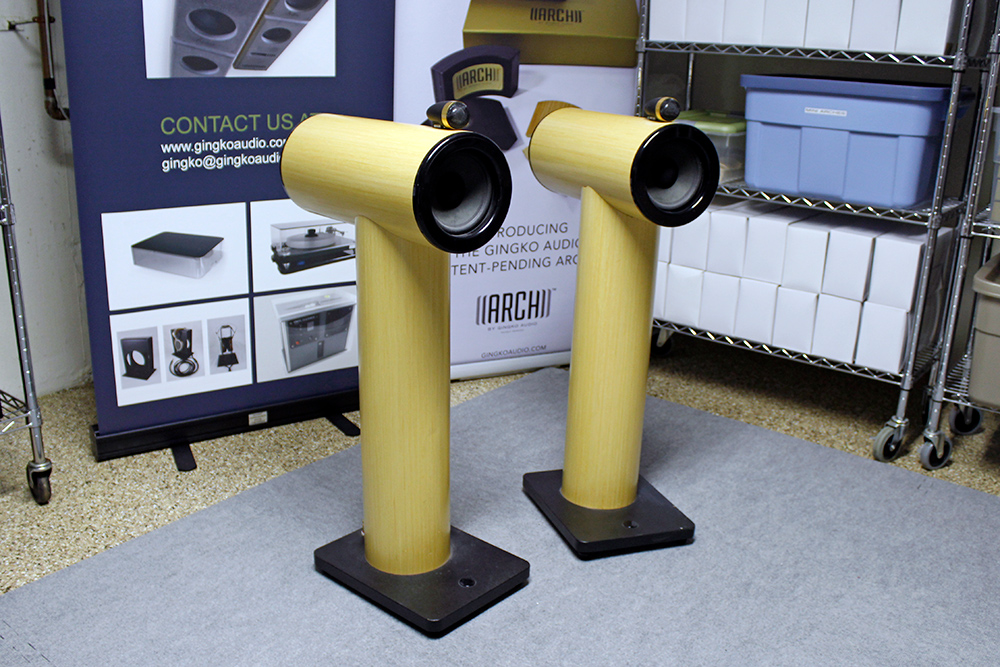 Playing off the Tubulous One speaker’s sonic design success, Gingko introduced the ClaraVu tube-based speaker in 2008. Now in its Mk3 version ($6000/pr.) with companion ClaraVu Mk3 powered sub module ($3000/pr.), that speaker contains within its two stacked, conventionally shaped, attractive, and spouse-friendly MDF cabinets a 1" soft-dome tweeter and two 6.5" paper-cone woofers, the latter of which are vertically mounted in a sealed paperboard tube. Vu states that the speaker’s internal tube structure directs sound to the cabinet’s rear, thus roughly acting as an “acoustic transmission line,” which, unlike sealed or ported bass-cabinet designs, uses a long duct as an acoustic waveguide.

Gingko is now launching a second Tubulous descendent, the Clarissa LE, which was demonstrated at the pop-up event. Featuring a single conventionally shaped MDF cabinet, this two-way, limited-edition speaker features a 1" soft-dome tweeter and a 6.5" woofer, the latter encased by a paperboard tube residing within the cabinet. 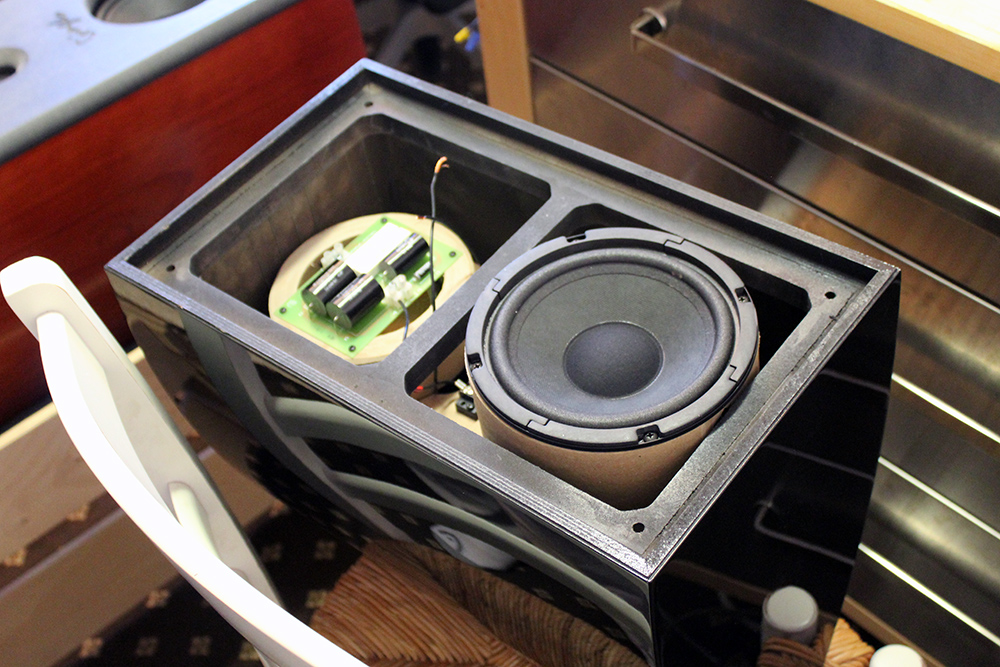 Inside the Clarissa LE

Back to the pop-up event. Upon our early arrival, I photographed the Tubulous speaker and the audio components that would be used at the event. A cocktail hour then allowed everyone to get acquainted before Vu officially welcomed everyone and kicked things off.

Each of the three test systems streamed Tidal through Roon and contained one of the following amplifiers: a 100W class-D Cyrus One HD integrated amplifier with built-in digital-to-analog converter ($1400) from England; a single-ended, tubed 8W class-A Triode Corporation TRV-A300XR integrated amplifier ($3600) from Japan; and a 150W class-AB Wells Audio Majestic integrated amplifier ($4400) from the United States. Also, each of the systems used the Clarissa LE speakers with ClaraVu stands, Danacable cables, and Gingko ARCH component supports. 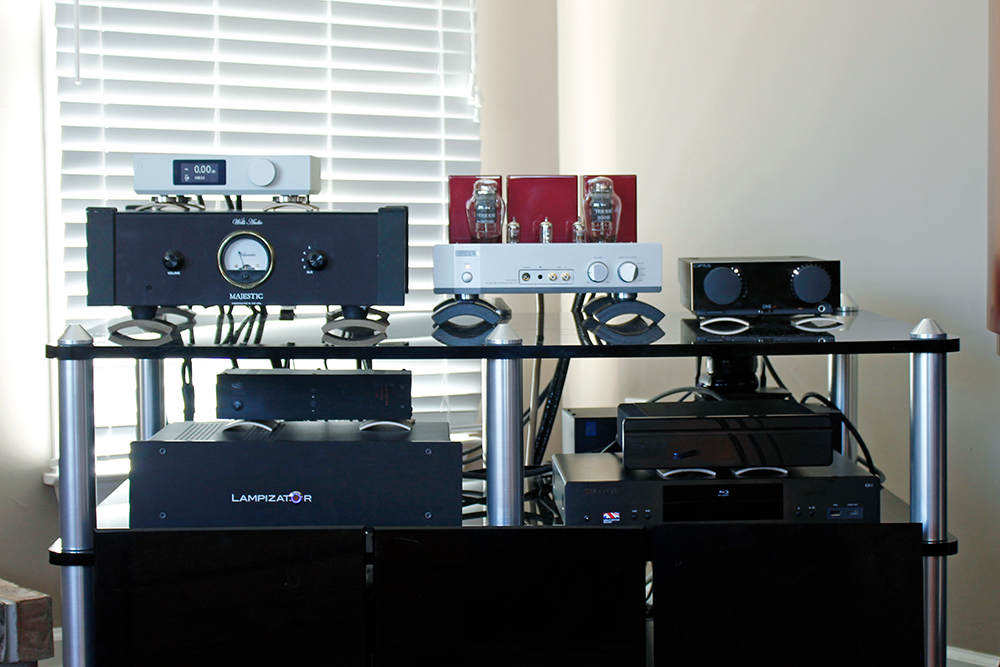 However, that is where the similarities between the test systems ended. For example, while the system containing the Cyrus One HD took advantage of that component’s DAC, the other systems, sometimes interchangeably, used two other DACs: a COS Engineering D2V ($2900) and Lampizator Amber II ($2400). Due to these differences, Vu made it clear that the matchup was not an amplifier shootout. Rather, it was an opportunity to audition the Clarissa LE and provide a rough but hopefully fun way to audition the three most common amplifier topologies.

The crowd was eager to let the audio games begin. Vu started with the Wells Audio Majestic amplifier and COS Engineering DAC. I was unimpressed. The sound was cold, brittle, and closed-in, with limited sustain and decay. After several songs, Vu moved to the Triode Corporation and Lampizator Amber II combo. I and the other attendees vastly preferred these components, which produced excellent soundstaging, a gorgeous midrange that bristled with harmonic texture, and much more, well, life. On Ray Charles and Natalie Cole’s version of “Fever,” from Genius Loves Company, voices were warm and lush. Piano and other instruments had excellent decay. 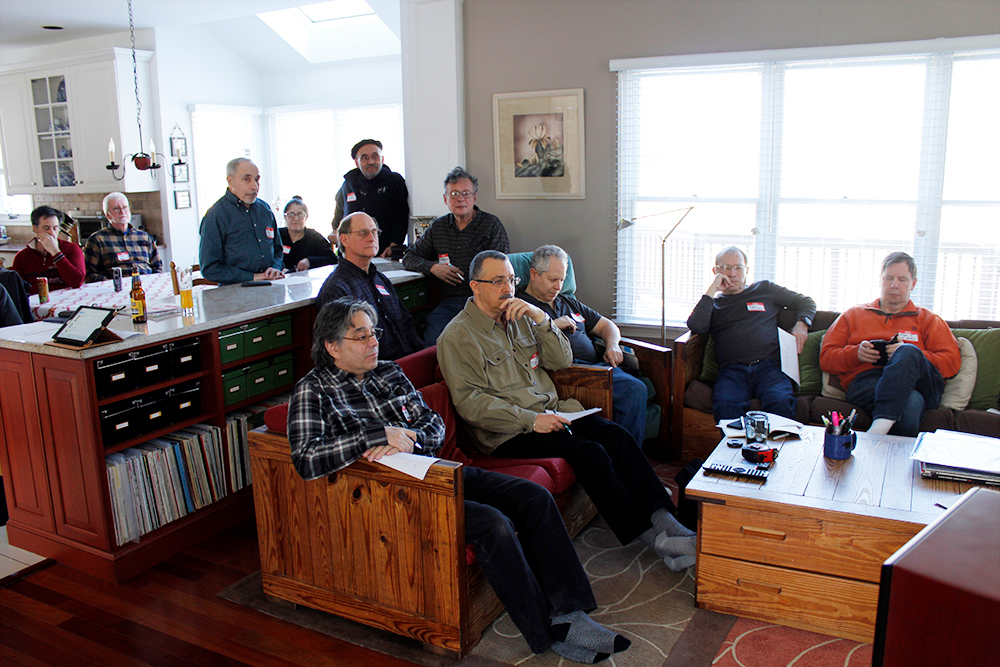 When needed on a number of other tracks, though, the Triode Corporation / Lampizator combo did not produce very low bass. But what the heck do you want from a flea watt, single-ended amp? However, a somewhat less venial sin occurred with this pairing on Aaron Copland’s “Fanfare for the Common Man,” performed by Eiji Oue conducting the Minnesota Orchestra. Even at moderate volumes, transients were dulled and the composition proved too complex for the amp, which blurred everything into a cacophonic jumble.

Next up was the Cyrus One HD integrated amp with its built-in DAC, which was very good, but the group still overwhelmingly preferred the Triode Corporation and Lampizator Amber II combo. Vu then paired the Wells Audio Majestic with the Lampizator. Although many folks liked that better than when the Wells was paired with the COS Engineering, many of the attendees still preferred the Triode Corporation / Lampizator pairing. 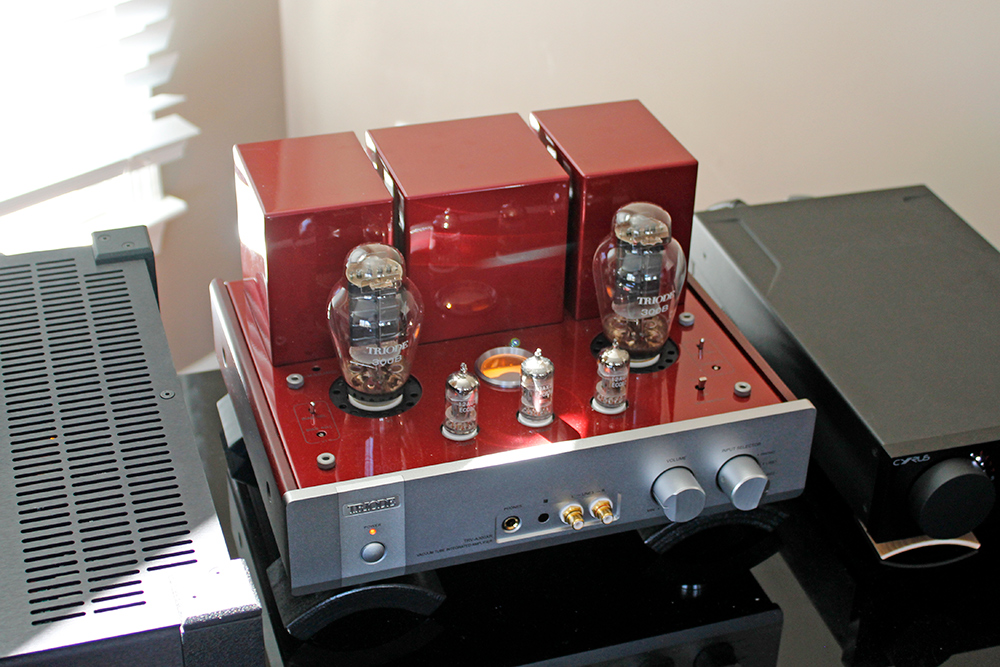 After an extended lunch break, Merrill Wettasinghe, founder of Merrill Audio, introduced himself. He brought a prototype of his new 100W class-D Audio Element 112 stereo amplifier (price TBD), which uses gallium nitride transistors. At a brief presentation concerning the amp’s other technological features by Wettasinghe, Vu paired it with the Cyrus One HD’s internal DAC. However, right when the music started, our ride to the train station (Norm Ginsburg) signaled that he was leaving and we were forced to high-tail it out of there. I was told, however, that the attendees decidedly felt that this combo sounded wonderful, with excellent warmth, body, transients, and perceived dynamic range.

To further add to the mix, Vu told me that after the meeting, he switched the amplifier/DAC combos several times, pairing the Lampizator Amber II DAC with the Wells Audio Majestic integrated amp and the Triode Corporation amp with a Pro-Ject Pre Box S2 DAC-preamplifier ($399). A comparison of these pairings, he stated, rendered no clear winner, although he favored the Amber II / Wells Audio Majestic duo on large, complex orchestral works.

One thing is clear: through all of the system changes, the Clarissa LE speakers appeared to reveal just what they were fed. When the electronics and recording dictated expansive dynamics, a deep and large soundstage, and rich harmonic textures, the speakers delivered. When the component pairing was not ideal, the speakers revealed that too. I look forward to hearing what these speakers can do with media such as a digital download, LP, or CD. From what I heard at the event, things look very promising. 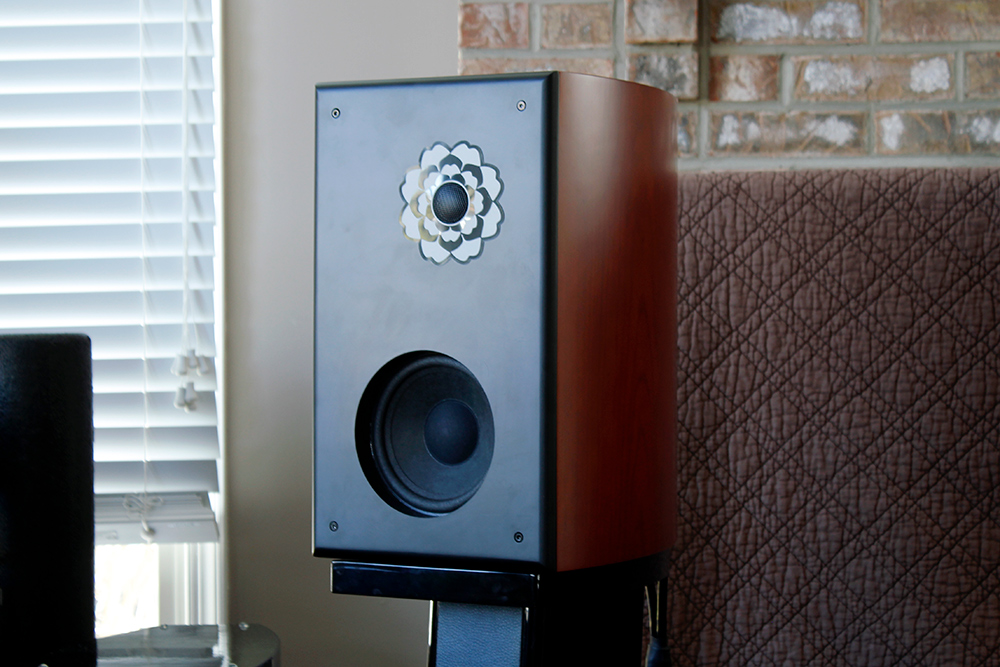 The moral of this story is threefold. First, perhaps far more than amplifier topology, component matching and personal musical preferences are critical in assembling an audio system. Second, anyone attending AXPONA may want to check out Gingko’s new Clarissa SE speaker and learn which audio components were selected by the company for the show. Finally, when one or more audio manufacturers offer to ply you with food and booze to get you to listen to their new gear, you kindly accept their offer. Kudos to Gingko Audio’s Vinh Vu and Norm Ginsburg for an extremely fun and informative event.