A Day with Ralph Glasgal, Founder of the Ambiophonics Institute

Audio retailer Larry Borden (Distinctive Stereo in River Vale, New Jersey) and I recently paid a visit to Ralph Glasgal at his large, ultra-modern New Jersey home. Ralph, the inventor of three-dimensional (3D) imaging digital signal processing technology Ambiophonics and founder of the Ambiophonics Institute, is generally not known for aiming low. In fact, he hopes that Ambiophonics will succeed the stereo and 5.1 surround-sound formats. Before proceeding, though, I should address Ralph’s interesting background.

Ralph, who is now 87, started his career in the 1950s when he designed recording equipment for the RCA Corporation and audio components for Fischer Radio. In 1957, Ralph left his audio career behind to become a world explorer. It wasn’t long before he reached the base camps of the world’s ten highest mountain peaks. 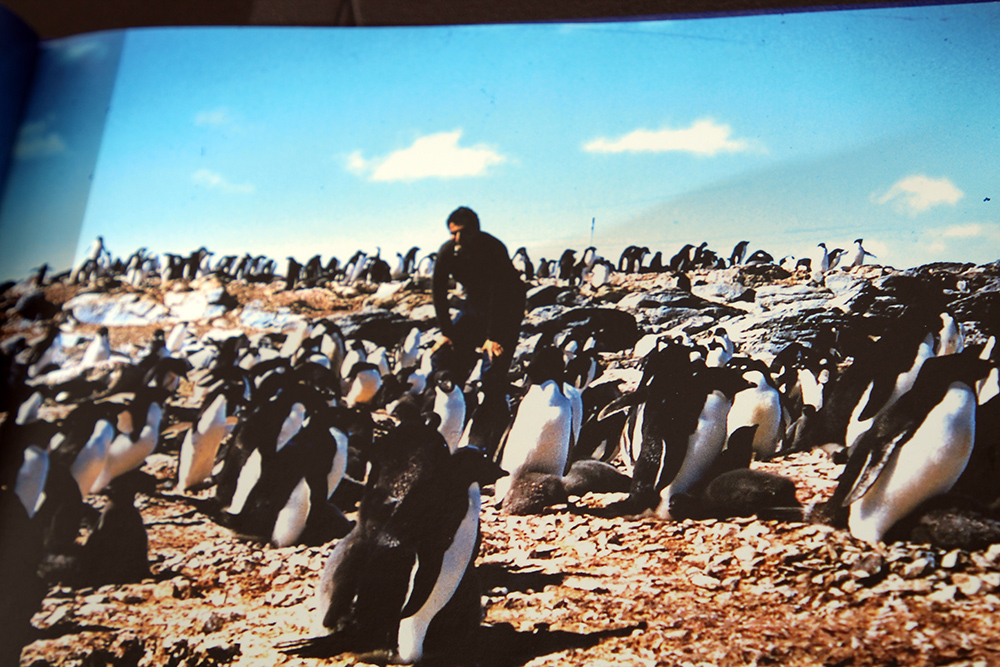 One of the rare instances in which Ralph aimed low, so to speak, occurred in 1957, when he became the first human to set foot on a small penguin-populated island, part of the Donovan Islands, in Vincennes Bay, which is located off the coast of Antarctica. It was at that time that the island, now known as Glasgal Island, was named after him. During his travels, Ralph also made frequent trips to Tibet and Nepal, at which times he amassed an incredible Eastern art collection. 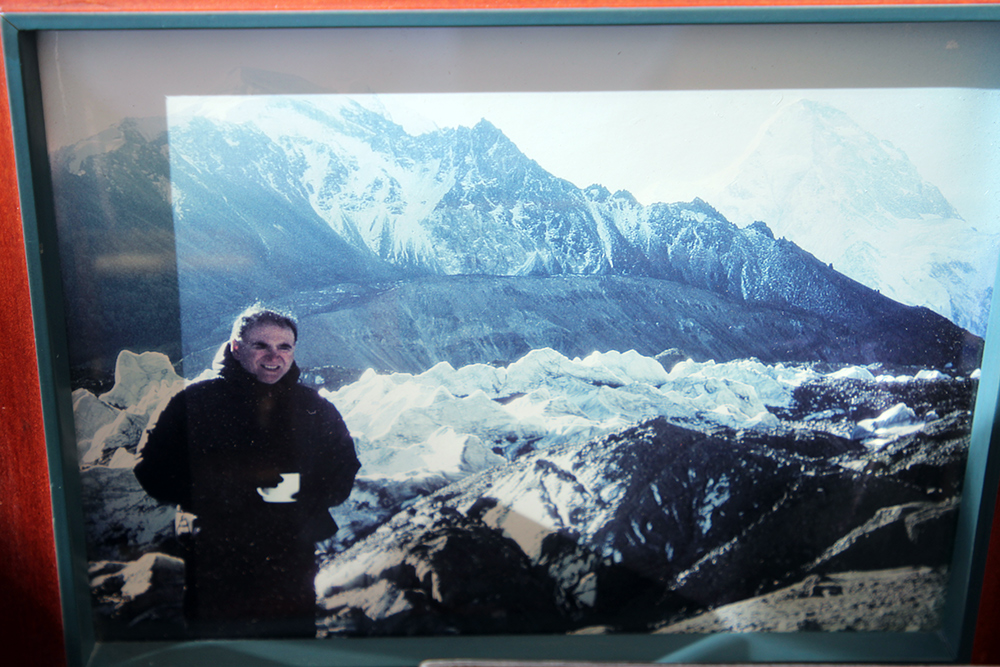 In the late 1970s, Ralph returned home from his world explorations and founded a company, Glasgal Communications, in a newly emerging field involving the transfer of data over telephone lines via cable modems. Eventually, the company was bought out, providing Ralph with the financial resources to do whatever the heck he wanted to.

Ralph returned to his great passion, audio. According to Ralph, stereo and multichannel playback didn’t sound right to him. He identified the problem as interaural crosstalk, a then-already-known artifact that is created during the operation of virtually all stereo playback systems. Interaural crosstalk occurs when sound from the left channel reaches the listener’s right ear or sound from the right channel reaches his left ear. Crosstalk hinders the ears’ ability to perceive the spatial cues that exist in most stereo recordings, thus preventing the reproduction of realistic aural images. When interaural crosstalk is eliminated, images are freed from the area located between the speakers and become much more 3D and realistic.

Crosstalk can be mostly eliminated by standing several mattresses on their sides from a point between the speakers to the listener’s face. In fact, early interaural crosstalk cancellation (IXTC) technologies used some type of wall or other barrier to effectuate channel separation. Subsequent IXTC technologies, mostly pursued in the analog and time domains by audio industry pioneers such as James Bongiorno (Great American Sound), David Griesinger (Lexicon), and Bob Carver (Bob Carver Corporation), eliminated the need to use a barrier. More recently, a company called Theoretica Applied Physics, founded by plasma rocket scientist and Princeton University professor Edgar Choueiri, has marketed several very interesting IXTC high-end digital processors that operate in the frequency domain. (Look for my review of one of those components, the Adio, on SoundStage! Ultra this fall.) 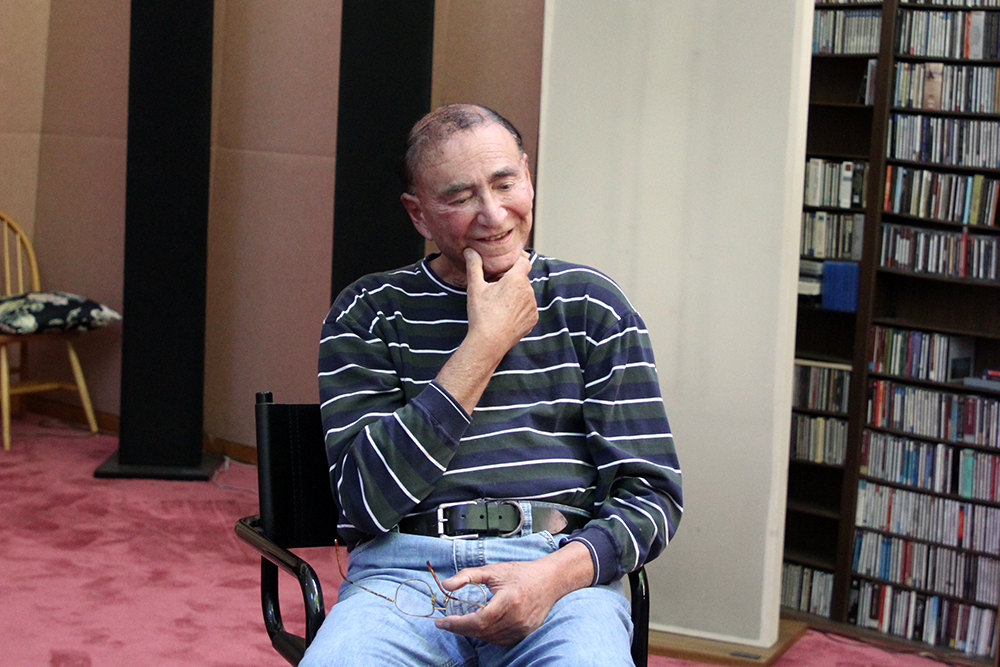 This brings us back to 1995. Using funds from his company’s buyout, Ralph pursued a new IXTC technology that he called Ambiophonics, the first to operate in the digital domain. He purchased a large home with many rooms suitable for audio research and testing, and also recruited several talented engineers. But Ralph and his team were ahead of their time -- only the largest and most expensive cutting-edge mainframe computers contained the processing power necessary to number crunch Ambiohonics’ digital algorithm, called Recursive Ambiophonics Crosstalk Elimination (RACE). Thankfully, breakthroughs in computing power eventually permitted small, inexpensive computers to implement this new IXTC technology.

In short, Ambiophonics uses the RACE algorithm to combine recursive delayed and attenuated signals with the original one. It is typically used in an untreated room with two closely spaced front speakers that can be supplemented with two rear ones. Ambiophonics creates a laterally confined 3D sweet spot that holds only one listener in the lateral plane. However, it can accommodate multiple listeners if they sit one behind each other.

Perhaps due to Ambiophonics’ laterally narrow sweet spot, the technology has not been widely adopted within the audio industry. Some years ago, it was licensed by TacT Audio, which specialized in high-end digital amplification and room correction, and was incorporated into several of the company’s products. Unfortunately, TacT is no longer in business. 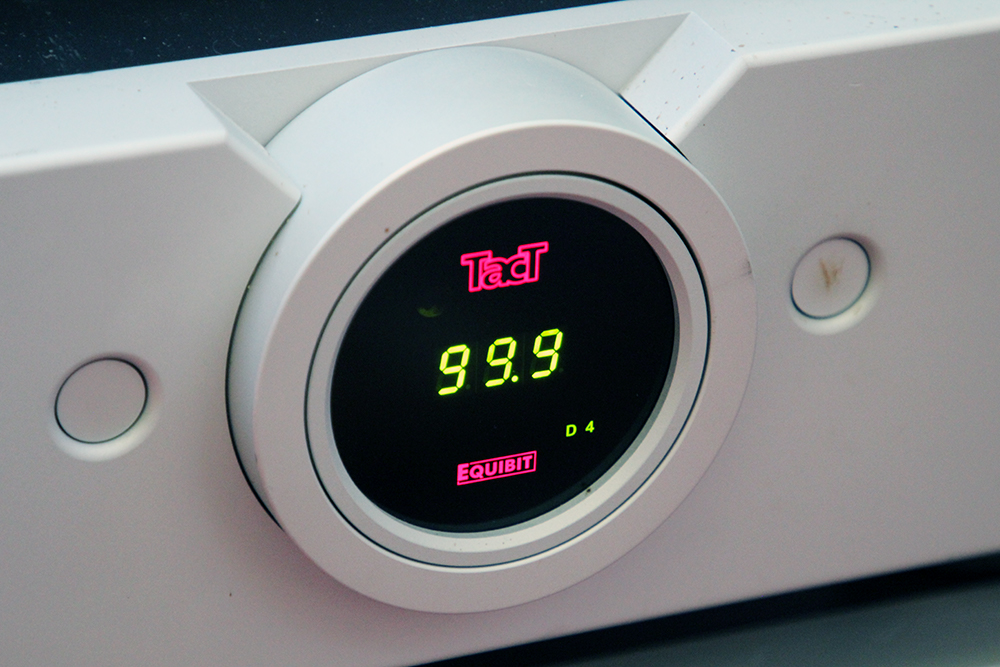 Still, Ambiophonics is currently available through a number of digital third-party computer apps, some of which cost as little as $7. It’s also available from a third-party provider as a freestanding processor costing slightly over $100. The technology’s paltry cost is due to more than just Moore’s law. Ralph’s goal with Ambiophonics has never been to make money, and he has generously released the RACE algorithm to the public. According to Ralph, like stereo, Ambiophonics should be free for all to enjoy.

Fast-forwarding to 2019, this was not the first time that Larry and I have visited Ralph. Still, upon entering his home during this most recent trip, I couldn’t help marveling at his art and vintage record player collection, which includes a rare 1920s wind-up Victrola Credenza. We could have taken in Eastern tapestries and been regaled with Ralph’s stories of audio and world exploration for days, but we were there first for the 3D audio and second for the brownies that Ralph’s wife kindly baked for us. 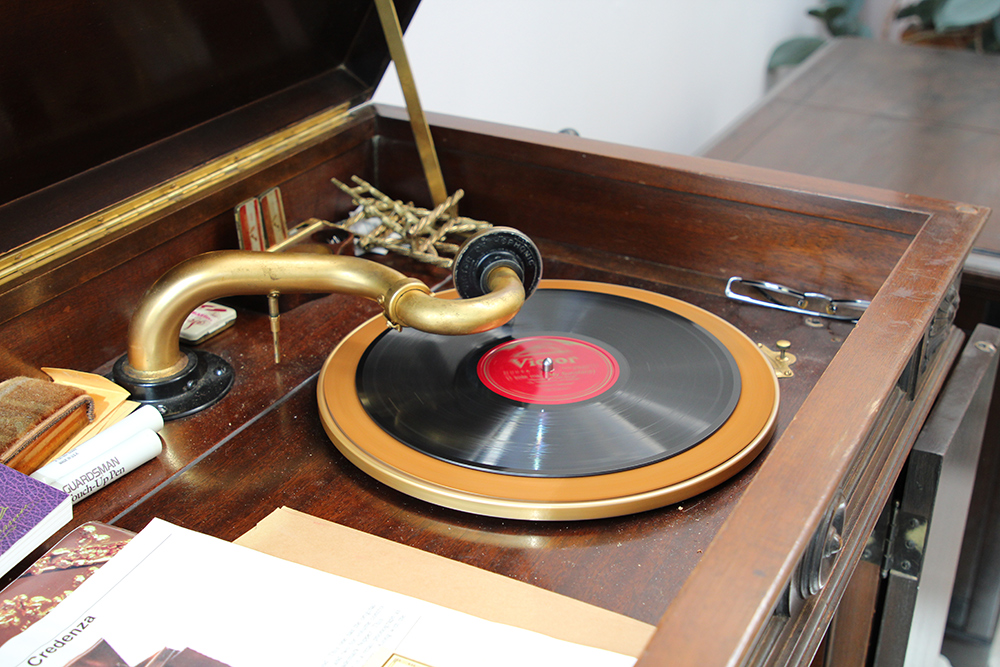 Ralph’s home has four high-end audio systems. His main system, with 24 channels, contains TacT digital components, an ELP laser turntable, an Oppo disc player, and 14 pairs of Sound Lab, Acoustat, and MartinLogan electrostatic speakers. The system resides in a three-story atrium-like room with an 80' ceiling. Its speakers are carefully arranged on each story to surround the listener. Undoubtedly, the room and system are sights to behold for both the eyes and ears! 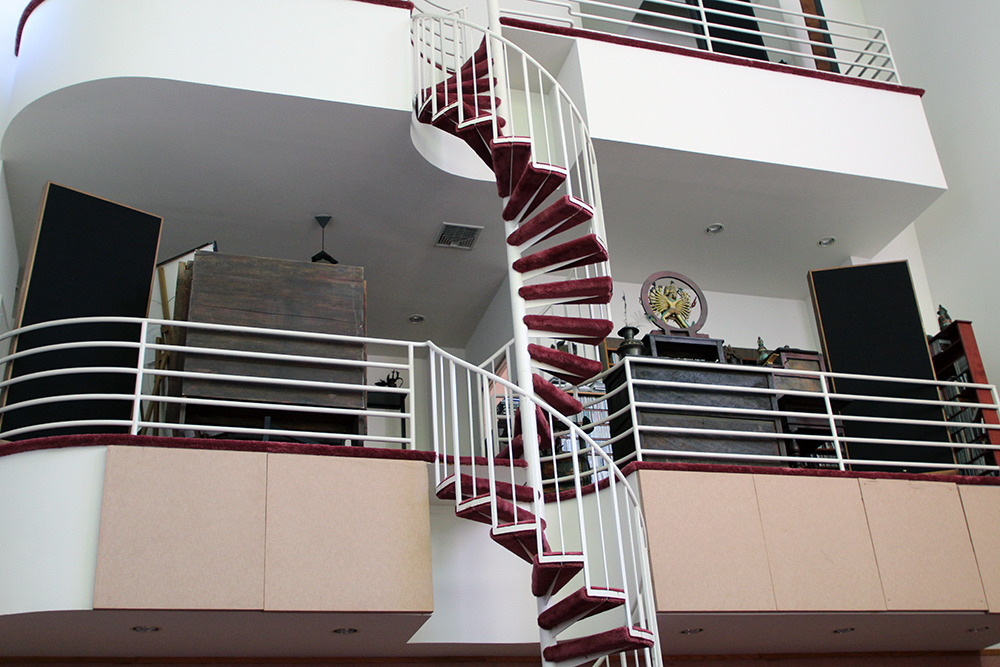 The Ambiophonics demonstration was stunningly effective. Palpable 3D voices and instrumental sounds moved within a 360-degree radius of the listening position. When called for by the recording, those sounds sometimes seemed to be only inches from my ear. Further, the soundstage extended well beyond both the walls and speakers to an extent simply not possible with traditional stereo playback systems. What was also striking was the way in which the system recreated hall ambience and reverberation. Traditional systems simply cannot as effectively recreate the room or venue in which the recording was made -- and the difference is not subtle. 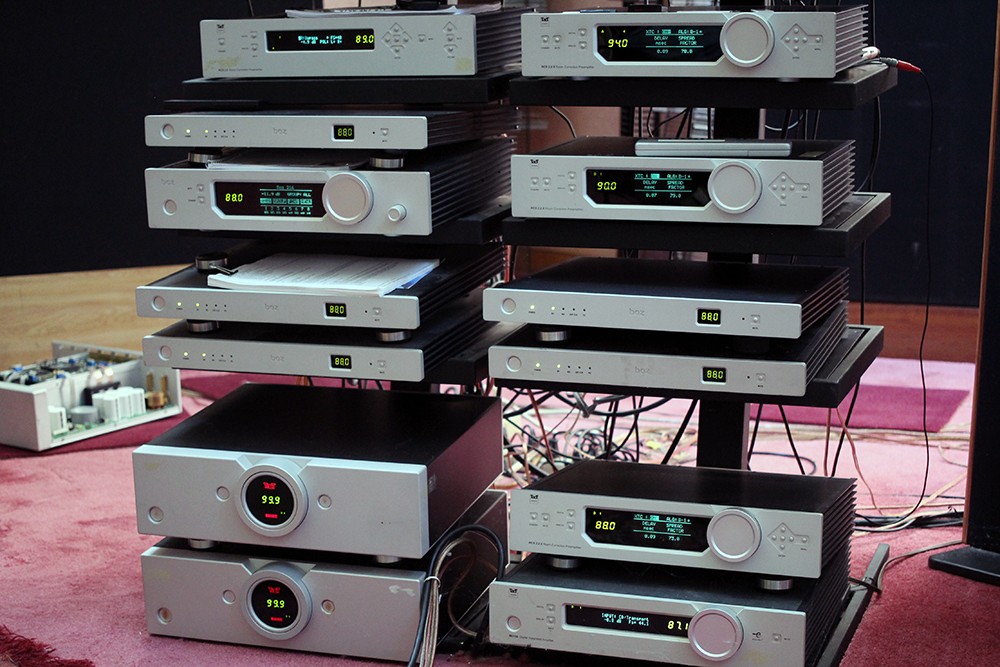 The demo indicated that Ambiophonics is much more effective and operationally linear than is Carver’s Sonic Holography, which I have also auditioned. I’ve also heard numerous high-end multichannel systems, all of which couldn’t hold a candle to what we heard. Furthermore, Ambiophonics’ cost-to-performance ratio is through the roof. Yes, 24 channels of audio should be highly immersive. However, as Ralph later showed us, Ambiophonics works in the simplest audio systems. 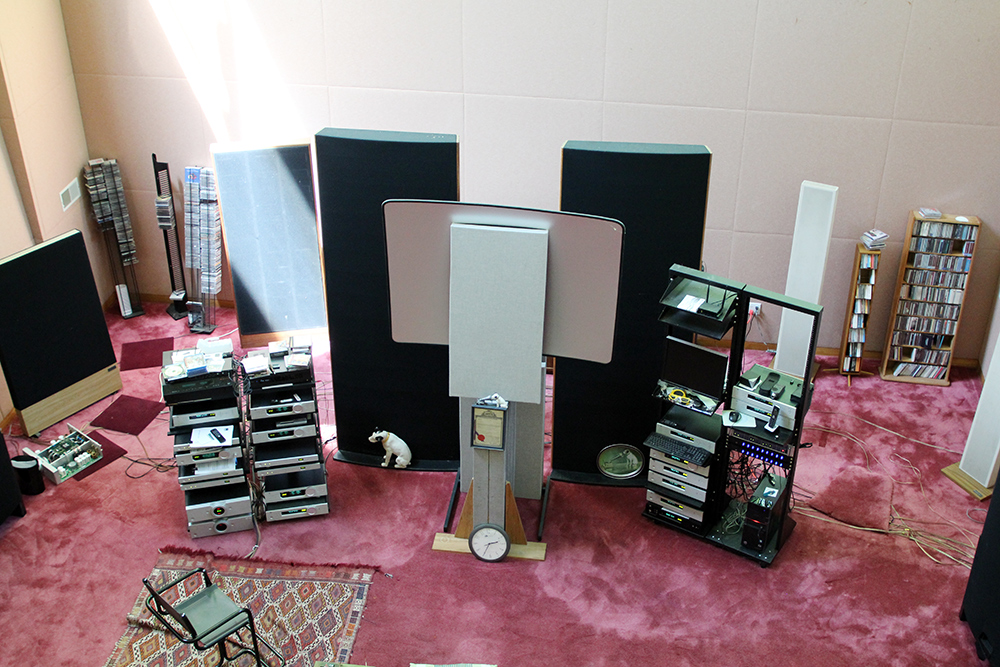 Larry and I immensely enjoyed our visit with Ralph, who is one of the most interesting people that either of us have met. My review of the Theoretica Adio will be out soon. Not to give too much away, but that component, which costs tens of thousands of dollars, aims squarely for the high-end market. If it sounds like Ambiophonics is a bargain, that’s because due to Ralph’s generosity, it is. Undoubtedly, it is the most cost-effective way for audiophiles to experience IXTC technology, something which every audiophile should do.