For whatever reason, it’s been only recently that I developed a profound appreciation of Joni Mitchell’s music. I was therefore looking forward to the “Linn Lounge Presents -- Joni Mitchell” event, held on March 2 at Accent on Music, which is located in Mount Kisco, New York, about an hour north of New York City.

Linn’s website disclosed what the event’s attendees could expect:

Rediscover [Mitchell’s] truly iconic sound in exceptional quality on a handcrafted and precision-engineered Linn music system. You’ll be guided through the stories of her life in a music documentary-style presentation, performed live in front of you. Mitchell defined an era with her unparalleled infusion and imagination and just like her music, her story is timeless.

In order to accommodate demand, the event was held twice on the designated day. When I arrived at Accent on Music with my friend Tony West, of Adirondack Audio and Video, we found that it was located right off Mount Kisco’s quaint main drag. Bearing smiles, food, and spirits at the store’s reception area were, among others, Katie Wilson, Linn’s Event and Partnerships Manager, who had traveled from Linn’s headquarters, located in Glasgow, Scotland; and Alma and David Wilson, Accent on Music’s owners. After an informal reception, we headed into the store’s largest listening room. 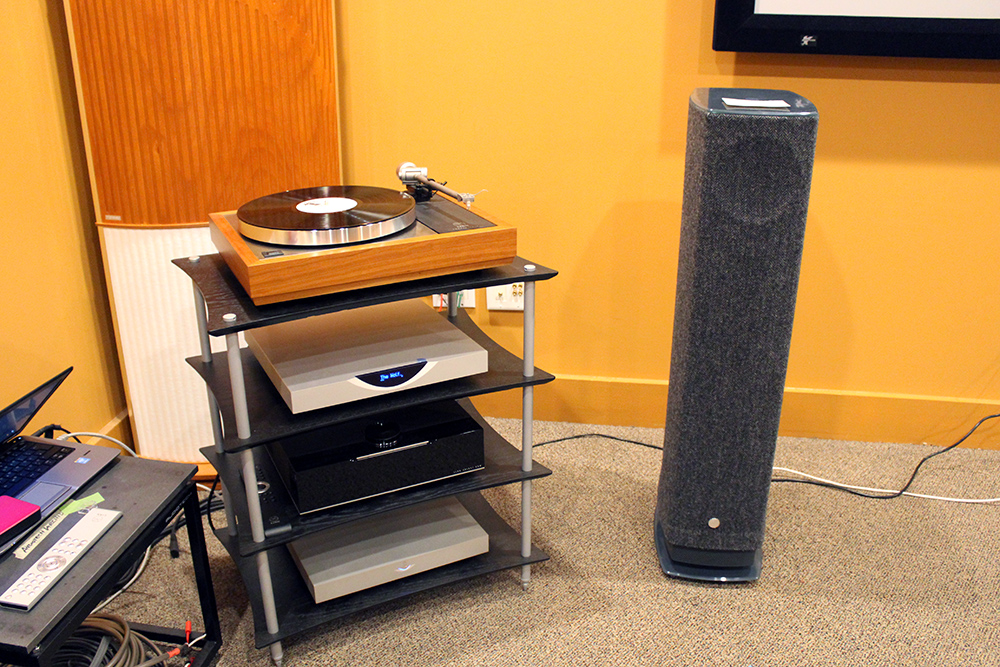 I took notice of the all-Linn playback equipment: a Sondek LP12 turntable using the company’s top-of-the-line Kandid cartridge, Radikal turntable motor control and power supply, Ekos SE tonearm, and Urika phono stage (collectively, $25,260 USD, $4780 for the Kandid alone); a Klimax DSM digital-to-analog converter, preamplifier, and network player ($23,375); a pair of 530 Exakt speakers ($15,000 per pair), each of which utilizes a 300W internal amplifier and a CAT5 cable that connects to the Klimax DSM; and Linn Silver interconnects ($400 per 1.2m length).

A cool thing about the 530 Exakt speaker is that it’s available with a black or white cut-glass stand and top plate, and there is a selection of Scottish wool exterior “Fabriks.” Covered in Granite Harris Tweed Fabrik, the event samples looked plain to my eyes. But after checking Linn’s website, I discovered the many available colors and artistic designs. All I could say was, Wow! In the Kaliedo Splatt or Grand Blotch Damask Fabriks, for example, the speaker is a stunningly gorgeous work of modern art. 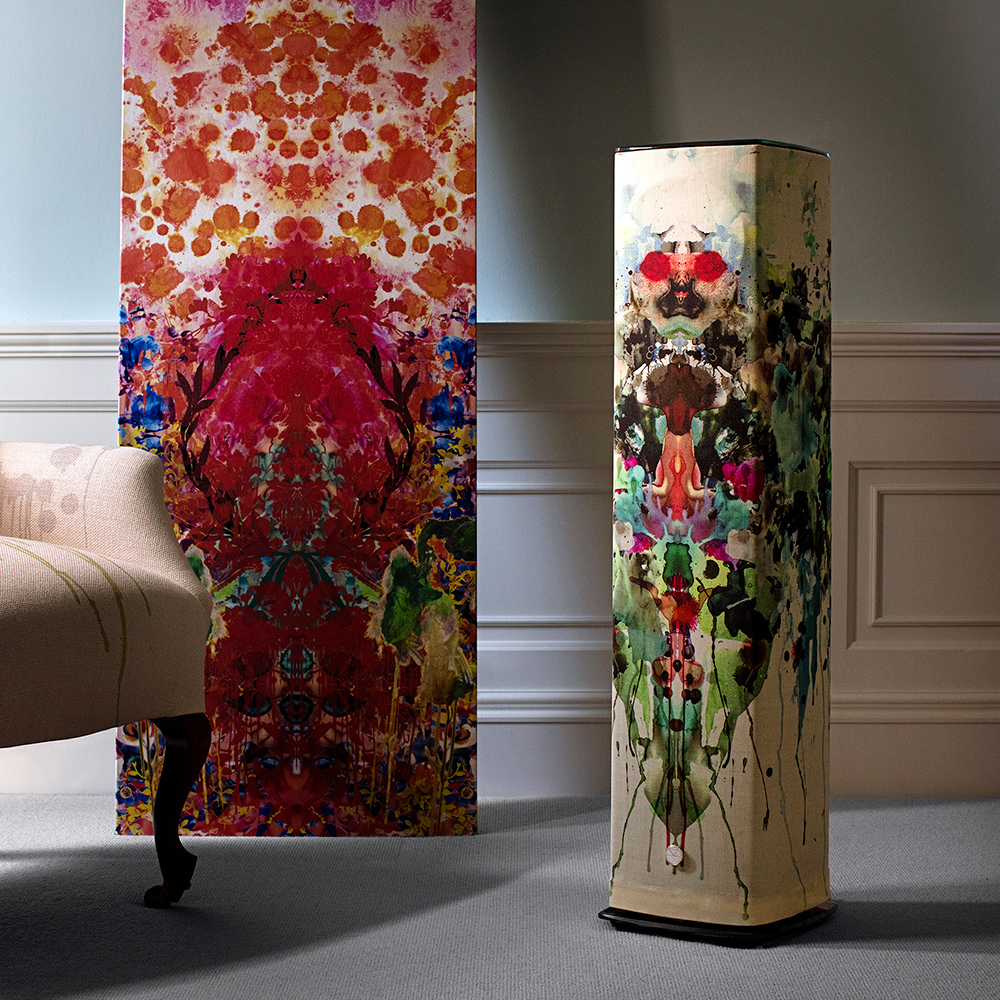 During the event, the Klimax DSM streamed the source signal from Qobuz. The systems used in many of the audio demonstrations that I have recently attended have streamed from either Qobuz or Tidal. Apparently, a growing number of manufacturers feel that the performance offered by these services is high enough to show off their gear.

Initially, David Wilson welcomed the group, noting that Accent on Music has operated in the same location for over 30 years, providing a comfortable place for audiophiles to listen to music without high-pressure sales tactics. David stated that Katie would narrate the story of Joni Mitchell’s life, while periodically breaking to play some of her most iconic songs. Also, David announced that a drawing would be held at the event’s conclusion, with two lucky winners receiving either a Neil Young Live at Massey Hall 1971 LP or a card containing a link for a free download of Linn’s 40th Anniversary Collection music compilation. Entry cards were passed around, to be filled out and returned to the front of the room. 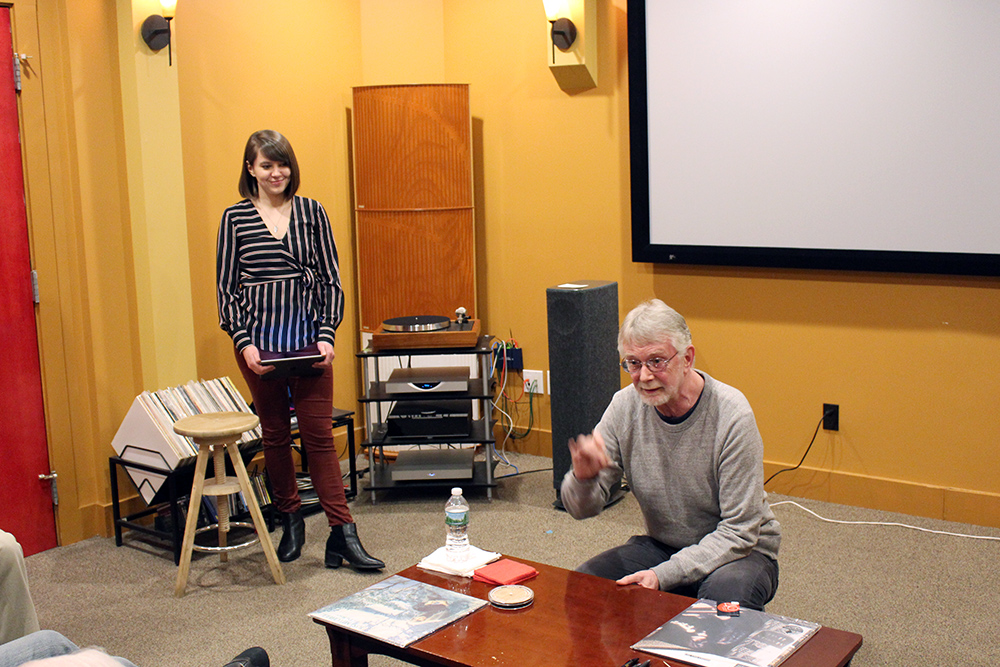 David then handed it off to Katie, who, in her Scottish accent, regaled the group with Linn’s corporate history, which I’ll recap the best I can: In 1973, a newly married Ivor Tiefenbrun, an engineer, went shopping in a small Scottish town at the direction of his wife to buy some home furnishings. While the wife anticipated that Ivan would purchase a lamp, plates, and curtains, he returned with a hi-fi system. However, Ivor was not happy with his new system’s sound and he experimented with its setup. 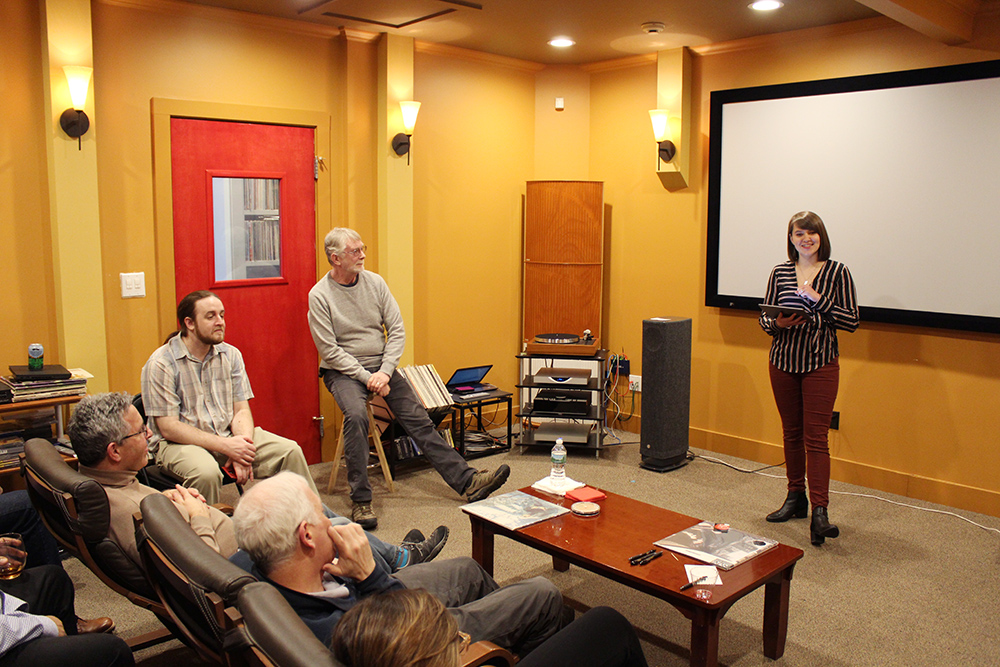 Ivor discovered that moving the turntable from his listening room to an adjoining room improved the system’s performance, since the speakers’ output was no longer being fed back through the turntable and contaminating the source signal. This surprised him since the conventional wisdom at the time dictated that speakers overwhelmingly, if not exclusively, determined a stereo system’s sound quality.

This experience caused Ivor to design the Sondek LP12 transcription turntable (the archetype of the ’table used at the event), which is resistant to room-based acoustical feedback. Ivor also designed the LP12 to be upgradeable for future technologies, a novelty at that time. Incredibly, Linn can update any LP12 to current specs. 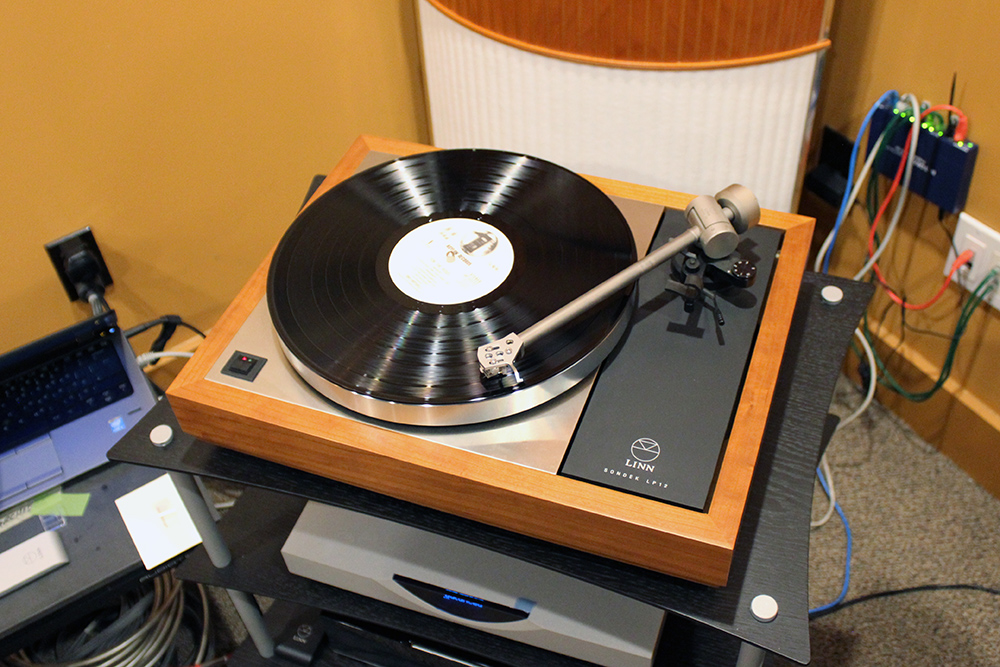 Katie then discussed how, under the stewardship of Ivor’s son Gilad Tiefenbrun, Linn has expanded further into electronics and speakers, particularly into cutting-edge digital gear. She discussed Linn’s Space Optimisation technology, by which the company’s network music players utilize Internet-based digital filters to correct the signal for each room’s physical characteristics (e.g., dimensions, as well as wall and floor material). Further, she noted, these products receive periodic firmware updates through the Internet that bring performance improvements and new features.

Katie also discussed how Linn’s Exakt technology, used in the 530 speaker, allows for the output of each of the speaker’s drivers to be optimized. According to Katie, even under the most precise and demanding manufacturing methods, no two driver samples perform identically. Through this technology, the performance of the 530’s drivers are measured at the factory and logged into the cloud. Based on those measurements, instructions are sent to the speaker to adjust frequency timing to account for minute performance deviations that, although within the drivers’ manufacturing tolerances, could nonetheless impair sound quality. Fast-moving high frequencies are slowed so that they arrive at the listener at the same time as slower-moving low frequencies.

Katie stated that the Exakt technology eliminates phase and harmonic distortion. The technology even works with non-Linn speakers, whose drivers are timing-corrected based on a preexisting performance model. 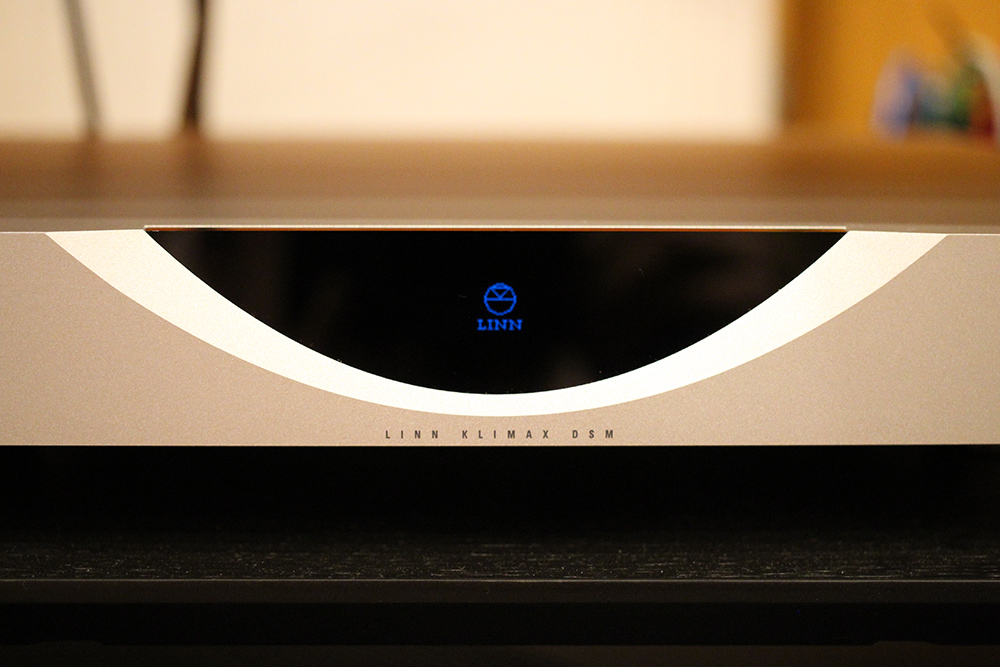 By now, the crowd was eager for the start of the Joni Mitchell retrospection and to hear the Linn system. Katie began by explaining that the nine-time Canadian Grammy Award winner, whose musical career began in the mid-1960s, was the voice of a generation. Leading an often-troubled life, Mitchell was bedridden with polio as a child, experienced a grave sense of loss after giving up her child for adoption in 1965, and suffered a brain aneurism in 2015. Of course, Mitchell’s troubles often found their way into her music.

During the demo, Katie played the following Mitchell songs: “Blue,” “Night in the City,” “Big Yellow Taxi,” “A Case of You,” “Car on a Hill,” “Hejira,” and “Both Sides, Now.” The sound created by the Linn system was not characterized by hyper detail and pinpoint imaging. Rather, it was large, effortless, emotionally charged, and organic. I noticed how beautifully the system revealed the change of Mitchell’s voice as the ravages of time and her cigarette habit gradually coarsened it and altered its tonality. During the playback of “A Case of You,” the performance was so emotionally powerful that a front-row attendee at the event cried. 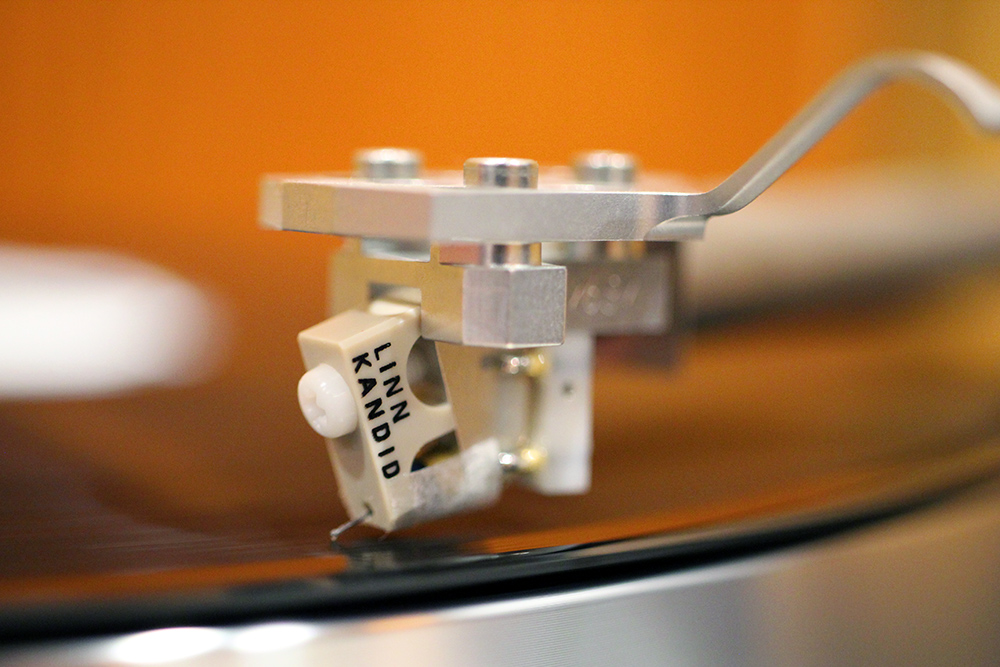 Finally, after all eyes were dried, two lucky drawing winners were selected. Unfortunately, neither Tony West nor I won.

Did Ivor’s better half really place sufficient trust in his decorative judgment to let him select the couple’s home furnishings? Based on my life experiences, I can’t be sure. However, I do know that we spent a great afternoon listening to Joni Mitchell’s music on a fantastic Linn audio system. Count me in for the next Linn event, please.