There’s no question about it: it’s kind of lame to call the presser for a new loudspeaker an “event.” A plywood box with some extruded-aluminum and fancy drivers doesn’t get the blood flowing quite like the introduction of automotive stalwarts, such as Ferrari’s V8-powered sports car models, Porsche’s iconic 911, or BMW’s benchmark-setting M3. But in the case of the Bowers & Wilkins 800 D3, the newest flagship of the company’s legendary 800-series, the “event” moniker strikes me as warranted. 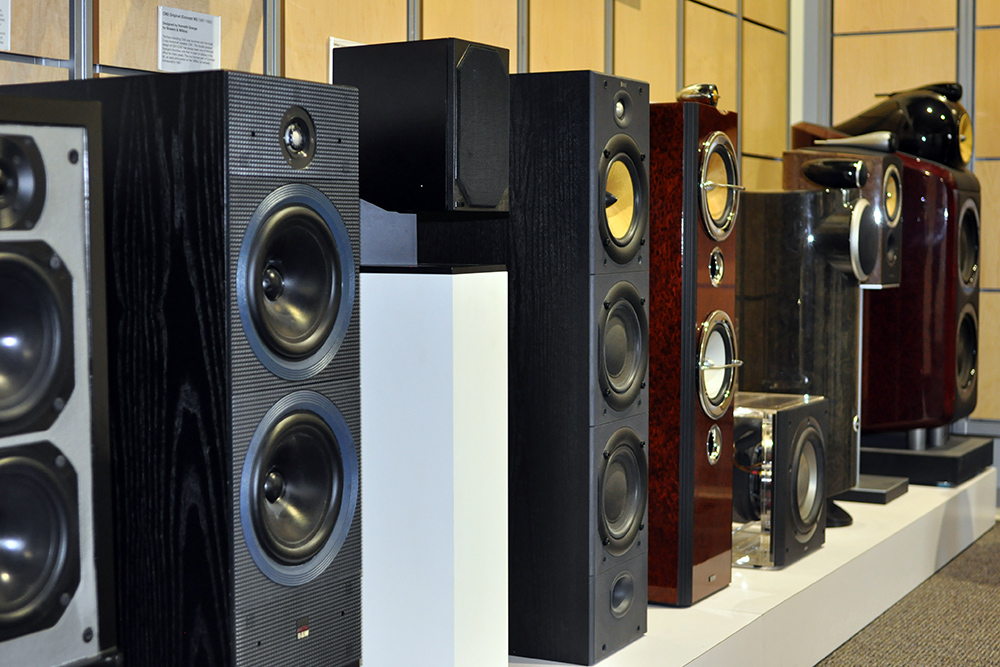 A bit of B&W history

I grew up ogling my older brother’s mid-’80s Matrix 801 Series 2 loudspeakers, with their “flying” top-mounted tweeters; signature yellow Kevlar midrange units; and massive, cubed bass sections. The 801 S2’s boxy design eventually gave way to the stunning Nautilus 800 series, with curved wooden cabinets, and in the case of the line-leading 801 and 802 models, spherical midrange enclosures. They were, and to my eyes still are, beautiful objects. It should be noted, though, that the 801 was a bit . . . stout. While my brother’s older, boxier model sported a 12” bass driver, the Nautilus 801’s woofer was a massive 15” in diameter, making for a fat, bottom-heavy appearance. B&W eventually introduced the Signature 800, which substituted the 801’s 15” woofer for a pair of 10” units. The result was a speaker with all of the 801’s bass output, but with the pleasing proportions of the wildly popular 802. The 800 would go on to outsell the 801 by a 3-to-1 margin. The 800 line had a new top dog. 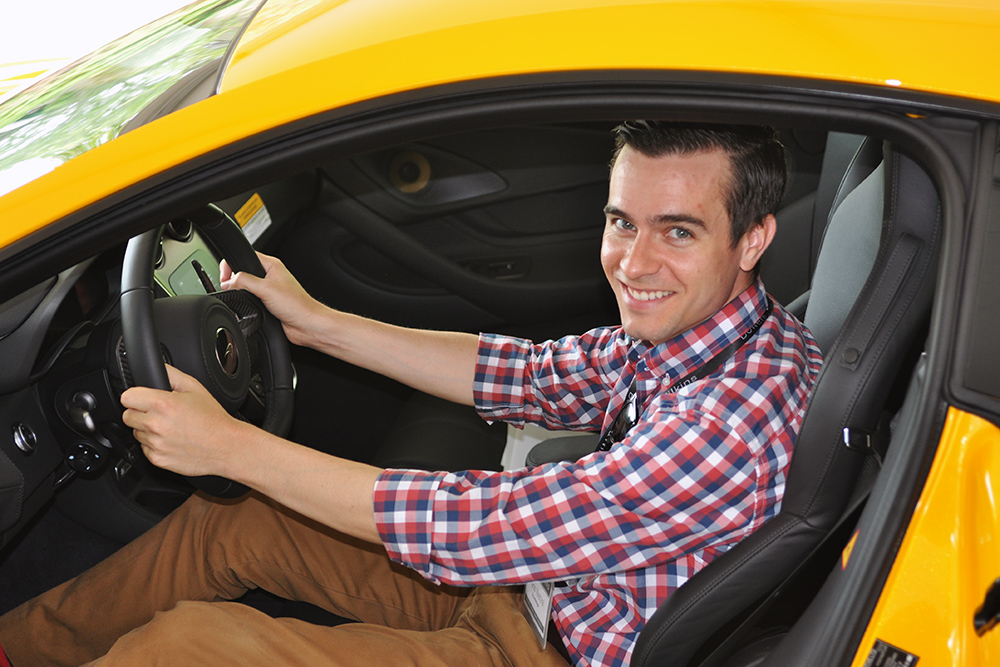 Hans in the McLaren

B&W does things right. Stepping out of my taxi at B&W’s North American headquarters in North Reading, Massachusetts, located just outside of Boston, I was greeted by a McLaren 570S supercar, BMW 7-series sedan, and Volvo XC90, each fitted with a Bowers & Wilkins sound system. I would be lying if I said that the dark-colored BMW and Volvo garnered the attention that the McLaren did, especially in light of the fact that it was clad in the same vivid shade of papaya as McLaren’s vintage Can-Am racing cars. It was a light, pleasant appetizer to the presentation about the new 800 D3.

Andy Kerr, senior project manager at Bowers & Wilkins, kicked things off and told the assembled members of the press that the 800-series flagship was actually ready to ship at the time the rest of the new 800-series was announced, which was back in the fall of 2015. With the expected initial demand for the 802 and 803 models, B&W made the decision to hold off on releasing the 800 D3. All of the 800-series models are made in a 150,000-square-foot factory that operates 24 hours a day, six days a week. They can manufacture 350 cabinets a week. 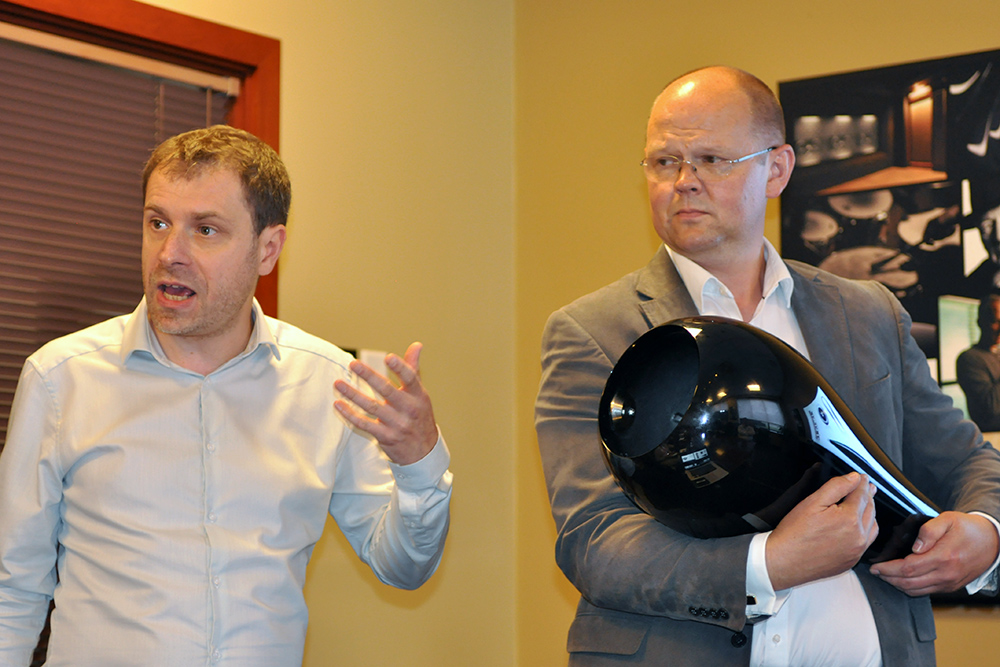 Martial Rousseau, B&W’s Head of Research, was then introduced, and he explained that research on the new 800 series began in 2007. The Nautilus-inspired tapered tweeter, as well as the “Turbine” midrange head, are fashioned from solid aluminum. The tweeter chassis serves as a heatsink for the 1” diamond tweeter -- an identical unit to the one used in the 800 D2 -- with the profoundly heavy Turbine chassis housing four tuned-mass dampers made of nickel-plated brass. The silver-colored Continuum midrange driver is a departure from the yellow Kevlar diaphragms used in prior generations of the 800 series. Rousseau explained that while the tweeter and the 10” bass drivers operate pistonically, the midrange unit in the three-way design is responsible for too wide of a frequency range to operate without breakup. Instead of trying to eliminate cone breakup, he mused, B&W’s engineers opted to try and control them in a euphonic manner. Rousseau did not tip the company’s hand on what material the Continuum cone is made of, but did say that it possessed high mechanical-damping properties, and was similar in weight to the old Kevlar cone, but with much smoother frequency response and breakup characteristics.

Each 800 D3 has two 10” Aerofoil bass drivers. Each cone has a syntactic foam core covered in a thin skin of carbon fiber. Interestingly, the woofer has a variable-thickness cone, with the diaphragm getting thinner the closer you get to the outside of it. A neodymium magnet is used for each woofer, which helps to account for the relatively low weight of the drive unit. Moreover, the 10” diaphragm is incredibly rigid, exhibiting zero flex of any kind. 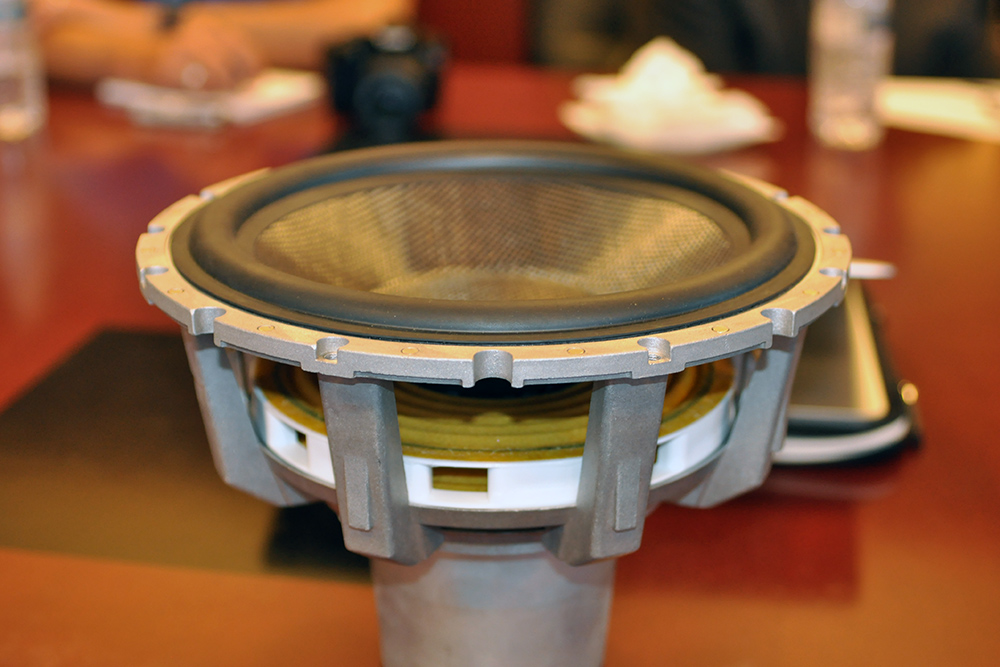 Up close, the 800 D3 is a visual feast. The build quality is, I think, the very best one can expect for a $30,000-per-pair loudspeaker (the retail price in the United States). The grain of the Rosenut wood finish (gloss black is also available) looked immaculate, and nicely complemented the black solid-aluminum plinth, as well as the silver finishes of the midrange and high frequency drive units. Around back, there’s the finned brushed-aluminum spine of the 800, which gives it a futuristic, mechanical vibe. The flared “pods” that surround the 10” Aerofoil woofers, and act as a buttress for the rest of the cabinet, do spoil the otherwise clean, curved lines of the 800 D3, but I admit to being quite smitten with the overall proportions of the 48” tall, 212-pound beast. 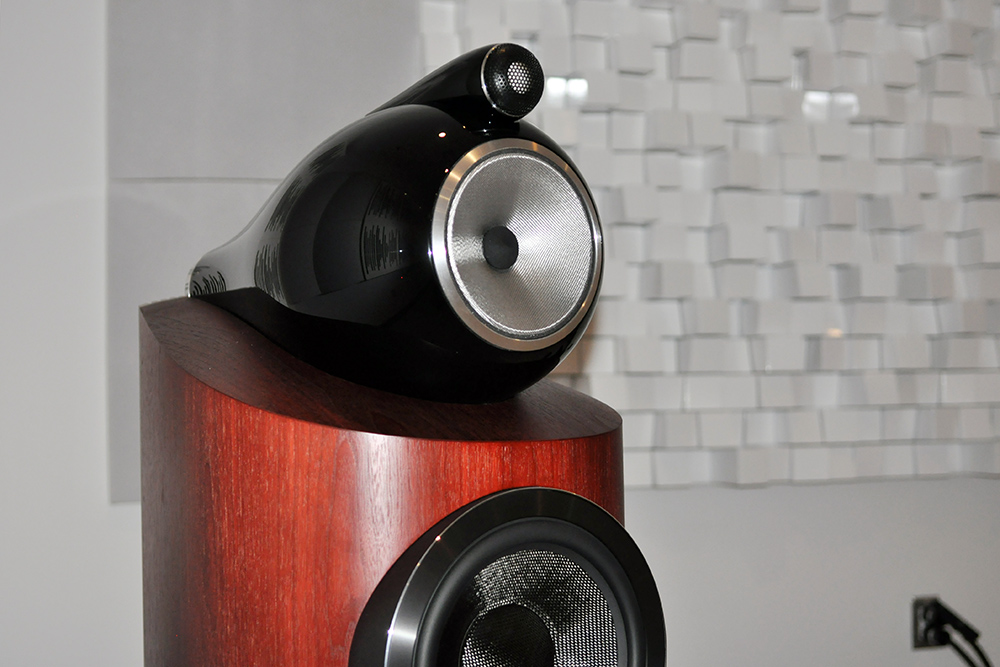 It’s all about listening, though, and the company’s 1100 employees, working in 12 different countries, should be proud to know that the 800 D3 is a special loudspeaker. The B&W folks lined up two listening sessions for the flagship: a stereo setup in a phenomenal, acoustically decoupled listening room, and a five-channel (5.0) system, each of which used a stack of Classé electronics, while the latter also featured an Oppo Digital Blu-ray player for multichannel musical content. While it’s always difficult to get a bead on a single component while listening in a foreign environment to music you’re not familiar with, I think I was able to pick up what the 800 D3 was throwing down.

Andy Kerr queued up five pieces, starting on the quiet, subtle end of the spectrum, and ending with Deadmau5’s “Seeya.” The 800 D3s had no problem pressurizing the large stereo listening space with the electronica track, and I was struck by something about their bottom end. Gone was the fulsome, robust, whomping bass response of older 800-series floorstanders; in its place was a tighter, more honest facsimile of the musical performance. On “Seeya,” I noticed that there was little in the way of overhang, but an awful lot of low-frequency texture and attack. 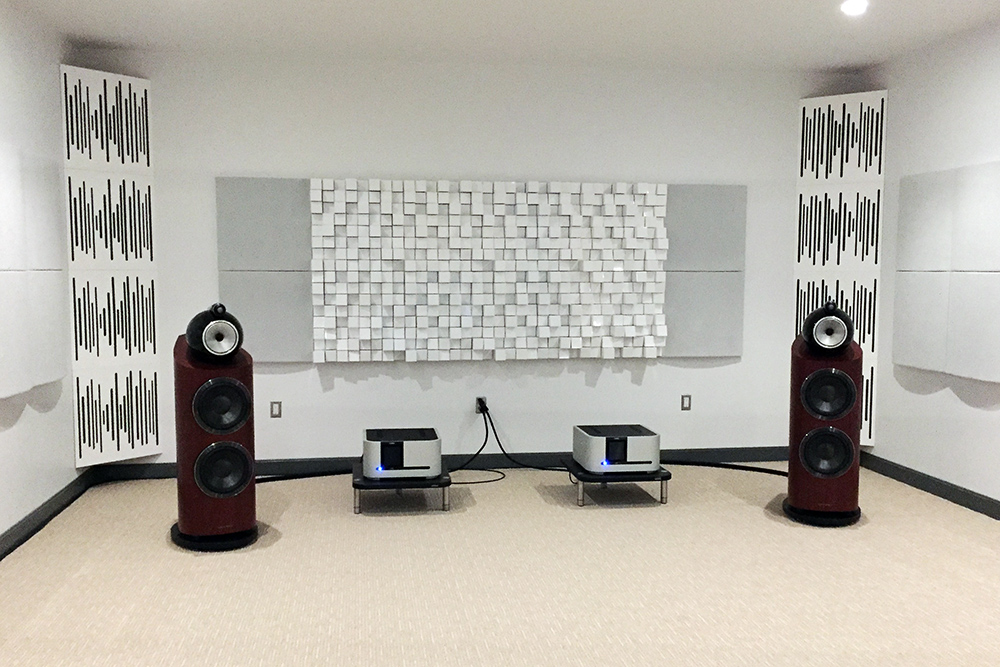 This suspicion was confirmed when I transitioned into the surround-sound room. The instantly recognizable opening to Mussorgsky’s “Great Gate of Kiev,” from Pictures at an Exhibition, as performed by the Chicago Symphony Orchestra, was staggering both in its scale, as well as its composure. The 800 D3’s diamond tweeter certainly added a dose of top-end sparkle to the piece, casting an alluring sheen to the string section, while the lower registers were accounted for with surprising athleticism. I was shocked that the five 800 D3s in the room, with a total of ten 10” drivers, did not overpower the room with an excess of bass energy. On the contrary, the drum thwacks in the final expression of the main theme were delightfully taut and impactful.

The Allman Brothers Band’s “Done Somebody Wrong,” from The 1971 Fillmore East Recordings, by contrast, exercised a richer, heartier tonal palate, and the B&W flagship duly obliged. While the sheer scale of the surround-sound recording was impressive, with strong lateral soundstaging, and pronounced depth, it was the vocals that caught my attention: they were clean and concise, but possessed a hint of bloom, weaving together accuracy with that intangible dimensionality that leaves so many other statement-level loudspeakers sounding a bit sterile by comparison; this is a loudspeaker that tugs as much at your soul as your ears. 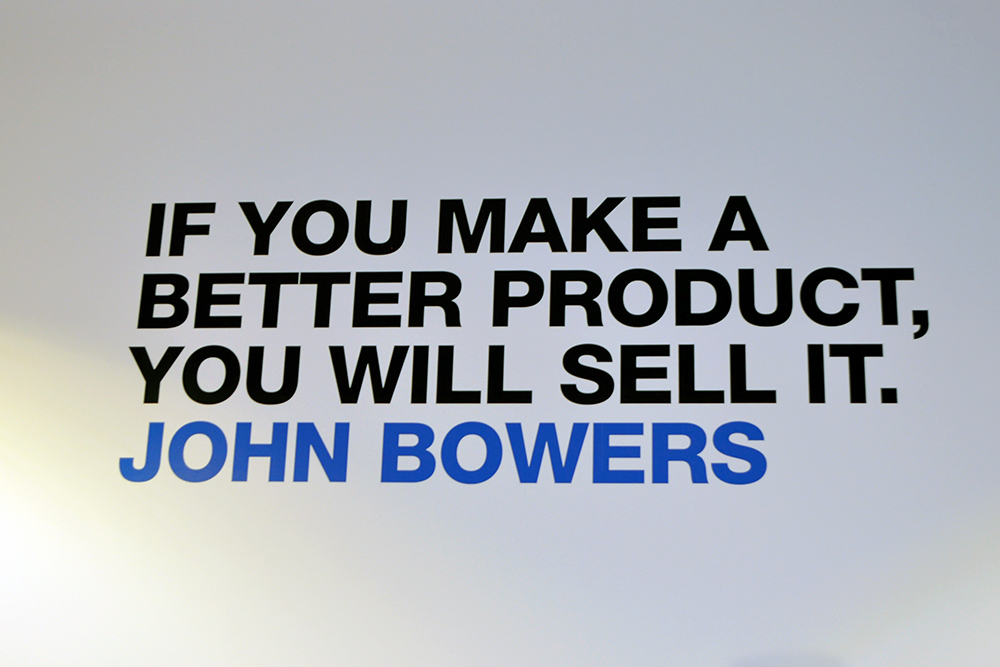 And that’s really the point, isn’t it? If you’re going to spend $30,000 on a pair of loudspeakers, having mere respect for the talents on offer simply isn’t enough. The 800 D3 delivers on the lofty expectations that late cofounder John Bowers would have expected of a product bearing his name. I reckon that he’d scarcely believe what the newest baby in the Bowers & Wilkins lineup could do back when he launched the original 801 in 1979. Happy 50th, sir. It’s with characteristic English modesty that I can comfortably conclude the following about the 800 D3: quite good, that.