The Voice That Is: An Afternoon with Bricasti Design, Zesto Audio, and John Marks

I’ve been to a couple of dealer events over the years, and they’re all pretty similar. There are free snacks and usually alcohol. Two or three rooms might be set up for group listening, with a couple of talking heads -- sales guys or someone of note from the manufacturer -- giving a brief spiel, before talking through several pieces of well-trodden jazz music. Questions are encouraged, with brief answers the norm.

At the turn of the millennium, that would have been enough to motivate a few wallets to open and some hard plastic to be swiped. Nearly 20 years later, though, this sales pitch isn’t enough. Consumers are savvier yet flightier, with service seeming to count for less and less. Now it’s all about tire kicking and where to get the lowest price, with the human connection -- and perhaps even the musical connection -- getting lost in the process. 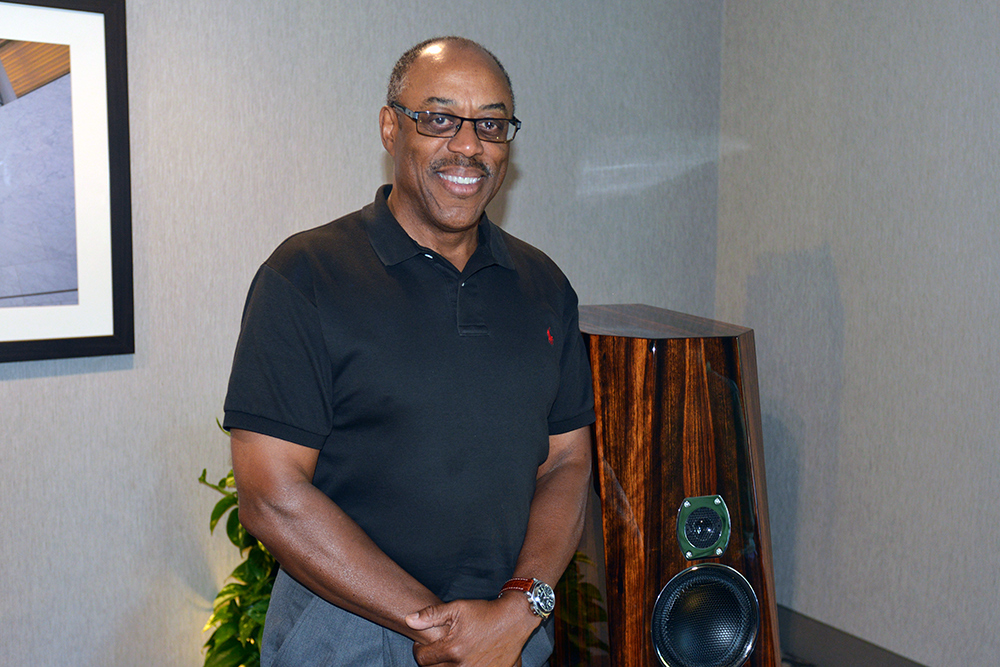 Doug White, owner of Philadelphia-area dealer The Voice That Is -- named after an album from jazz singer Johnny Hartman -- does things a bit differently. At a two-day event on June 22 and June 23, 2019, running five to six hours long each day, White queued up extended sessions with industry veteran John Marks, as well as the founders of Bricasti Design and Zesto Audio, to provide attendees with a more in-depth and personal hi-fi experience. With warmth and a genuine, easy smile, Doug teed things off by explaining what drives him -- a love of music and a passion for artful engineering -- and offering insight into his own hi-fi experience, both as a consumer and working as an associate at a local dealer. His goal, he noted, was not to simply sell audiophiles a box or two, but to understand and deliver on a given client’s tailored needs and tastes. 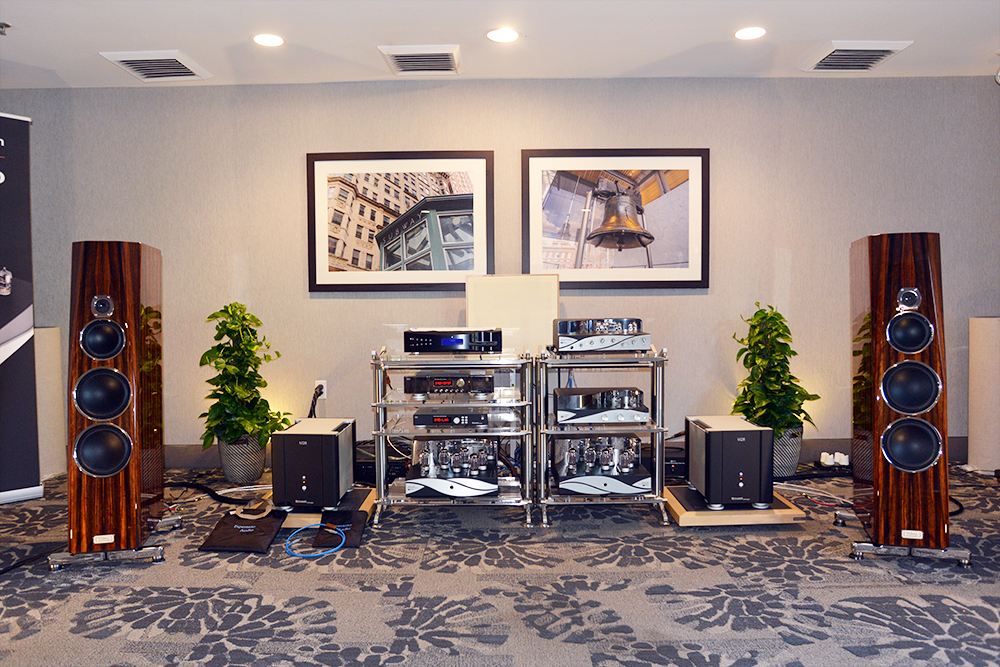 John Marks, formerly of Stereophile, was the first guest to present. Over the course of six musical selections, he discussed the genesis of the Compact Disc format, as well as his time as a producer and audio engineer, and his expertise in designing S/PDIF audio cables under his Esperanto Audio banner. His $600 Esperanto Blue and $1600 Esperanto Black BNC-terminated cables both sounded superior to my ears when compared to a cable that he had reviewed for Stereophile back in the day. Each exhibited a greater sense of air and spatial definition compared to the older interconnect, with the Black demonstrating more in the way of flow and ease than the more affordable Blue. 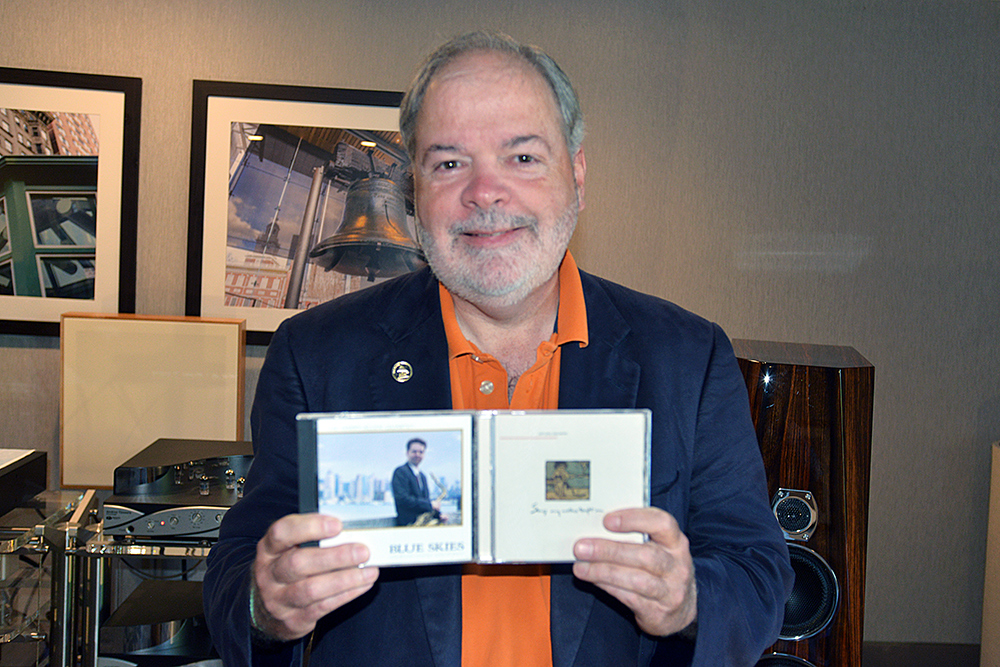 Of particular interest was a demo of Antonín Dvořák’s “Songs My Mother Taught Me,” originally performed in 1982 in New York City’s Church of the Holy Trinity, and remastered and released under Marks’s label in 1994. The first version had been recorded on a silver aluminum/polycarbonate CD. The recording was warm and rich, boasting gobs of texture. It sounded great and uncommonly engaging for a CD, no doubt a testament to both Marks’s work and the remastering efforts of Bob Ludwig, the winner of quite a few Grammy Awards. Marks then traded the silver disc for a gold version of the same recording that had been twice cryogenically treated. I was dubious, but he explained that aluminum’s crystalline structure (as used in the silver disc) contrasts with the inherent smoothness of gold (as used in the gold-colored disc), and that cryogenically treating the disc will allow it to behave like a polyolefin. This, in turn, helps the laser in a CD transport to more accurately read the disc, with fewer associated errors. I’ll be the first to admit that I’m a bit backed up on my material science reading, so I can’t speak to the veracity of the underlying scientific principles of this practice. What I can say, however, is that the gold disc sounded demonstrably better than the original, with a clearer, more extended treble and a more focused overall sound.

Marks concluded the presentation with a 24-bit/96kHz high-res file of “Gabriel’s Oboe,” the main theme from the film The Mission. It was originally released on the First Baptist Church in America’s God Makes a Path, a CD issued in 2012 featuring oboist Katie Scheele. I’d be curious to hear the original Red Book CD, because the high-resolution file version sounded sensational. Check out The Tannhäuser Gate for all things John Marks related.

Brian Zolner, Bricasti Design’s CEO and lead designer, was up next. The ex-Harman International and ex-Lexicon man considers himself a musician first, not an engineer, one with a predilection for classical and orchestral music. Like the genesis of so many audio companies, Zolner’s creations were originally for himself, and close friends in the recording industry who appreciated the delayed reverb functionality developed through his work at Harman. Quickly gaining traction, he launched Bricasti in 2004. 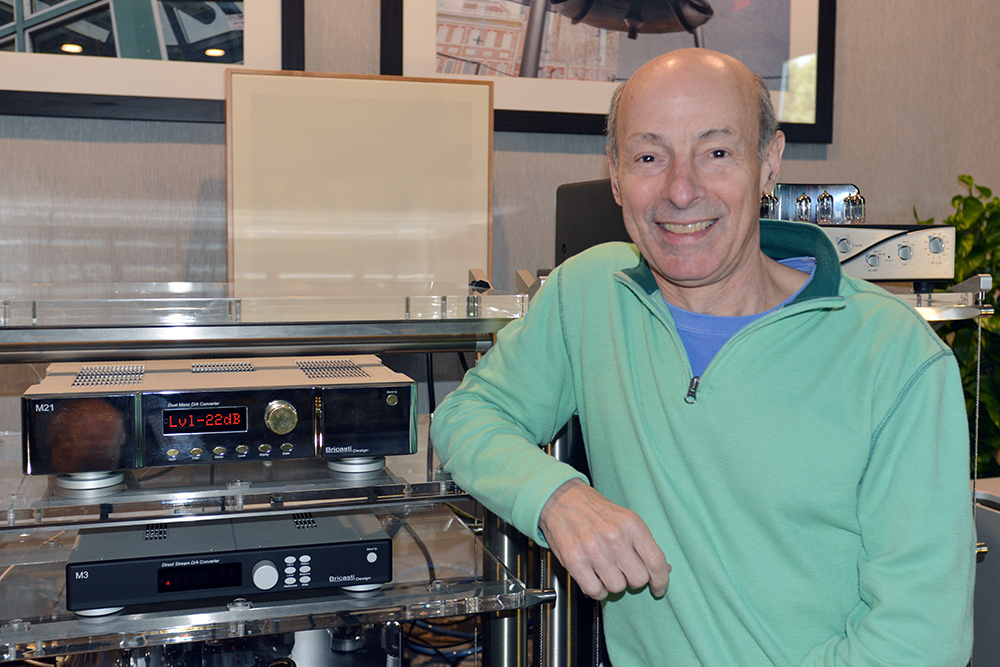 “We strive to take the art forward,” he explained as he dove into the impressive architecture of his line-leading M21 DAC. The M21, like the rest of Bricasti’s gear, is fully balanced throughout. The M21 uses one Analog Devices AD1955 DAC in each channel, with an analog volume control; buyers may opt for an optional ladder DAC in lieu of the more traditional (and en vogue) sigma-delta chip. An unusual feature of the Bricasti DAC is its dedicated -- and built from scratch -- one-bit DAC for DSD playback. The majority of high-end DACs go with modern sigma-delta chips that handle DSD-to-PCM conversion and call it a day. It’s an easier, less expensive approach that would probably be sufficient for most audiophiles’ needs. Zolner is an exponent of consumer choice, however. Don’t decide for listeners; rather, provide buyers with the choice and leave it up to them. So if you funnel DSD material through the M21, you can select whether it gets routed through (and converted by) the sigma-delta chip or processed natively by his bespoke one-bit circuit for optimal signal integrity from input to output. 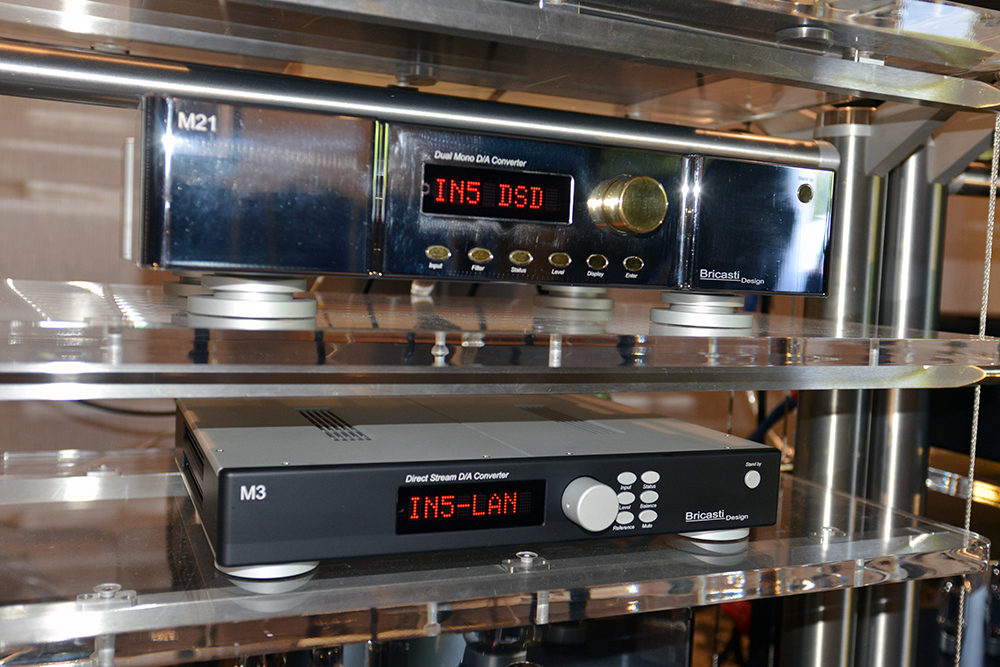 DSD played a large role in Zolner’s presentation, since many of the engineers he knows (and whom he supplies professional-level electronics to) prefer to work with DSD. Cut after cut revealed the M21 to be one of the more analog-sounding DACs I’ve heard in recent memory. It married high levels of transparency with a liquidity and ease that belied the ones and zeros that flowed through its complex circuitry. More interesting to me than its absolute performance was how different some DSD tracks sounded when played through the Analog Devices DAC, versus the one-bit native DSD decoder. Echoing my own personal experience with DSD, the pure DSD signal path afforded a sophisticated sound across multiple music samples. There was a smoothness to the treble, and there was a meaty, textured midrange that sounded almost vinyl in its presentation. Funneling the same tracks through the sigma-delta DAC, and converting them to PCM, produced sound with greater urgency and alacrity. Brass and percussion took on a more extended, sparkling quality that I happen to like. No, the tracks didn’t possess the same smoothness and apparent tonal density of the DSD, but I heard a greater sense of air and space that I know I wouldn’t want to give up for anything. And that’s the beauty of Bricasti’s newest DACs: You can tailor their sound, courtesy of their two built-in DAC circuits and multiple included filters, however you prefer. SoundStage! will hopefully get a review sample of Bricasti’s newest DAC -- the $5500 M3 -- in at some point over the next few months.

Last up in this marathon dealer event was George Counnas, of Zesto Audio. Like Brian Zolner before him, it quickly became clear to me that Counnas is a hardcore engineer. He’s an electrical engineer by training, having previously worked at Raytheon in the research and development of navigational systems for aircraft. Counnas learned about tubed electronics during his formative years at university, and this passion has extended through to his product lineup, all of which is tubed. He also had a lengthy career as an audio engineer, working with bands like the Pretenders and INXS, and working live performances in venues from small clubs up to full-size stadiums. Dissatisfied with other tubed gear on the market, Counnas set out to manufacture his own, which he and wife Carolyn (who handles the industrial design) have built in their facility in Thousand Oaks, California. Zesto’s product voicing? “Low fatigue,” he said matter-of-factly. “The trick is getting [our gear] to sound detailed enough without having it sound fatiguing.” 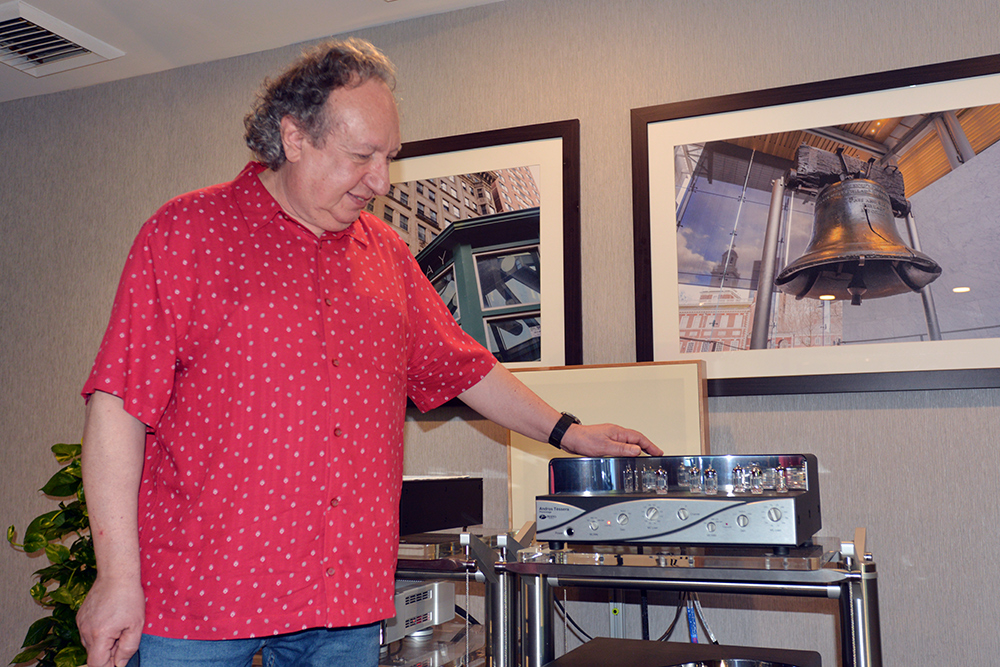 Counnas gave a detailed talk on some of the nuances of how vacuum tubes work, as well as the intricacies of cartridge loading, while discussing his newest product, the Andros Téssera phono stage. The dual-mono design is a feature-rich beast. Armed with four 12AX7 and two 12AU7 vacuum tubes, the Téssera supports moving-magnet and moving-coil cartridges. MM impedance is adjustable between 47k and 68k ohms, while the phono stage includes a ten-position MC load knob that allows listeners to tailor the impedance from 50 ohms all the way up to 1000 ohms. It was fascinating to hear Counnas adjust the output in real-time, with the increased and decreased dynamic range (depending on the setting) resulting in a profound change in the character of Doug White’s analog rig. I can see this being a real boon for guys trying to dial in their cartridge. The Téssera also has an outboard power supply, which is nice to see at this price point. Veteran writer Jason Thorpe should be getting an Andros Téssera phono stage in for review on SoundStage! Ultra in the next month or two. 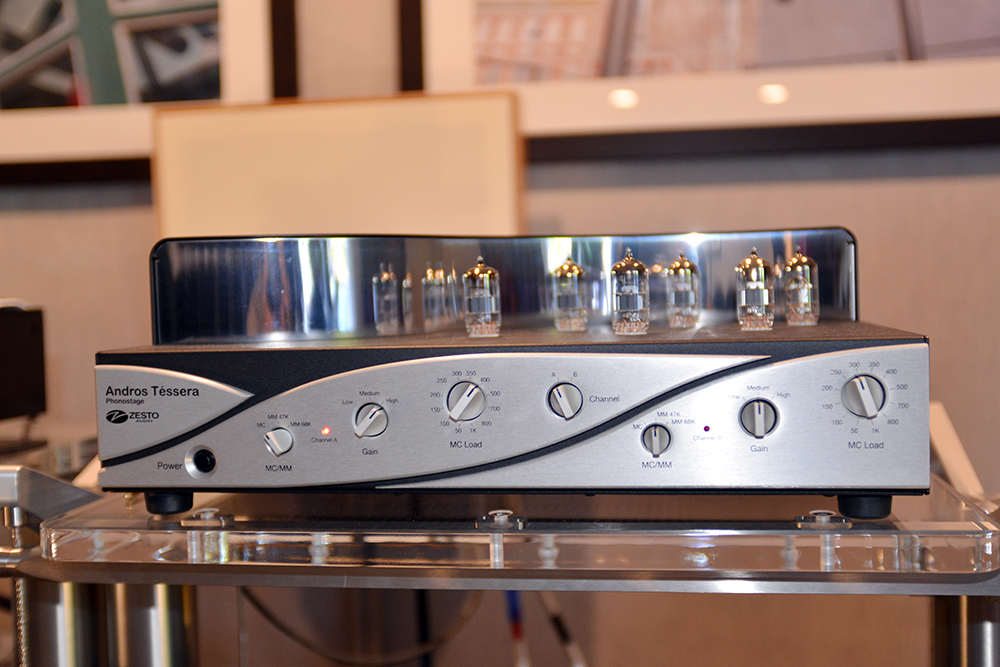 Zesto’s monster Eros 300 monoblock amps were in play for Counnas’s demonstration. And man, their 150Wpc class-A output sounded fantastic, with the analog setup sounding warm and vivacious -- quite different from the Bricasti system playing just a few minutes before. Each chassis uses six KT88 power tubes and a pair of 12AU7 signal tubes; Counnas chose the KT88s because of their reliability and availability. All of this, combined with the amps’ autobiasing and choke power supplies, makes them an appealing option for customers interested in statement-level tubed monoblocks.

As I departed the event, nearly six hours after first arriving, it clicked for me what Doug White was trying to do. So many manufacturers just make hardware, with little knowledge or appreciation for what goes into the engineering and mastering process of the music that their equipment reproduces. Each of Doug White’s presenters had robust engineering and music industry experience, and there’s something to be said for having a holistic understanding of music, from its very genesis to the media its distributed on, and finally to the electronics that help reproduce it. If that kind of expertise and experience can bring listeners even one iota closer to the music that stirs our souls, then they’re worthy of serious consideration.