Being cool isn't really a matter of choice. It's one of those things that one either has or doesn't. Clothing, style, surrounding company -- each of these can certainly add a little luster to the patina, but they merely serve to adorn one's intrinsic character with a bit more flair. Sooner or later, true nature will reveal itself. This thought crossed my mind on April 29 as I made my way south from New York City's Penn Station to the meatpacking district, en route to Sonus Faber's intimate press event for its new Chameleon line of loudspeakers. 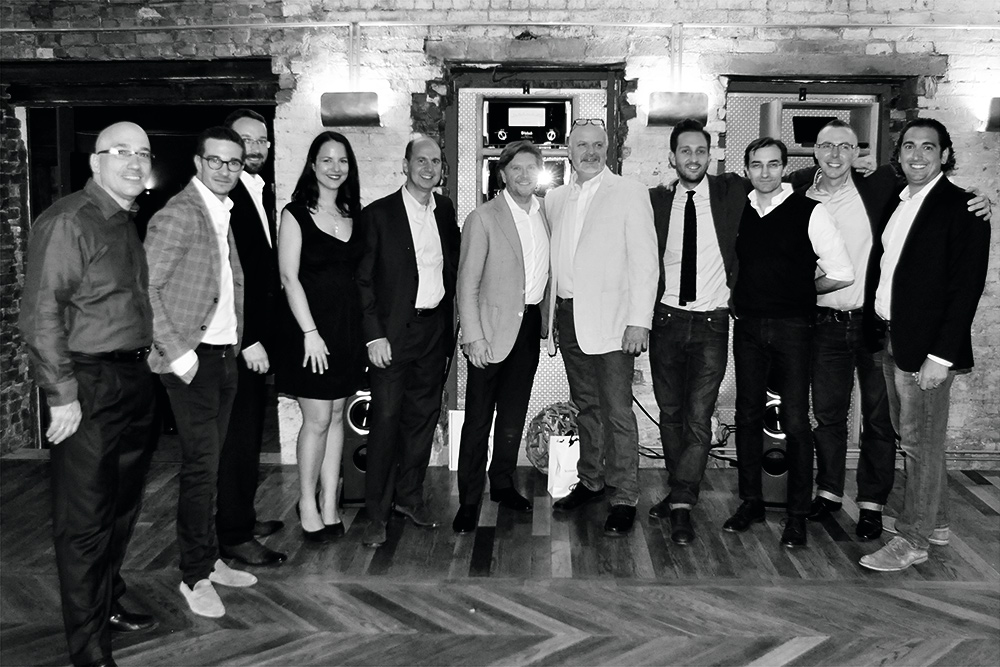 I arrived at the open-air Gansevoort Market, did a quick walk around the various food stalls in search of a sign with the Italian company's distinctive logo, and came up empty handed. Already a few minutes late, I wandered back outside, did a quick 360, and spotted an unmarked doorway with "58" in small print right next door. I climbed the steps and emerged into a cozy lounge just dark enough not to feel self-conscious, yet illuminated with sufficient candlelight to give the atmosphere a warm, inviting glow. Exposed brick complemented the parquet floor, with framed butterflies on one wall and a McIntosh audio system on another, flanked by Chameleon T ($1999 USD per pair) tower speakers, the only active display in the room. A few static pedestals demoed the other Chameleon models: the B bookshelf speaker at $899/pair, the C center-channel for $549, and the various user-replaceable colored side panels. 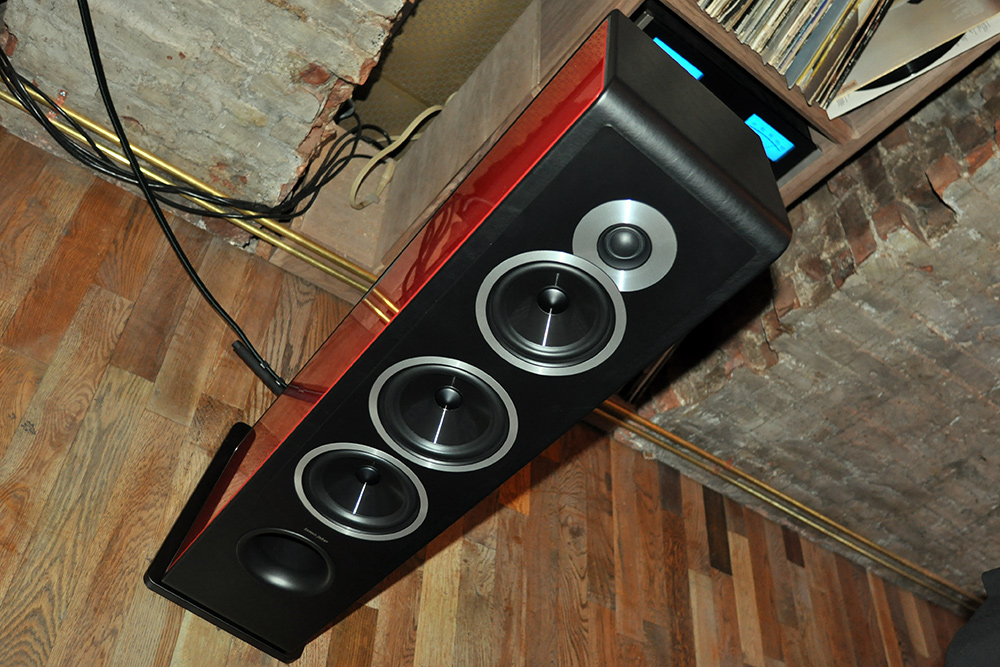 Eschewing the traditional audiophile presentation of a new loudspeaker model, one laden with technical details about frequency response and that ever-elusive notion of "musicality," the folks from Sonus Faber kept it short and sweet. Chameleon is something a bit different; in fact, it's almost anti-audiophile in nature. It's intended to attract a younger, non-audiophile audience that has little interest in specifications and anechoic measurements. You know, normal people. 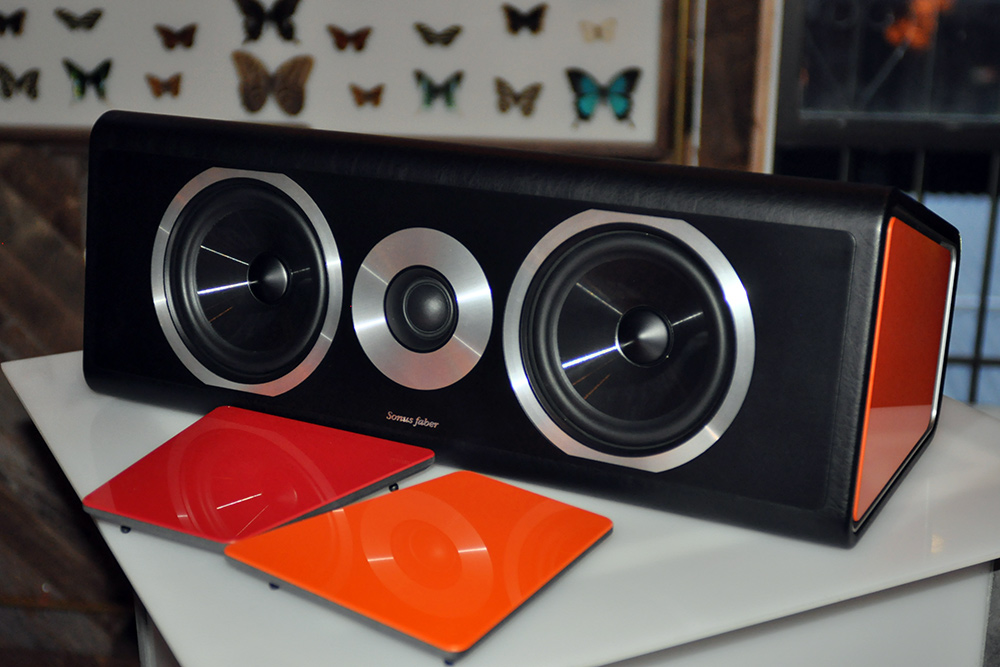 All three models are made in Italy, and clad in copious amounts of supple leather. Every driver in Chameleon is unique to the line, with surrounding aluminum trim giving the three models a clean and understated look -- promotional pictures do not do these justice. Mounting bolts or screws are nowhere to be seen on the models' front baffles. The colored side panels are substantial, but easy to un-mount and replace. For $55, $180, or $400 you get side-panel sets for the C, B, or T, respectively, allowing buyers to tailor their loudspeakers to their surroundings in whatever manner they choose. Six colors are available at launch, but expect this number to grow rapidly. Chameleon, indeed. 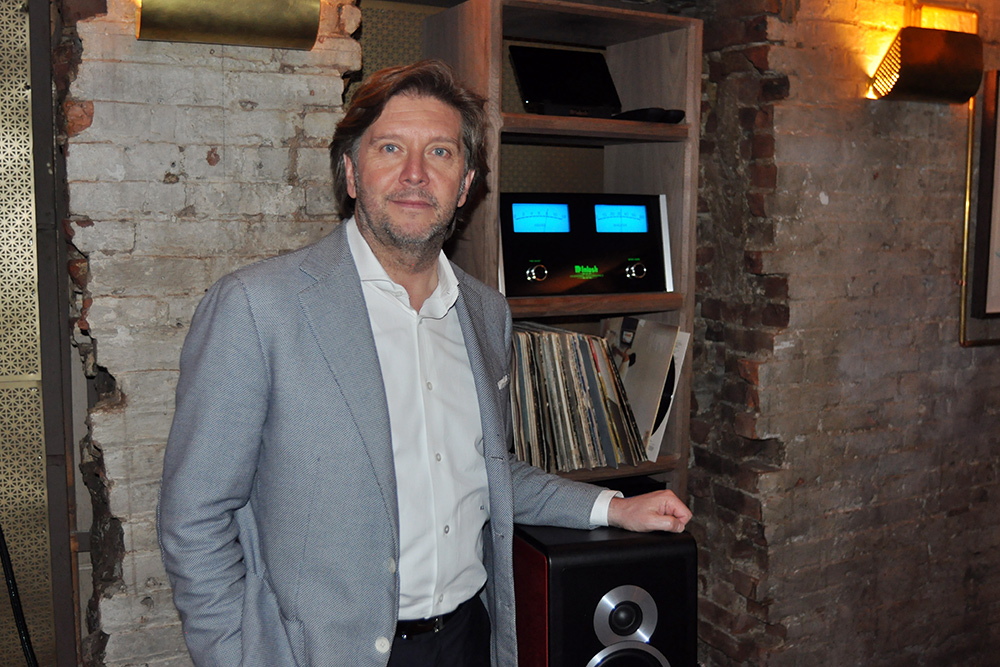 Mauro Grange with the Chameleon T

I chatted at length with Mauro Grange, CEO of Fine Sounds Group (the company that owns Sonus Faber); Fiore Cappelletto, Sonus Faber's director of marketing; and Chris Smith and Brandon Lauer, of sister companies McIntosh and Audio Research, respectively, about what Sonus Faber was hoping to achieve with Chameleon. What's interesting is the lack of high-end pretension associated with this new direction. The line is not about bettering the competition's offerings, or offering a variety of models at myriad price points to find prospective buyers. The company's progressive yet pragmatic goal is not only to make high-end audio palatable to my generation -- the fickle millenials -- but to make it cool. 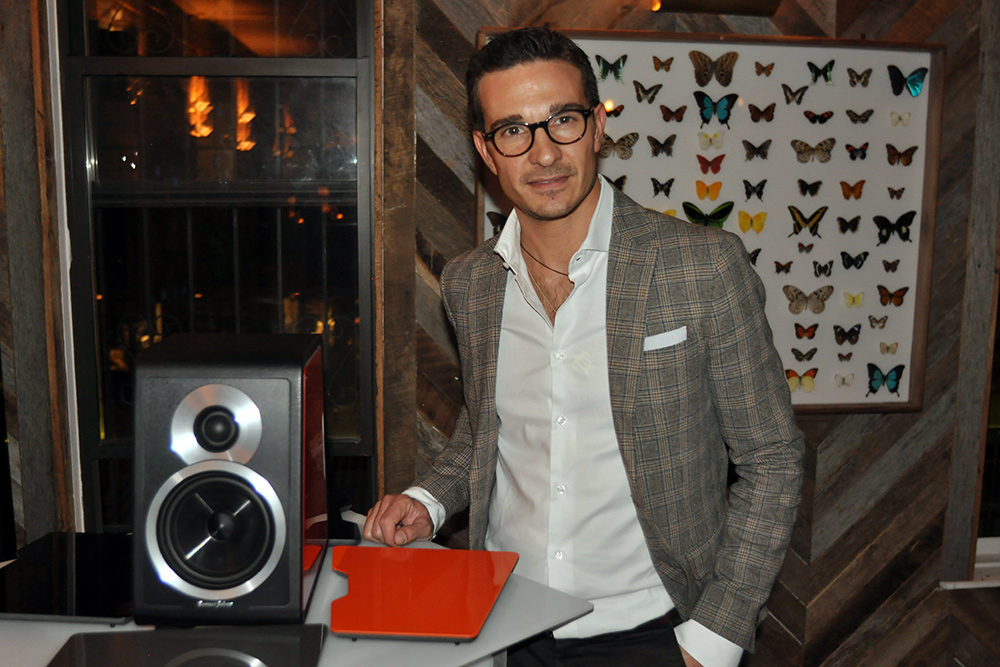 Fiore Cappelletto with the Chameleon B

Cool for a high-end audio manufacturer is a laughably low standard, and that's why Sonus Faber sees Chameleon as an enormous opportunity. The folks who helped make the project a reality for Sonus Faber and the Fine Sounds Group are all young, cultured, and grounded. Industrial design and style dictated Chameleon's parameters because those factors matter to 25- to 35-year-olds who want good sound in a modern living space.

How did the red T towers sound? My ears perked up at a cut from the Tron: Legacy soundtrack being belted out on vinyl, and it sounded as robust and full-blooded as it did on my stereo at home. Beyond that, I have no idea. At worst it's probably pretty good, and at best, bloody excellent for the price. Who's to know in a noisy lounge setting? In some respects, however, it hardly matters. 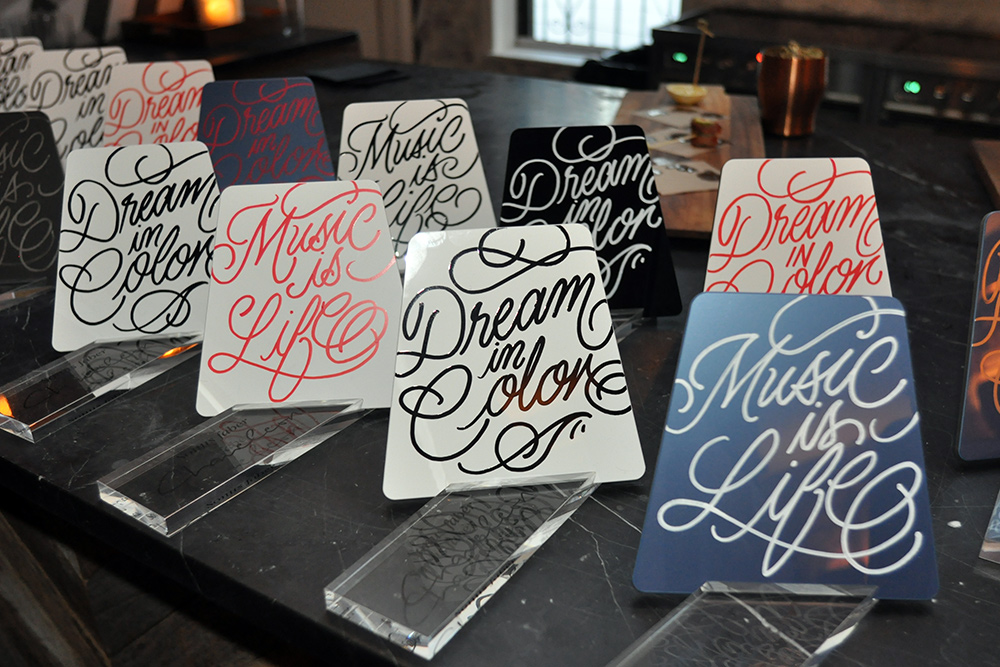 Custom side panels for the press event

Philosopher Arthur Schopenhauer wrote that talent hits a target no one else can hit, while genius hits a target no one else can see. These stylish, leather-bound, handmade, affordable Italian loudspeakers are clearly taking aim at a younger audience. Time will certainly tell whether either noun can be appropriately applied to Sonus Faber's Chameleon line. All I can say is that the Italian firm's philosophy, strategy, and execution are seemingly light-years ahead of the competition.