On November 7 and 8, 2014, MartinLogan demonstrated its new Neolith loudspeaker ($80,000 USD per pair), the finest electrostatic loudspeaker (ESL) the Kansas-based firm has ever produced. I arrived at Overture Audio, located in Wilmington, DE, with high expectations, and was not disappointed. The Neolith, it should be noted, is pretty massive, standing 74.8" tall, and weighing in at 385 pounds. Finished in a beautiful Rosso Fuoco finish that looked automotive-grade, the phenolic resin enclosure was impressive, with a rakish, angular design that smacked of the Lockheed Martin F-117 Stealth Fighter, or possibly something from Automobili Lamborghini. 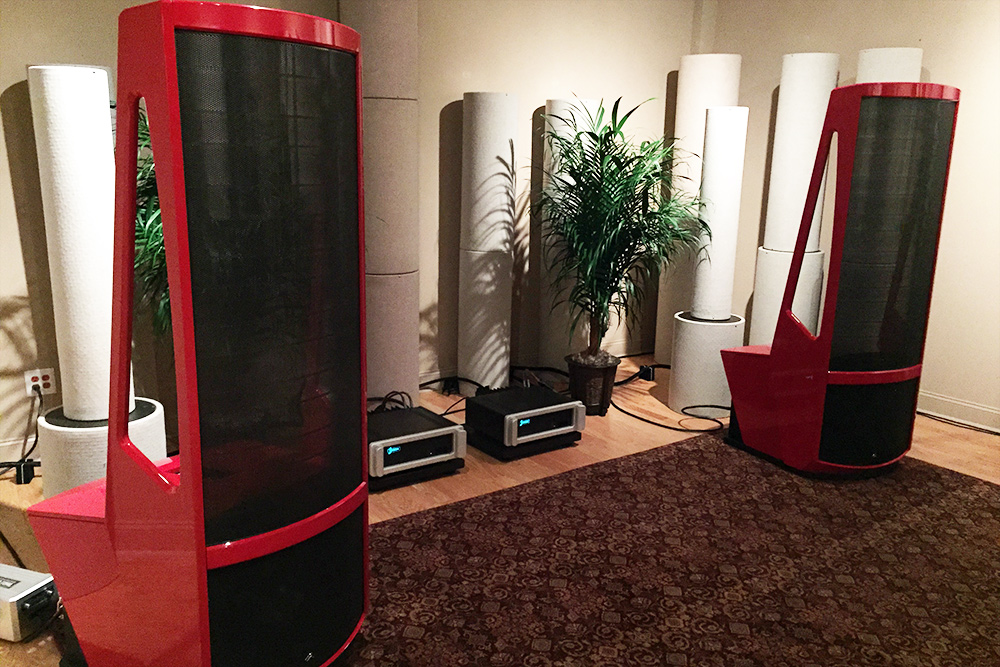 The spec-sheet is mighty impressive, with a frequency response of 23Hz-22kHz, +/-3dB, and a recommended amplifier power rating of 50-1300Wpc at 4 ohms. Predictably, like most every ESL, the 90dB-efficient speaker is not the easiest to drive, with a nominal 4-ohm impedance, dipping to a positively punishing 0.43 ohm at 20kHz. A high-current solid-state amplifier is highly recommended here.

The driver complement is impressive, with a 48" x 22" CLS XStat electrostatic panel for the treble and midrange, crossing over to a front-firing 12" carbon-fiber cone at an adjustable 250Hz-400Hz, which in turn crosses over to a rear-firing 15" aluminum woofer at 60Hz. The smaller bass driver is in its own sealed compartment, while the massive 15" cone is in a ported compartment. Crossover components are of the highest quality, with air-core inductors in the crossover, and dual toroidal transformers for the electrostatic element. Pure-silver WBT NextGen binding posts are on the cabinet's rear, along with bass and distance controls to tailor the Neoliths to any listening environment. Of note, this is a fully passive design. 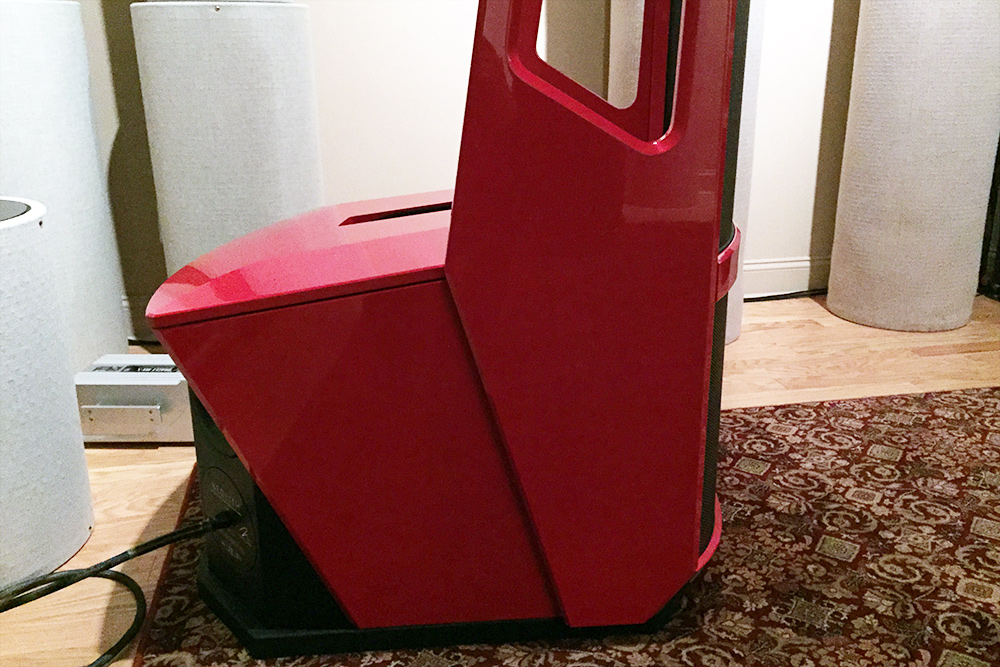 I sat with Erin Phillips (Paradigm's marketing and communications manager), Justin Bright (Paradigm/MartinLogan's director of marketing), Devin Zell (MartinLogan's product manager) and Terry Menacker (Overture Audio's president) as the songs began to flow from the Neoliths via a raft of Spectral electronics. Bluesman Doug MacLeod's There's a Time was the first to feature, and I was immediately struck by his hearty, velvety vocals. The imposing MartinLogans cast an extremely compelling rendition of "Run with the Devil," with copious articulation, while remaining utterly smooth and easy on the ear. The Neoliths imparted terrific speed in attack and transient response, something even the very best traditional loudspeakers can occasionally struggle with. As MacLeod rounded out the song with "If you gon' run with the Devil, you gon' burn," I found myself impressed with the MartinLogans' highly detailed yet totally involving sound.

With broader, more instrumental recordings, the Neoliths put their dynamic chops on display. On the original soundtrack by Bruno Coulais for Himalaya: The Rearing of a Chief, the MartinLogans proved unflappable. Despite big swings of music involving a variety of instruments across the frequency band, the Neoliths were utterly controlled from top to bottom, with seamless driver integration. I was most struck by the bass performance of the MartinLogans, which, despite several music selections, never really seemed challenged in terms of that classic audiophile "subterranean bass." I expected massive bass given the driver complement, but was rewarded not with an excess of bass energy, but rather by excellent speed and tightness. I would never have guessed that a 12" and 15" coned-driver complement would have the quickness to keep up with the Neolith's cutting-edge ESL panel, but I was pleasantly surprised. 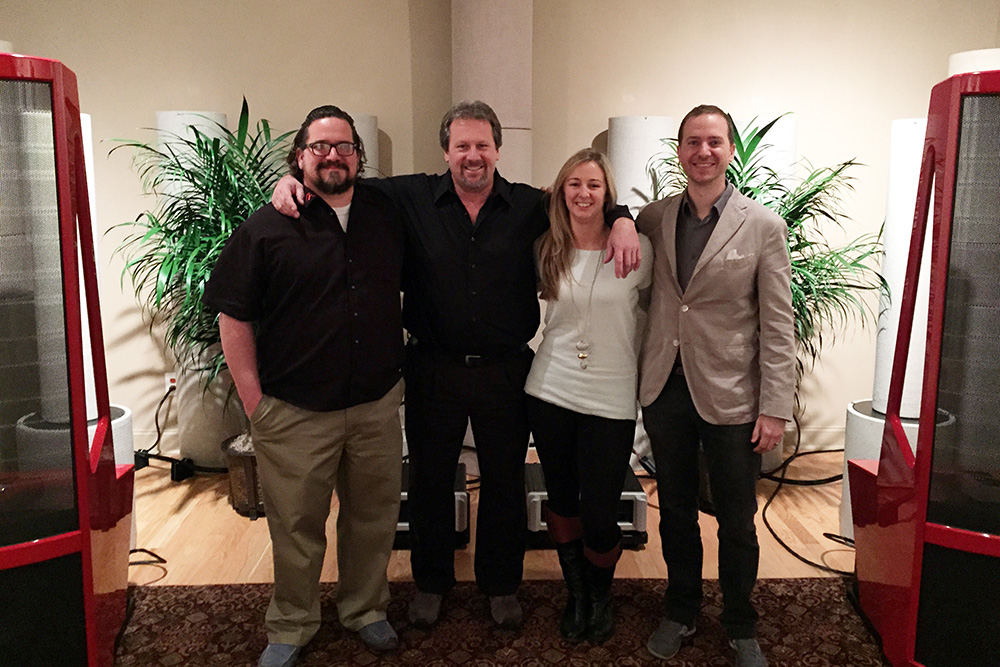 I eventually had to make way for the many local audiophiles who turned up to take a listen to MartinLogan's new flagship loudspeaker, and so was unable to try some of my own source material. Despite this, I came away mighty impressed with the American company's latest offering. The speed and effortlessness normally associated with the rest of MartinLogan's line was easily audible, while their bass performance portended a truly full-range sound without any of the plodding, boomy character one might imagine such a well-endowed loudspeaker would possess. The Neolith enters production in the coming months, and Overture Audio owner Terry Menacker grinned as he spoke with the MartinLogan folks about the color of the first production pair he planned to order for his establishment. Based on his reaction and what I heard, I think there will be plenty of demand for this statement loudspeaker.