After a dinner of bistecca Fiorentina, some steamed greens, and a Casanova di Neri Brunello, Bob fired up "the big system" upstairs. It featured the original Trenner & Friedl Dukes ($125,000 USD per pair when available), a three-box-per-channel speaker system that stacked two long woofer cabinets on the bottom, a Harbeth-like monitor-shaped M/T cabinet in the middle, and a gleaming supertweeter like a grand silver eye atop it all. The Dukes had external crossovers and were biamped with Heed Obelisk PM monoblock amps (70Wpc; $4200/pr.) on the woofers (93dB/4 ohms) and a Viva Solista LT integrated amp (18Wpc; $7800 when available) on the M/T drivers (97dB/8 ohms). The speakers had a claimed range of 25Hz-40kHz. 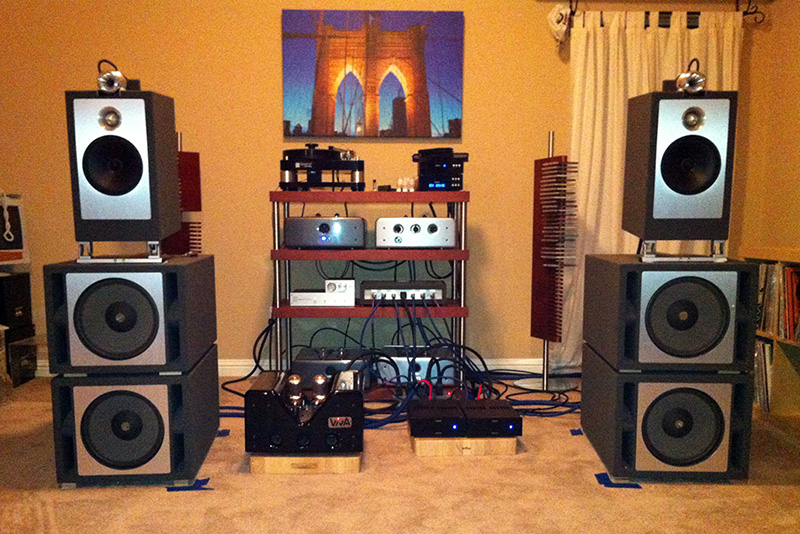 Other electronics were a Viva Linea XP line stage ($20,000) with its own external power supply and a two-box Viva Fono ($16,000). The analog rig consisted of a Basis 2500 turntable with a Transfiguration Orpheus L cartridge mounted on a Vector 4 tonearm. The digital sources were the tidy combination of a Heed DA DAC and DT transport (both $1850). Cabling was mostly Cardas Clear with one pair of Basis ICs and Cardas Golden Reference power cords.

This was a magnificent system that produced a sound of wondrous low-level resolution with a fullness of bass foundation on orchestral music. Bob played my demo CD-R with Beethoven's Piano Concerto No. 4 in G major, as performed by Ivan Moravec with the Vienna Musikverein. I heard fine piano sound with great touch and presence, along with rich, bountiful harmonics and buttery mids. Strings and oboes were perfect. On my "system crusher" track, "Kyrie" from Mozart's Great Mass in C Minor, the choral voices were airy, clear, and balanced, coming beautifully together in space. Natalie Dessay's soprano solo was detailed, dramatic, and liquidinous. And the period strings had superb tone throughout. There were minor flaws in a slightly cupped sound now and again from Dessay's solo, an occasional slight hardness in the male choir at dynamic peaks, and a soft impact to bass drum strikes, but Bob reminded me he'd only just set the system up the week before and he hadn't had time to dial it in perfectly before our session.

But analog was where the system really strutted its stuff. I pulled out a Sarah Vaughan LP I'd just picked up in Nashville the week before. It was her Duke Ellington Song Book Two (Pablo Today). There was a slight problem with balance between outputs from the M/T and woofers that caused a tipped-up sound, but Bob simply adjusted the gain on the Viva Solista LT. That rebalanced the bass and treble and smoothed things out. Sarah had her schwerve on "Mood Indigo," singing in a bluesy drawl as she sashayed her magical voice into the tune. Ben Webster's tenor on See You at the Fair (Impulse), another LP I'd scored in Nashville, was likewise a treat to hear, sounding big, airy, and muscular. On both LPs, the music was full of natural instrumental textures, tactile and detailed.