Honky-Tonking in Nashville over Spring Break

I was in Nashville last month to do a couple of events at Vanderbilt University -- a poetry reading on a Thursday night, then a Q&A on a Saturday morning. That left me with Friday night free, so I got some recommendations and headed off from the Embassy Suites where I was staying to the dives and honky-tonks of Music City's Lower Broadway.

I'd been there ten years before, when the area was grittier and the clubs a lot seedier, but when I got out of my cab, I noticed that things had been cleaned up and that the milling throngs were younger and hipper, more diverse, and more gleeful than I remembered. I headed for Robert's Western World, a non-descript place amidst the more glittery ones between 4th and 5th, smack in the heart of things. Its outside neon shill made the flamboyant claim it was "Home of Sho-Bud, Honky Tonk Heaven, and Hillbilly Grill." 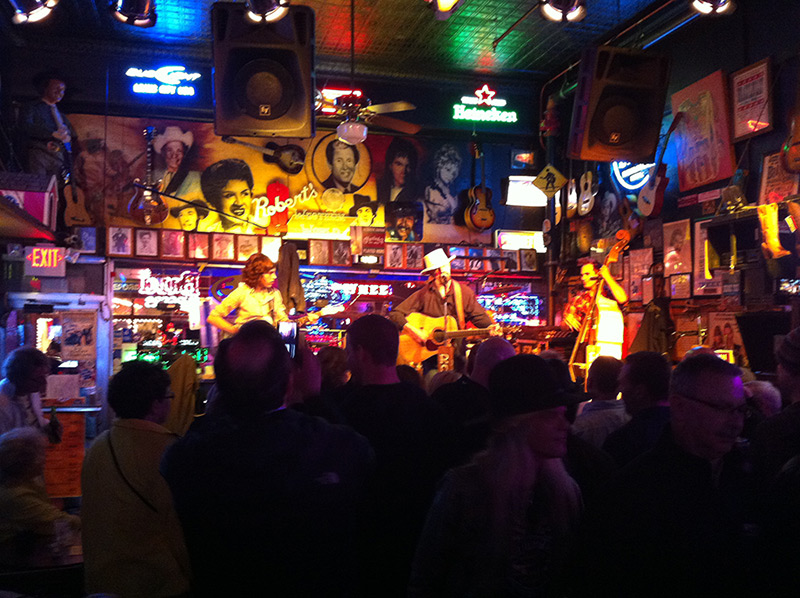 Robert's had a short queue and I made it through within minutes, finding a seat at a small, round table near the bandstand, along a side wall. I had to ask if I could sit, though, as there was an older couple on the bench seats across from me. It turned out they were seniors from Iowa, in Nashville expressly to enjoy the atmosphere and music because, as they said, "there's nothing like this in Des Moines." They told me they came all the time. I bought them a round of Yuengling beers ("America's Oldest Brewery") and we drank to the evening, settling into our seats under a gallery of signed portraits of various stars who'd dropped by, as the Don Kelley Band, the second act of three that evening, took the stage.

The band was the standard country-rock quartet -- electric and acoustic guitars, stand-up bass, and drums -- and the leader wore a Stetson hat pulled low over his eyebrows. He sang in a slight drawl I couldn't place and had a practiced patter between songs, goosing the set with a few canned jokes and shouts of "Thank you, hillbillies!" to flatter the crowd. The set consisted mainly of country standards I faintly recognized -- George Strait, Johnny Cash, etc. -- and just as I started feeling bored, despite the band's superior musicianship (everyone in Nashville plays well -- they'd better), I heard rousing guitar chords strummed with authority, the gut-thunk of a kick drum, and some familiar, cranking notes from the lead guitarist on his Telecaster. "Nineteen sixty-eight, my friends," yelled Don Kelley into the mike. It was "The Weight," that great and mournful ballad from The Band and their monumental Music from Big Pink album. The crowd applauded and shouted, and I felt a great momentum of feeling come over me as the guys in the band took turns singing the Bible-tinged verses. This was their music and not the country standards, it seemed to me, and they put their shoulders to the wheels of fire in the song.

The rest of the set just took it from there -- inventive covers of Waylon Jennings, a rousing Allman Brothers extended blues, then "Heaven" from Los Lonely Boys. I had a helluva good time and the place just rocked, the crowd swelling to hundreds packed into the long rectangle of the high-ceilinged bar. It was just the beginning of spring break, and there were lots of college students there, keeping things a little more lively. A few couples danced, Texas swing style, cramped up against the bandstand, and I heard blasts of a hog-caller's whistling cut through the electric air. Around midnight, I decided it was time to go, so I said goodnight to the gentle couple from Des Moines and started to pick my way through the throng.

I swear, as I left Robert's that night, I brushed by the prettiest girl in the bar. I confess I'd noticed her earlier when she came in and crossed in front of the stage -- a slinky 25 or so, with ash-blonde hair. She was saying something to me with sloe eyes I recognized as drunken. "Can I kiss you?" she asked. Well, I must've said yes, because she did -- smack full on the lips. I leaned back towards her and asked, "Was this a goof or on a dare?" She shook her head. "I was just at your reading last night and I saw you were over there." She pointed to where I was sitting. "You were so great." OK. I'm 61. And it's finally happened to me. Love for poetry!