Back at AXPONA the next day, one of the two rooms dealer George Vatchnadze of Kyomi Audio had was the knockout absolute best in show (not surprising from a concert pianist who teaches performance at DePaul University). Besides La bohème and the VSA Universe, another reason I came was to hear the Convergent Audio Technology JL5 -- a new triode stereo amplifier ($10,000 to $12,000) that was supposed to rival, if not equal, the performance of the grand, all-class-A JL2 Signature Mk 3. I wasn't disappointed. 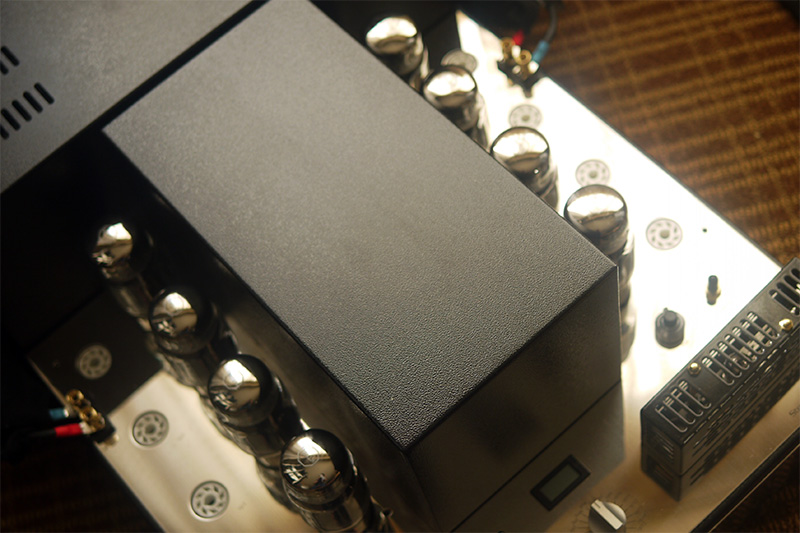 The JL5, like the JL2, outputs a similar 100Wpc (albeit in class A/B). But according to CAT engineer Ken Stevens, it will be a physically smaller version of the behemoth JL2 amp I'd enjoyed at numerous shows in years past. Once casework is completed, the JL5 will weigh roughly half the bigger amp's 170 pounds. The Kyomi demo, set up on a diagonal by Dan Meinwald of E.A.R. USA, also featured the CAT Renaissance 2 preamp, an Esoteric K-01 with G-0s masterclock, wires by Magnan Cables, and a pair of glorious-sounding Märten Django XL speakers ($15,000/pr.). The CAT JL5 was still in prototype, fitted to the larger JL2 Signature chassis and using only half of the JL2's 16 KT-120 tube sockets (four per channel rather than the JL2's eight). But boy did it sound amazing! Playing was my demo track of "Kyrie" from Mozart's Mass in C minor, performed by Le Concert d’Astrée and featuring Natalie Dessay (soprano). Meinwald called it "a real system fucker," as its dynamic range and demand for current is immense, with chorus and full orchestra and operatic soloists to boot. The JL5 sailed through it all, sounding full and powerful, with great orchestral drive and tempo and the male and female voices distinct. The period strings were very clear and never ragged, the violins as forceful and synchronized as the offensive line of the Pittsburgh Steelers in playoff mode. "Just about the real thing," said an attendee sitting in front of me, nodding, with a big grin on his face. He was in the prime seat in the front row, turning to a lovely woman sitting next to me in the second row. "With this," he said, "a concert every night!" In the end, I too stopped listening critically and just lost myself in the majesty and beauty of the piece. I came back to this room three times -- it was that good.

Colleen Cardas Imports also had two rooms, one featuring new electronics with striking casework from New Zealand manufacturer PureAudio and another featuring products from Italy's Unison Research and Opera Loudspeakers, favorites of mine for many years now. PureAudio engineers Gary Morrison and Ross Stevens came over from Plinius to start their own company recently, producing the Reference Class A monoblock amplifiers ($15,500/pr.), Control preamp ($9500), and Vinyl phono ($4500). The speakers in the PureAudio room were the 1920S monitors from My Audio Design ($3800/pr.). Though I enjoyed what I heard, an amiable guy singer strumming an acoustic guitar, I wished that the MAD full-range speakers sitting idle beside the monitors had been coupled to these eye-catching new products from Pure Audio. 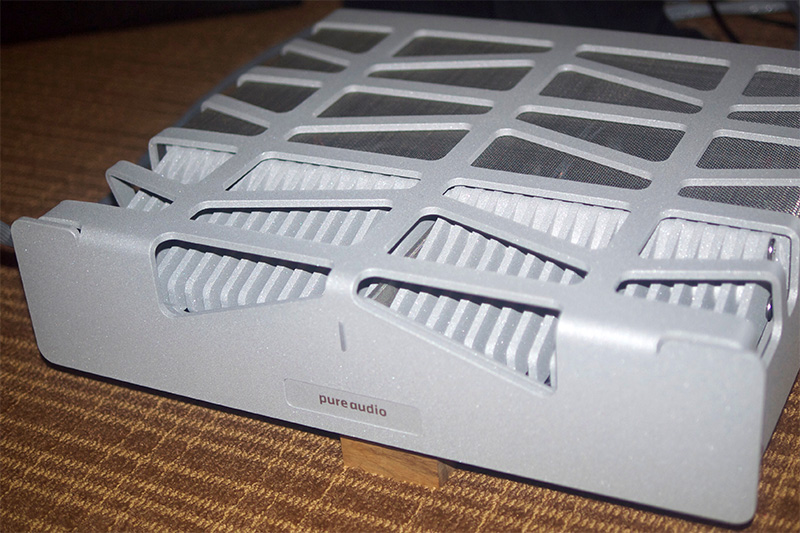 Another candidate for best in show was the Music Direct room with electronics from BAT, an Esoteric K-05 player ($7000), and Scala Utopia speakers ($32,000/pr.) by Focal. I thought my demo track of Moravec playing Beethoven's Piano Concerto No. 4 with the Vienna Musikverein sounded superb with just the right amount of slam and detail, fine string sound, and brilliant piano. "Kyrie" from Mozart's Mass in C minor, as performed by Le Concert d’Astrée, was likewise grand, with great detail and bloom in the choral voices and no trace of edge hardness to Natalie Dessay's soaring soprano solo. But incessant and loud talking in the room compromised the demo so much that I couldn't stay for as long as I wanted. New were the BAT REX Power Series 2 tube monoblock amps ($20,000/pr.) and the BAT REX Series 2 preamplifier ($25,000). The REX 2 preamp features amorphous-core transformers in the signal path instead of the capacitors that were in the REX 1 -- a very good change. The casework's also been improved with a brushed-aluminum top and a laser-engraved logo. 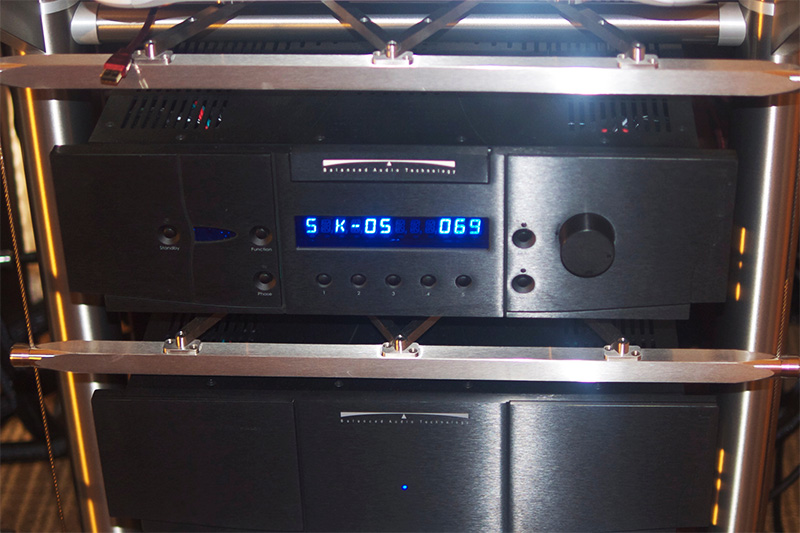 Mark O’Brien of Rogue Audio teamed up in a room with Decibel Audio and put together an attractive system built around Harbeth Monitor 30.1 speakers (85dB/6 ohm; $5950/pr.) and the brand new Rogue Sphinx integrated, hybrid amplifier ($1295). The Sphinx has a class-D solid-state output and a 12AU7 tube input, with a headphone jack and phono as standard features. Sourced with a Cambridge Audio Azur 851C player, the system produced a spacious "Gimme Fever" from an Elvis CD and then a version of "The Look of Love" from Shelby Lynne that smoldered and seduced. 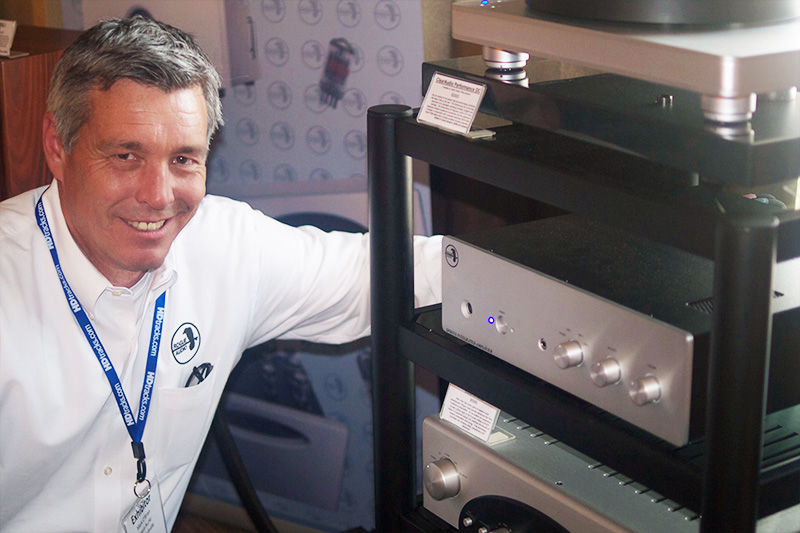 Mark O'Brien with the Sphinx

Mike Holm of Holm Audio in Chicago sold me one of my first high-end pieces back a few years ago when I got started in the hobby -- an Electrocompaniet ECI 3 integrated amp that I bought as a demo and adored. I mention this, as he is a man with great ears, I think, and his two rooms certainly demonstrated that. They both featured Sony speakers and electronics from another, more recently founded Norwegian company, Hegel Music Systems. In my favorite of the two, I heard Sony's flagship SS-AR1 speakers driven by a Hegel H20 stereo amp ($5700) with a Hegel P20 preamp ($2900), sourced by a Hegel CDP2A ($2650) and Hegel HD25 DAC ($2500, review forthcoming on SoundStage! Hi-Fi). The sound on "Kyrie," my demo track from Mozart's Mass in C minor, had great bass foundation and punch, choral air, no vocal hardness in either the soprano soloist or the choir, and fine midrange detail and clarity. The highs were pure and airy, and Dessay's soprano solo could be both silky and authoritative, depending on the passage, which features huge dynamic swings. 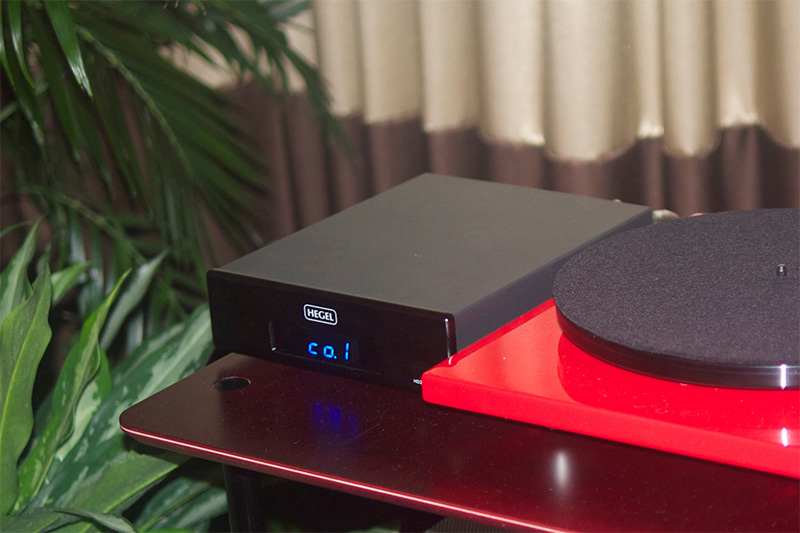 Gilbert Yeung of Blue Circle Audio is definitely his own man. I've seen him come to his demo rooms at shows dressed in black jeans and a ratty white tee scrawled all over with cartoon drawings and random words. He always fixes you with an intense yet friendly gaze, as though inviting you into his world -- a workshop of technology and nimble imagination. This time, though, he was dressed in a snazzy grey suit and black fedora, his long hair scrolling over his shoulders. He still had that gaze when he ushered me into his demo, which featured a preamp so new that he hadn't even finished its casework yet. All the electronics were stuffed into a prototype chassis without a lid that exposed the unique input stage he's devised -- one 6SN7 tube, one 6922 tube, and a solid-state module, all working in parallel. The user can then control all three via knobs on the faceplate that boost or attenuate each of their sonic contributions, thus creating a specific blend of sonic "flavors" to the pre. It works like a two-channel mixing board! 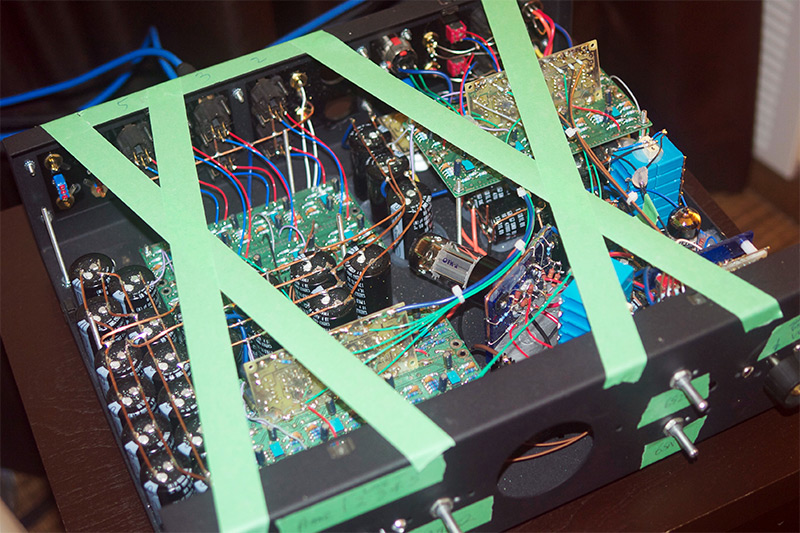 This was the BC 307 with L3 power supply ($6000 to $12,000). Optional are a headphone jack and phono. "A customer can also get this in any style or color -- wood laminate faceplate, black or green aluminum -- whatever he wants," Yeung said. On Paquito D'Rivera's "Corcovado," I heard sensuous female voices blending in harmony, a very lovely soundstage, and guitar and piano with beautiful tone and fine resolution coming from Yeung's new pre, a BC 1022 stereo amp ($4750), a BC 507 DAC ($2250), a transport I didn't recognize, and a PSB Imagine B set of minimonitors ($1100/pr.). 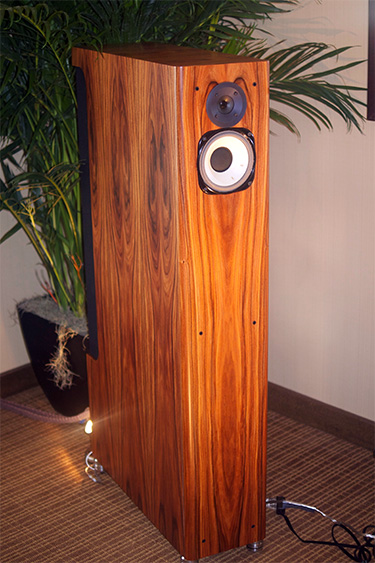 On the first day of the show, high on my agenda was Jeff Catalano's High Water Sound all-analog room in an upper floor. Unfortunately, Jeff's gear suffered a lot of damage from shipping and he'd lost a channel in his phono stage, a Thöress Phono Enhancer ($9000). He had to shut down his demo on Friday and work frantically into the night trying to get it restored, alas, to no avail. Luckily, he also had a Tron Seven GT phono ($20,000) he'd brought along for a client and it performed wonderfully. By Saturday the whole system was singing, and he treated me to a long session that I hated to leave. Source was the TW-Acustic GT turntable ($9500) with two TW-A Raven 10.5 tonearms ($5500 each) that each had a Miyajima Labs cartridge mounted -- for stereo, a Shilabe ($3000), and for mono, a Zero ($2000). Electronics were Thöress Systems 845 SE mono amps ($14,000/pr.), Thöress preamplifier ($9000) and the aforementioned effed-up Thöress phono Jeff managed to rescue for mono playback. The rack was a Silent Running Audio Scuttle with Ohio XL bases. Signal cables were from ZenSati, and Tel Wire supplied the power cables. A Silver Circle Audio Tchaik 6 ($9500) handled AC. Featured were new Hørning Eufrodite Zigma Plus speakers ($24,000/pr.) just in from Denmark (shown in photo right).

On mono playback, I got Wes Montgomery in an organ trio strumming and plucking a deft "'Round Midnight," followed by old folkies Ian & Sylvia on their eponymous debut LP teaming up for a sensational version of "Down by the Willow Garden." For this tune Sylvia ditched her normally demure singing style to take on a spooky, Makeba-like voice with faintly Caribbean verbal inflections, raising up the short hairs on my arms and haunting the air with an eerily lifelike presence. On stereo I got Steely Dan performing "Babylon Sisters" from Gaucho, Handel's Water Music on Harmonia-Mundi LP, and Mussorgsky's "A Night on Bald Mountain" from The Power of the Orchestra by the Royal Philharmonic Orchestra on an Analog Productions repressing of the original RCA Living Stereo LP. Every track had great depth and layering, wondrous imaging, air and punch, and fine shadings of inner detail, along with an almost plush texture to the soundfield with gorgeous articulations of instrumental and vocal timbres. There was a profound balancing of audio values into a coherent musical presentation. The Mussorgsky piece was particularly big, bad, and beautiful, with superb dynamic expressiveness and an instant movement of motifs from section to section in the orchestra. All was swift, fleet, and sure-footed with superb shadings and magnificent orchestral scaling. I was completely convinced of the Hørning speakers' prowess on large-scale music. Best analog in show? Most definitely! I thought this debut of the Hørning Eufrodite speakers so stunning, in fact, that I asked to review them on the spot. Look for it in a coming issue of Ultra Audio.

AXPONA '13 was a good, solid three days of audio browsing amidst the very gracious and welcoming folk of Chicago, along with exhibitors gathered from around the area and nationally. I heard the sponsors definitely want to bring it back to sweet home Chicago next year, though the hotel venue might change. I'll miss the fine steak at Gibsons Bar, though not the fire alarm that emptied the DoubleTree for 45 minutes on Saturday afternoon. It was refreshing to stand outside in the cold spring air and kibbutz with the likes of veteran speaker maker Albert Von Schweikert and mingle with new acquaintances (as who would talk while inside at a demo?). But for me, the location was much too far from Chi-Town's really swell and swank attractions. Next time, I'd like more restaurant choices, a sushi bar, and mos' def' a place nearer the opera.