Most audio reviewers get excited about the really expensive equipment -- the stuff that costs in excess of ten grand. Invariably, that's what they look for at shows. It's the kind of gear that most people can't afford, so maybe this fixation lets these reviewers live in a fantasy world of lavish expense. On the other hand, I get really charged up about the affordable gear because it represents what I can buy. Fantasizing, at least for me, isn't all that much fun -- I want the real thing to be within my reach.

The most impressive affordable new loudspeaker I heard at CEDIA Expo was Definitive Technology's SM55, the middle child in the new StudioMonitor line, which also includes the smaller SM45 and larger SM65. (Definitive Technology says you can call them StudioMonitor or SM, so take your pick. They just don't want you to call them S&M.) The SM55 sells for $598/pair, and the company had them playing in a small "cabin-like" room off to the side of the exhibit hall. Price-wise, these speakers are within the reach of most consumers, including me. 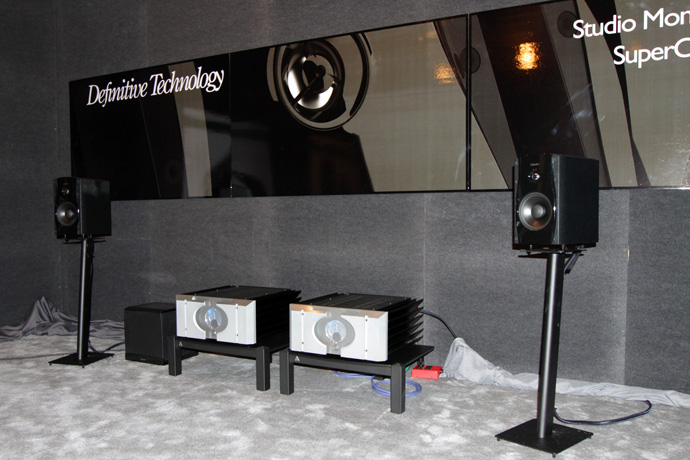 The most striking thing about the SM55s is the way they look. It's a two-way design with a 1" tweeter and a 6.5" midrange-woofer on the front baffle, but with a passive radiator on top, which is something you don't often see in bookshelf-type designs. The passive radiator helps to extend the bass. The SM55's build quality seems excellent and the styling is, like all DefTech products, superb.

The most surprising thing about the SM55s at CEDIA Expo was the way they sounded in that room -- like a speaker two to three times the size and price. The bass was rich and generous (the demo included several musical cuts, mostly with the subwoofer off but sometimes with it on), the highs were quite refined, and the midrange was gorgeously smooth-sounding and pure, fitting of a speaker that costs much, much more. DefTech's Paul DiComo said, "If a two-way design can't get the midrange right, then there's no reason that it should exist." He's right, and in my estimation the SM55 gets the midband better than most speakers, even those priced quite a bit higher.

My initial impressions of the SM55's sound were obviously very positive, but Definitive Technology conceded that although the design work for this series is close to complete, it's not quite done. Still, what I saw at CEDIA 2011 was so promising that you can be assured we'll be following up in the months to come with a request for a review sample so we know how the production version turns out. I'm sure that we haven't heard the last of the SM55 quite yet, and neither have you.