"The discoveries made by our engineers were so profound that when the end result was first demonstrated within Bose, the reaction was nothing short of astonishment." So reads the literature that accompanies Bose's new VideoWave II "entertainment system." Also known as a television, the second-generation VideoWave screen is a two-product line comprising a 55" model priced at $6495 and a 46" model at $5495. With a 1080p, 120Hz LED display sourced from Samsung and an array of 16 individual speaker drivers enclosed along all four sides of the 6"-deep, wall-mountable device, it struck me as an interesting, if grossly overpriced, product. 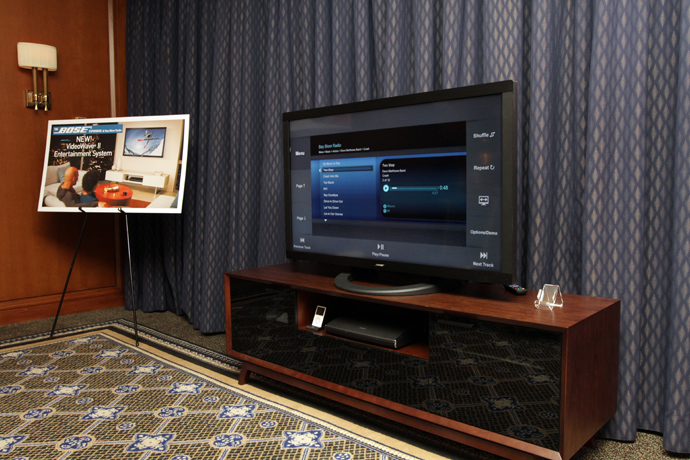 Harnessing the might of Bose's patented PhaseGuide radiator technology, award-winning waveguide technology and proprietary signal processing, Bose markets the product as a virtual 5.1 design, with six of the 16 drivers dedicated to producing bass. The kind but ill-informed Bose representative told me that the six bass drivers radiate down from the bottom of the television. In reality, the bass drivers radiate inside a single chamber inside the VideoWave, which in turn feeds Bose's legendary waveguide in a sinuous path toward the exterior of the chassis. The location of the remaining ten drivers was a mystery, but presumably they are arrayed along the top and side panels, using the PhaseGuide (a sort of mesh) to disperse sound throughout the room.

Apropos of their motto "Better Sound Through Research," all of this clever speaker technology is the result of ten years' worth of work. All of which would be good if the television . . . apologies . . . if the entertainment system enclosed $4500 to $5500 worth of audio equipment and knowledge above the roughly $1000 it would cost you to go out and buy a similar screen direct from Samsung. 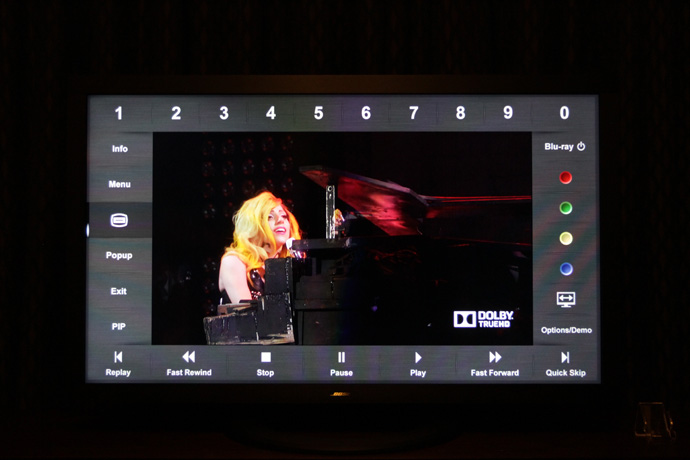 It has the desired effect of shooting sound around the room, fooling the ears that there may be more than just one sound source in the room. But it flatters to deceive. There have been several excellent "lifestyle" products that we have seen on the first day of the TAVES show that produce excellent sound from a modest (and modestly priced) package. While the Bose is characteristically modest looking, it's also characteristically very un-modest in its asking price.

And that's the rub. It's a clever idea, but it's far too expensive for the quality of sound (or lack thereof) that it produces. It's not even wall mountable, per se, in the sense that in order to make space for the speakers inside of the VideoWave II, all of the television's connectivity is housed in a separate "console" that effectively makes the VideoWave a two-chassis package. No wonder Bose prefers to call it an entertainment system. This would be a bargain if it were a $4K television. As it stands, however, one would be better off just buying a screen from Samsung and investing in a soundbar. Bigger, cheaper, and better sound through (a little consumer) research.