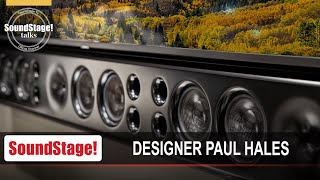 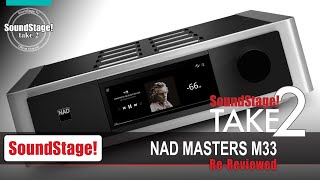 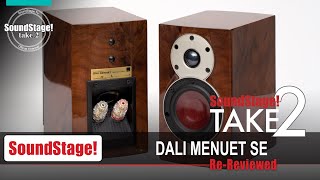 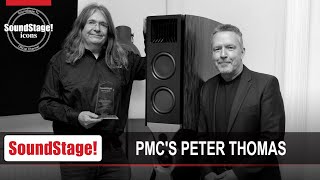 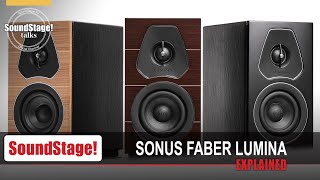 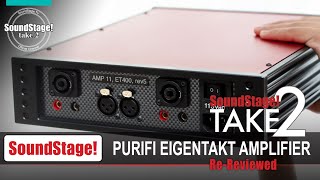 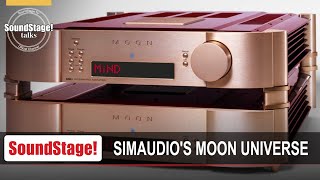 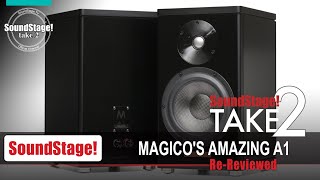 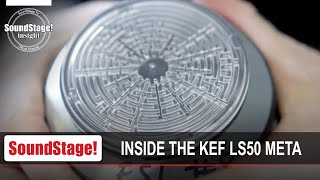 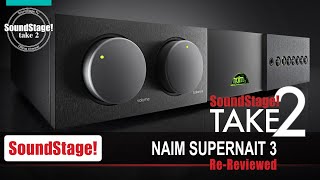 Unlike the last time I was at the Rocky Mountain Audio Fest (RMAF), in 2013, hi-fi electronics were plentiful at this year’s show. I easily found more than enough to cover, spanning all price ranges, which are quoted below in USD.

Benchmark Media Systems used RMAF 2018 to launch two new products that it was able to lump together into one neat little stack. On the top is the DAC3 B, which has the same basic circuitry as the company’s more expensive DACs, but deletes the volume control, polarity and mute buttons, and headphone amp found on those models. The omission of those features is the reason for the B -- it means basic -- as well as a price that’s lower than its other DACs: $1695. 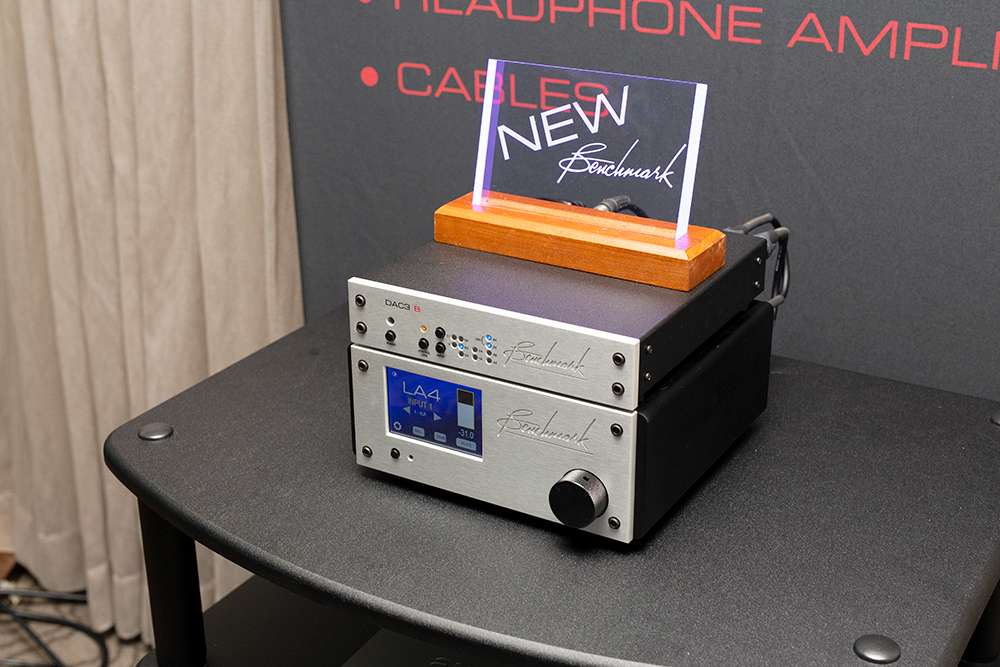 On the bottom is the LA4 linestage preamplifier, priced at $2495. It’s roughly the width and depth of one of the company’s DACs, which is why you can stack them neatly, but it’s quite a bit higher. The LA4 has two pairs each of single-ended (RCA) and balanced (XLR) inputs, and boasts some impressive specs: THD of less than 0.00006% and a signal-to-noise ratio exceeding 135dB from 20Hz to 20kHz. It also includes a headphone amplifier with claimed THD of less than 0.00006%, as well as a 20Hz to 20kHz signal-to-noise ratio exceeding 131dB. Volume is controlled by dual 256-step attenuators that operate in 0.5dB increments. Another feature is a touchscreen that can be used to adjust channel balance, to rename or offset the level of inputs, and to adjust screen brightness, as well as other things. The LA4 isn’t quite available now, but it will be soon -- the company’s website says it will start shipping at the end of this month. 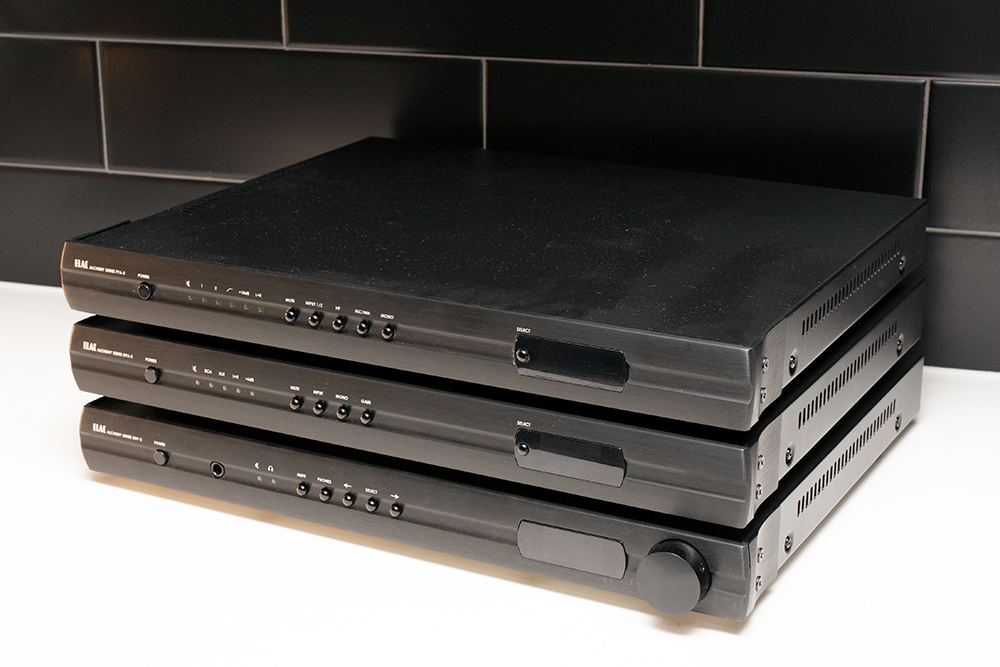 Elac had on display its own gear stack. From top to bottom are the PPA-2 phono preamplifier ($999.98), DPA-2 stereo/mono amplifier ($1499.98), and DDP-2 preamplifier-DAC-streamer ($2499.98), all of which are upgraded and reconfigured versions of products from Audio Alchemy, which Elac purchased last year. The PPA-2 is switchable between stereo or mono operation and is compatible with moving-magnet (MM) and moving-coil (MC) cartridges. For MC cartridges, loading is adjustable from 5 to 999 ohms. The DPA-2 can operate as either a 325Wpc (4 ohms) stereo amp or a 625W (8 ohms) mono amp. The input stage is FET based, while the output stage is a class-D PWM type. There are balanced (XLR) and single-ended (RCA) inputs, as well as a gain switch for better matching to a preamp. For analog input, the DDP-2 has two sets of single-ended (RCA) and one set of balanced (XLR) connectors. Digital inputs include two TosLink optical, one USB, two RCA S/PDIF, one XLR AES/EBU, one Alchemy i2S, and one HDMI i2S. The internal DAC operates at 32-bit/384kHz in what the company calls a “digitally balanced mode.” It supports PCM, DSD, and MQA file types, as well as Roon, Spotify Connect, and AirPlay. 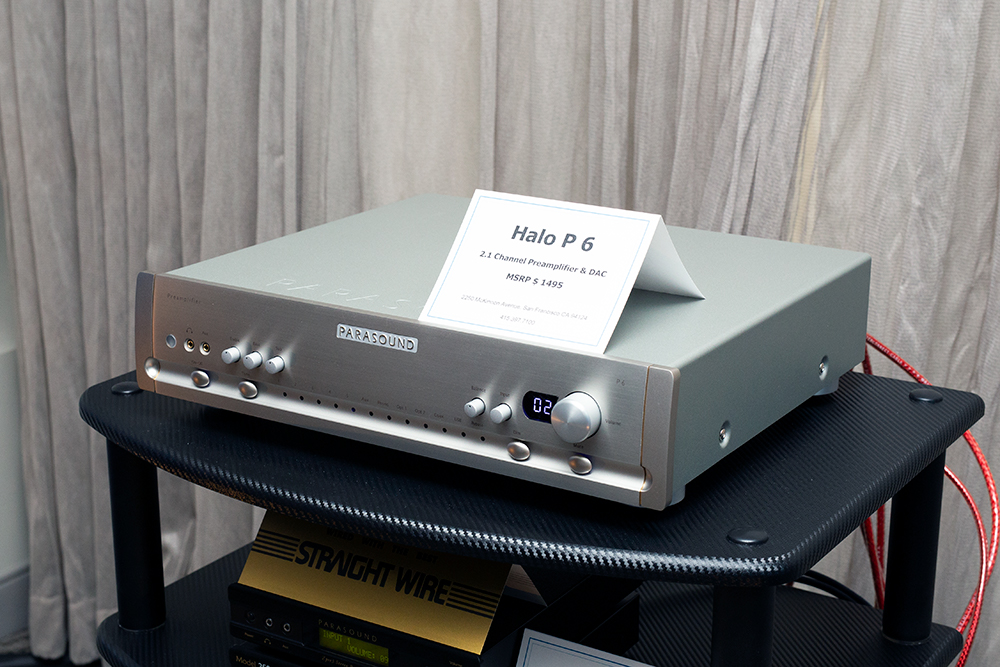 Parasound showed off its new Halo P 6 2.1-channel preamplifier-DAC, priced at $1495. The DAC section is based on an ESS Technology Sabre32 Reference chipset, and there are USB, optical, and coaxial inputs. As with most DACs today, PCM and DSD are supported. There’s a home-theater bypass to integrate the P 6 into a surround-sound system, but what makes the P 6 really special is a feature that carries over from the previous model, the P 5: a subwoofer output with analog bass-management controls, allowing for ideal subwoofer integration into a stereo setup. 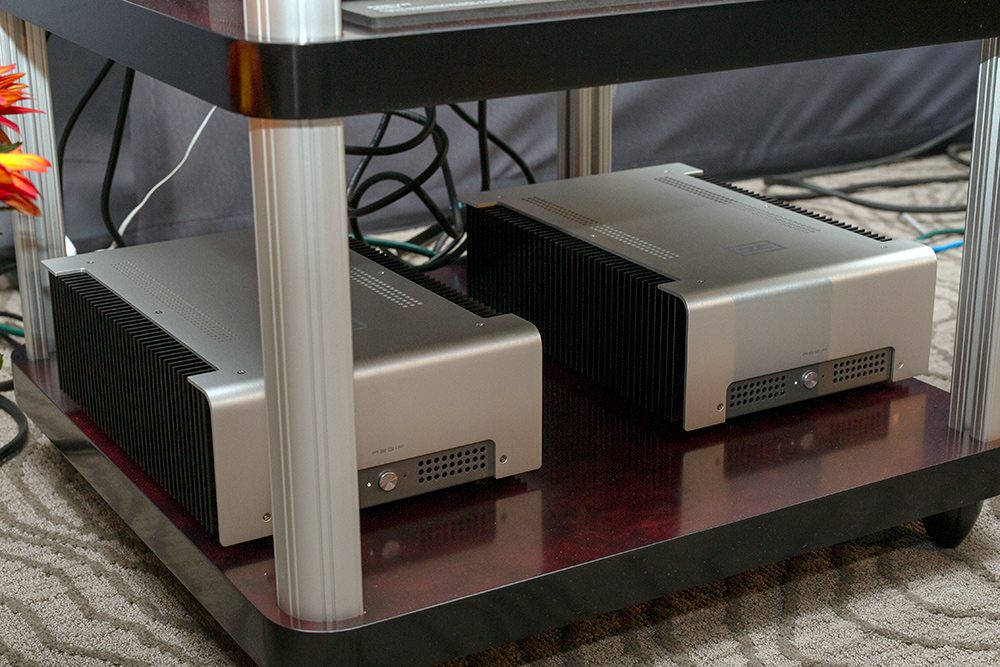 The new Schiit Audio Aegir stereo/mono amplifier has what the company calls a Continuity circuit topology that it claims “solves the transconductance-doubling problem of Class AB amps” and allows them to “extend linear performance outside the Class A region.” The company doesn’t say exactly how this is done, but it does say that as a stereo amp, the Aegir outputs 20Wpc into 8 ohms or 40Wpc into 4 ohms; bridging the two channels to mono increases output to 80W into 8 ohms or 160W into 4 ohms. Signal-to-noise ratio is said to be greater than 100dB, which is high for an amp, while the price, only $799, seems very low for what’s being offered. 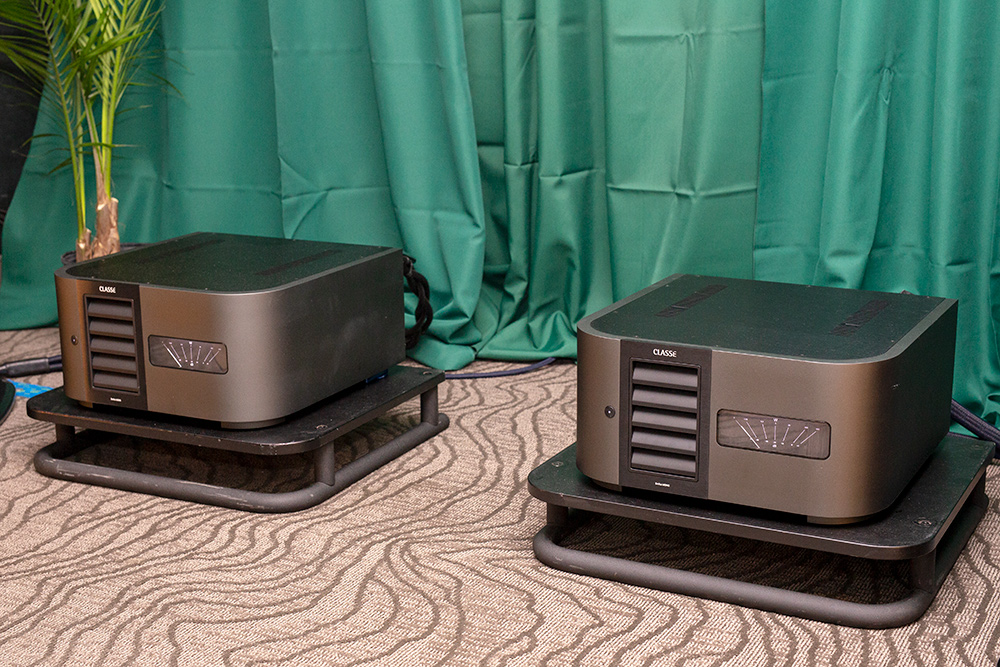 Thanks to a Sound United buyout, Classé Audio is back in black, with some of the same people originally involved and a familiar look to its electronics, but with entirely new circuit designs. Shown above are a pair of Delta Mono monaural amplifiers, each claimed to output 300W into 8 ohms or 600W into 4 ohms. The first 30W of the Delta Mono are said to operate in pure-class-A mode. There’s also a similar-looking Delta Stereo, capable of 250Wpc into 8 ohms or 500Wpc into 4 ohms. Unlike Classé amps of yesterday, which had bipolar output transistors, these new ones are said to use lateral MOSFETs in their output stage. Although pricing hasn’t been firmly established because they haven’t been released yet, I was told that the Mono should retail for $10,500 each, so $21,000 for a stereo pair, while the Stereo should be $12,500. 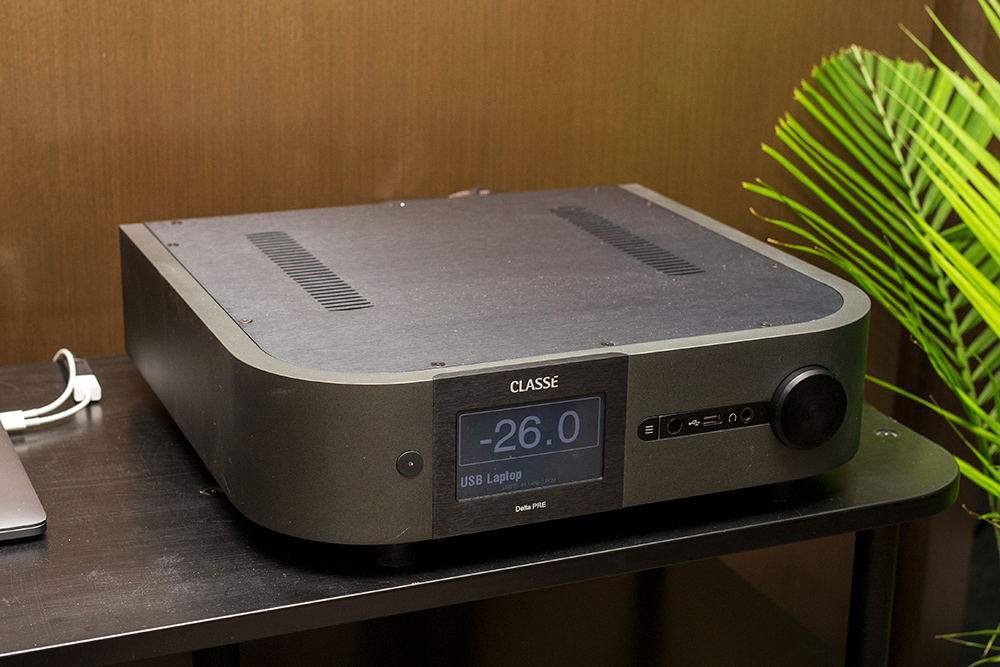 There’s also the matching Classé Delta Pre preamplifier-DAC, which should be priced at $9500 when it’s released. Details were scarce, but I learned that the internal DAC operates at up to 32-bit/768kHz, and that the phono stage, which supports moving-magnet and moving-coil cartridges, can be adjusted for gain and loading via the front-mounted touchscreen display. 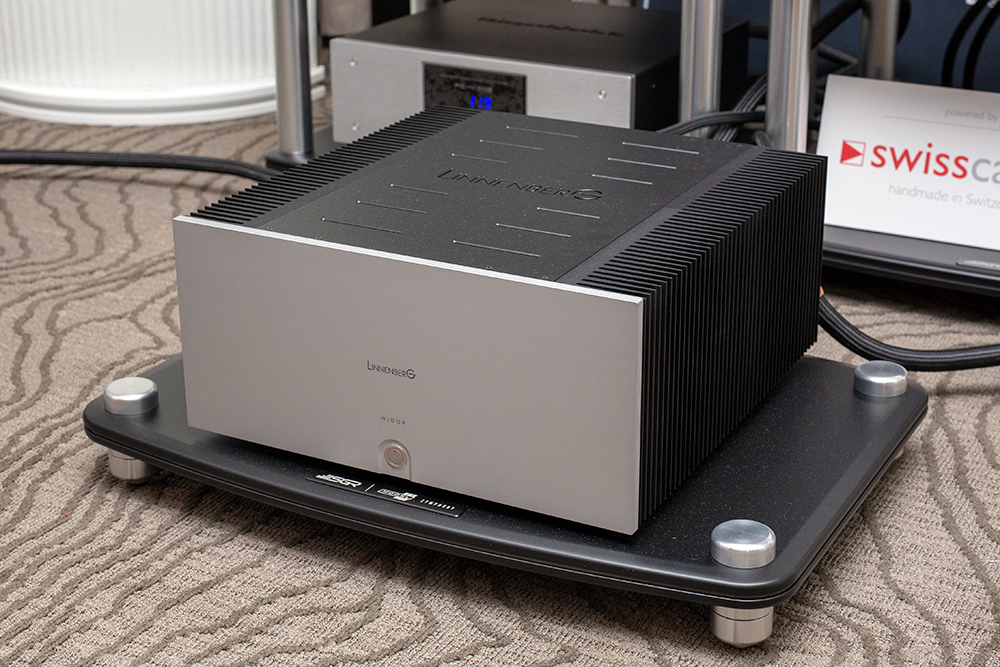 US distributor Well Pleased AV used RMAF 2018 to debut the Widor stereo amplifier, from Germany’s Linnenberg. Priced at $19,000, the Widor is rated for 150Wpc into 8 ohms or 250Wpc into 4 ohms. Like the Classé amps, the Widor also has an output stage based on lateral MOSFETs. The company says the Widor is a fully balanced design that has extremely low noise and exceptionally wide bandwidth, claiming: “The high quiescent current design of the preamp and driver stages enables a core speed close to 1.5MHz, slowed down only by input and output filtering to match real-world requirements. With filters in place, the small signal as well as full power bandwidth (!) measures an impressive 500kHz.” The Widor will begin shipping in the US in November. 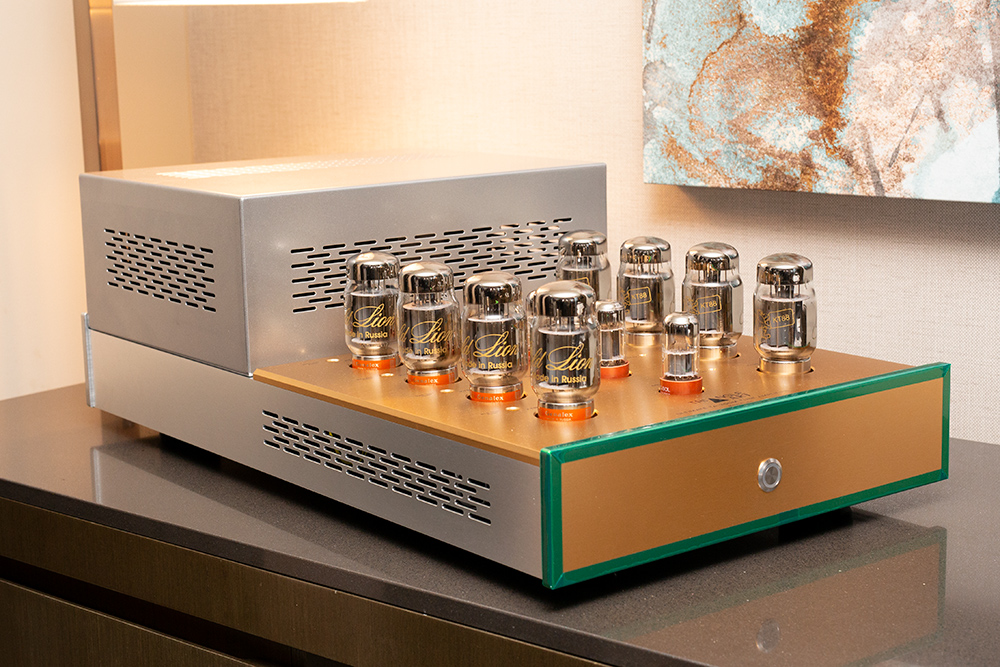 When I discovered Triangle Art at Munich’s High End, I got a big surprise -- I found out the company designs and manufactures all its products in Anaheim, California, USA, home to decades of family fun at Disneyland. I had no idea that Triangle is an American brand. Shown above is the Ultimate TA-350M, a push-pull, triode-based design that uses . . . 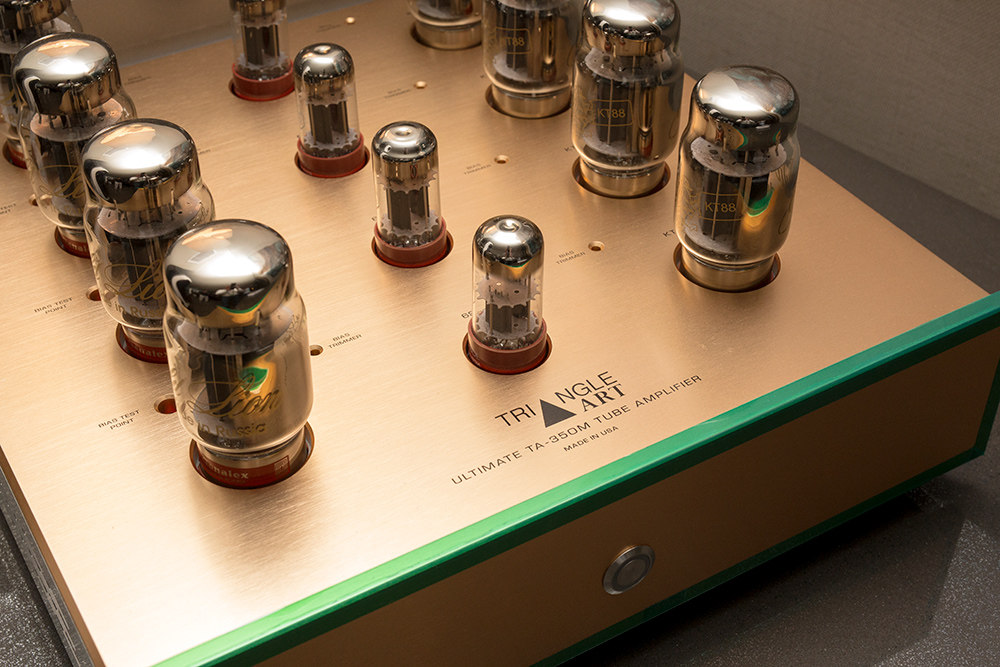 .  . . eight KT88 tubes to output 350W via 8- or 4-ohm taps. It also has three 6SN7 driver tubes and one 6SL7 rectifier tube. The TA-350M is priced at $59,900 per pair, so it’s certainly not cheap, but it looks like it aspires to be a state-of-the-art tube-based design, so worth looking into for those who have the desire and the means. Don’t think Triangle Art only does tubes, however, because it also showed . . . 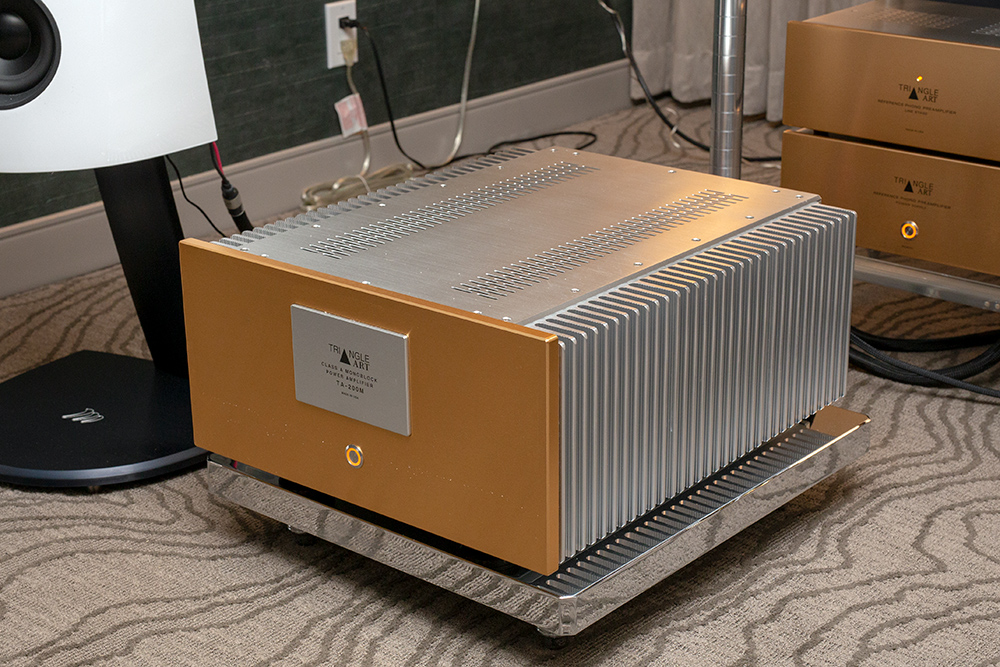 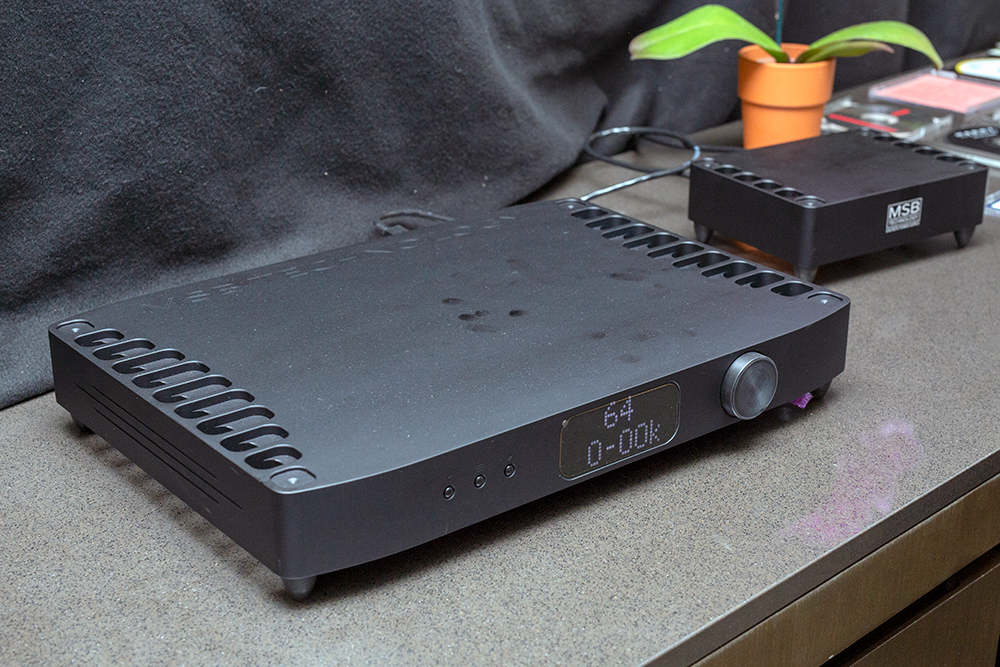 Don’t laugh when I say that MSB Technology’s Premier DAC, priced at $19,500, is affordable. It is -- at least when you compare it to the prices of the company’s Reference and Select DACs, respectively priced at $39,500 and $84,500. The Premier has four of its proprietary ladder-type Prime DAC modules, a volume control that operates in 1dB increments, and an external power supply. Single-ended RCA outputs or XLR-type balanced outputs are available. It’s said to support 32-bit PCM files from 44.1kHz all the way up to 3072kHz (yes, you read that figure right -- 4X 768kHz, the highest sampling rate we usually see), as well as up to DSD512 (8X DSD). If the Premier DAC isn’t affordable enough for you, MSB also released the Discrete DAC, priced at $9950 with two of its Prime DAC modules and still including a volume control.