At the Rocky Mountain Audio Fest in Denver, Colorado, there are always lots of products that don’t fit the categories I usually focus on, but which merit audiophiles’ attention nonetheless. Here are the most interesting ones I found, from headphone pads and AC regenerators to things that are way too complicated to describe in one sentence. All prices in USD. 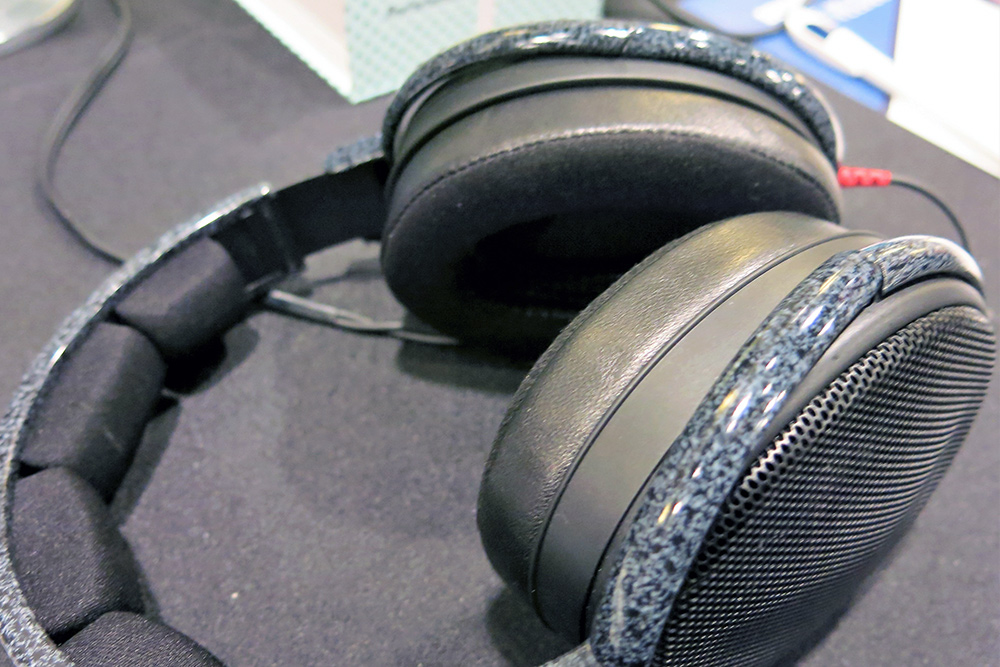 Dekoni specializes in something that should prove extremely useful for headphone users: high-quality replacement earpads for leading brands including AKG, Audio-Technica, Beyerdynamic, Fostex, Sennheiser, and Sony. They use sheepskin edges to maintain isolation, velour on the cheek side, and perforated sheepskin on the inside edge. All of this is wrapped around YM80 memory foam, which the company says is “like a Tempur-Pedic mattress for your face.” The pads are thicker than standard, and that can change the sound of the headphones. I tried two different pads for the Sony MDR-7506 headphones, a standard in recording studios. One made the 7506s a little bassier (which had its upsides and downsides), and the other made the sound much more treble-heavy (which isn’t to my taste, but which some headphone fans like). 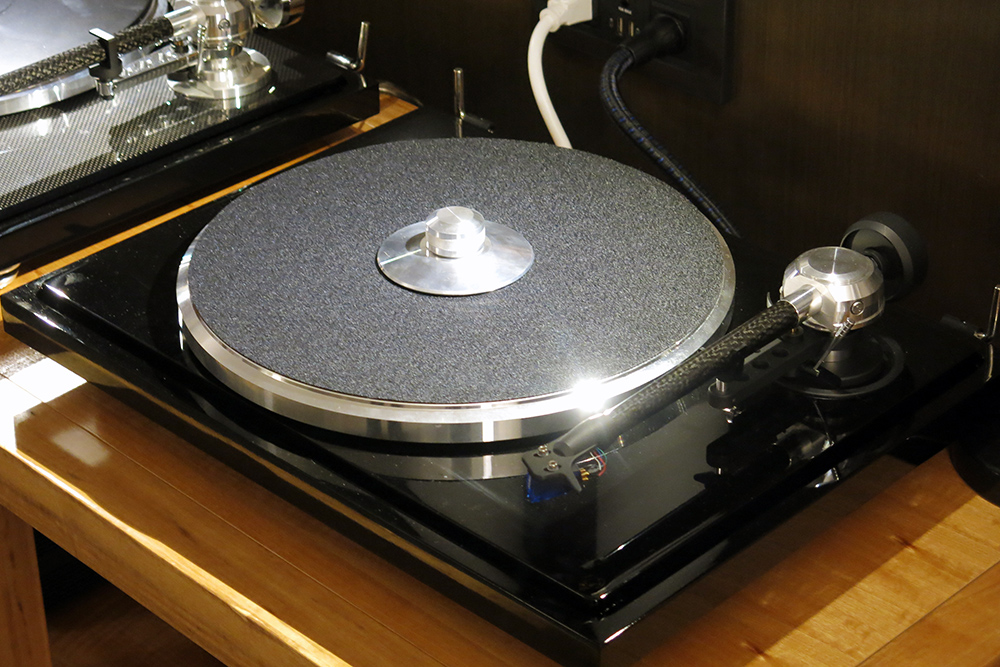 The B-Sharp ($1595) is the lowest-priced turntable from EAT, or European Audio Team. It has a 9" carbon-fiber tonearm with an anodized-aluminum sandwich headshell, and includes a record clamp and an Ortofon 2M Blue moving-magnet cartridge. The plinth is isolated from the subchassis by an elastomeric material, and the subchassis sits on feet that are also isolated from the shelf below with elastomers. It’s available in gloss black or gloss white. 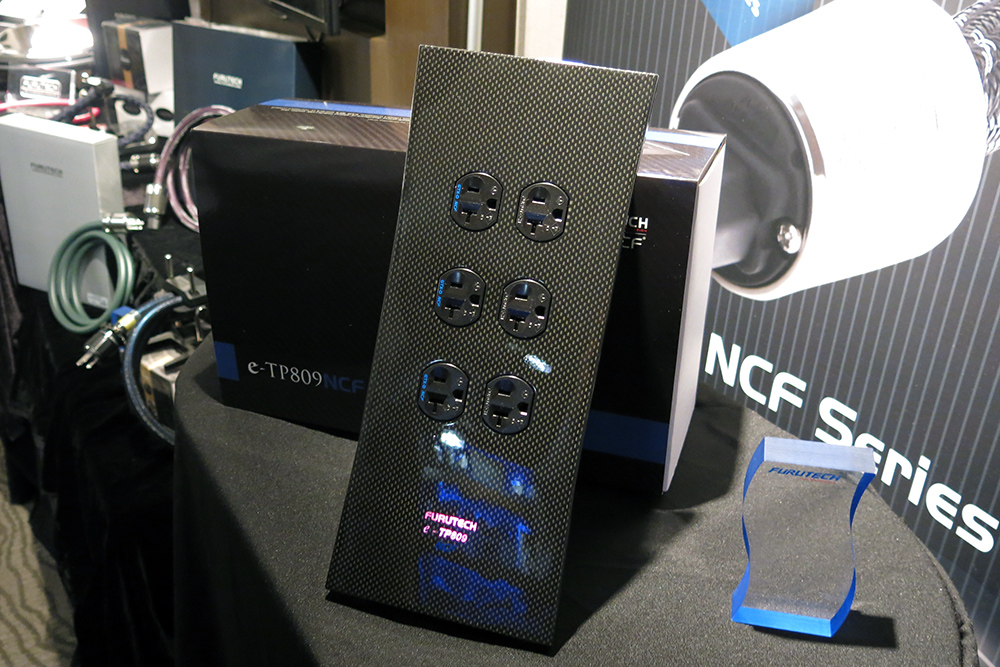 Furutech’s e-TP809 NCF ($3995) “takes passive power distribution to a radically new level,” said the US representative. Translation: it’s sort of like the world’s most high-end power strip. Its carbon-fiber body holds three of Furutech’s GTX NCF double AC outlets. In the bottom is a bag of NCF crystals, combining nano-sized ceramic particles with carbon, a mixture said to generate static-reducing ions while converting thermal energy into far infrared. Even though there are no filters inside, it weighs more than seven pounds. 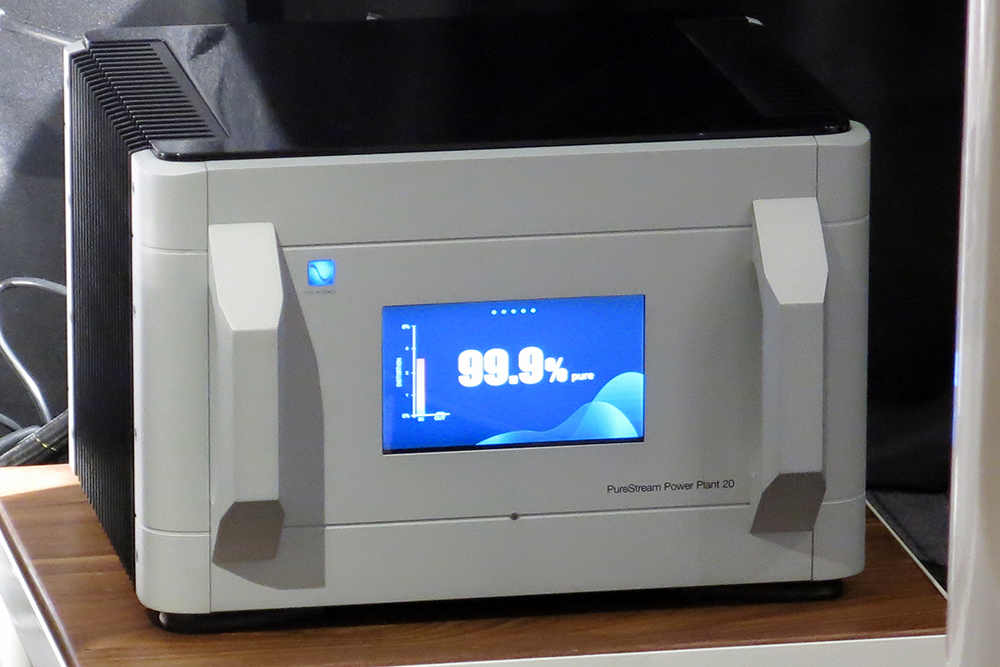 PS Audio’s P20 Power Plant (price TBD) is a substantial upgrade on the company’s existing P10. It’s a power regeneration device -- basically a 60Hz oscillator driving a powerful amplifier to generate completely fresh and clean AC power. With a 20A input, it’s said to produce 2000W of continuous power, versus about 1300W for the P10. It’s also said to have three times the energy storage and double the number of output devices as the P10, so it delivers more power more quickly, which should translate to better dynamics. 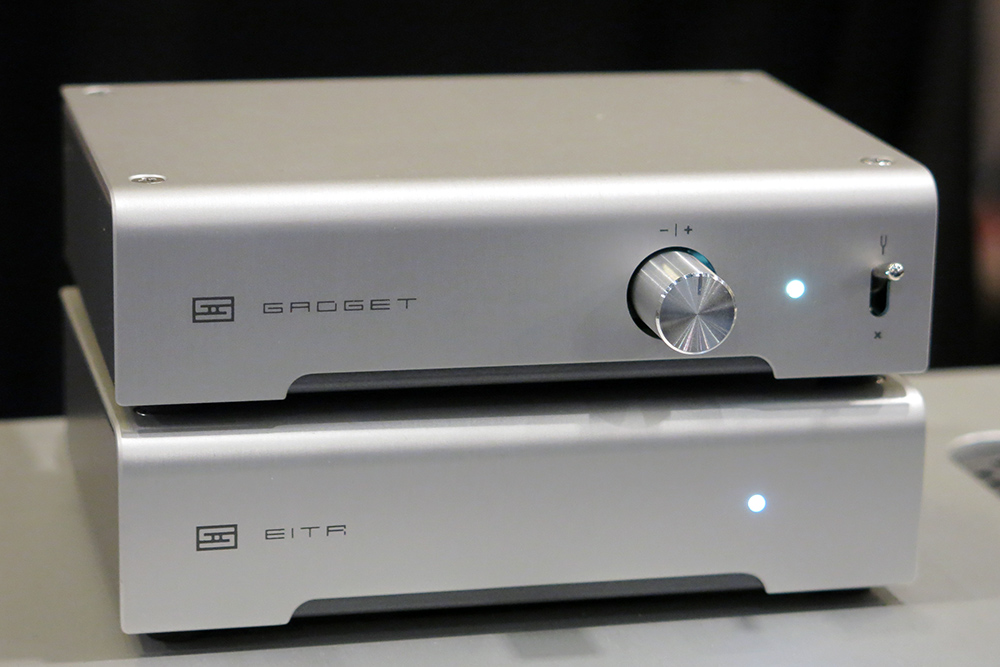 Pardon me for using the phrase “most unique product at RMAF,” but it’s the only one that adequately describes the Schiit Audio Gadget ($199). It’s a DSP-based device that reduces the pitch of music without reducing the speed. The idea is that before instrument tuning was standardized at A440 (musical note A4 at 440Hz) around 1925, lower-pitched tunings were used. The Gadget lets you listen to the music of your choice at these lower tunings. It can bring the pitch down from C262 (middle C at 262Hz) to C240 (or A432). The LED on the front illuminates when the pitch knob is set to the middle (but still detuned) position of C256. The back panel has USB and coax digital inputs that accept PCM signals at resolutions up to 24-bit/192kHz, and there’s a coax output. Listening to a variety of music through the Gadget, I was surprised at how little difference the detuning made in the sound. With some music it was very hard to hear, even though as a double bass player I’ve become pretty sensitive to minor pitch differences. Still, at such a low price it’s cheap fun for audiophiles. And unlike a lot of audio accessories, the Gadget incontestably makes a difference. 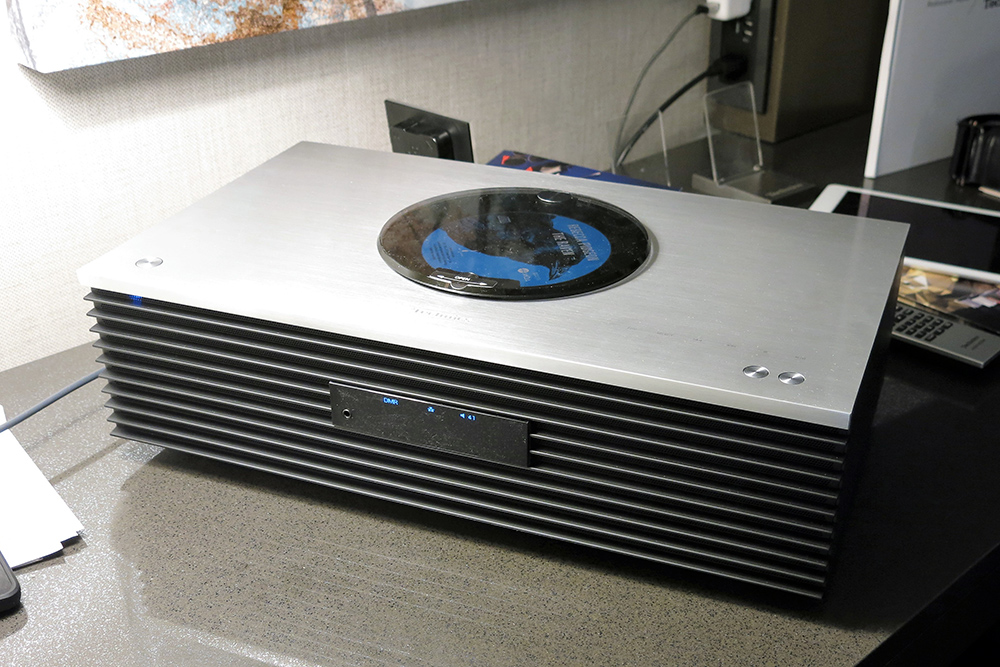 Given the recent focus on wireless speakers, I was surprised to see so few at RMAF. But the Technics SC-C70 ($999) was interesting enough to make up for it. In front are stereo two-way speakers with separate midrange and tweeter drivers, driven by a 25Wpc stereo amp. On bottom is a 4" woofer, powered by a 50W amp. The SC-C70 connects through Wi-Fi and streams files from computers, through Tidal and Spotify, and through Apple AirPlay. It also has Bluetooth. Those who don’t dig all this newfangled digital streaming stuff can find respite in the SC-C70’s integral AM/FM tuner and top-mounted CD player.