Here’s the second part of my coverage of the new audio electronics introduced at the 2017 Rocky Mountain Audio Fest. All prices in USD. 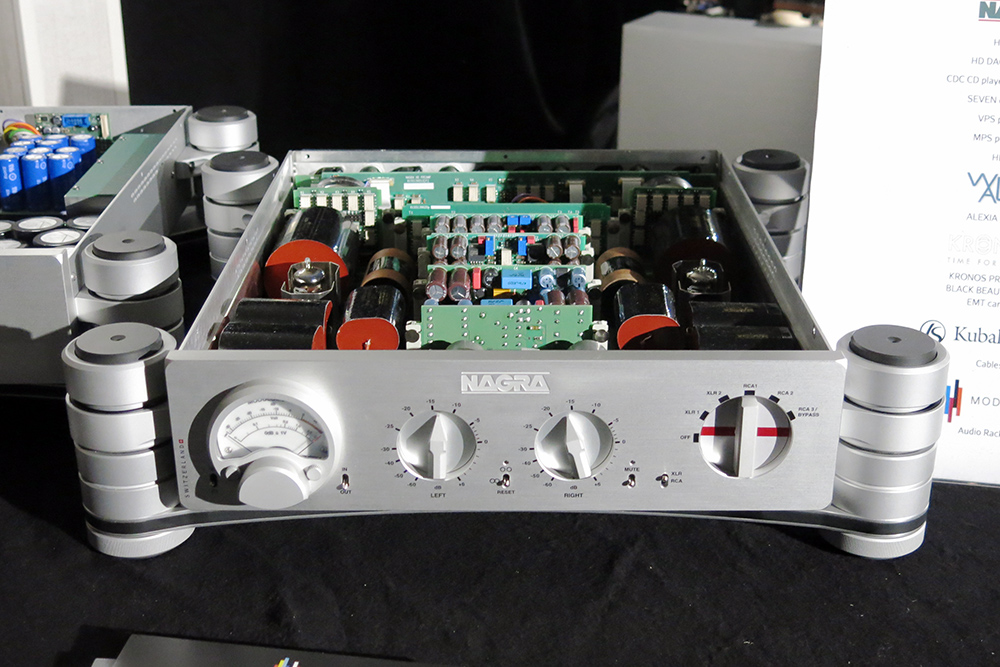 When it comes to ultra-high-end electronics, the Nagra HD Preamp ($59,500) was by far the most exciting new product I saw at RMAF, where it made its US debut. Each channel of the dual-mono preamp incorporates a single tube, and as you can see, the HD Preamp is packed full of large, audiophile-grade capacitors. A separate power supply in a matching chassis provides the juice. It’s a pure analog design, with two unbalanced RCA and two balanced XLR inputs. 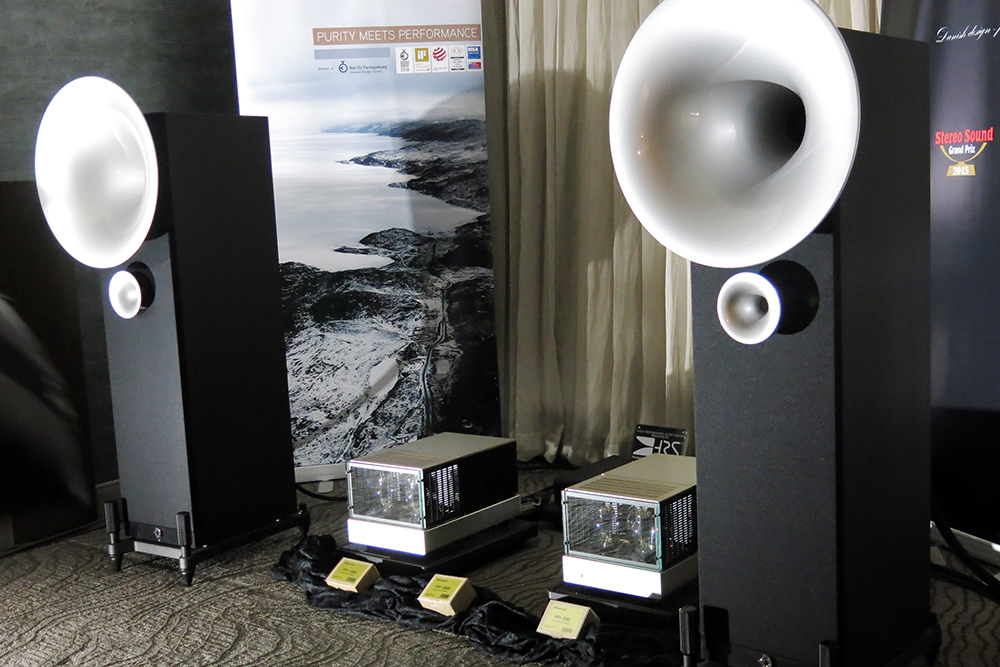 Aficionados of tube amplifiers differ in their opinions of which large output tube is best: the 2A3 or the 300B. The Phasemation MA-2000 ($40,000/pr.) incorporates both, with a 2A3 used as the driver stage for a pair of 300Bs running in parallel single-ended configuration and rated to deliver 25W into 8 ohms. Driving a pair of Avantgarde Acoustic Uno XD speakers, the MA-2000s produced a sound that kept the room packed. 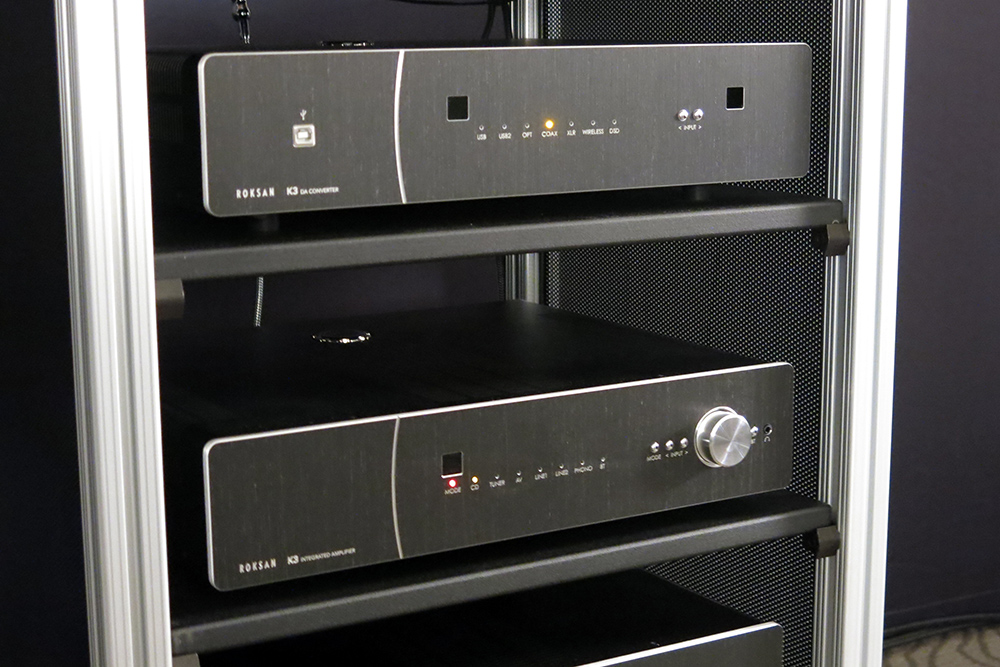 Kevro, best known as North American importer of Monitor Audio speakers, announced that it will be bringing in the elegant, UK-built Roksan electronics line to the US. The K3 DAC ($1999) at top does PCM at resolutions up to 24/192 and DSD at rates up to DSD128 (2x), and has balanced XLR and unbalanced RCA outputs. The K3 integrated amp ($1999) below includes a MM phono input plus Bluetooth and five line-level inputs, and is rated at 140Wpc into 8 ohms. They’re available in three different anodized finishes: Anthracite (light gray), Charcoal (shown here), and Opium (brownish gray). 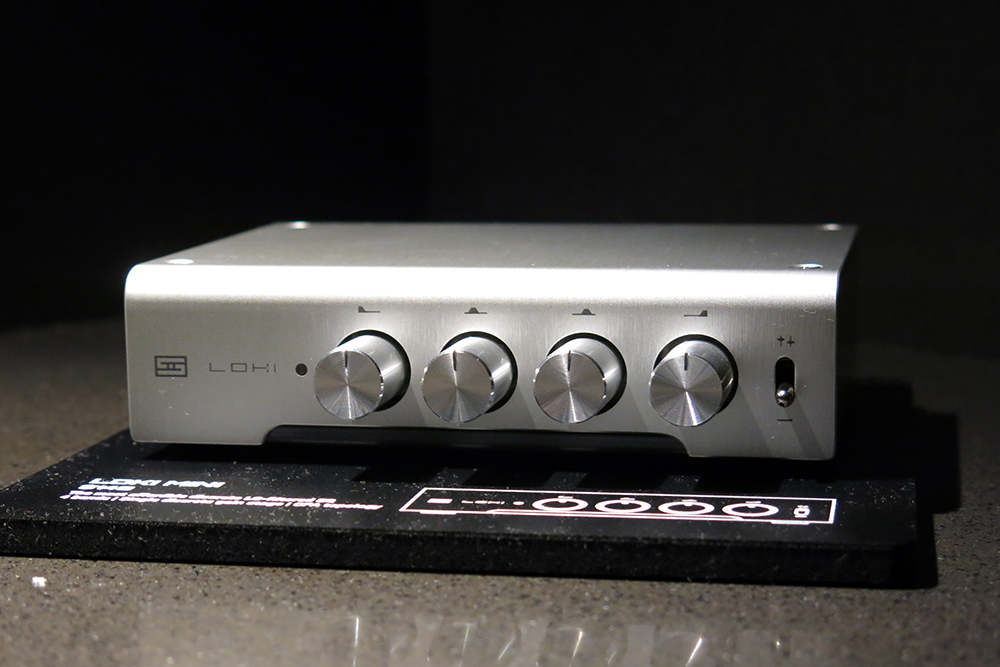 In my opinion, the Schiit Audio Loki Mini ($149) easily ranks among the most useful products introduced at RMAF. It’s a tone control -- or four-band equalizer, if you prefer -- that uses analog filters to provide a wide range of tone adjustment. The frequency centers of the four filter knobs are 20Hz, 400Hz, 2kHz and 8kHz (corresponding to bass, low mid, high mid, and treble), and the adjustment range is ±12dB at 20Hz and 8kHz, and ±6dB at 400Hz and 2kHz -- wise choices because they prevent the user from messing up the midrange as a conventional equalizer can. Stereo RCA analog inputs and outputs are provided on the back. This design should make it easy to tweak your system’s sound to compensate for poor recordings or your own personal taste. 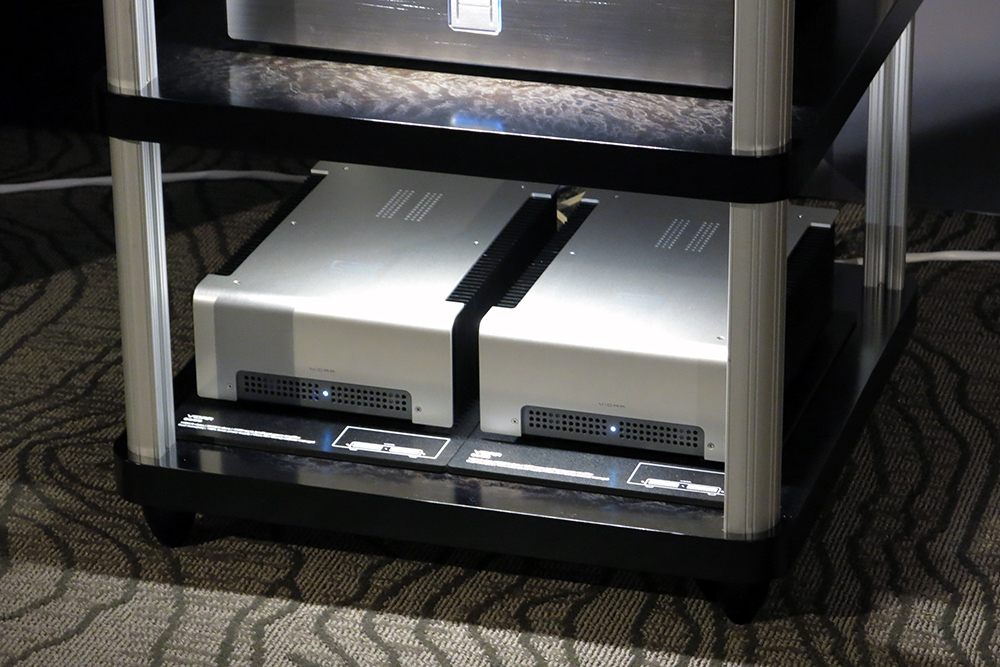 The Vidar ($699) is the first power amplifier from Schiit Audio. That’s a little bit of a surprise considering the company made its name with DACs and headphone amps. It’s also surprisingly traditional, with a class-AB amplifier fed by a conventional linear (i.e., not switching) power supply. Used on its own with its RCA unbalanced inputs, a single Vidar delivers a rated 100Wpc into 8 ohms or 200Wpc into 4 ohms. Used with its single XLR balanced input, the Vidar becomes a 400W monoblock.