It was purely a coincidence. Late in the day on March 21, I had little to do as I walked around the hallways of Hotel Bonaventure, in downtown Montreal, as companies were setting up for Montréal Audio Fest 2019, to be held March 22 to 24. The show was still a day away, so you can imagine that few were ready to showcase anything. I looked in room after room and saw little. Ready to give up and go get something to eat, I opened one last door -- to the room of Motet Distribution, distributor in Canada for at least a half-dozen brands, including the UK’s PMC. When I looked in the room, I saw a crowd of people and someone said, “Come in, you’re just in time.” Little did I know I had just walked into the North American launch of PMC’s Fenestria loudspeaker, a bold statement piece priced in Canada at $90,000 per pair ($65,000 per pair in the US). 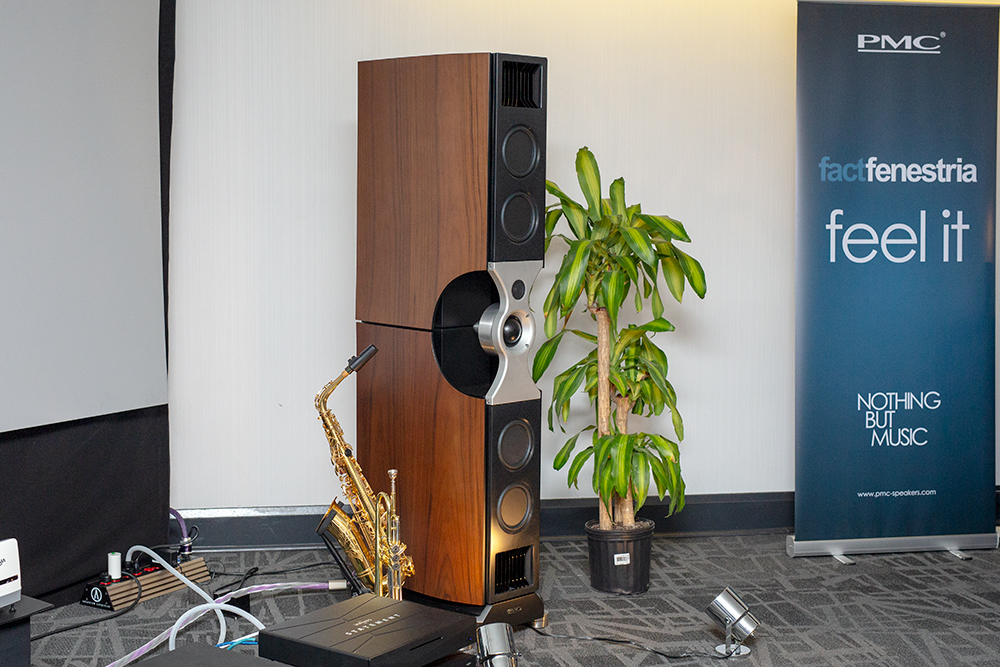 To be clear, the Fenestria isn’t brand-new -- it was introduced at High End 2018 in Munich last May, and it was also shown at Warsaw’s Audio Video Show 2018, which was in November. So to some extent, we’ve featured it before on this site. But with PMC’s export director, Miles Roberts, and creative director, Keith Tonge, in Montreal specifically for this North American launch, I got to learn much more about this speaker than I was able to last year. I liked what I heard, both in terms of what the folks at PMC said and the sound coming out, so I felt it vital to highlight that here.

According to Miles, PMC’s engineering team was given the direction to create a “flagship speaker that would compete with anything out there.” To accomplish this, every part in the loudspeaker is built specifically for this design, and some new technologies were brought in for it.

What didn’t surprise me was when they said that they had created all-new drivers. Any speaker at this price intended to make a performance statement shouldn’t use off-the-shelf drivers that you can find in other speakers, nor should they borrow drivers from the company’s previous designs. After all, if you’re going to claim some new level of performance, then you’d better make everything about it new. The PMC design team seems to have done just that. 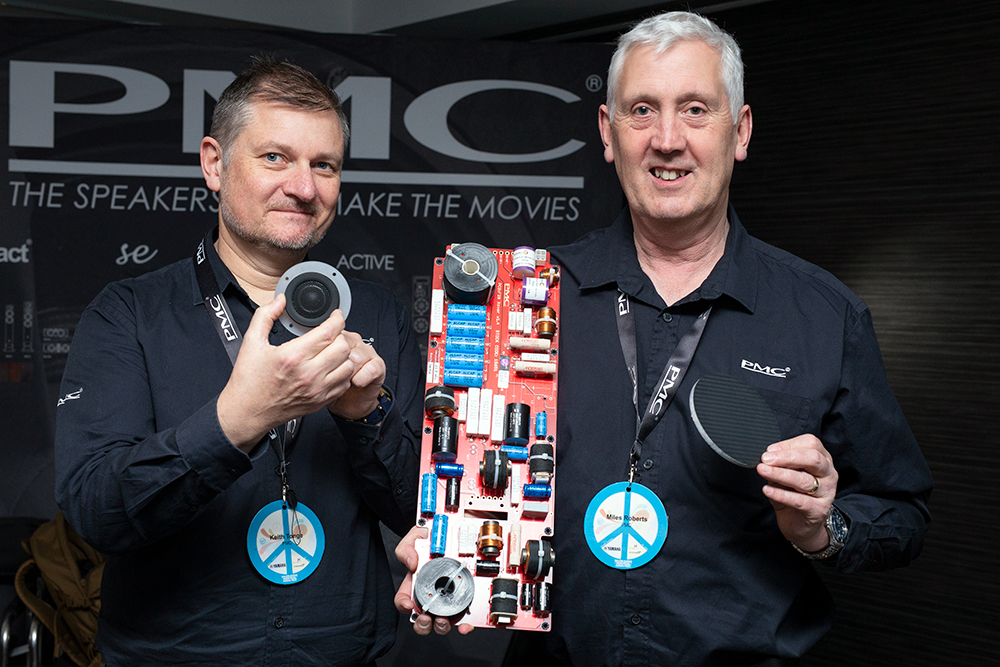 Keith Tonge with a Fenestria tweeter, Miles Roberts with a crossover and a woofer diaphragm

The three-way Fenestria starts with four 6.5" woofers. Each has a roughly 1/4"-thick flat diaphragm comprising a carbon-fiber layer over a foam-type core. The woofers cross over at 380Hz to a 3" soft-dome midrange, which is isolated from the cabinet in a mounting system they informally call a “nest”; more on this below. Handling frequencies above 3.8kHz is a 0.75" Sonomex soft-dome tweeter, with a 1.4" surround, a neodymium magnet, and a special suspension to decouple it from the “nest” that holds the midrange driver. The crossover is massive, mounted into the very bottom of the cabinet to keep it as far away from the drive units as possible.

The woofers are split into two cabinets -- top and bottom, with the split visible behind the “nest.” As in all PMC speakers, transmission-line technology is used to augment the bass -- in this case, with a separate transmission line in each of the two woofer cabinets. The simplest way to explain a transmission line without getting too caught in the weeds is to say that it’s like a really long and complex port. 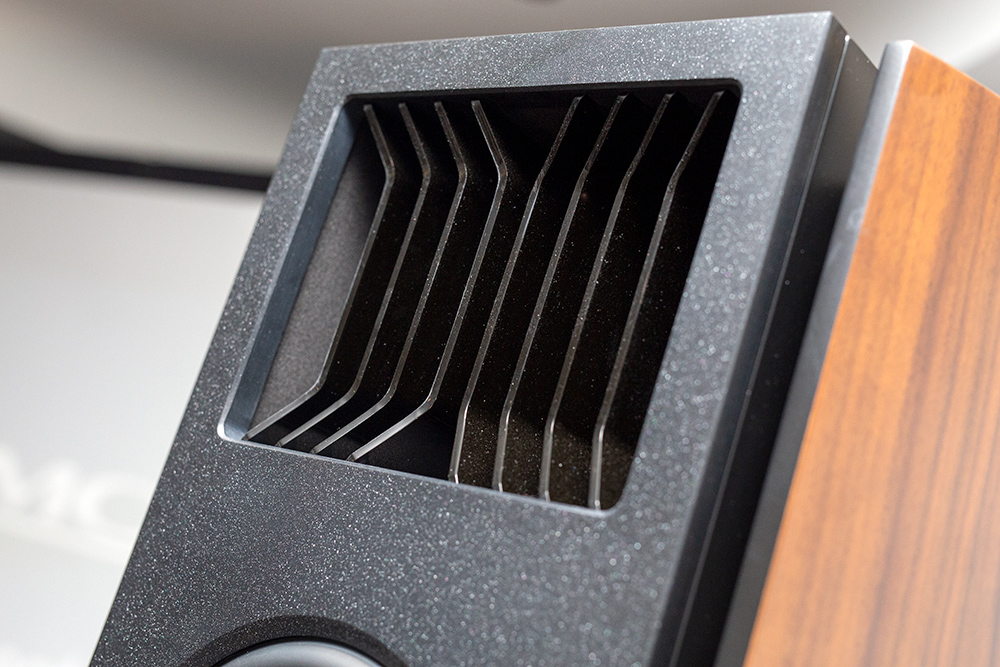 The woofer diaphragm really interested me, so I picked up a sample they had there. It’s extremely light and stiff, but also completely non-resonant when you tap on it. According to Keith Tonge, it maintains perfect pistonic action throughout its frequency range, meaning its shape stays intact the entire time -- it doesn’t flex or deform in any way, which is almost always how you want a driver diaphragm to behave. It also doesn’t appear to resonate wildly, the way many metallic and ceramic materials can. 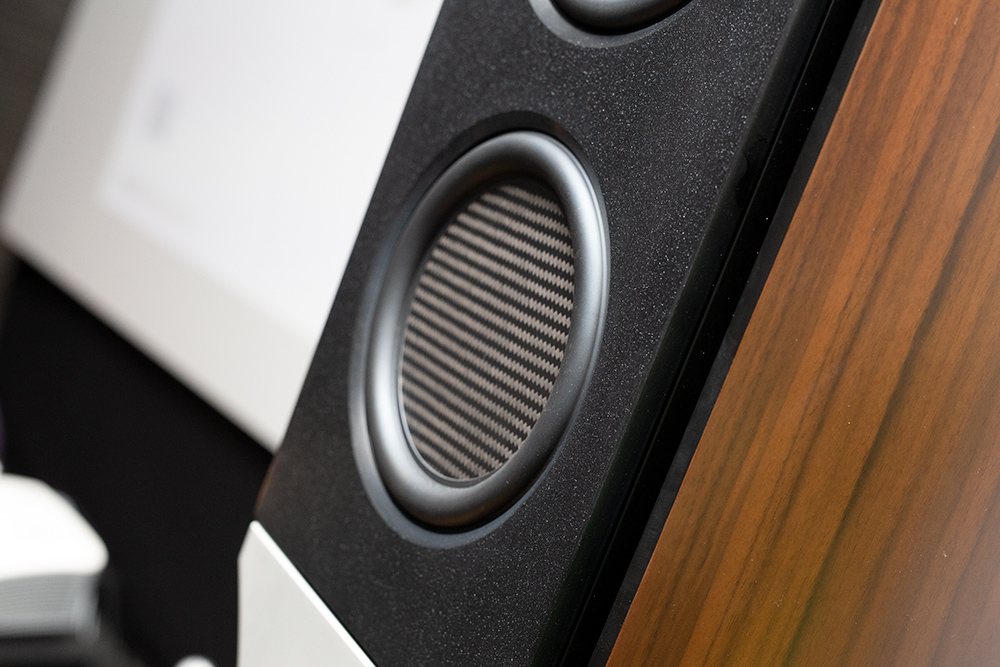 What I didn’t notice when I first saw the Fenestria in Munich and Warsaw was the effort put into minimizing cabinet resonances, because much of it isn’t obvious. To analyze the resonances, PMC used laser interferometry in the anechoic chamber at the UK’s National Physical Laboratory to determine, acoustically, how the cabinet resonances were interfering with the outputs from the drivers. 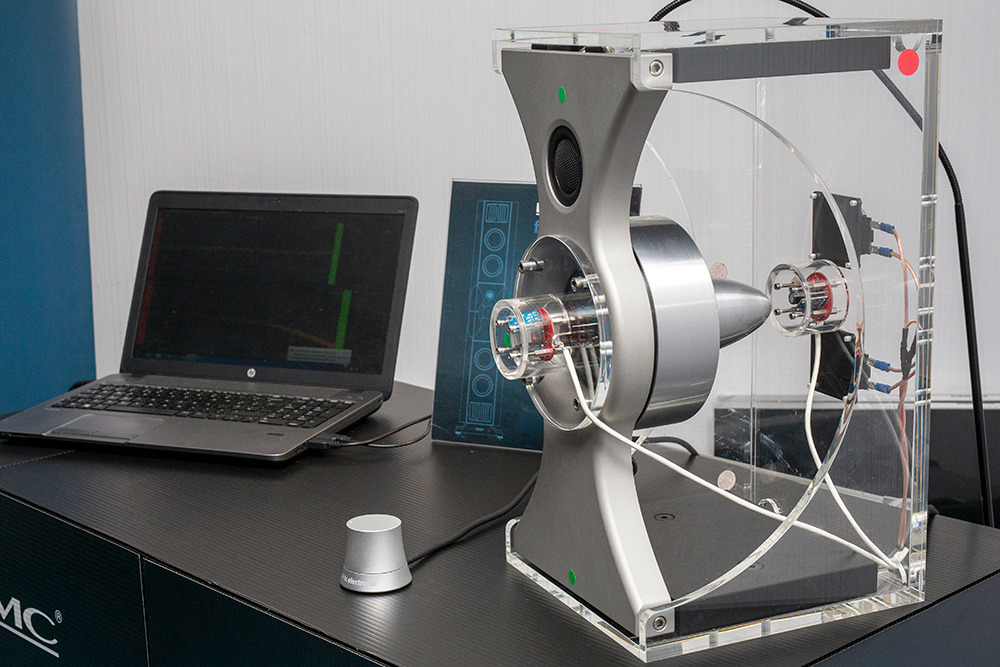 Still more vibration isolation is added for the woofers. The woofers attach to the front baffles on the bass cabinets, but these baffles are also decoupled from each of their cabinets. Miles pulled on one of the baffles and you could see it move. Finally, there are the “wing” side panels -- available in Tiger Ebony, Rich Walnut, and White Silk finishes. These appear to be primarily decorative, but they’re not -- the way they’re mounted to the bass cabinets makes them act as tuned mass dampers, to counteract vibrations in the cabinets themselves.

Miles and Keith talked about the speaker a lot, but as they did, they played music to illustrate the improvements their engineering has achieved. The speakers were driven by a Lumin X1 music server and a brand-new Lumin amplifier, aptly named Amp (160Wpc into 8 ohms, 320Wpc into 4 ohms). The sound of the Fenestrias was remarkable, even under suboptimal show conditions (the big rooms of the Hotel Bonaventure sound rather resonant). The bass was deep, rich, and powerful, easily reaching to 20Hz, the bottom of the audioband. But what PMC wanted us to focus on was the clarity of the midband and highs. Even with deep bass belting out, the frequencies above were always crystal-clear, and so extended that the first descriptors to cross my mind were “feathery” and “delicate.” The Fenestria is a big, bold, powerful-sounding speaker that’s also extremely refined and able to show immense detail. 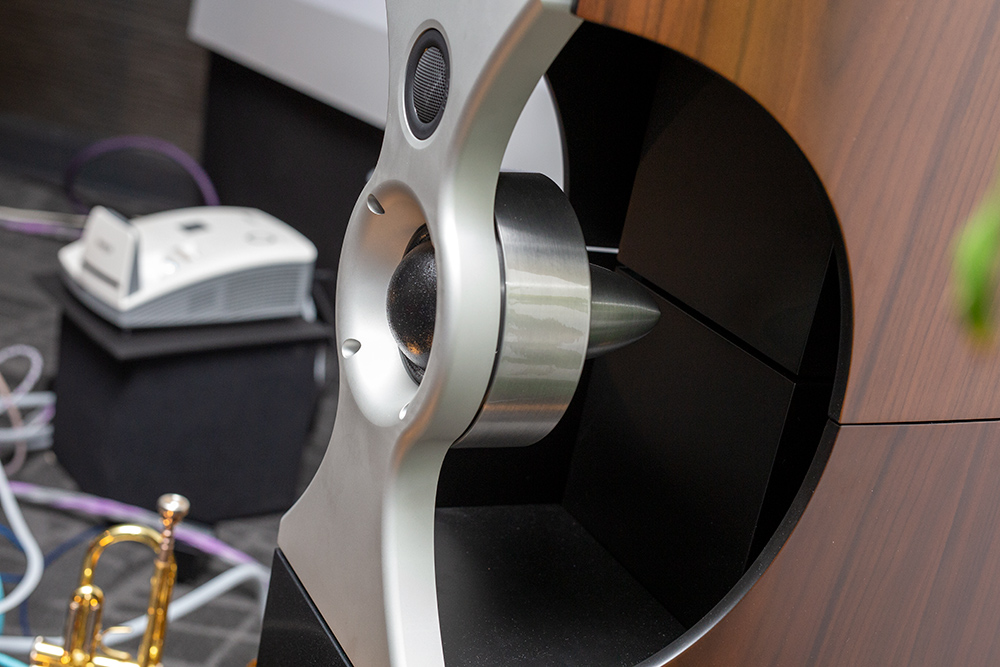 Founded in 1991, PMC stands for Professional Monitor Company. It’s a brand that’s really made its mark with monitors for studios -- you know, the kinds the pros use to make the music and movies you listen to. The Fenestria isn’t their first speaker intended for home use -- they’ve offered consumer products for years, some of which we’ve reviewed on the SoundStage! Network -- but this is their first cost-no-object consumer loudspeaker intended to take on all others, regardless of price. From what I learned and heard in Montreal, the Fenestria certainly deserves to be compared with the best speakers out there. I’m happy I decided to walk into that last room when I did.