Streaming is becoming the default source of music for more and more people. In 2018, streaming accounted for 75% of music-industry revenues in the US, and 46.9% globally. This trend was apparent in many of the new products launched at High End -- all-in-one wireless streaming speakers, amps, and DACs with streaming capability, and active speakers with built-in amplification. All prices are in euros (€) or US dollars ($). 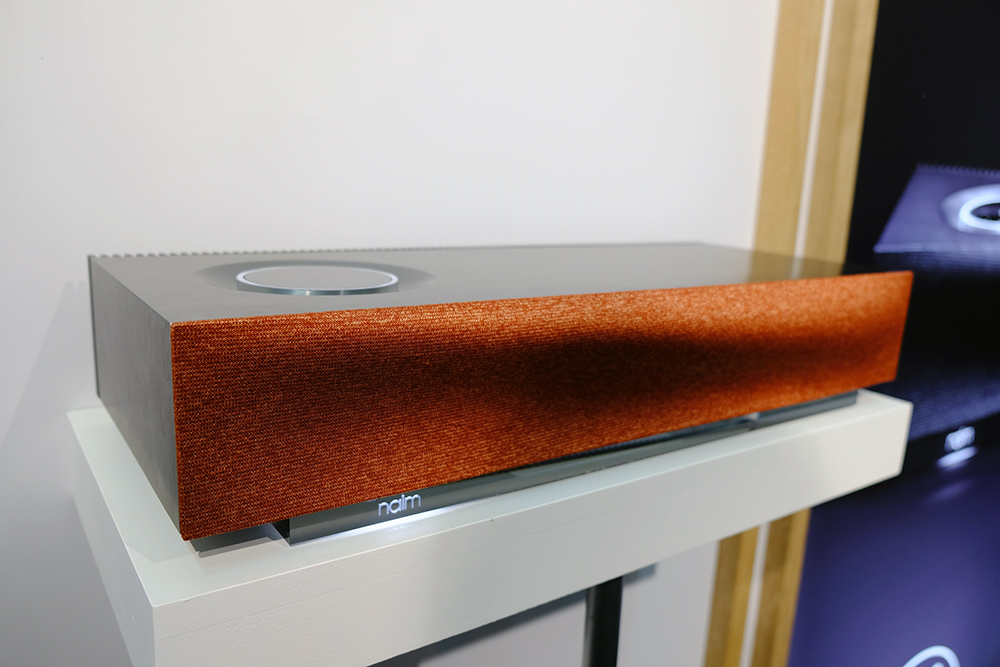 Naim Audio’s big announcement at High End was a new version of its acclaimed Mu-so tabletop music system. The Mu-so 2nd Generation (€1500) looks much the same as the original, but it’s been completely re-engineered. The enclosure is 13% larger than the original Mu-so, and it has enhanced bracing. Like the original, the second-generation Mu-so is a three-way system with dedicated 75W class-D amplifiers for each driver. But the woofer, midrange, and tweeter have been redesigned in conjunction with Naim’s sister company, Focal. The power supply has also been upgraded.

The 16-core digital signal processor in the new Mu-so, rated at 2000 million instructions per second (MIPs), is 13 times more powerful than the single-core 150-MIPs DSP in the original. This enables higher maximum resolution -- 32-bit/384kHz PCM. More importantly, it allows for more sophisticated real-time processing. Bass is elevated at low levels and reduced at high levels, so that there’s no subjective change in tonal balance as volumes change. An app setting that lets users specify whether the Mu-so 2nd Generation is placed near a wall or corner.

There are also major changes in connectivity. The new Mu-so has dual-band Wi-Fi with 802.11ac support and Bluetooth 4.2. In addition to TosLink and 3.5mm analog inputs, the Mu-so 2nd Generation has an HDMI-ARC input for home-theater use. It supports a wide variety of streaming protocols, including AirPlay 2, Chromecast Built-in, and Spotify Connect, and can be operated by voice via Apple Siri or Google Assistant.

Naim also redesigned the user interface, with preset favorites and activities now selectable from the slick rotary dial on the top.

As for the sound, it was fantastic. Streaming “Blue Monk” from the Chick Corea Trio’s live album Trilogy via Tidal, I was struck by the portrayal of Christian McBride’s upright bass -- which had far more depth and impact than I could have imagined coming from a tabletop music system. This thing is the real deal. 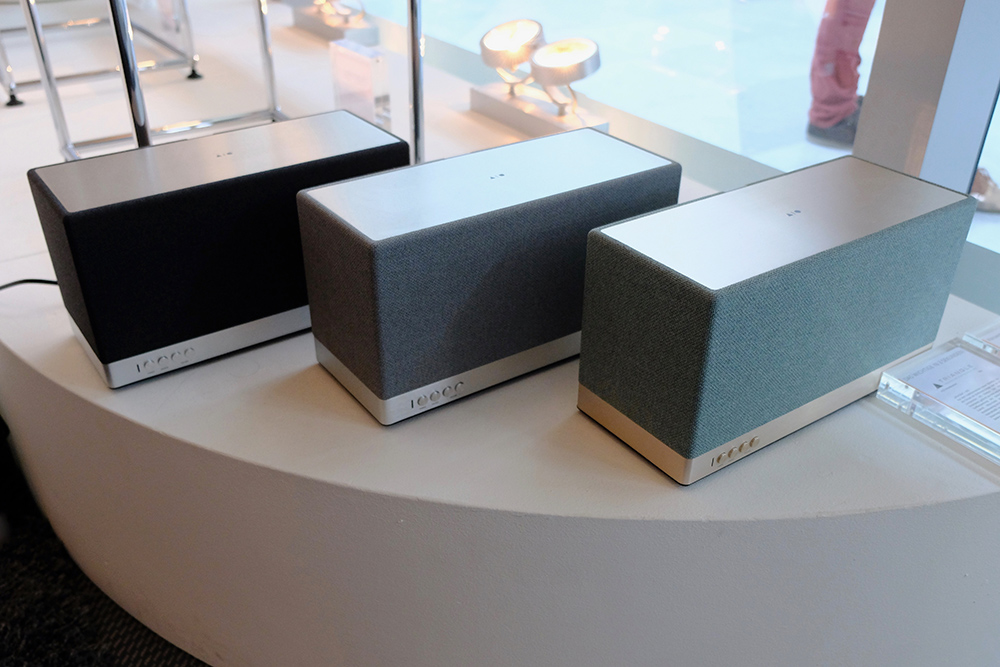 The French speaker manufacturer Triangle is entering the whole-home music fray with its new AIO 3 tabletop speaker ($699), which has Bluetooth and Wi-Fi connectivity, along with TosLink digital and 3.5mm analog inputs. The AIO 3 has lovely retro styling, with a metal-clad MDF enclosure and vintage cloth grilles available in black, blue, gray, and green. Each speaker houses two 3.9" woofers and two 1" tweeters, powered by a 45Wpc amp. Two AIO 3s can be paired for stereo operation, and multiple units can be grouped for whole-home music under control of an app that runs on iOS and Android. Maximum resolution is 24/192 PCM. 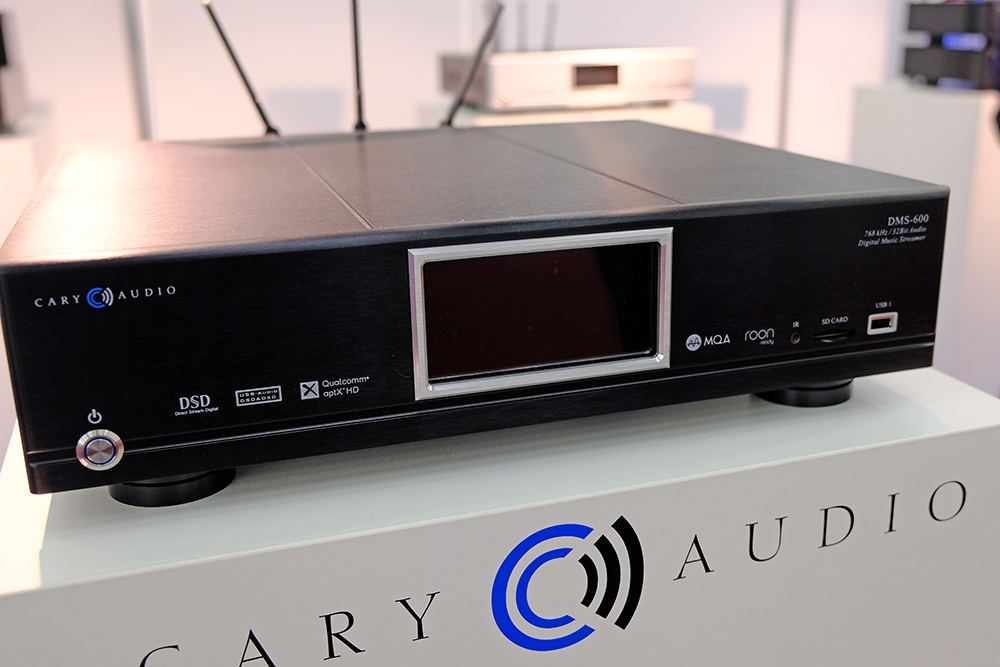 The American brand Cary Audio introduced two new streaming DACs at High End -- the DMS600 (shown above) at $6995 and DMS550 at $5495. Both models are Roon Ready, and both have MQA hardware decoding. Input options include USB, AES/EBU, TosLink, S/PDIF, and aptX HD-capable Bluetooth. Both products have Ethernet and Wi-Fi connectivity, with 802.11ac support, and both can stream from services such as Tidal and Qobuz, under control of a companion app, available for both iOS and Android. Maximum resolution is 32-bit/768kHz PCM and DSD512 via USB. The DMS 600 employs AKM’s flagship DAC, the 4497EQ Veritas, while the DMS 550 uses the 4493EQ Velvet. The DMS 600 also has heavier shielding. 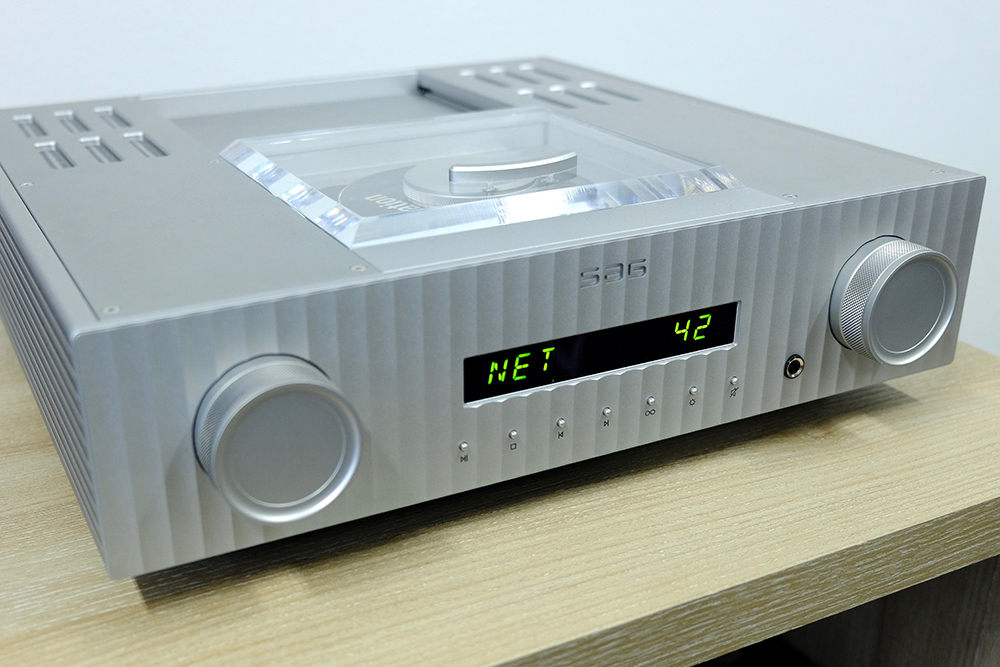 Simon Audio Lab, from Korea, is a new brand to me, but its AIO (All-in-One) music center looks like a pretty compelling product. It incorporates a top-loading CD player, FM tuner, USB DAC, network player, and 100Wpc class-AB amp in a very attractive package. Maximum resolution is 32-bit/384kHz PCM; DSD is also supported. The AIO has Ethernet and Wi-Fi connectivity, and it supports DLNA streaming. Other input options include line-level balanced and RCA, S/PDIF coaxial, TosLink, and apt-X Bluetooth. It sounded impressively dynamic and articulate playing through a pair of Courbet No. 3 shelf-mount speakers from Davis Acoustics. 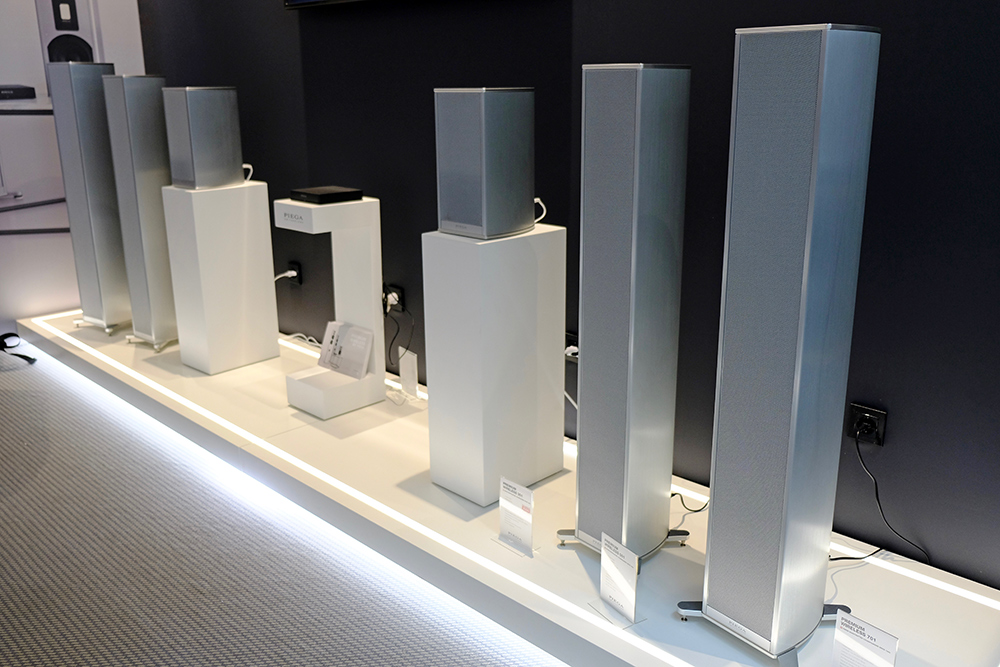 During High End 2019 I came across several new active and powered speaker systems from European manufacturers. These included the Swiss brand Piega, whose Premium Wireless series of powered speakers use the same drivers and aluminum enclosures as the Premium-series passive speakers on which they’re based. They’re available in silver, white, and black finishes. 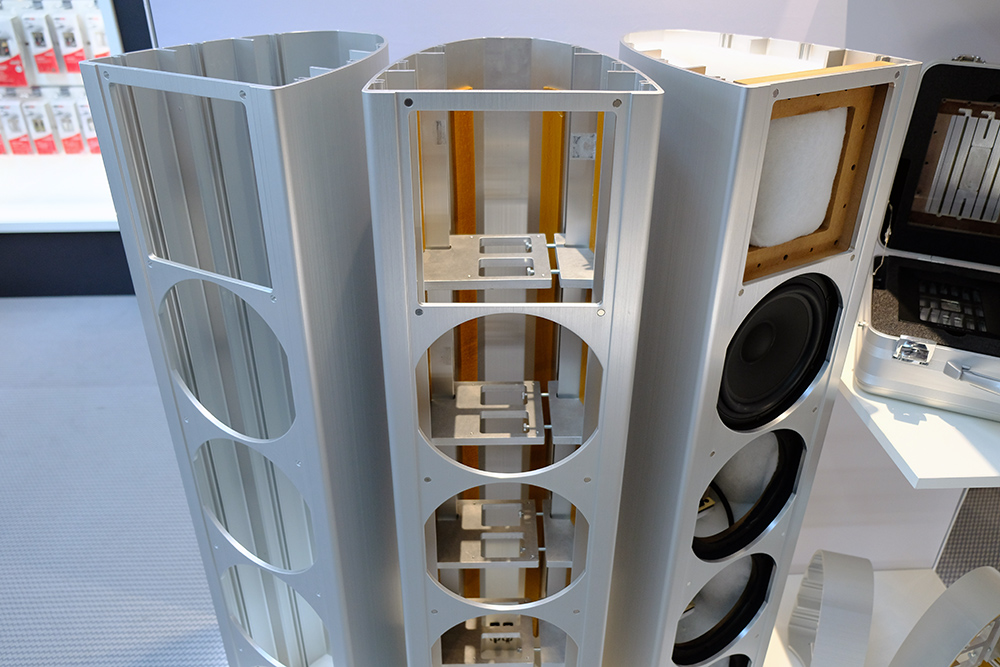 They’re intended for use with Piega’s Connect module, which uses the ClearNet protocol to send digital audio, at resolution up to 24/96, to the speakers. The module has analog and optical inputs, along with Bluetooth aptX. However, it does not have Wi-Fi or support for streaming services. For that capability, you have to add a device like a Sonos Connect or Bluesound Node 2i streamer. 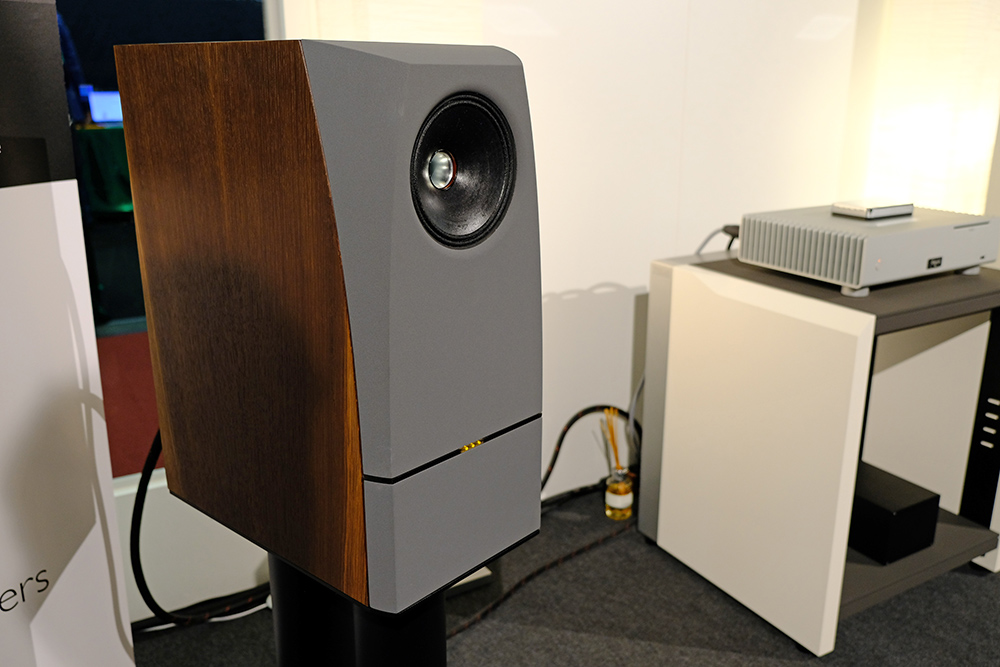 Genuin Audio, based in Germany, showed its new Ava DSP-controlled shelf-mount active speakers (€19,990/pr.), which are a smaller version of the Neo active floorstanding speakers (€24,900/pr.) it showed last year in Munich. Each Ava enclosure houses a front-firing coaxial driver with a 6.5" midrange and a 1" tweeter, along with a side-firing 8" long-excursion woofer with a 2" voice coil, powered by a four-channel 1000W UMAC class-D amplifier module. The DSP performs crossover filtering, time correction, and room correction, with settings for open, corner, and wall placement. Each driver is measured at the factory, and the DSP is configured for the individual driver’s performance.

I sat in on a demo where “Land of the Free” by the Killers was played from Genuin Audio’s Tars music server, and I was completely blown away. The kick drum had huge impact -- the air just exploded into the room without a hint of overhang. The soundstage was amazingly large and open. These things are stunningly good.