These days, many audiophiles prefer to hide away their electronics where no one can see them. Either that, or they want those huge enclosures out front and center as talking points when someone enters the room. A company from the Netherlands presented another option . . . 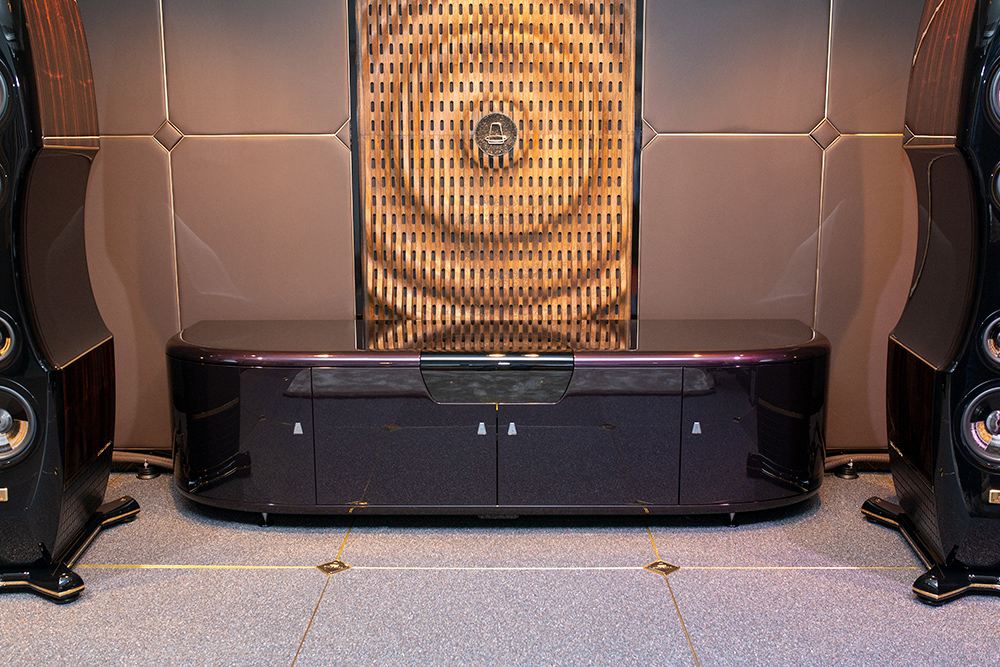 The Kharma Elegance Visionair component cabinet includes four mono amplifiers (500W) integrated into it -- the cabinet is huge and will be the centerpiece of most any room -- but the actual electronics are hidden inside the ends of the cabinet. Why four amps? For powering a biamplified system, naturally. Though the end compartments are filled with amplifiers, a space in the center -- with an included shelf -- is available for placing smaller components, such as a preamp or CD transport (sold separately). The Visionair is available in any color at time of order, including one to match your Kharma speakers, which it would probably be powering. The price is €70,000. 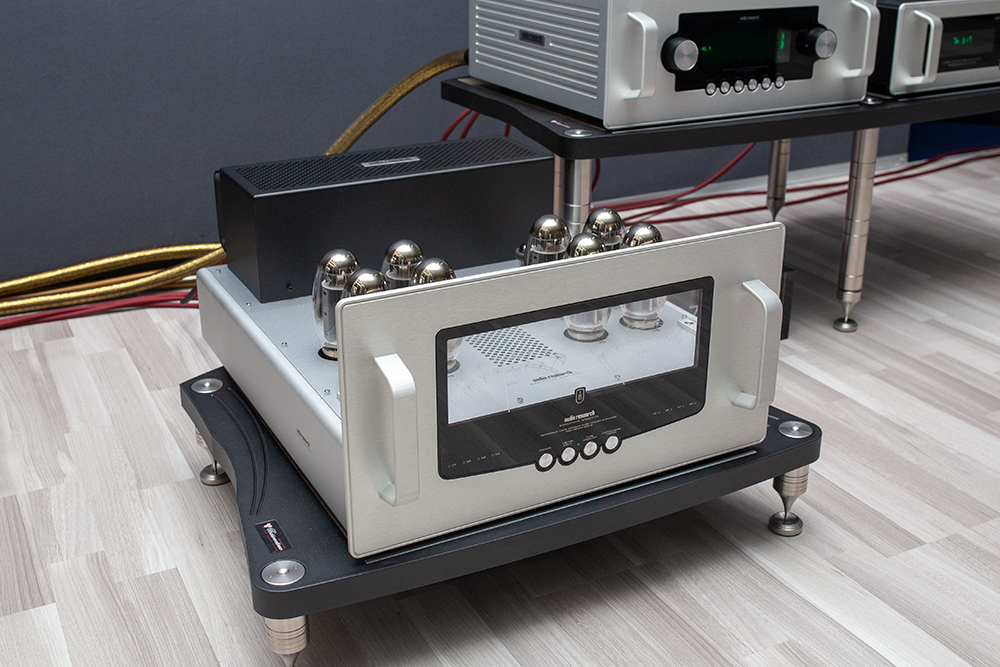 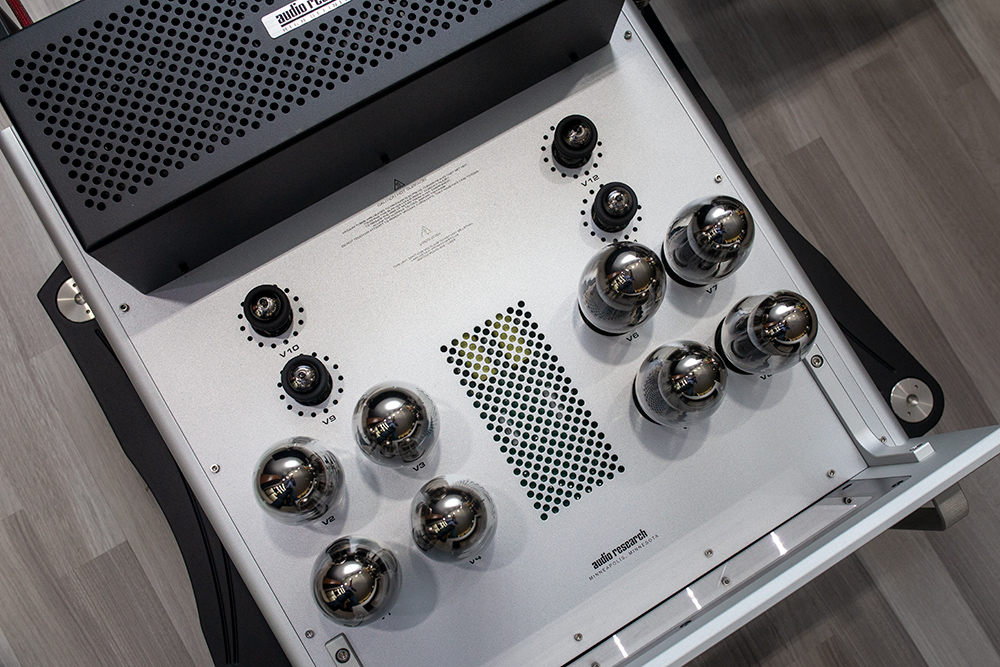 . . . eight KT150 power output tubes. Features include switchable triode or ultralinear modes of operation, a proprietary auto-bias circuit, balanced and single-ended inputs, and a monitoring mode for the output tubes. Of course, there are also the cool transparent meters, a design cue that first showed up on the 160M. The Reference 160S is expected to ship in Q3 of this year, and the price is TBA. 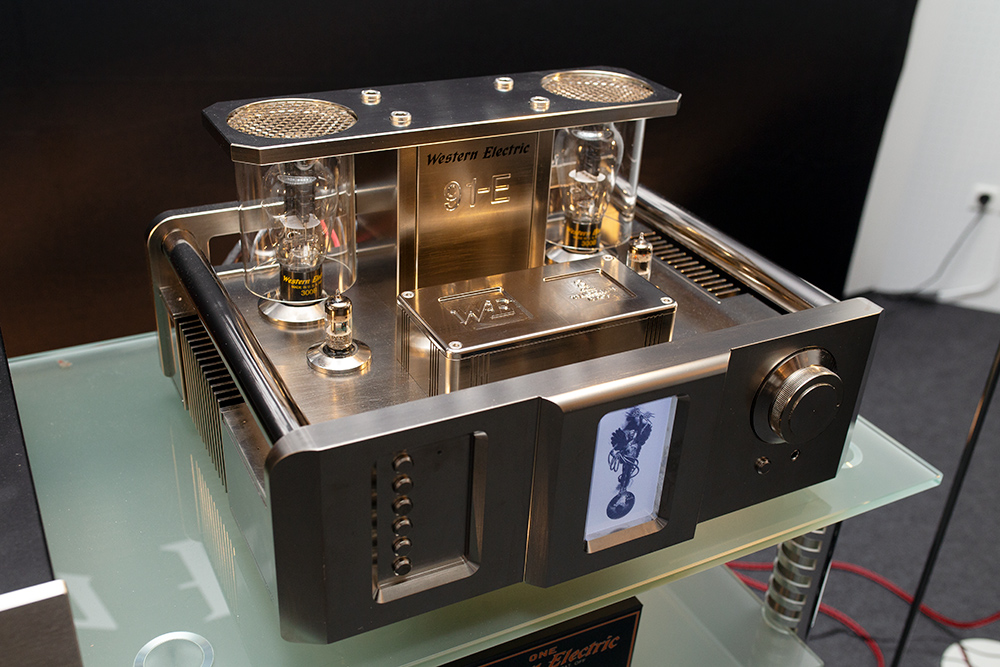 The Western Electric 91E integrated amplifier has been shown in prototype form at previous shows, but we learned that the “final build” is now done and the 91E will be ready for shipment in October. The 91E is a single-ended design based on . . . 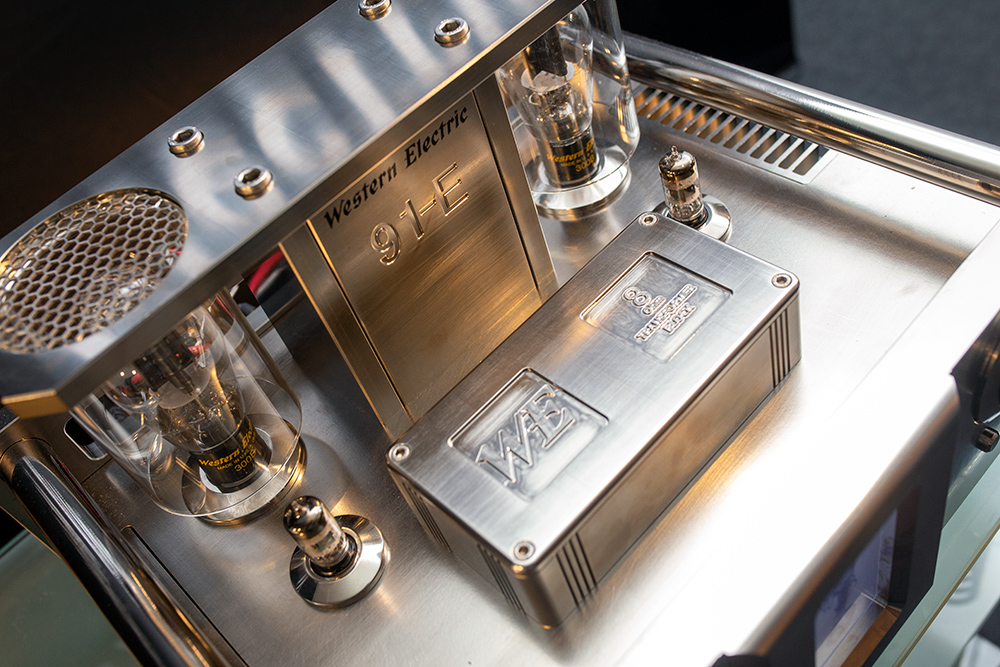 . . . the 300B tube, and it’s rated to produce “over 20 watts per channel.” The inputs include four sets of RCA inputs and one phono input (MM or MC) -- but perhaps most surprising is that it’s even Bluetooth capable. The TFT display on the front provides readout for critical functions, and the nickel-plated handles add a touch of luxury. The price of the 91E is $12,500, surprisingly affordable for all it seemingly offers. 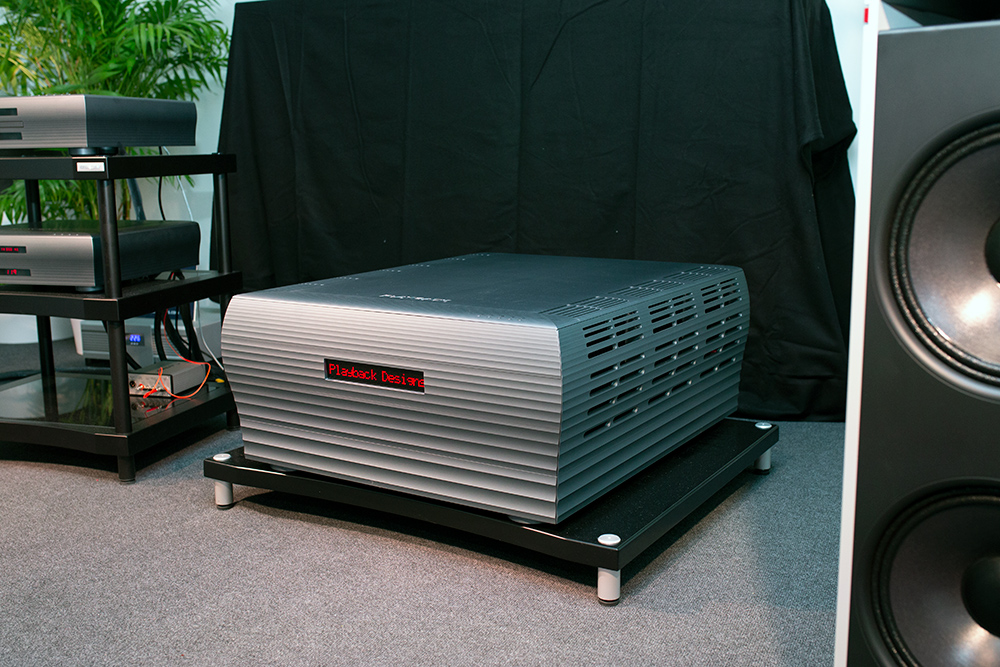 Playback Designs introduced what was undoubtedly the largest stereo power amplifier at High End. The SPA-8 is part of the company’s Dream Series product line and is rated to deliver 1600Wpc into 4 ohms and 150A of peak current per channel. The SPA-8 will reportedly drive any loudspeaker -- any -- according to company representatives. Internally, there are 20 200W ON Semiconductor ThermalTrak output devices per channel, two 1800W toroidal transformers, and 294,000 microfarads of capacitance. The beast weighs 286 pounds. The price is expected to be between $50,000 and $60,000 when it is available later in the year. 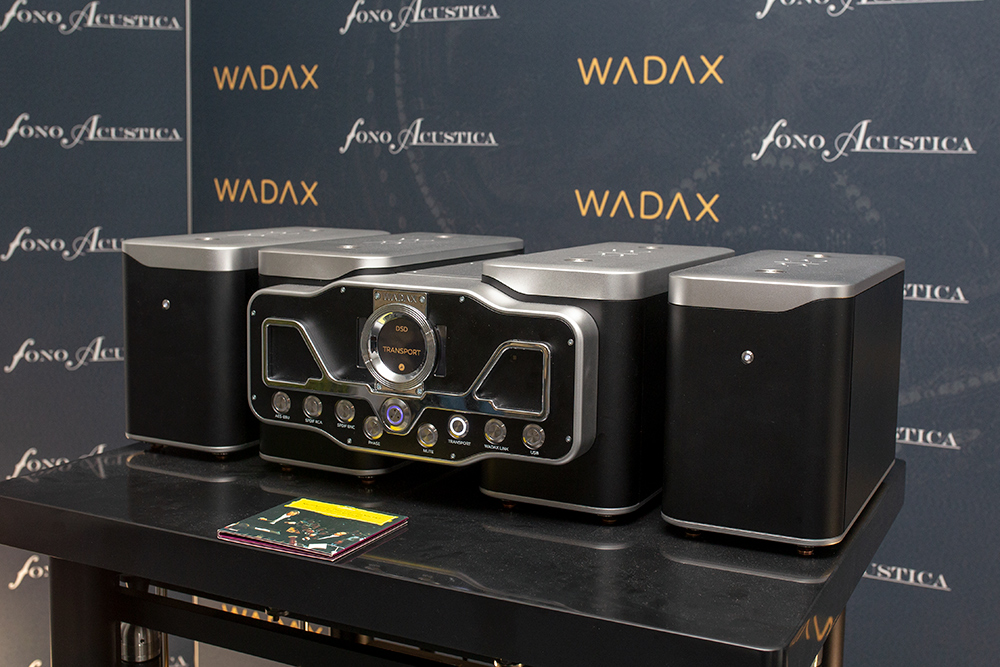 The unique-looking Wadax Atlantis Reference DAC is a multi-chassis affair that sports some significant design features, such as the company’s MusIC. Wadax says that the MusIC process, a feed-forward error-correction system, uses Adaptive Delta Hilbert Mapping to correct time and phase errors produced by the DAC chip. The Atlantis Reference also has a Zepto Reference clock that reportedly reduces jitter down to 12 femtoseconds. Other features include a massive power supply, extensive mechanical isolation, 23 individual circuit boards, and 5500 discrete parts. A 5" touchscreen display and all the connectivity you would expect in a product this ambitious round out the feature set on the largest DAC we’ve ever seen. The price is €110,000. 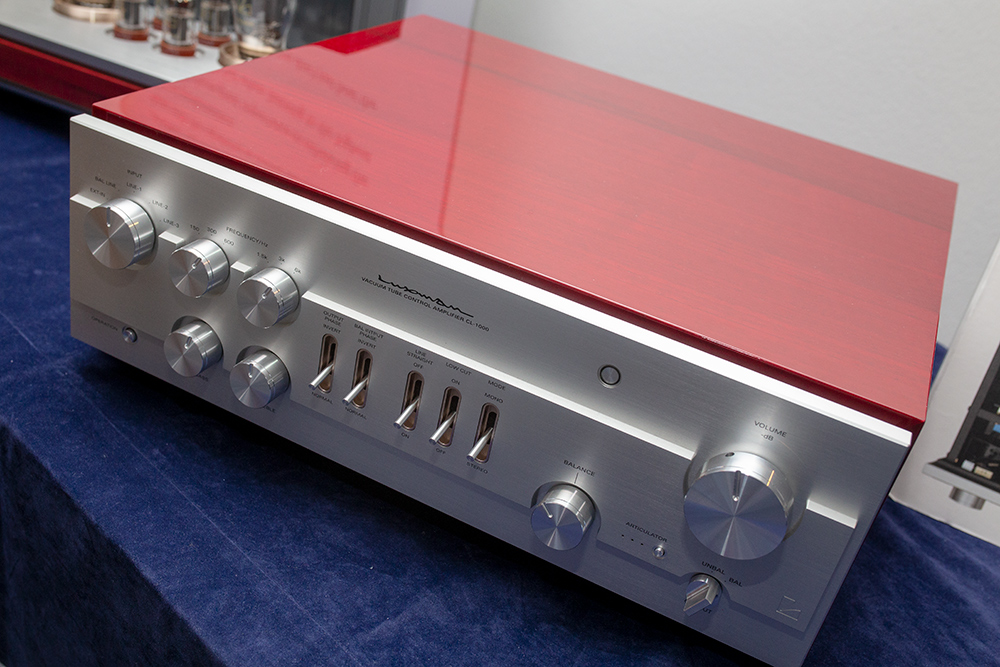 The Luxman CL-1000 is the company’s new flagship tubed preamplifier -- or control amplifier, as Luxman calls it. A company representative told me that the designers did not want to use any resistors in the signal path of the CL-1000 and, therefore, developed a new volume control for the unit that is extremely transparent. We could not help but notice the beautiful . . . 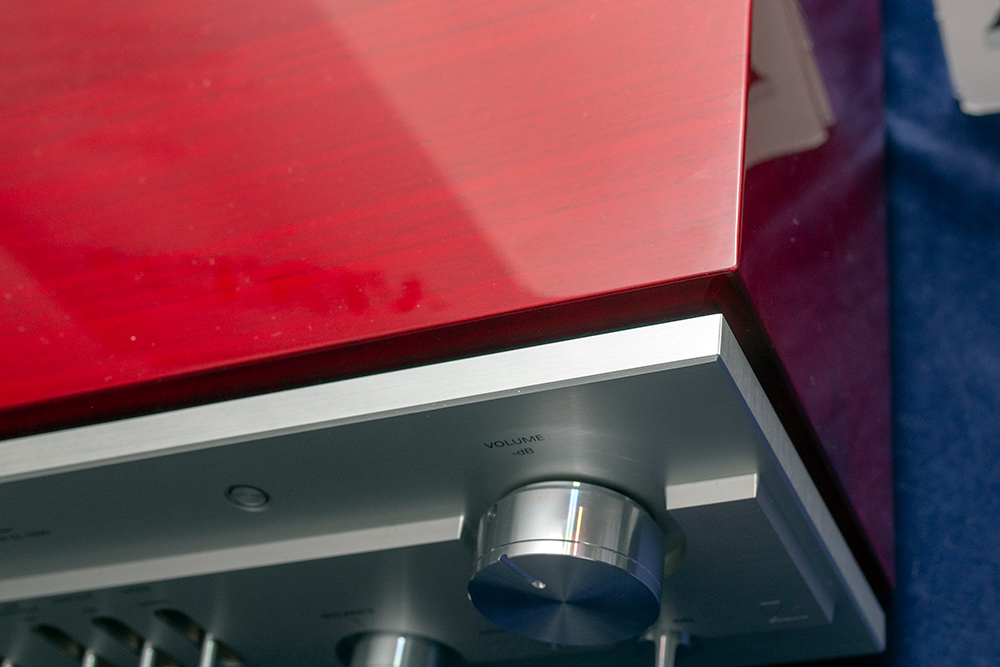 . . . wood finish, which gives it a striking appearance. Although the CL-1000 was just launched in Japan -- so exact pricing has not been set -- we learned that the projected price is €18,000. 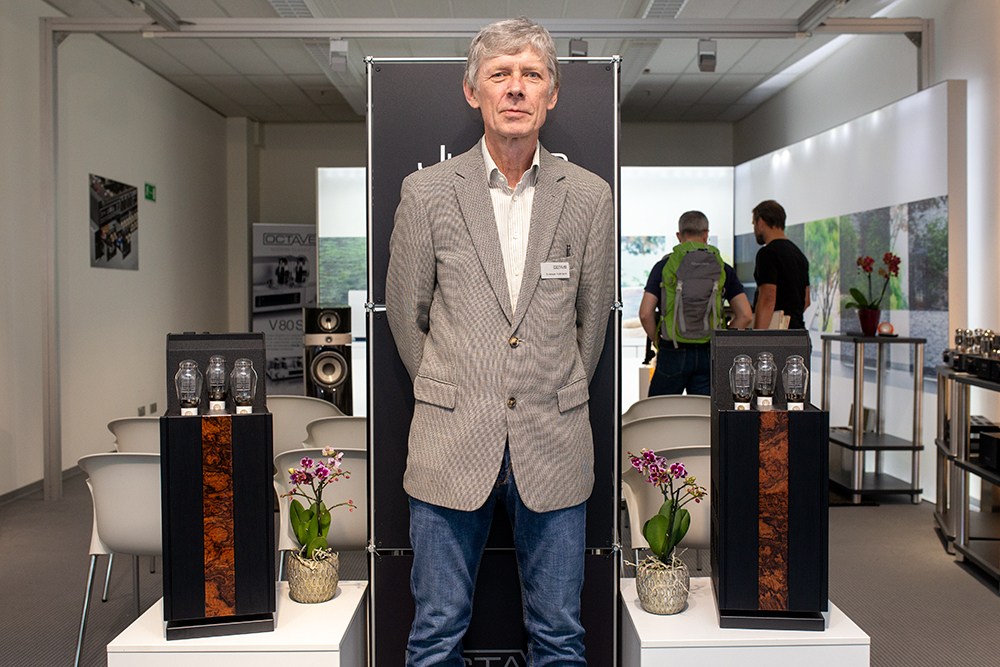 The Octave Jubilee 300 B mono amplifier (shown with founder Roland Hoffman) has been updated for 2019, and there are lots of improvements: it now has a regulated electronic power supply instead of a choke power supply, and it includes an energy management system to extend the life of the tubes. Power output is selectable between 15W and 30W. The tube complement consists of three 300Bs, one ECC82, and one EF800 per monoblock. Octave says that it has developed a 7Hz power generator that supplies the 300B tubes with a regulated 7Hz pure sine wave heating voltage -- this reportedly makes it possible to connect several 300B tubes in parallel. According to Octave, this arrangement gets the best performance out of the 300B. The price of the Jubilee 300 B is €54,000/pair.